With the SHOWTIME app, you can stream entire seasons, star-studded movies, groundbreaking documentaries, comedy, sports (including SHOWTIME Championship Boxing), and much more – all commercial-free. Watch all the latest episodes of your favorite shows whenever and wherever you are – live or on demand. New titles added all the time so there’s always something great to watch. On the go? Download full episodes and movies and watch offline. No cable subscription needed! Simply download the SHOWTIME app to sign up for your free trial, then only $10.99/month. Create your account and start streaming on your favorite phone, tablet, connected TV, gaming console or on your computer by visiting Showtime.com. Cancel anytime. The SHOWTIME app is a standalone streaming service that enables anyone with a high-speed internet connection in the U.S. to sign up for SHOWTIME. *You will not be charged for the SHOWTIME streaming service during the free trial period. TO CANCEL YOUR SUBSCRIPTION AND AVOID BEING CHARGED, YOU MUST CANCEL BEFORE THE END OF THE FREE TRIAL PERIOD. To keep your subscription once your trial period is over, you will not have to do anything. • Payment will be charged to iTunes Account at confirmation of purchase • Subscription automatically renews unless auto-renew is turned off at least 24-hours before the end of the current period • Account will be charged for renewal within 24-hours prior to the end of the current period, and identify the cost of the renewal • Subscriptions may be managed by the user and auto-renewal may be turned off by going to the user's Account Settings after purchase • Any unused portion of a free trial period, if offered, will be forfeited when the user purchases a subscription to that publication, where applicable https://www.showtime.com/#privacy https://www.showtime.com/#termsAndConditions California Privacy/Info We Collect https://www.showtime.com/#privacy/california Do Not Sell My Personal Information https://ca.privacy.cbs/donotsell © 2020 Showtime Digital Inc. All rights reserved. SHOWTIME is accessible for viewing solely in the United States and its territories and possessions with a high-speed broadband connection. Minimum 3G connection is required for viewing on mobile devices. Free trial is available to new customers only. 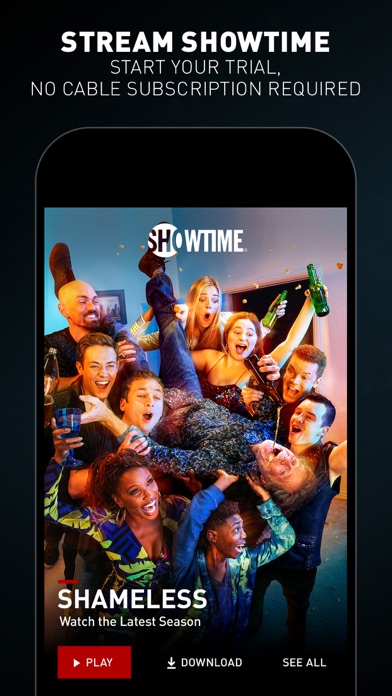 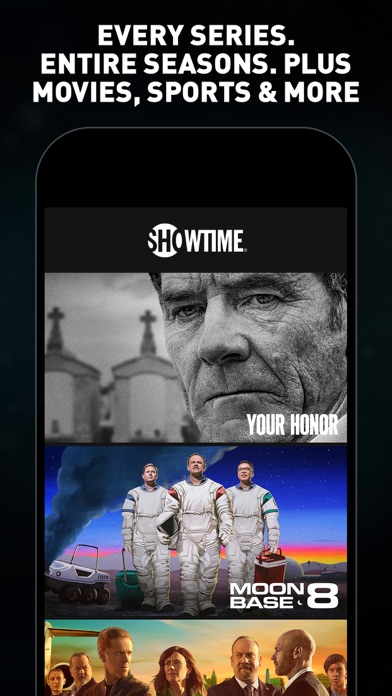 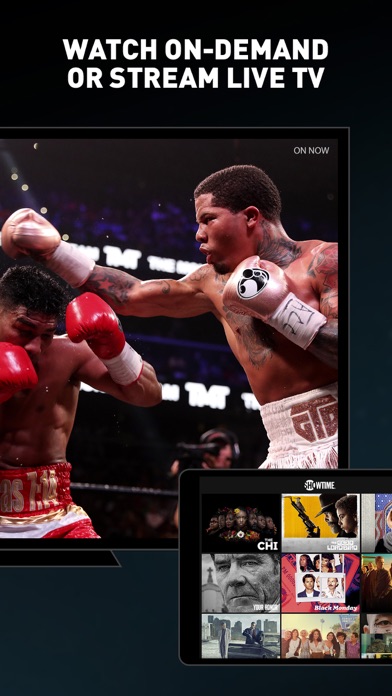 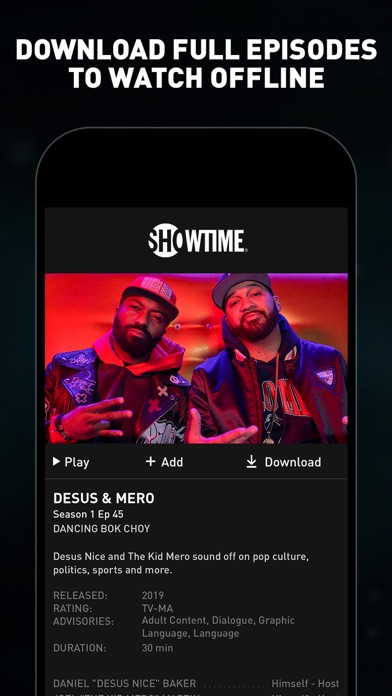 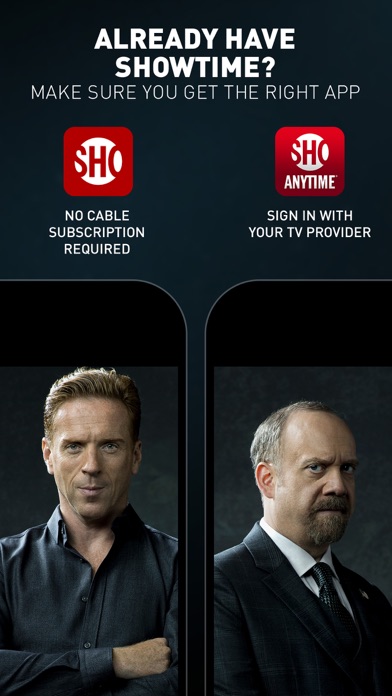 The app has some usability issues. The menu system is clunky and confusing. On iPhone 12 it only does landscape to one side only for some reason. It also does not save your position so if you lock your phone and go back to it without even closing the app it resets to the beginning of the movie/show. I got this on a trial to test it out. I will not be purchasing until these issues are rectified. I very much enjoy the showtime originals though.
By Stinkfist570

Well guys, I’m generally happy - especially that Pros: - the iPhone app casts to Chromecast. - The app starts quickly, and - I can switch programs in my list easily with a tap. Con: My home Internet and WiFi are relatively swift and uncluttered with other users. Only my phone, the Chromecast gizmo (WiFi) and the big computer upstairs (cabled to the modem/WAP). The programming inexplicably hangs up over and over - no matter what I’m watching - and it’s annoying. I’m super glad this mostly works at all though, and I can get and binge my fave program(s). Thanks!
By Firehawk0477

There’s no skip intro, you can’t see what you’re skipping when you fast forward, where is the subtitles when watching on a television?? Good shows but these tiny things are VERY VERY frustrating!!!
By Lee802

Too much political propaganda/has some good shows

Contributes to the “civil war” going on on in this country. More disinformation; Incites more violence. I find the political promos very disturbing. Because of that I only sign up for a month. Periodically .
By gspgal

Always lags and is so slow to load. It’s consistently slow and is such a disappointment. Horrible interface
By billengvall

No one wants to join in progress for an already filmed show. You’d want to watch the circus from the beginning.
By Bradley Maskell

I downloaded this to see if I can watch movies or shows I couldn’t before but when I clicked on the app when it was done downloading it said I had to pay 10$ a month not only that but it said I had to sign in and I don’t even have a account, the app won’t let me creat one. Fix this, it’s horrible I hate apps like this!
By Dawn_TA

I subscribe to the showtime app, but it does not play Shameless episodes past season 11, episode 3
By tomijohn

shameless season 11 sucked 😂😂 we do not feature trash movies showtime