KAPOW! Jack the rabbit bursts into the sky as the Sago Mini Superhero! Fly with Jack as he lifts impossible weights, powers up on carrots and makes things right in the city. Whether he is helping ducks cross the street or sharing ice cream with an octopus, Jack is here to save the day! Perfect for little superheroes everywhere, Sago Mini Superhero encourages exploration and helpfulness, along with a good dose of silly. Toddlers and parents alike will love this exciting new addition to the award-winning suite of Sago Mini apps. With no in-app purchases or third party advertising, these open-ended play experiences are the perfect starter apps for little ones. Features • Use your finger to fly Super-Jack through the big city • Guide Jack to the yellow markers to uncover fun animations • Discover with Jack as he helps his friends • More than 30 fun animations to discover • Make up stories to go with the actions • Recommended for toddlers, age 2-4 years • Play without wi-fi or internet • No in-app purchases or third-party advertising, so you and your child are free to discover without interruptions! Sago Mini is an award-winning company devoted to play. We make apps and toys for preschoolers worldwide. Toys that seed imagination and grow wonder. We bring thoughtful design to life. For kids. For parents. For giggles. 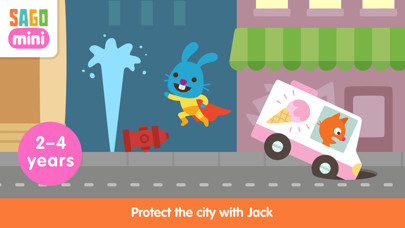 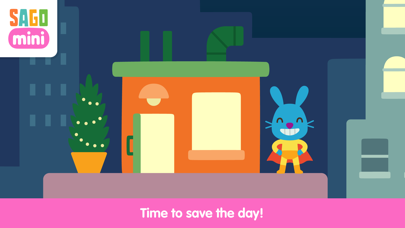 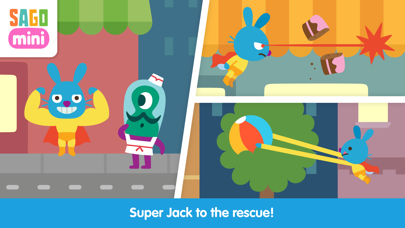 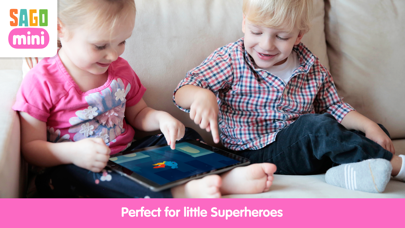 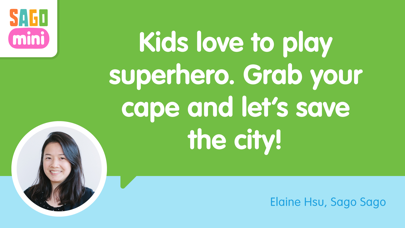 I generally love the Sago Mini games for my kids but this one is a waste of money. I just watched my kids fly through the entire game and complete every task in no time. Completing the task consists only of flying by a scene and watching the character do something- there is no interaction. It is too repetitive, and there is not enough content to justify spending $3.99.
By k-sav

This was the one that started it all for us. The game befuddled me at first as I tried to understand “how to win” the “game” ....as we have been trained to do. Yet, as I watched quietly beside my toddler son, I realized that this was no game. This was no timed task. This was no winner/loser, right/wrong, means to and end kind of world. This...(super dramatic long pause for maximum epiphanical - yes I made that up- effect)....this is a whole new world of open-ended fun that allows children (and parents and grandparents and every other human) to explore without rules or boundaries. Why would we want that? ((I hear you out there my fellow parent of the 80s gen)) Two words - EXPONENTIAL CREATIVITY. My children, now a little older, have such beautiful and fantastic imaginations and I credit this delightful trait to Sago Mini. We LOVE you guys and everything you stand for! Big hugbot hugs for making my children (and myself) see the BIGGER picture ❤️ our little family of four from Florida will be Sago Mini super fans for life! ⭐️ Jack Danger & Rex Maverick 🎸
By mpolstein

I would almost delete this game since it is pretty lame.
By Jim4sc

So my daughter loves this game but I think I’ll delete it. Just now tried to put it on an old iPad and learned that the app requires a front facing camera. Why? Of course I didn’t read the release when I originally downloaded and now I’m very concerned.
By OKC dub

i have three kids. ryliey who is 6 is older now. i won't give the game to her. just randy (4) because i think the flying games or like ( ocean swimmer) are for 4 year olds because 6 or 5 year olds (like my kids) would get bored.
By MDsplasher55co

My 6 years old kid doesn't even want to look at it! He doesn't do anything but fly and I wish they can reimburse my money.
By Soldriana

Awesome games. My son keeps asking for new saga mini games, but they are worthy and entertaining
By Leen05

My toddler son loves this game. He was so excited when I showed it to him. Even I had fun with it.
By MarinNana

What in the world??

Why won't this finish downloading? We can't delete it either.
By JDRNC

Same as another user, will not finish installing or delete from my phone! Tried known fixes and none work. Ap won't launch or delete. Annoying.
By Pbmoreno