meteoblue – weather worldwide on the go meteoblue shows high precision weather forecasts combined with a beautiful, simple and easy to use design. Weather forecasts can be requested for any place on Earth easily and comfortably. What makes this app unique: • Weather forecasts for any point on land or sea. • Location search with more than 6 million locations: search for location name, postal code or coordinates or let the app find your current position with the GPS module. • Widget: provides a quick overview of the current and future weather for a single location. • Background images matching current weather conditions at the selected location. • 7 days forecast: daily overview and detailed information for every single day with hourly or 3 hour values. Besides standard parameters like temperature, precipitation and wind information, unique features like predictability and rainSPOT give a better overview. • Meteogram 5 days: temperature curve with pictograms, cloud layers in different altitudes and wind forecast. • 14 days: trend forecast for minimum and maximum temperature as well as precipitation and precipitation probability. • Multimodel: forecasts of multiple different data models for a location. • Dynamic weather maps: instant overview of the weather situation over entire regions, countries, continents and the world. • Wind Animation: shows the movement of the air (windspeed and direction), coloured areas show the temperature. The wind animation is available worldwide. • Satellite map: observed cloud cover for North America, Central America, Europe, Africa and India, with lightning updates for selected areas. • Radar map: precipitation radar for Germany, Switzerland, Romania, USA and South America. Others will be added. • where2go: find the sunniest weather around your selected place. • Personalized settings: you can choose between various temperature, precipitation and wind speed units. • Offline mode: the app will save the weather data for each place until you are online again. • Fast: The app is faster than the meteoblue website. -------------------------------------------------------- The use of meteoblue for iOS is free of charge. Within the app, you can sign up for the "No ads - 1 Year" subscription, which disables all ads for a period of one year. If you choose to subscribe, you will pay the price set for your country, as shown inside the app. The subscription automatically renews if it is not cancelled within 24 hours before the end of the current subscription period. Your account will be charged for the next subscription period up to 24 hours prior to the current subscription expiring. It is not possible to cancel an existing in-app subscription. You can disable the automatic renewal function at any time by adjusting your account settings. Privacy Policy of meteoblue AG: https://content.meteoblue.com/en/legal/privacy General terms and conditions of meteoblue AG: https://content.meteoblue.com/en/legal/terms-conditions -------------------------------------------------------- Do you miss something? Do you have an innovative idea to improve our app? Do you really like our app and want to give positive feedback? Please don’t hesitate to contact us! We appreciate any suggestion and constructive criticism to improve the functionality of the app and our services. We wish you more good weather with meteoblue. 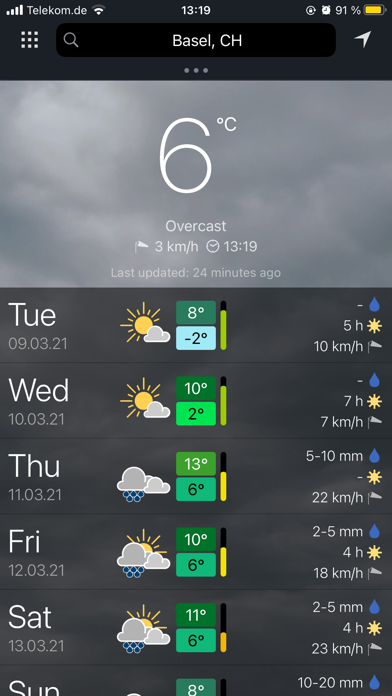 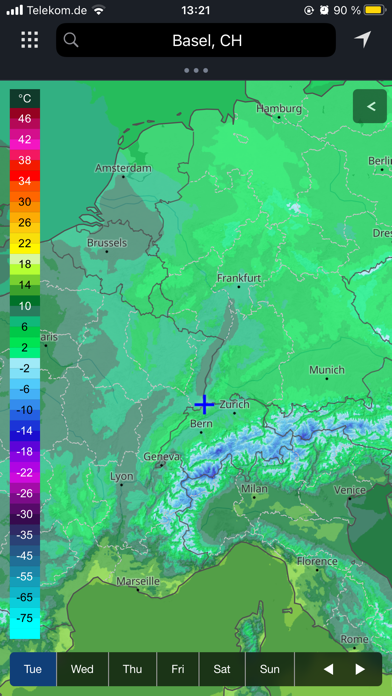 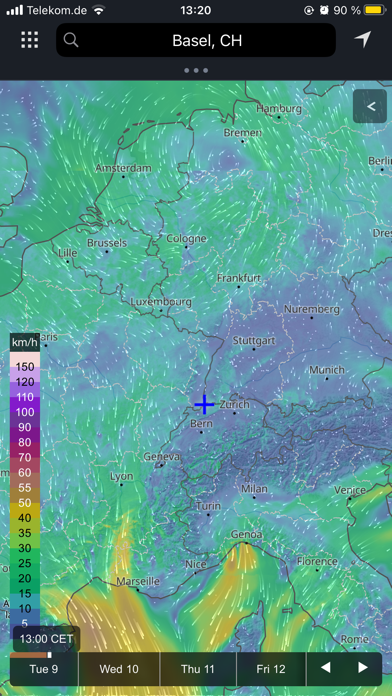 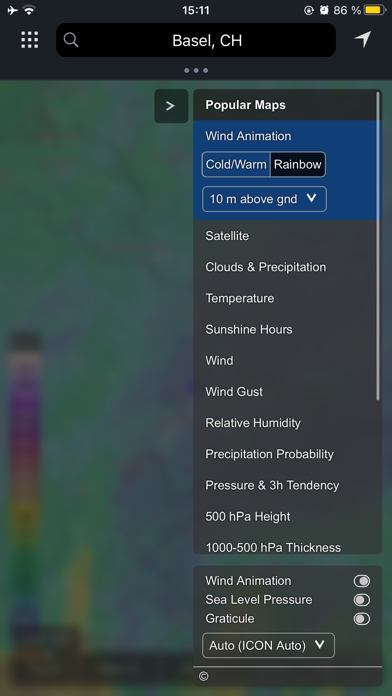 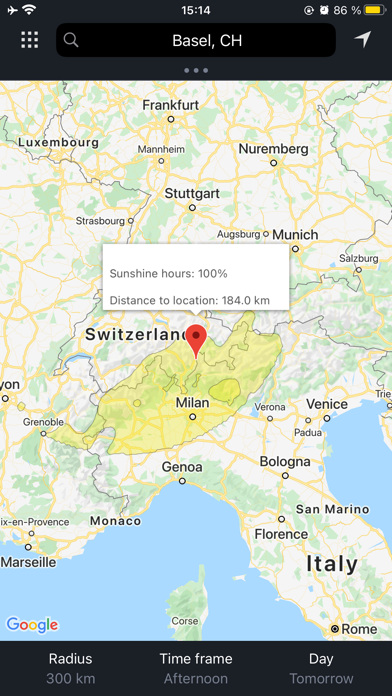 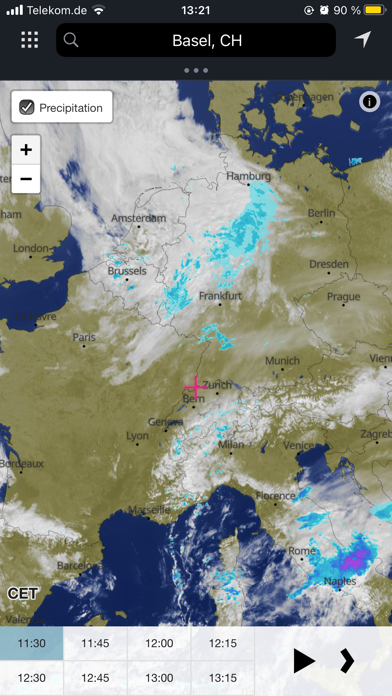 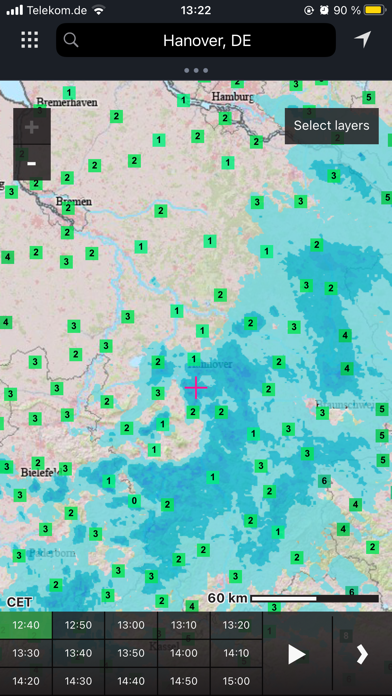 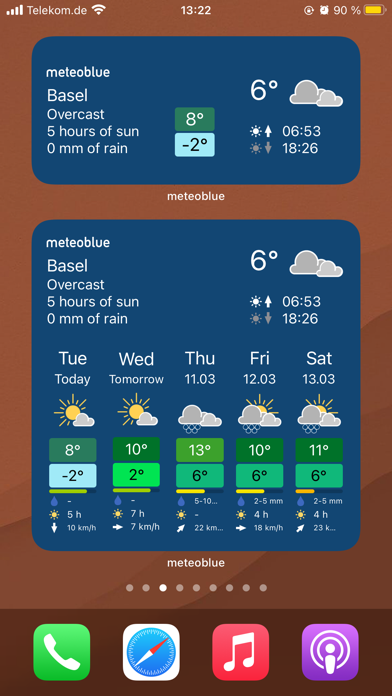 There used to only be a single ad banner at the bottom of the screen (at least on the Android version of the app), on this version there are pop up full screen ads.
By IsaacIIV

This is BY FAR the most accurate forecast for my location vs the five other popular apps I compared it to. So much info, so many data points, and a lot of features that are unique. If you have one weather that is NOT the. Built-in Apple option, this should be your choice.
By markhlong

It’s consistently accurate in Europe. Excellent UI with a refreshingly scientific focus. The subscription is worth it and inexpensive.
By tkc9e

Just updated to v1.5.1 for my iPad but most of the graphical data is now missing! Please fix.
By GKth

A lot of data but all in SI format

I like the app and the data it has, but everything is presented in C, km/h, and mm. Useless in the US because it doesn’t allow me to change the data format. You can do it on their web, but not in the app, at least not in the free version. Update: I received a response from the app developer regarding my previous review. I can change the units now and see data in preferred format.
By m527472

The most accurate weather forecast

Pop up ads drag it down

Hello developers. Have you ever personally clicked a pop up ad in an app? If not why put us through that? Show good ads elegantly without annoying your users.
By Dudleymon

This app had always been great, until it started glitching with ads as a paid subscriber. I emailed the app support team about it, and they apologized and told me to delete and re-download the app. I did and that solved the problem for a short while, but not permanently. Months later, I tried again and still it is showing ads despite continuously being a paid subscriber. I deleted and downloaded the app yet again, and this time it’s made no difference. Please fix this problem, Meteoblue.
By Jenanen

Why would the app select Celsius as the default unit (location in the USA, BTW) when in the app, but shows Fahrenheit when on the web page? And more to the point, why can’t I, as a savvy iPhone user, be able to EASILY find the setting or place to change it without having to resort to a google search that tells me to change it by tapping on the top of the temperature bar on the left side to change it, only to have the temp still on C instead of F Come on man, really?
By Charlie696969