Guitar - Play & Learn any Song in the ultimate app to play timeless guitar classics and popular hits for free. No prior experience necessary! The Guitar app is so easy to use, you’ll be playing like a pro within seconds. No need to learn the chords and the strum, no need to tune your guitar, simply launch the app and release the guitar player in you. Choose from rich song library across a wide variety of music genres like classical, popular hits, traditional and kids’ songs. With new free songs added daily you can learn new tunes, perfect your favorites, share them with the world and even challenge your friends to see who is the better guitarist. FEATURES: ** Tap the notes with your fingers to play music ** Choose from three guitars - Classic, Acoustic and Electric ** Play guitar alongside Top Singers and Musicians (with Video). ** Challenge your friend and see who is the better guitarist NEW SONGS added daily! Top hits include: ** Let it Go - Disney's Frozen ** Chandelier by Sia ** Happy by Pharrell ** Love The Way You Lie - Eminem Ft. Rihanna ** Stay with me - Sam Smith ** Demons - Imagine Dragons ** Say Something - A Great Big World & Christina Aguilera ** Bad Romance by Lady Gaga ** Rehab by Amy Winhouse ** Counting Stars by OneRepublic ** Sometimes by Britney Spears - Classical favorites include: ** A Little Night Music by W.A. Mozart ** Fur Elise by L.V. Beethoven Other Highlights: - Easy-to-follow tutorial - Visual 'Learn this song' mode. - Play all levels to become a 'Guitar Master'. - The more you play the more coins you can earn to unlock even more songs - 30 second preview of each song so that you can learn the melody - 3 levels of difficulty for playing each song (beginner, intermediate, advanced) - Easy to navigate drawer with access to Songbook, ‘My Songs’, Help Center, Settings and more UNLIMITED PREMIUM SUBSCRIPTION -You can subscribe for unlimited access to our VIP song catalog -The subscriptions are $2.99 weekly and $7.99 monthly -You’ll be able to play any of the songs including VIP songs as much as you like from any Apple device and enjoy an ad-free experience. -Payment will be charged to iTunes Account at confirmation of purchase -Subscription automatically renews unless auto-renew is turned off at least 24-hours before the end of the current period -Account will be charged for renewal within 24-hours prior to the end of the current period, and identify the cost of the renewal -Subscriptions may be managed by the user and auto-renewal may be turned off by going to the user's Account Settings after purchase -No cancellation of the current subscription is allowed during active subscription period -Private Policy - http://www.yokee.tv/privacy -Terms of Use - http://www.yokee.tv/terms *Price are equal to the value that "Apple's App Store Matrix" determines is the equivalent of the subscription price in $USD. Feedback We’re always trying to make our Guitar app better so if you have questions or suggestions, please share them with us! support@yokee.tv 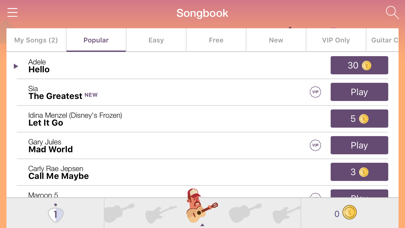 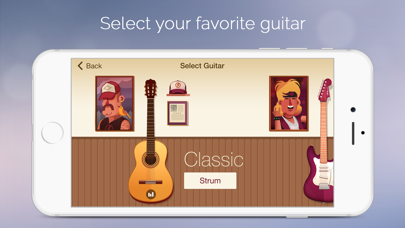 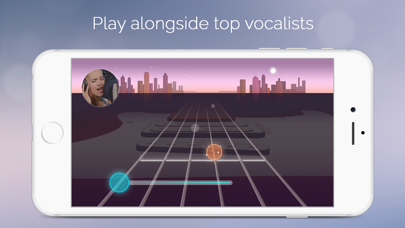 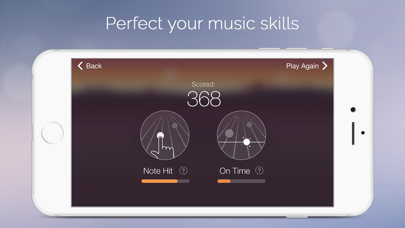 Two big problems for me....

The first huge problem is the ads. Oh. My. God. THE ADS. Click one thing, ad. Click another, ad. Play song, ad. After song, ad. It’s just too much! I get you want money but come on! Another problem is that there is little song choice. Update what’s trending! Some of the songs on there I’ve never heard of! There are amazing songs, but they are oldies. My two favorite singers are Shawn Mendes, Camila Cabello, Bruno Mars, and XXXTENTACION. You guys only had one guys on Shawn, which was a song from like 2016, and none for the others! Update the songs and just add more! I’m a bit disappointed with you guys on this one.
By Killer Robot123

Owned. Alright, anyway, why tf is there an ad every 5 minutes like geez.. Also you need WiFi to play this game. Dumbest thing I have ever heard. OR they just want you to watch a ad that wastes 20% of your time in life. Life would be better without adds. Remove some ads and show proof and I’ll change this review to a 5 star. But you probably won’t sense your a.. 🤑💸💰💵GOLD D$GGER🤑💸💰💵 Smh... 🤦🏻‍♀️
By Dinogirl1619

There are 2 ads that are facing the opposite direction and you can’t cancel them and you have to restart your device to play again. And than agin the ads come on and it freezes the game. Fix this please
By Natibam

The win screen is outside the phone space

This app seemed ok but it lagged and there were too many ads along with songs I didn’t really know or any songs I wanted to play if you are going to make a guitar app try adding some 1. AC-DC 2. Metalica 3. Green Day 4. Nickelback If you are able to put in Elvis then you can put some of the other monumental artist’s music in too.
By Wildman628

Everything was fine at first, working how it should be. But as I played a fourth time, it started glitching like crazy!!! I probably played 5 notes in that whole song!!! I thought, well maybe it’s just this song that glitches. But no!!! The song after that glitched, and the next one, and the next!!! Immediately after that I deleted the game.
By Baylee Gosset