Backed by investors Andy Roddick and James Blake. Built by A.I. experts from Tesla and Apple. SwingVision's patented A.I. provides real-time shot tracking and video analysis using just a single iPhone or iPad! iPhone/iPad Features: • Track shot type, spin type and ball speed • Analyze shot depth, spread, accuracy and rally length • Trim footage and create highlights of your best rallies • Get personalized coaching after each session • Set weekly goals and improve your game over time Apple Watch Features: • Track shot type, spin type and swing speed • Track scores and professional-level match stats • Use Siri to start tennis practices and matches • Save tennis workouts to Apple Activity and HealthKit INDIVIDUALS Use SwingVision® on Apple Watch to track your scores point-by-point, log your tennis workouts, and analyze your swing. Use SwingVision® on iPhone/iPad for deeper analysis of shot patterns, placement and accuracy. Review video footage shot-by-shot or point-by-point, share pro-quality match highlights on social media with scores and stats overlaid, and get coaching advice after every session. PARENTS, COACHES, & TEAMS Use SwingVision® on iPhone/iPad to track your students' scores point-by-point from the sidelines. Keep track of detailed stats like winners, unforced errors, first serve percentage, and break point conversion. Analyze your students' video highlights and match stats over time to objectively pinpoint areas for improvement. **** BACKED BY PROS **** "SwingVision is the first solution to bring sports intelligence to any court in the world, using just your smartphone. I’m thrilled to work with the team as they push the boundaries of tennis and technology."  - Andy Roddick "On tour, we had to pay thousands of dollars to achieve our potential on the court. Now, thanks to SwingVision, professional-grade technology is available in a handy app for tennis players of every level."  - James Blake **** SUBSCRIPTIONS **** Subscribe to SwingVision® Pro to unlock: • Unlimited shot tracking & video analysis per month • Data exporting for customized offline analysis • Recommendations on how to improve after each session • Exclusive coaching videos and drills from top tennis pros Any unused portion of a free trial period, if offered, will be forfeited when you purchase a subscription. Subscription payments will be made via your iTunes account and will auto-renew within 24 hours of expiration, one month from purchase date for monthly (or one year from purchase date for yearly). Turn off auto-renew at least 24 hours before expiration in your iTunes Store settings to let your subscription lapse. The current price of SwingVision® Pro is $119.99 USD per year ($9.99 USD per month). Prices may vary by country. Privacy Policy: https://swing.vision/privacy-policy/ Terms of Service: https://swing.vision/terms/ 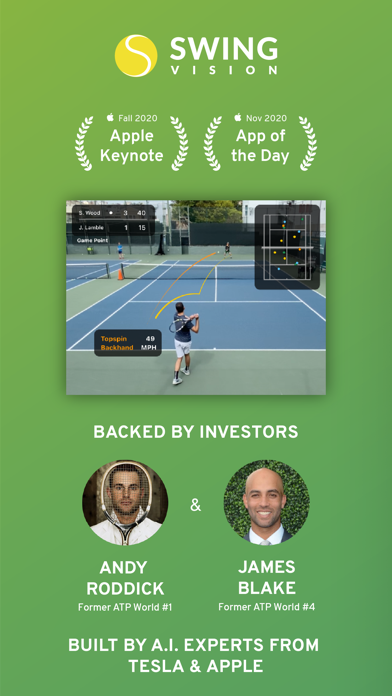 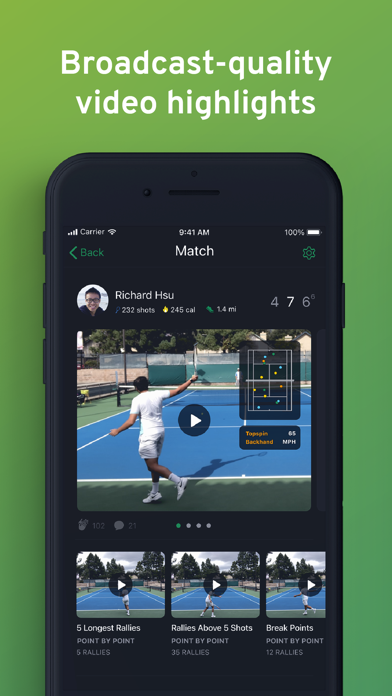 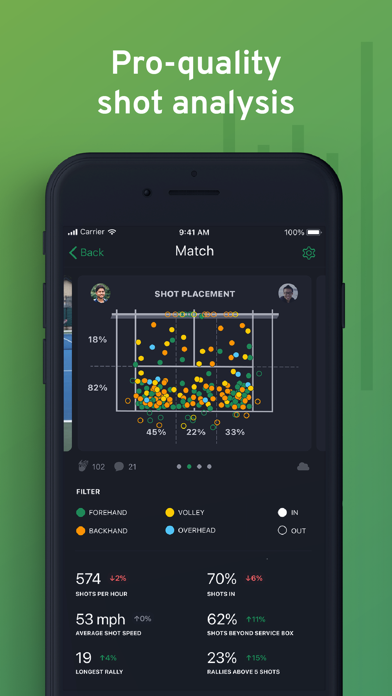 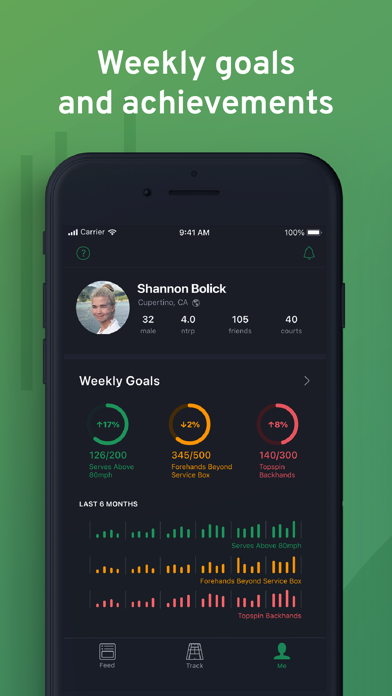 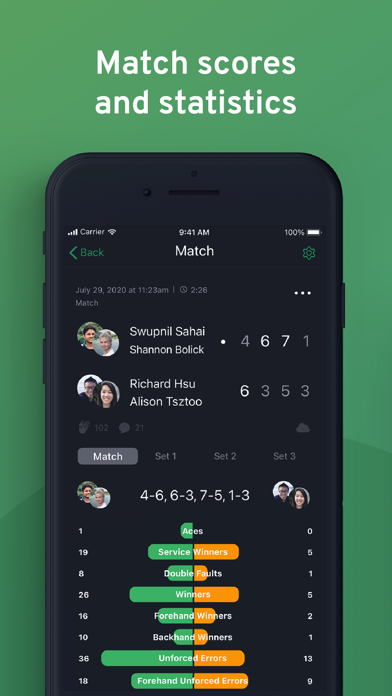 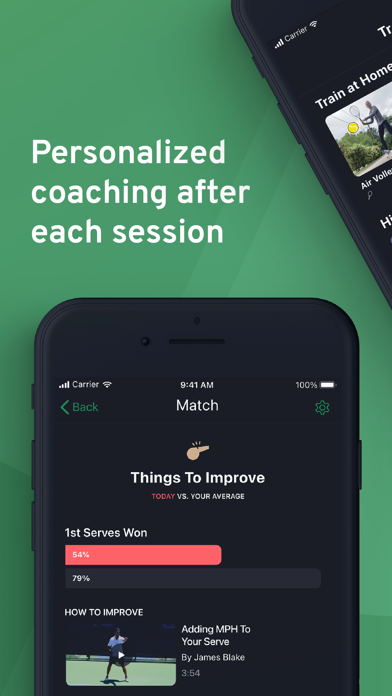 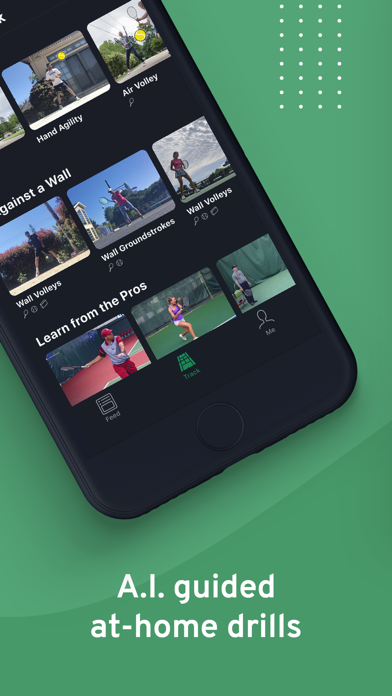 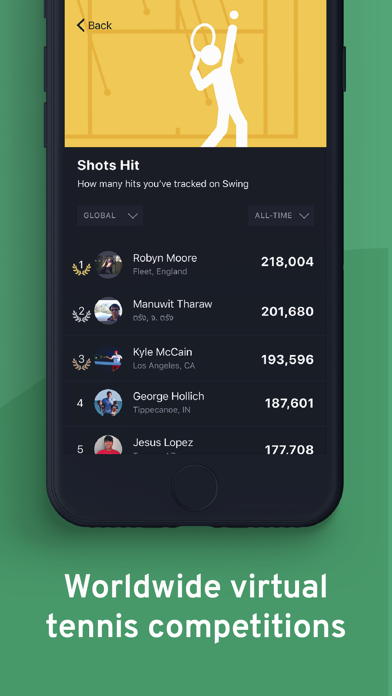 I love this app! The videos are fantastic, it gives you tons of information about your strokes, serves... it’s simply the best tennis app out there! Can’t say enough positive things about it! Just get it! You won’t regret it!!!
By Abscorpio

I have used the free version twice now. Both for singles rally. Things I really enjoy: it removes deadtime between rallies. Ability to filter rallies and shots so I can analyze aspects of my performance. Downsides: the app can take hours to process an hour hitting session. This might be more a function of my internet speed. In the second session the app recorded some of my forehands as backhands. All minor stuff in comparison to what you get.
By DBEssTee

This version has a big bug

All my matches this week have not been saved. I use the watch to keep score and after the matches, the phone and web have no scores or shots recorded
By JayMIKing

A must have for tennis players!

This app is SO cool to see how you’re swinging and progressing. I video track using my phone with a small tripod they recommend to hang on the gates. I also track on my Apple Watch. My only problem is I noticed that even after I’ve ended my practice on my Apple Watch and received my summary, if you keep swing vision app open, Apple Watch will still record as if you’re still exercising until you do an additional “end” and exit out. It should just stop after you get your summary or realize you’re not playing anymore and prompt an end. It would also be nice if you can view your rally highlights by speed.
By Margoandshilo

I wish you guys would make a Golf App like your Tennis one... Us golf enthusiasts need an app like this hurt for Golf😩
By Dustin_H84

The tennis tracking app that I’ve dreamed for

This app is amazing and exceeded my expectations in every aspect! Kudos to the awesome team behind it. It works like a charm with the recommended QM-1 camera mount. Now I tracks every hit I play, feeling like a pro. It’s both fun and beneficial to see yourself hitting the ball. Some potential future improvements: - it would be good if we can export video for a subset of selected rallies, for instance, rally #3, 6 and 7. That way we can more easily create custom highlights, or import the video to other apps for frame-to-frame slow motion analysis. Even better if we can have that integrated into the app :) Now I can do 0.1x playback, but I would like a horizontal slide bar so that I can navigate through frames more easily. I believe this app will become even better with the fast iterations I’ve seen and the great development team. Keep up the good work!
By 洁克李

Amazing when you nail the set up (updated)

(Updated review 7.5.2) Appreciate the responsiveness of the devs! They addressed my problem of nailing the set up by adding the active recording indicator + audio feedback (Apple Pay ding sound). Some details/observations/nitty comments about the app: 1) Depending on the order of starting a work out via watch app vs phone results in a different watch app experience. A work out via Watch app has three screens (video set up screen / workout stats / shot stats). If you start a work out via the phone, the shot stats screen is dropped and the shot count on the second screen is replaced with the fitness rings. I usually start a workout on the watch for a long warm up before starting a recording for baseline games, match play, or drills. This conserves phone battery for recording meaningful court time and conserves shot count for non-pro users. 2) The first time I used the app it took about 15 seconds to analyze a 45 minute video and had the wow factor of instant analysis. Today is took about 20 minutes to analyze a 45 minute video and was done after I packed up and drove home. 3) There is a bug with the video review where scrubbing between shots works on the first attempt, but touch input doesn’t get recognized on following attempts. Between the first and second attempts I hid the progress bar by clicking the center of the screen. 3) Shot contact doesn’t work for the far player at the net. Today I was on the far side from the camera and all my practice volleys and overheads were not displayed on the contact map. 4) Shot classification on overheads not reliable. Post process review of overheads in a warm up didn’t classify the shots as overhead. 5) Video clipping cuts out winners too early. A few time the AI will clip winners before the ball bounces twice and requires manual override. The majority of points aren’t affected, usually encounter 2-3 instances per session. -~-~-~-~-~-~-~-~-~-~-~-~- Original review Learned about this app as part of the iOS 14 announcement and I’m really impressed how it fully utilizes the hardware capabilities of the phone. I was delighted to see smart editing where the video automatically clips to the next feed or start of point, pro style over lays shot classification / estimated speed, and ball placement distributions. Frustrating when you think you’re recording but you’re not. The scenario that needs to be streamlined is notifying the user if you’re recording after the camera is placed at the top of the fence. There needs to be a notification on the phone hardware that indicates recording has started such as an audible notification or flashing the camera led with a start/stop pattern. Also the watch app needs to synchronize the status with a “recording” or “not recording state” on the camera set up screen. I often see he redline camera set up screen but don’t know if he recording is active. Online pricing doesn’t seem to match. 10 per month online, 15 per month within the app.
By rabidturtle

This app recognizes every shot, great stats visualization, what an awesome product. Only thing I am not how to use the Apple Watch....
By John0404

Best tennis app out there

I can’t begin to stress how powerful this platform is, and how much it can improve your game. I use it to track every single match I play. Specially loving shot placement and the most accurate shot tracking.
By cayajose

Amazing app and idea. The creator of the app is a genius and a great guy, he’s been great at responding to questions and helping. Love it and can’t wait to see future updates
By Bjackson231