Get free spam alerts and block those pesky fraud phone calls for good! Hiya shows you the true caller ID so you always know who’s on the other end of the line. Here’s why users rate Hiya: • It’s reliable - our phone spam protection engine automatically identifies and blocks spam calls • It’s fast - whether it’s a friend or a robocaller, Hiya give you real-time context on who’s calling • It’s secure - automatic alerts warn you about incoming spam phone calls. You can also report spammers to the Hiya community Download now for free and get instant protection from spam callers. Our advanced features let you take control of calls. PHONE SPAM PROTECTION Our advanced phone spam protection engine identifies and blocks robocalls, telemarketers, debt collectors and fraud calls like neighbor spoofed call scam. CALL BLOCKER Automatically block scam and fraud calls. Stop the “neighbor spoofing” calls from numbers that look similar to yours. CALLER ID Turn an unknown caller into a name. Whether it’s a call from a business, friend or potential spammer, our global database of caller names gives you real-time context on who’s calling. REVERSE SEARCH Lookup the phone number of a call from an unsaved contact to find out the true caller name and whether it is likely a robocaller. MANAGE CONTACTS Add names and addresses from Hiya to your phone book contacts to keep them accurate, complete, and current. We also run dedicated customer service. Designed for iOS. Free spam ID and business name ID worldwide. Premium caller ID and spam blocking works on AT&T, T-Mobile, Verizon, Sprint. Download now and never pick up a spam phone call again! AS SEEN IN The Wall Street Journal TIME Magazine - "Top 10 App" CBS Evening News Fierce Wireless VentureBeat - "Future of smartphone calling" USA Today Huffington Post - "Caller ID on steroids" The Verge Cult of Mac - "Essential" COMMUNITY Facebook: facebook.com/hiyainc Twitter: twitter.com/hiya Instagram: instagram/hiyainc The Hiya iOS app is brought to you by Hiya Inc. Utilizing the power of the Hiya database that has hundreds of millions of phone numbers, you’ll know the true caller behind more calls. Hiya is committed to delivering best in class caller ID, call blocking, spam protection. Terms of Service: https://www.hiya.com/terms-of-service Privacy Policy: https://hiya.com/hiya-data-policy 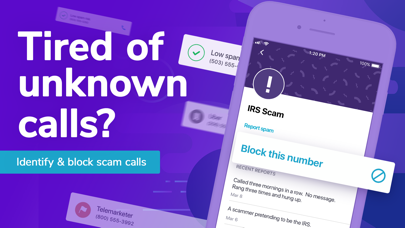 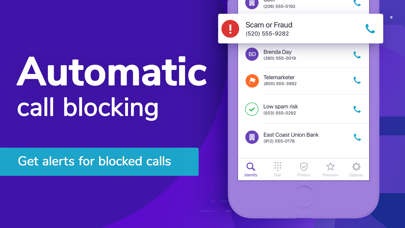 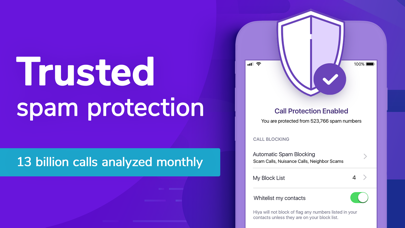 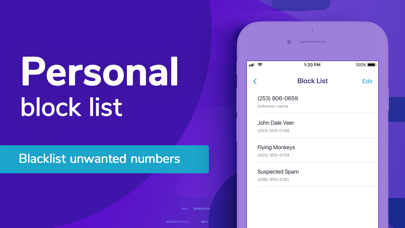 Not impressed, will not recommend
By Randall The Great

Nothing out in the app world which really works I’ve found so far except Hya. Hya has some small bugs but I’m sure they’ll be remedied once an update comes.
By GARYMASSEY

Idk if because I switched to an iPhone that the app is different. But I don’t like this version. Doesn’t really do much of anything. And there isn’t a recent call list anymore. So it’s hard to add spam and telemarketing numbers. Really useless since I got an iPhone. Or maybe just the new version of it.
By MystiQu3.1014

Then try to “block” them. Ridiculous. The update killed the app. No one is paying for these services.
By NoPantiesOn

It works and tells you if calls are spam calls, but you will still receive the calls unless you pay money. In order to block spam calls, you need a subscription.
By Bobby502

This app was recommended to me by Xfinity mobile. Does it even come close to CallProtect provided by ATT. I paid for a one year premium subscription, but I will not renew.
By 489Trqjn29

Hiya is a worthless ap

I pay for the service and still get many solicitations. Not worth the price of premium.
By Doless-n-Seemore

Updated My Rating to 4

I figured out my set up procedure. So now I can use the basic version and update my rating as I begin using it. If I like it enough to buy the premium, I’ll do so.
By Nokka61

Blocks the calls so I never hear them! Yeah! Love that the app is free with my service carrier but it still asks me to pay for a premium subscription every time I’m on the app, which is daily. That’s a pain! Otherwise, love this app! Has saved me from 100’s of robocalls in the past year!!!
By cktriano1