GyPSy Guide’s narrated driving tour for the Big Island, Hawaii is an excellent way to enjoy all the benefits of a guided tour while you explore at your own pace. There are 460+ audio points that play automatically along a tour route, featuring the best things to see and do, stories, tips and driving directions. Professional tour guides share advice on how to prioritize your time at recommended “not to be missed” viewpoints, suggested side-trips and places of interest. Tours work offline, using free GPS signal and location services, so no data roaming, network, or wifi is required while touring. Visit www.gypsyguide.com for route maps, sample audio, tips and advice and what to know before you go. It’s Just Like Having a Tour Guide in Your Car™ WHAT TO EXPECT: Includes 4 driving road trips to the Big Island’s best attractions, viewpoints and stories. Most visitors stay and start the tours in Kohala, Kailua Kona or Hilo. Includes all 4 driving routes; Kohala North Route (allow 1/2 day) If you only have a half day, travel to the North end of the island. View the beautiful Kohala beaches and resort areas of Waikoloa and Mauni Lani. Continue on and enjoy the laidback charm of Hawi. On the return drive, you’ll discover Hawaii’s wild wild west and the Paniolo (Hawaiian cowboys) around the rural and ranching areas of Waimea before connecting back to the coast. South Kona & Coffee Coast Route (allow 1/2 day) Pack your swimsuit and snorkeling gear for another half day itinerary, this time driving South of Kona. Coffee has been grown around the world, but some of the most highly prized beans come from the upland slopes around Kona. After this jolt, you may want to connect with some of Hawaii’s significant cultural sites, the sanctuary at the Place of Refuge and at Kealakekua Bay. Volcanoes National Park Route (allow full day) Allow a full day and head to the most active volcano on the planet. On our travels to Volcanoes National Park it’s a perfect time to review the volcanic forces at work behind the creation of the Hawaiian Islands, or you may prefer to embrace the Hawaiian legends version. Big Island Circle Route (allow full day) For the true adventurers, a full Island Circle itinerary adds touring to the green or East side of the Island. From the panoramic views along the Hamakua Coast and the 442ft Akaka Falls State Park to peeks into the lush Waipio Valley. Plan for time in and around Hilo with it’s Liliuokalani Gardens, nearby waterfalls and lava tube caves. (Don’t try to include Volcanoes National Park to this day, it just isn’t viable timewise). WHAT YOU’LL SEE: Highlights along the tour route include; • Volcanoes National Park • Coffee Coast • Waipio Valley • Kealakekua Bay • Place of Refuge • Kamehameha Statues • Hamakua Coast • Akaka Falls • Waimea • Lava Tube Caves • Hilo • Kona • Liliuokalani Gardens • Rainbow Falls BATTERY USAGE: ++ Continued use of GPS/Location Services in the background increases battery usage. We strongly recommend taking a cigarette style (DC outlet) car charger. Avoid using a direct connection to the USB port of a rental vehicle. IPADS: ** iPad models must include a GPS chip. Please note that Apple only install these on the iPad Wifi + Cellular models. Wifi only iPad models have limited location service capabilities and are unable to play commentary automatically. DOWNLOADING: The apps are larger in size in order to work offline. You must be on wifi to download as the store may block the download over cellular networks. ABOUT US: GyPSy Guide™ produce award winning narrated audio tours along scenic drives and road trips around the world. Enjoyed by travelers who prefer to set their own pace and itinerary on vacation, but enjoy a fun, informative and educational guided experience while driving themselves. None of our apps include paid advertising or placements for benefit. 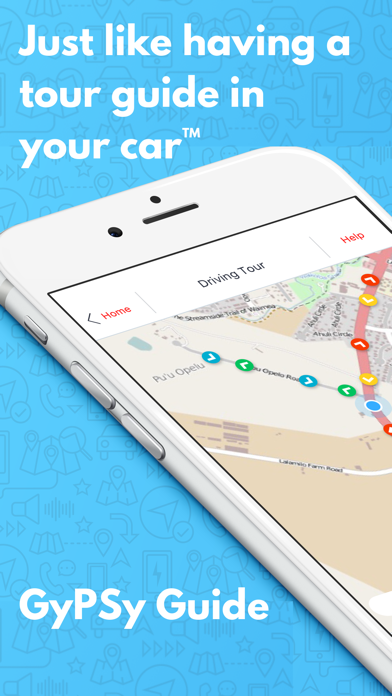 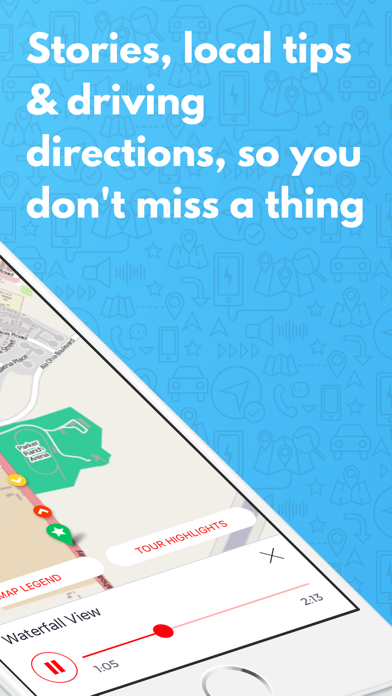 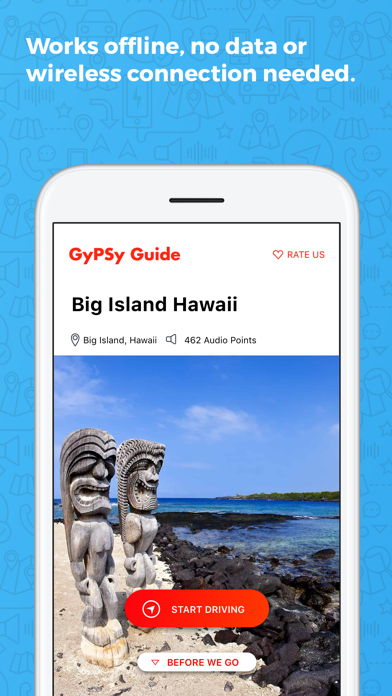 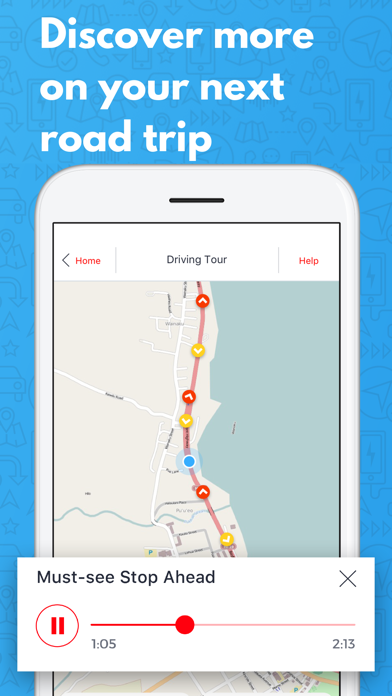 This app is amazing and would consider it a necessity for any trip to the Big Island. Was able to take a self-guided tour around the island using the app and learned about Hawaiian history and saved money by going at it on my own verses using a bus tour! I definitely plan to use Gypsy Guide again!
By Alexandrea Graham

So close to greatness, but misses the mark.

The voice is pleasant. Reminds me of Tom Bosley. Cadence is great. Information is good. There are MANY UX/UI problems. 1. You can’t scroll around the map for an upcoming point or a point you passed. The map refocuses on where you currently are. 2. When you pass a point on the map going the opposite direction of the tour, autoplay of that clip doesn’t work. Ok I know it will be problematic if the clip says “the little blue church is coming up on the left.” And I’m traveling the opposite direction. I’m smart enough to know “oh, I’m traveling the opposite direction, so the little blue church is on the right and maybe I just passed it. Do I want to turn around?” Thats MUCH more useful than nothing. 3. If you want to play a clip ad hoc without being close to the waypoint, the UX is super glitchy. You tap on a green dot and nothing happens, or maybe the audio player pops up but nothing plays. Super Aggravating. Workarounds: You can run this app in a simulator and fake your location information- it’s the same way people used to cheat at Ingress before ninantic figured it out and added protections. The thing is, why would GypsyGuides make it so hard just to play an audio clip? Just let me scroll the map and play the clip I want. :(
By Flyingtaquito

If you are visiting the big island this is the best app I ever seen I did compare to others nothing came close on Feb 14 my wife and I celebrated our 38 Anniversary we are very active using this app was such a blessing not only did we travel the entire island but the information and education was far the must informative I ever heard about the history of the Hawaii and the island, it also gave reference point to all turns even described what was around the turns, I Connor say enough about good this app is. We drove over 800 miles in 4 days. The only thing it did not have was the southernmost point Naalehu, Big Island, Hawaii but we founded ourself my advice get this app it’s great.
By chicomink

Don’t Leave Home Without It!!!!

We first heard about GyPSy Guide when we went from Banff to Jasoer. We found it incredibly informative and entertaining. So on our first trip to Hawaii, I got the island package and first used it on Kauai. I really can’t say enough superlative words about the app. It was obvious on the road to Jasper how it worked because there was only one road, but it worked just as beautifully with choices. “Fred” helped us choose where to go, gave us lots of information about the history, culture, geology, and flora/fauna and weather. It tells you what is a must see and what to do or pass up depending on time. He speaks with humor and has a good voice. I like how he reminds of previous stories and continues them at various points. It was great for our 2 days on Oahu and then the 7 days on the Big Island. “Fred” even did a great job of explaining not only what to see in Volcano National Park and how to use our limited time wisely, but also about the important geology, history and biology related to the park. I seriously will purchase every single one available for every road trip or vacation we do from now on!!!!
By PoulsboMom2Two

We had a time box, so we picked only the stops that most interested us. We loved being able to discover great new things, and skip what we wanted. We even took our own stops and detours along the route and the guide caught up as soon as we returned to the route. Super high quality.
By Six Sigma 6σ

If you are going to the Big Island, don’t go without this app! It is such a great guide to the sites, history, and culture of the Island. There are many places you would not know they are even there without the app. Worth every penny and more.
By NC Tourist

We used this app on Maui and the Big Island! Very informative and useful tips traveling throughout. We named the guide “Dave”...he does a great job! (Would love to know his real name!)
By MFoss23

We recently went to the Big Island and stumbled upon this app. Having used it on the road to Hana in Maui, we knew we liked the idea of it. This was most helpful for a list of reasons but the top two are: 1. Works without cell signal. I lost service a lot and this kept working as it’s based on your GPS. It kept us talking in the car about the fun facts and learning as we were driving significant distances. 2. It told us places to turn off and things to see that we wouldn’t have known about without a lot of research. Well worth the money, recommend to all driving on the big island!
By reviewerb-

Gypsy Island was extremely helpful!! I can’t imagine driving around without it. Everything was spot on, made our trip extra special.
By Travel fanatic 2

This Gypsy Tour app is the BEST THING EVER!! We had the best time and the guides were dead on point for sightseeing and driving around the big island of Hawaii! Like having your own personal tour guide, with tips and scenic routes all perfectly laid out. Do yourself a favor and get the full island tour (but break it into 2 days like he recommends). So much fun! Felt like an old friend by the time we were done!!
By Sally's Account

Going to the Sun Road GyPSy