"Simply remarkable, […] you’re nuts if you don’t try Apollo." - John Gruber, Daring Fireball "The best Reddit app for iOS" - The Sweet Setup "Apollo is the best Reddit client I have ever used. Period." - iMore "Apollo makes the wild world of Reddit more accessible than ever before, and it may just be the best designed social feed app I've ever used." - MacStories "Apollo is the only Reddit app you need." - TechCrunch "Beautiful, modern, and fast." - MacRumors Apollo is a beautiful Reddit app built for fast navigation with an incredibly powerful set of features. Thanks to features like the Jump Bar, fully customizable gestures, and a super-charged Media Viewer, browsing Reddit has never been this amazing. It's created specifically with iOS design guidelines in mind, so it fits right at home on your device, and with input from thousands of Redditors helping sculpt and perfect it over several years before launching: - Jump Bar, for super-fast hopping between subreddits - Super-charged Media Viewer for an amazing experience viewing images, GIFs, videos, albums , and more from a variety of sources. - Tabbed interface for easy navigating - Incredibly powerful Markdown composer for writing comments and posts - Full inline Imgur uploading, both images and albums - Large or compact posts depending on your preference - Dark mode (can be automatic) - Fully customizable gestures - Safari View Controller for browsing articles and links - Inline previews of media in comments - 3D Touch support - Beautifully organized Inbox - Filtering and blocking - Face ID / Touch ID / Passcode lock - Moderator features - Tons of settings to tweak - GIF scrubbing to go backward and forward in time - Multiple accounts - Powerful search - Full Markdown rendering - Unobtrusive Volume Indicator As well as much, much more and it's constantly evolving. If you have anything you'd specifically like to see, come to the ApolloApp subreddit and we'd love to hear it! This app offers subscriptions for "Apollo Ultra". They're available (in United States pricing) for $0.99 monthly or $9.99 yearly. Subscriptions will automatically renew unless auto-renew is turned off at least 24 hours before the end of the current period (and charged to your iTunes account). You can turn off auto-renew/manage subscriptions in your iTunes Account Settings after purchase. Terms of Use can be found at https://apolloapp.io/terms and Privacy Policy can be found at https://apolloapp.io/privacy Apollo is an unofficial app, and side effects may include an incredible browsing experience. 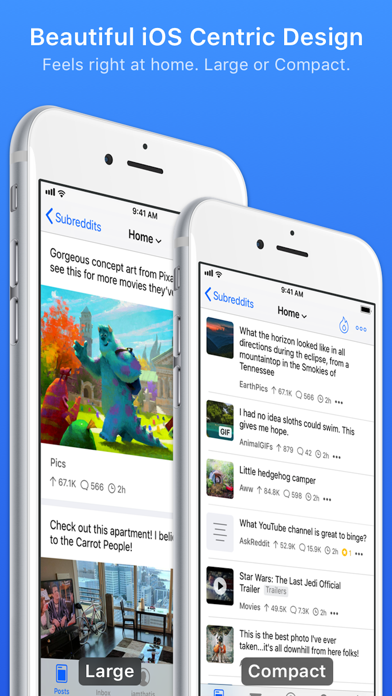 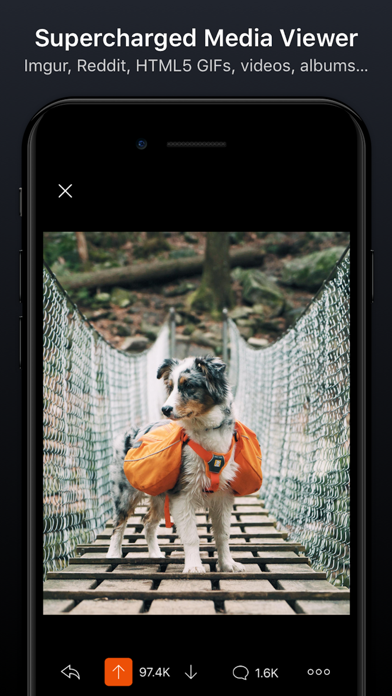 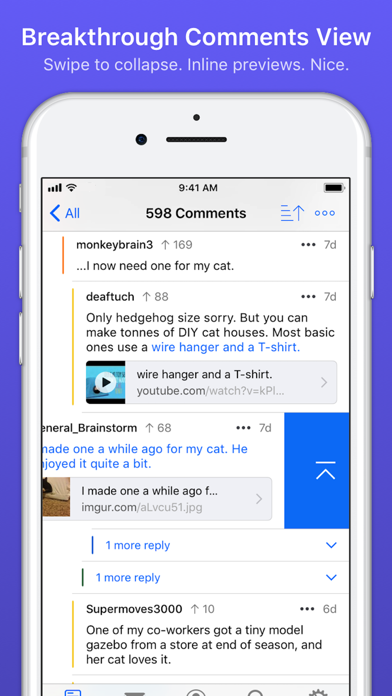 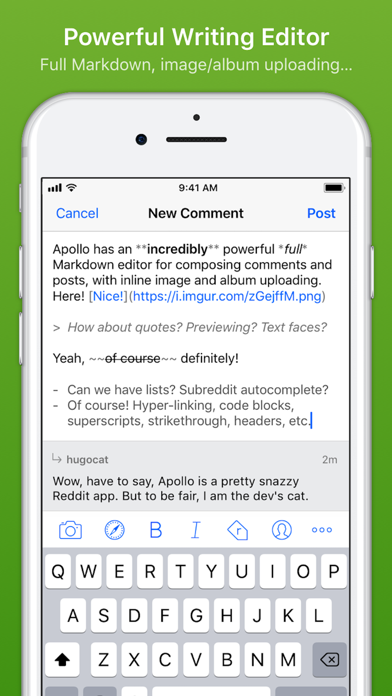 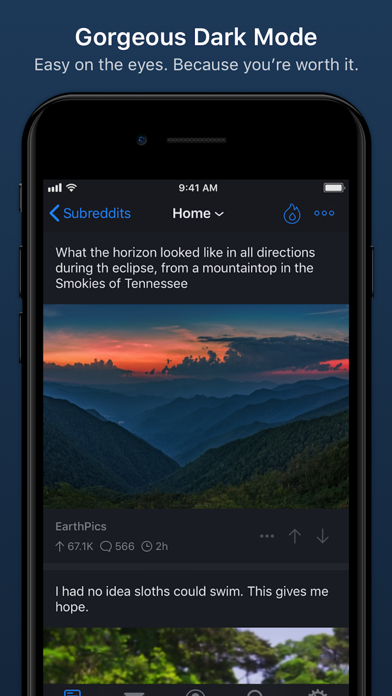 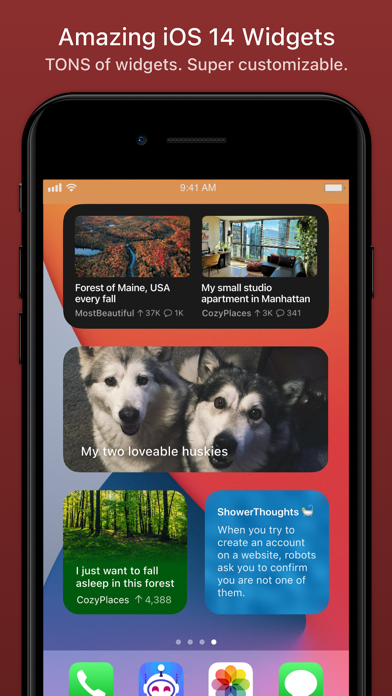 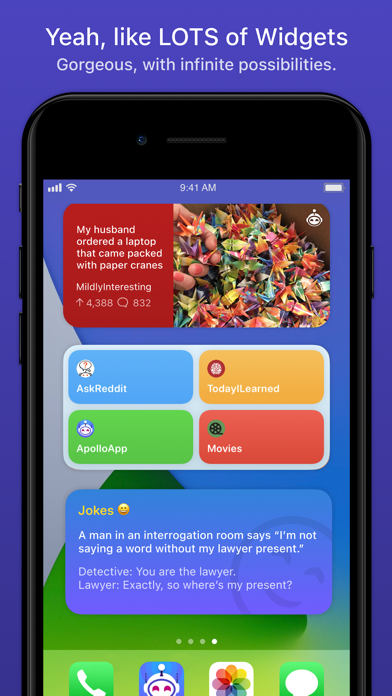 Coming from both the official app and the website, Apollo’s clean design has made it so much easier and more enjoyable to consume the looming Reddit content I dare myself to see. But in all seriousness, this app is just gorgeous and makes scrolling through Reddit such a nice experience
By Awesomezach101

If you want to charge for a better experience that’s fine, but don’t be lacking features from the free Reddit app until then. I’m not going to stick around and decide to pay money for something that so far has only made my experience worse, I’m going to leave immediately
By PaToSaLe

Best Reddit client, has iOS 14 kinks to work out

Used Apollo for years over the crap stock app. The widgets are an awesome addition and Apollo’s widgets are some of the best on my home screen. BUT, since the recent .1 update the widgets no longer refresh and leave a permanent black screen. The widget will flash the new photo to be displayed, but then the mage fades into a blank black screen persists t on widget. Only in-installing and re-installing the all and remaking widgets temporarily fixes this. 5 stars once the widgets are ironed out. I love them when it works!!
By Drizztar

Quit showing me pop ups begging for money
By kmasta

Widgets were so good, now they are broken. They either show nothing at all, or have been showing the same post for the past 3 days. Please fix this!!!
By 777$#$777

The audio doesn’t work after muting and unmuting a video, and the developer doesn’t respond and hasn’t fixed it in weeks.
By a2738

Very pleased with how Apollo works; easy to use and intuitive.
By Peeved4659

Love the app. One issue Ive run into

I downloaded Apollo after seeing the long list of great reviews and it hasn't let me down. The only thing that has stopped me from using it exclusively as my reddit app of choice is that I have 2 accounts I use regularly. I have paid for Apollo pro and have both accounts logged on and they switch seamlessly but when I go to my subreddits, it takes quite a while to load the correct account’s subreddits and i am not able to set specific favorites for each account which is a feature of the official Reddit App. Besides this, love the app and if this was updated/fixes I would 100% give it 5 stars.
By FP2155

Can't submit post without paying. Smfh. Y not charge me to comment while you're at it.
By roli719

Christian is a phenomenal developer

He has created a great app with a great response to what the users want. Shows he truly cares. Thank you Christian. 🙂
By gabblewae