The 15 biggest Oxford dictionaries at your fingertips Powered by Oxford Languages, Oxford Dictionary is widely regarded as one of the highest authorities in the study and reference of languages today. Easily switch and navigate between the 15 biggest Oxford dictionaries along with advanced search and learning tools. · Oxford Dictionary of English · New Oxford American Dictionary · Oxford Hachette French Dictionary · Oxford German Dictionary · Oxford Spanish Dictionary · Oxford Russian Dictionary · Oxford Chinese Dictionary · Oxford Paravia Italian Dictionary · Oxford Hindi Dictionary · Oxford English Urdu Dictionary · Oxford Essential Portuguese Dictionary · Oxford Japanese Mini Dictionary · Oxford Greek Mini Dictionary · Oxford Softpress English Bulgarian Minidictionary · Concise Oxford-River Books English-Thai Dictionary Oxford Dictionary is a valuable resource for anyone using a foreign language in an academic or professional context: • Professionals actively using English • Students preparing for ACT, SAT, IELTS or TOEFL exams • Academics As well as anyone else who needs a comprehensive and authoritative dictionary at work or at home. RICH CONTENT FROM THE AUTHORITY ON THE ENGLISH LANGUAGE • The latest 2022 word database from Oxford Languages (part of Oxford University Press) • Over 1 million words, phrases, and definitions • High-quality audio pronunciations • Special Topics reference content – easily look up topic-specific content • Word-of-the-day – learn a new word every day USER-FRIENDLY APP FEATURES AND INTERFACE • Favourites list - create custom folders with lists of words • Recent list – review previously searched words • Word sharing - easily share a new word or definition you have just learned • Home page – an intuitive start to your journey into the English language • Auto-correction option - correct the spelling of any word, as you type ADVANCED SEARCH OPTIONS • Search autocomplete - displays predictions as you type • Keyword lookup - search within compound words and phrases • Camera search - look up words in the camera viewfinder • Voice and fuzzy search - find an entry when you don’t know how a word is spelled GET THE MOST WITH PREMIUM Our premium app features unlock the full potential of the world’s best dictionary by providing you with the following: • Unlimited dictionary use – unlimited access to the latest database with more than 1 million words, phrases and meanings • Audio pronunciation – never mispronounce another word again! • Offline and Fast mode - access the entire word database anywhere, anytime - no data or internet connection is required • Regular content updates – receive updates to the word database, as soon as it is available from Oxford Languages • No advertising – enjoy an ad-free learning experience with no interruptions or distractions PRICING & SUBSCRIPTIONS Auto Renewing Subscription Terms: • Subscriptions are billed weekly, monthly or annually at the rate selected on the subscription plan. • The price of each subscription corresponds to the same price segment, which is set in the "Apple's App Store Matrix" for other currencies • Your subscription will automatically renew unless auto-renew is turned off at least 24 hours before the end of the subscription period • You can cancel a subscription anytime by turning off auto-renewal through your App Store account settings. This must be done 24 hours before the end of a subscription period to avoid being charged. The cancellation will take effect the day after the last day of the current subscription period, and you will be downgraded to the free service Privacy policy: https://www.mobisystems.com/privacy-policy Terms of Use: https://www.mobisystems.com/terms-of-use 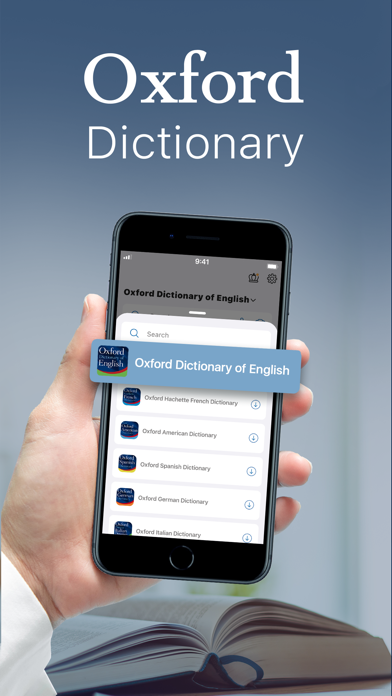 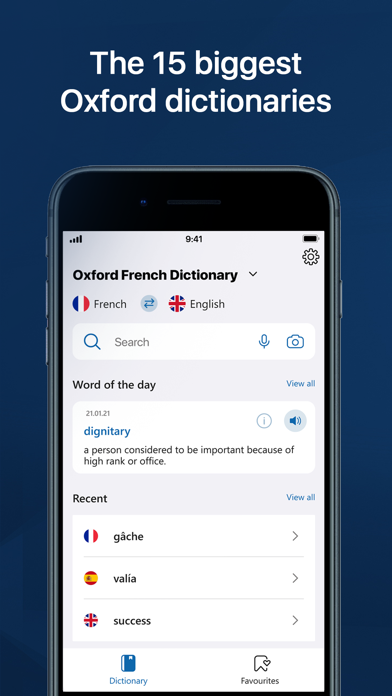 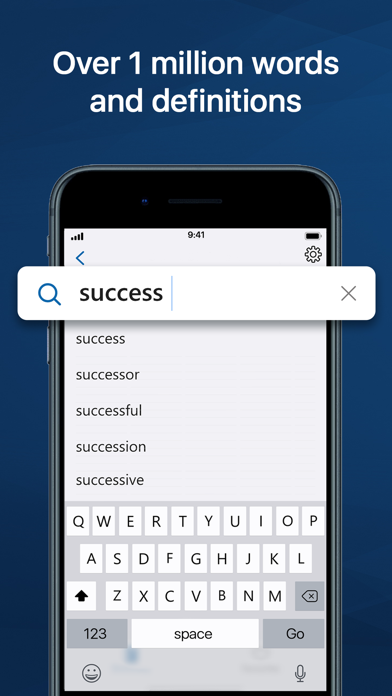 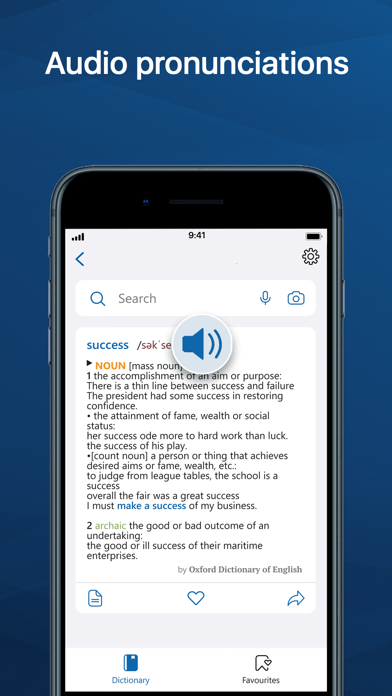 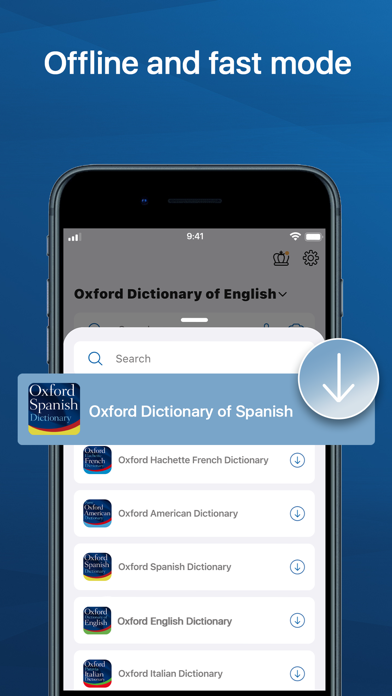 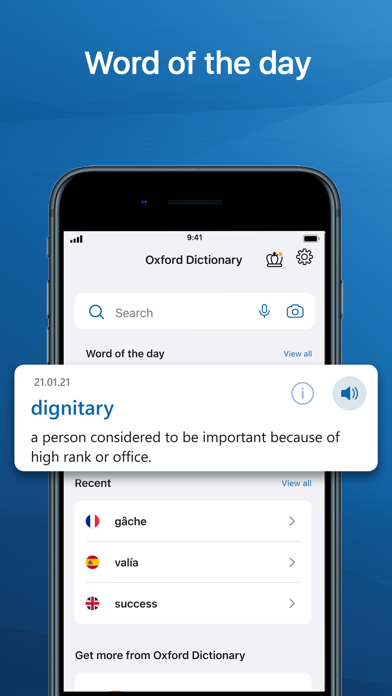 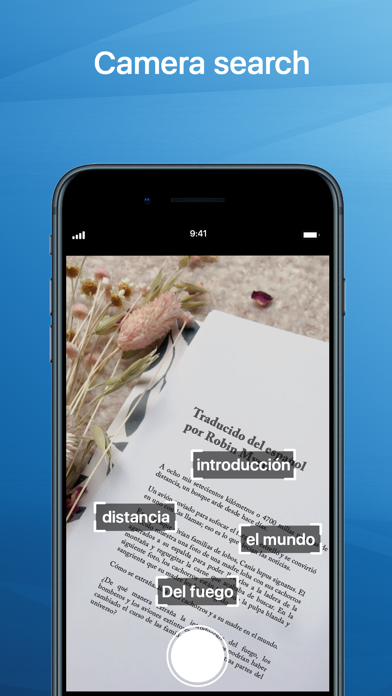 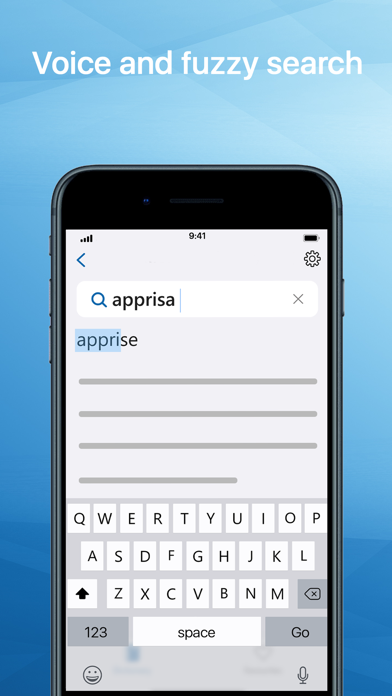 When the Oxford dictionary can’t find austerity makes it useless.
By Cliff_n_R

BRING BACK THE SWIPE FEATURE

Bring back the swipe feature that allows you to swipe to the next word and back, as needed. Why wouldn’t the developer think to add this feature for those users who enjoy reading each word one after the other? I should be able to seamlessly swipe to each new entry in alphabetical order like most of the other dictionary apps.
By disgruntled dictionary reader

Not working with iOS 16

The French English dictionary was excellent until iOS 16 was installed. Now it will no longer pronounce words, and it will not go to the home page. If they fix these glitches, it will be excellent again.
By Okie@Apple

Word of the Day Spelled Wrong

Downloaded app and the Word of the Day was diginitary. The definition of this non-existent word matched dignitary. I took a screenshot and deleted the app. The developers reached out to me after I wrote this review so I’m adding a star for the courtesy.
By Zedgar

Finally an app worthy of the name

After complaining about the ads, terrible interface, crappy features, the tracking; this app has finally become what it should have been from the beginning - User focused. Shockingly still put out by Mobisystems. Shocking!
By Cham_Eli

Too many words not listed or defoned!
By Glenn of Olomana Gardens

Great app but omg dark mode please my eyes are burning!
By v1nsai

As when some unnecessary upgrade to make mental done it screws up a good app.
By LordAfrica

Shameful: misspells “dignitary” in its own tutorial

This is a review of this terrible app and developer, not the dictionary itself. This is a poor-quality, cheaply made app by a developer that just licenses a bunch of different dictionaries and then crank’s out poor-quality apps with that name of that dictionary brand. The functionality and poor quality is basically the same across all “Mobisystems” dictionary apps. FOR EXAMPLE: The tutorial for this app spells “dignitary” as “diginitary,” which is just inexcusable for a dictionary app. (I have a screenshot of this sloppiness, though there’s no way to attach it to an AppStore review.) Do you dare trust this crummy software? Also, FYI to those writing reviews that confuse the matter: The Oxford Dictionary is not remotely the same as the OED. They’re both owned by the same publisher, perhaps, but it’s like saying that a Toyota Corolla and a Lexus are both owned by the same company. If you bought the cheap one (i.e., the Oxford Dictionary), you’re not getting much benefit from the fact that the same company also has a vastly superior product. Unfortunately, there is no consumer app of the OED, and it’s mostly only available via libraries and academic institutions who can afford the extremely high subscription fee. So the fact that the publisher just licenses its consumer app out to a shoddy, low-rent developer tells you exactly how much they care about what you’re getting here. You aren’t getting any OED shine with this cheap app.
By Crankyfu