English to German & German to English Translator & Dictionary with 200K offline bilingual sentences & expressions. Includes more than 200K words, sentences & expressions Auto language detection Easy to use, fast, works offline. Pronunciation with human voice. Supports finding sentences, phrases, related words. Word correction for mistyped words. Tap word to see its meaning in popup window. Review words and expressions with History & Favorites. Upgrade to Premium to remove ads and enjoy unlimited translations. You can pay once for Premium or choose from 2 SUBSCRIPTIONS options - a yearly subscription. (come with 3-day free trial) - a monthly subscription. – Payment will be charged to iTunes Account at confirmation of purchase. – Subscription automatically renews unless auto-renew is turned off at least 24-hours before the end of the current period. – Account will be charged for renewal within 24-hours prior to the end of the current period, and identify the cost of the renewal. – Subscriptions may be managed by the user and auto-renewal may be turned off by going to the user’s Account Settings after purchase. – Any unused portion of a free trial period, if offered, will be forfeited when the user purchases a subscription to that publication, where applicable. Privacy Policy: https://evolly.app/privacy-policy/ Terms: https://evolly.app/terms-of-service/ 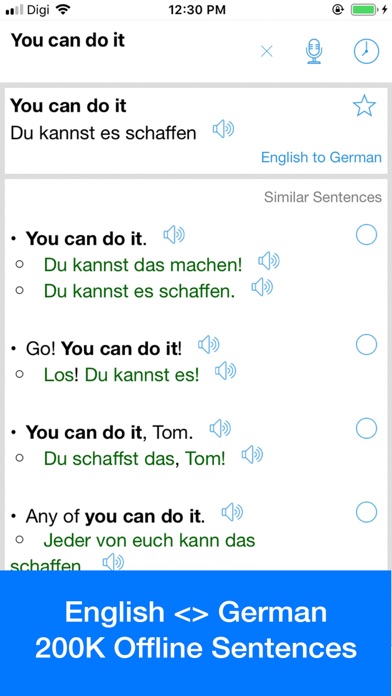 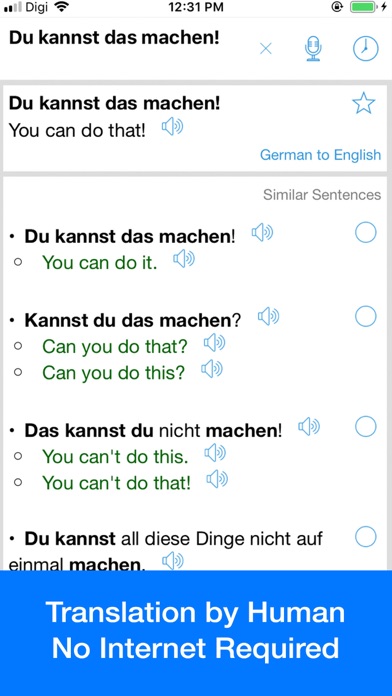 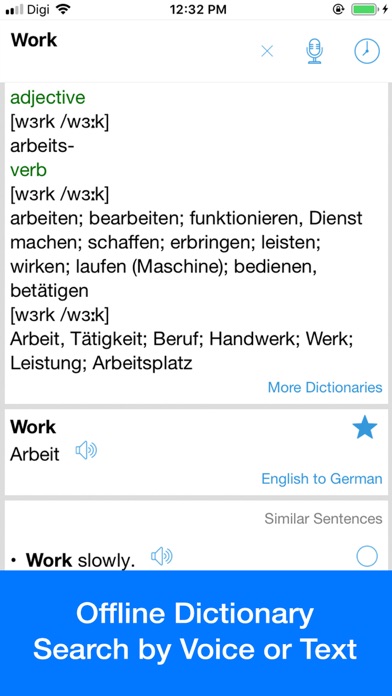 I have purchased the Premium version. I use this religiously for translation, variances in English to German sentence construction due to differences in how we might express a thought in English vs how a German may relay the same thought in their native language, and the application of the word or thought through other additional sentences that are provided. As there is more than one way to express a thought in English, the same applies to German. At times I will input in German how I think a German would say it, and the translator confirms my correct thought in English; yet when I input the same thought in English, the German translation comes back different than how I expressed it in German. It becomes confusing as to whether the German translation is the preferred expression, or my interpretation would be acceptable and understood. This translator is a fantastic tool which I don’t know what I would do without in my effort to learn German.
By Ross406

There was a time where there were little or no ads in this app... those were the good times. Now, there's an ad after almost every single time I click on the pronunciation button, which completely brakes me train of thought and renders this app useless. also, I know enough German to know that the translations do not translate anywhere near what they mean from one language to the other.
By V for Grandma

I’ve learned so much
By marg mel

This is one of the best apps i have found till now. Appreciated your hard work. Btw, here wa can provide rating, review, so as to the keyword searching install.Want to get more organic users, then find us in upmobi.xyz
By Jessikah Braim

I do appreciate this app and I do realize it’s free. However, the ads make it almost unusable. An ad will pop up EVERY SINGLE time you look up a word! The upgrade price is also not reasonable unfortunately
By Universe Traveller

After the latest update, every time that you open the app a new ad pops up in addition to the banner ad! I know this is a free app but the ads are really annoying me and if this keeps going like this I will definitely delete the app! There are so many translators on the AppStore.
By MMDSaeedi

When I first got this App, I thought it was great, until the ads started blocking your conversations. They try to annoy you into buying the upgrade. Sticking with Google translate.
By juno717