CuriosityStream is the world’s leading documentary and non-fiction streaming service covering science, nature, history, biographies of real characters of consequence and pretty much anything else you can think of. Learn about our natural world alongside luminaries like Sir David Attenborough. Look at our universe with wonder as Michio Kaku and Brian Greene broaden your perspective on space, time and the future. Step back in time and explore dinosaurs, ancient history, and the rise of homo sapiens. Curiositystream also offers CuriosityKIDS, a dedicated collection of safe, entertaining and inspiring programs for families to enjoy together or for kids to watch on their own. Let CuriosityKids spark a love of learning and a passion for exploration. Plus, all CuriosityStream shows are downloadable so you can keep kids entertained while on the go. Whether your kids are budding astronomers, paleontologists, or historians, CuriosityStream has got you covered with award-winning, ad-free content. Join more than 13 million CuriosityStream subscribers and explore thousands of brain-boosting documentaries. CuriosityStream membership benefits: - Unlimited streaming of the best in documentary programming - Download shows so you can watch anytime, anywhere without an internet connection - 4K and HD documentaries available on multiple devices - New content added weekly so you’ll never run out of things to watch - Browse titles with multiple search tools to help you quickly find your favorite subject areas - Rate your favorite shows and get recommendations for related content - Bookmark shows to watch later or resume watching previously viewed shows on other devices Memberships start at just $2.99 USD per month (plus applicable tax). You may cancel your membership and stop the billing anytime by logging into your account. Please Note: - Payment will be charged to the user's iTunes Account at confirmation of purchase -Subscription automatically renews unless auto-renew is turned off at least 24 hours before the end of the current period - Account will be charged for renewal within 24 hours prior to the end of the current period - Subscriptions may be managed by the user and auto-renewal may be turned off by going to the user's Account Settings after purchase By downloading this application, you agree to the CuriosityStream Terms of Use (https://curiositystream.com/terms) and Privacy Policy (https://curiositystream.com/privacy). 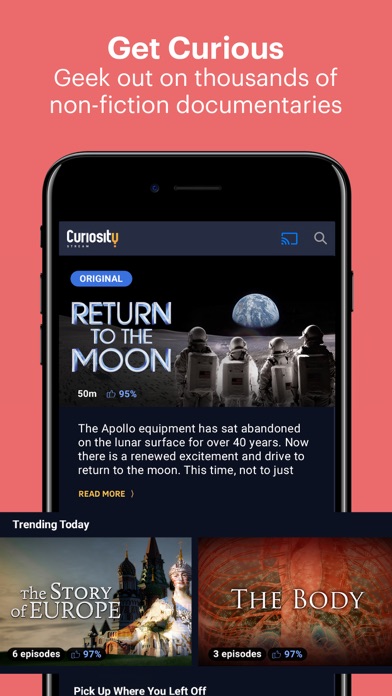 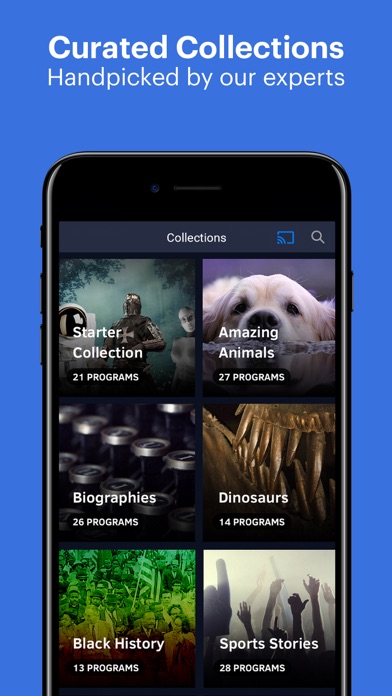 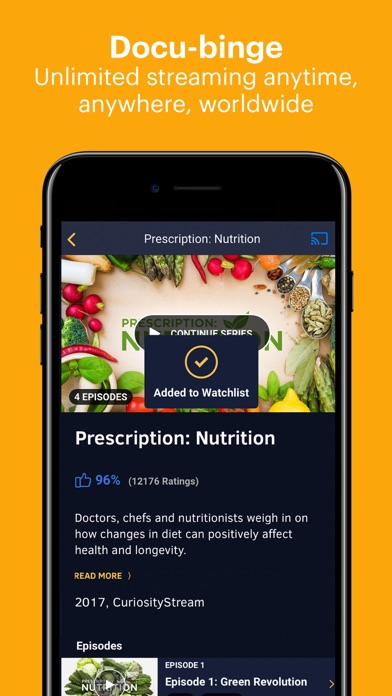 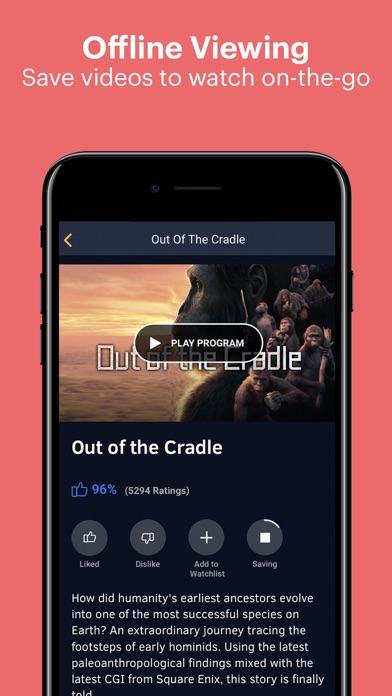 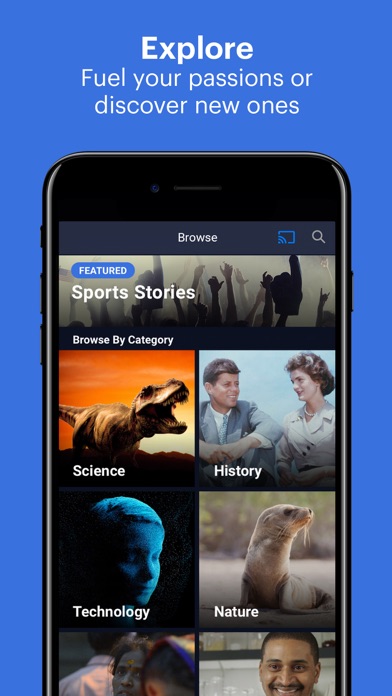 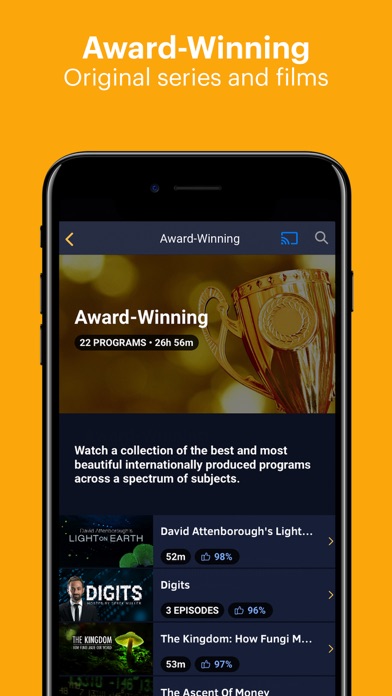 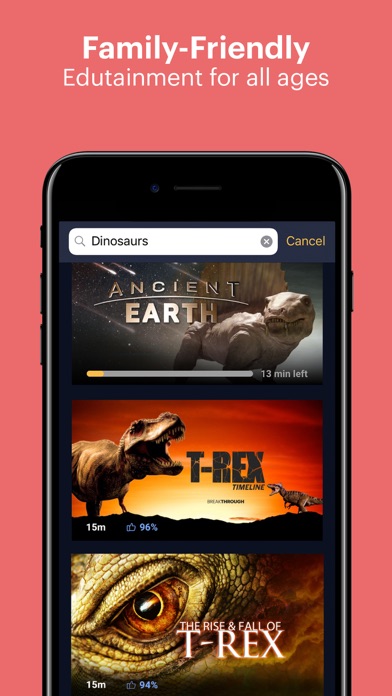 I am watching on the iPhone 11 and I am unable to watch any program in landscape without the app freezing up. After it freezes up no matter how much of the show I have watched it does not show up in recently viewed. I have closed and re started and deleted and re downloaded but neither worked.
By itinerant-thumbs

This streaming service has glitches. Love the documentaries but every time I get out of the app and back in it rewinds to the beginning. Super annoying. Also the app freezes constantly and I have the newest iPhone and a fast internet. Can’t figure it out.
By internetpatrol752

Lots of titles and more and more are being added everyday, however there is many bugs and glotches in the app that deter from the experience. for example when streaming to chromecast when i move to pause the program it always restarts it when the app gets opened. many more bugs, hiring developers to fix these bugs would help the experience greatly.
By jgv1958

Making people educated again! We must support this type of television!! Enough of stupid “reality” and “ghost” tv shows! This is the renaissance of TV!
By AP_520

Easy to navigate through and watch hundreds of documentaries, fantastic pictures quality. For a new company they’ve done a great job so far. Keep it up!
By Wfi007

The price is great but the content is very poor don’t compete with NAG or discovery at all, I thought since the owner is the founder of discovery channel the content would be head to head with such channels
By KKamel

I’m already in love with this app! Such a great selection of documentaries on a wide variety of topics. The price is very reasonable for what you’re getting.
By samantha aida

Thanks for this great product!!!

I really enjoy the content of Curiosity Stream. I thank for it. I signed up for the life time membership and wish you a great future and more useful and intelligent content.
By kkhartit

No way to turn off autoplay

I listen to a documentary as I go to sleep...so because it lacks the basic function of being able to turn off autoplay is a major issue for me. I go to sleep and wake up two documentaries later with Hitler shouting in my ear. (Yes that happened...and I don’t listen to WWII documentaries) I’ll be deleting it.
By Kaekaed

The content is impressive, well worth the subscription. On other streaming services, I have found documentaries lacking. It’s usually one or two good ones hidden in a pile of overly dramatic, patronizing docutainment narrated by hosts whose last job was narrating commercials for selling trucks or “rad” 80’s children's toys. It’s those or reality tv style crud. This service is way better. Everything I’ve watched so far seems facts driven instead of shock/gross-out/train-wreck driven. I do understand some viewers may prefer the more human angle and less facts and data. There are plenty of documentaries on other services that will show you an impossibly specific (made up) family story that could have happened based on a glass pane found in Pompeii to pull at your heart strings and help you care about about glass but I’m glad there is still a service still putting out documentaries that just cover glass because glass is interesting. They are getting harder to find.
By Pkjcggyv