HBO NOW is the streaming service that gives you instant access to all of HBO. In addition to getting new movies every week, you also get news, comedy specials, smart talk shows, thought-provoking documentaries, and the special events everyone’s talking about. Getting started is easy. Just download the app to sign up for your free trial (afterward just $14.99/month. Free trial is for new customers only.). Watch on your favorite screen—phone, tablet, connected TV or gaming device—and on your computer at HBONOW.com. Cancel anytime. Your subscription automatically renews unless auto-renew is turned off at least 24-hours before the end of the current period. Your iTunes will automatically be charged at the same price for renewal, as stated above, within 24-hours prior to the end of the current billing period. You can manage your subscription and/or turn off auto-renewal by visiting your iTunes Account Settings after purchase. HBO NOW® is only accessible in the U.S. and certain U.S. territories. Some restrictions apply. ©2019 Home Box Office, Inc. All rights reserved. HBO NOW® and related channels and service marks are the property of Home Box Office, Inc. For help, please visit help.hbonow.com. Privacy Policy: https://play.hbonow.com/privacy Terms of Service: https://play.hbonow.com/terms Manage sharing your data at: http://warnermediaprivacy.com/do-not-sell 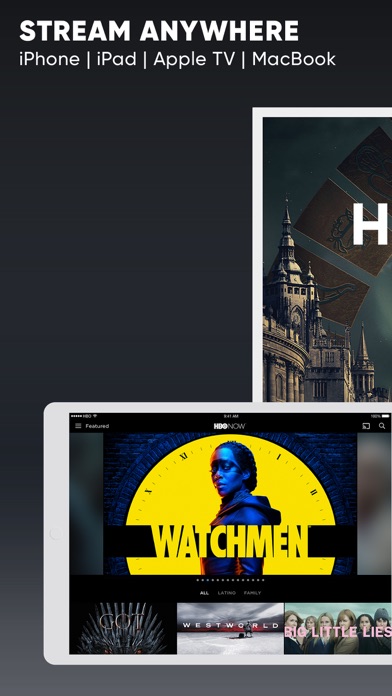 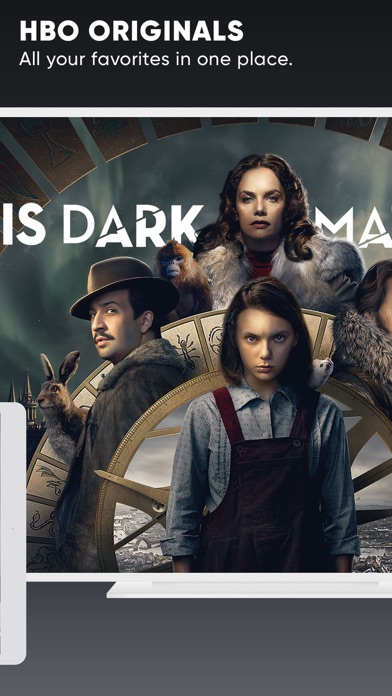 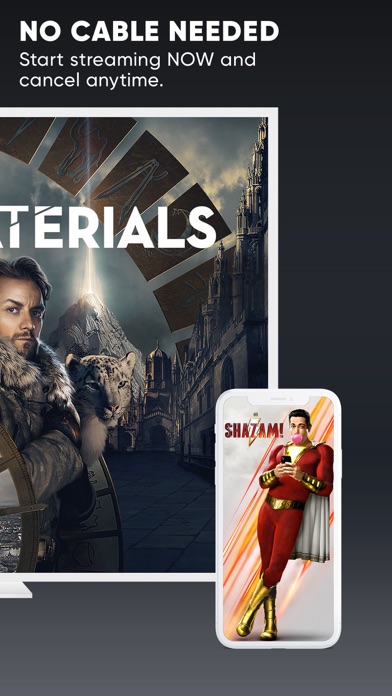 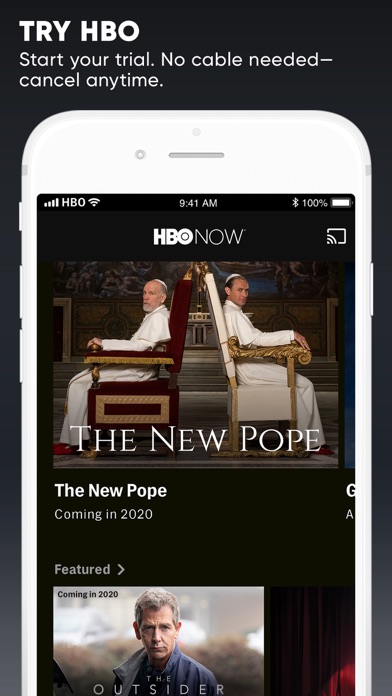 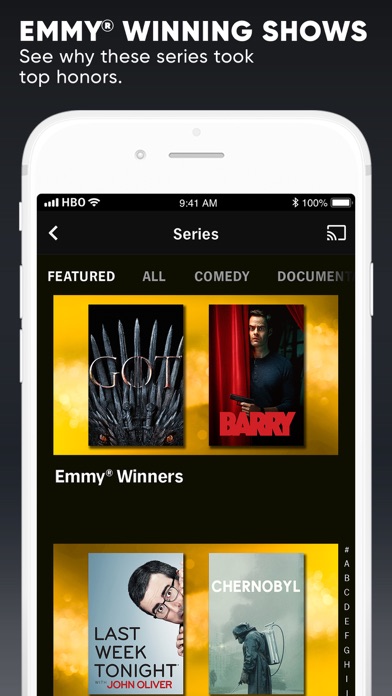 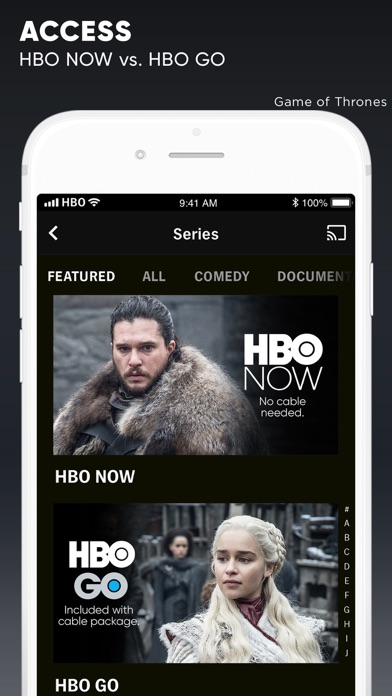 I only have this app to watch a show on here and after I finish the show I’m deleting it and my subscription. The app is slow annoyingly hard to use and overall really aggravating. It takes forever to load my show and while I’m watching the “unable to play this” whatever sign always comes up. At first I thought it was my WiFi or internet by my Hulu Netflix and YouTube all play perfectly fine.
By The yellow cup

Shows and films (mostly films) on the app that are presented in an aspect ratio wider than 16:9 (which look wonderful on the iPhone X and above) still have black bars on the top and bottom, why? I can zoom in but then it’ll crop more than just the black bars. Netflix, Disney+, Apple TV+, along with several other streaming platforms are optimized for taller displays and will usually fill up most (if not all) of the display so why can’t HBO NOW? I hope that with HBO MAX this issue is addressed if it isn’t going to be fixed now with an update. I also hope that the black bars aren’t already burned into the content (which would make sense as to why I still see them). My only other issues are that the UI is a little clunky, there isn’t a skip intro button, and you can’t create user profiles (which I assume HBO MAX is the answer to).
By CMCMarley

For a company that has the brass tacks to flip Dish the finger and win, a company that has the money to turn out emmy award winning programs year after year, there is no excuse for such an abysmally poor app after nearly ten years of mobile computing. The app randomly crashes, freezes and misbehaves the same as it did 5 years ago and all we hear from HBO developers is lip service saying “we strive to make you experience blah blah blah”. Shut up with the feigned interest in our experience already. If you cared you would fix the app. Since you haven’t it is obvious you don’t. Either hold you developers feet to the fire or just fire them and outsource to a company that CAN write an app. Pathetic and inexcusable. Developer response: Thank you for taking the time to review our horrible excuse for an app. An app that hasn’t seen any real improvements since we launched it year and years ago. I for one am just paid to put a response here without reading what you said in order to cast the illusion we as a company care about you instead of your money. We will get this right over to somebody who cares just as soon as we can figure out who actually does. Be sure to give us a 5 star rating and tell your friends!
By Whoopmeister

Sadly it is easier and cheaper for me to wait on content and buy episodes or seasons via iTunes than to subscribe to a service that seldom works or malfunctions mid viewing on EVERY platform. Even switching to the browser and no matter what internet service provider or method of access I use it seldom works through an episode or the first five minutes of a movie. The price for access doesn’t account for these disruptions of service. The error codes are a bazillion characters long and not worth investigating as a subscription doesn’t really allow for accommodation. However, if I had an episode that had issues which has probably happened less than three times in this digital age Apple can and will provide a refund or credit. This is just terrible. If you do not have cable or a provider ie satellite or Sky for those overseas - this is worthless no matter the device or point of access.
By missvhe

This app is useless. Takes forever to stream a 30 minute episode, since it keeps freezing. What was HBO thinking?
By RM-20

Never been great functionality now won’t play anything at all

3 MONTHS OF NOTHING UPDATE - STOP TELLING PEOPLE TO DELETE/REINSTALL FIX THE APP It’s one of the more expensive streaming apps on iTunes and it hasn’t worked for months now. All recent reviews saying the same thing and instead of owning the shoddy work and refunding people who’ve not been able to watch a thing, you give a bunch of instructions THAT DON’T WORK I’ve had the app for years now and while there have always been some bugs and bad design issues with this app, about a month ago it stopped playing shows altogether. I get the blue loading dots for a few seconds then the screen goes black and nothing happens not even an error message. It’s not my connection (Netflix, Hulu and Showtime via Apple TV is working fine as usual, I can stream two of them at once so there is absolutely no slowing of my internet speed) and I’ve tried deleting and reinstalling a few times. Still nothing. Helpfully HBO who ignored my messages for months did send me an email in reply to this. Giving me trouble shooting advice that covered the steps I already said in the the review I’ve taken. Then asked if I would like to update my review so I did. Ignores long term paying customer getting zero service. Only responds when a public review is left and the response ignores the actual issue. So yeah my updated review is that the Starz and Showtime apps I’ve replaced HBO with are better. The only thing I’ll miss programming wise is John Oliver but as I can’t watch him anyway I guess that’s not a miss either.
By DjinnAE

If this service a was $9.99 a month, I would keep it. But at $14.99 per month, I find it hard to justify the price when other streaming platforms like Netflix, Hulu, and Disney+ are far less expensive and offer more content. Canceling and deleting this app. 👎
By Jmsan5

Ninety-five percent of the time when I try to start a program I get the three blue “loading” dots for two seconds then the screen goes to black. On iPad with latest software. Why am I paying for a service I can’t use. If this were cable I could contact support and get credit for time out of service but no way to do that here.
By Crush-er

Playing by T-Mobile is not really good

Title is. Not every time, but usually. After loading (about 2 seconds), no errors, no videos.
By ZhenxiChang