Records your talk or snoring while you are asleep (automatic or manual sensitivity level, records only snoring using smart snoring detection), creates the graph of noise in room during the night, takes the total time of snoring down. Snoring detection is based on artificial intelligence (A.I.) with the support of a new Apple machine learning technology. By using a large number of snoring samples, we can achieve high accuracy in statistics and in snoring detection itself. HIGHLIGHTS: - ADJUSTABLE RECORDING SOUND SENSITIVITY: For different sound conditions in your room (a quiet or loud environment). - HIGH TECH SNORING DETECTION: Accurate snoring detection based on A.I. - POSSIBILITY OF RECORDING ONLY SNORING - AUDIO VISUALIZATION DURING RECORDING OR PLAYING - FAVORITE RECORDINGS - SHARING RECORDINGS WITH YOUR FRIENDS: Send recordings via email, iMessage or post to Facebook. - AAC AUDIO COMPRESSION FOR THE BEST RATIO QUALITY AND SIZE - CHART OF NOISE IN THE ROOM DURING THE NIGHT - FACTORS, WAKE UP MOOD, NOTES: User can place factors (alcohol, coffee, stress etc.) to every night as well as the mood after waking up or add own notes. - ACTIVATION DELAY: Starts monitoring after a period of time. - BACKGROUND MODE: Monitoring runs also in background mode. Alarm also fires from background. - APPLE HEALTH INTEGRATION - iCLOUD SYNCHRONIZATION: Synchronization among your devices and between free and paid version. - EXPORTING HISTORY TO CSV FILE - APPLE WATCH: If you buy SMART ALARMS then it will track your sleep movements and it can play haptic (sound, vibration) if alarm is set. If you buy STOP SNORING then it will play haptic (sound, vibration) if snoring is detected. PLEASE NOTE THE FOLLOWING: * It is recommended to connect your iPhone (iPad) to a charger. * Set "Airplane Mode" or "Do Not Disturb" on your iPhone (iPad) for undisturbed sleep. * Place your iPhone (iPad) close to you with the microphone towards your bed. CUSTOMER SUPPORT Happy customers are our highest priority. If you have a problem with our app, please contact us at sleeprecorder@apirox.com. 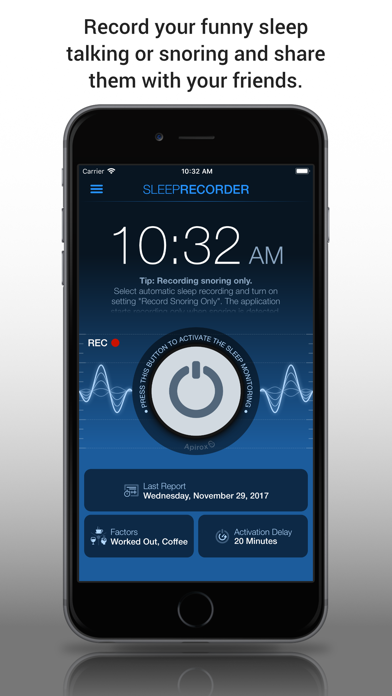 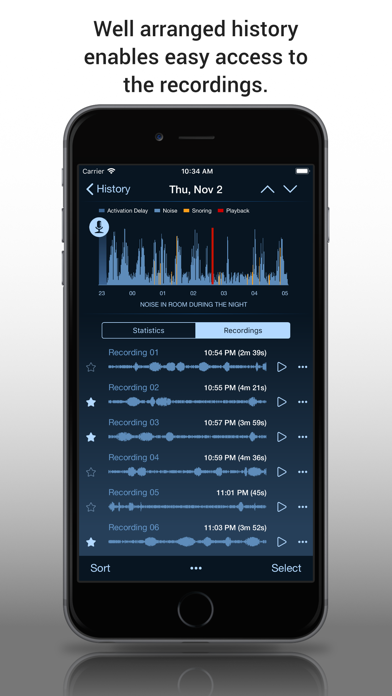 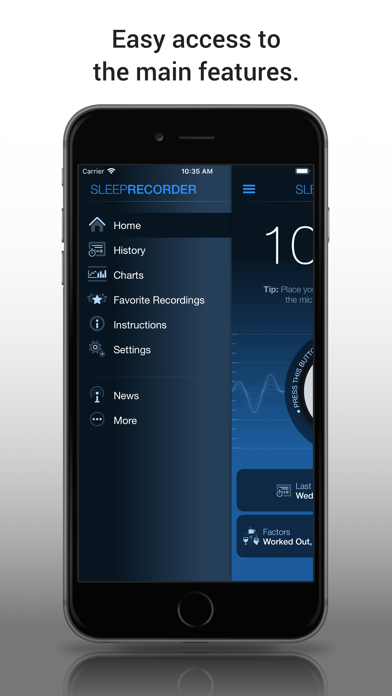 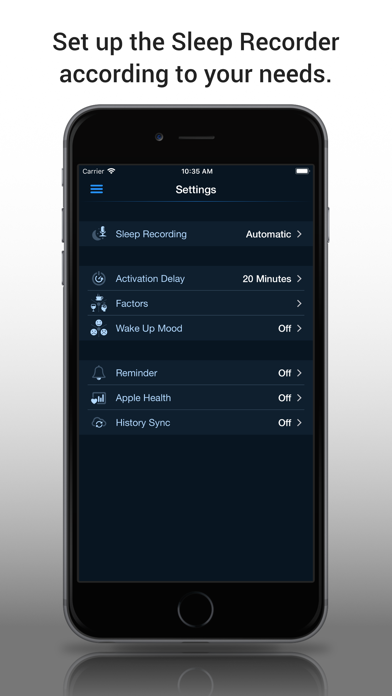 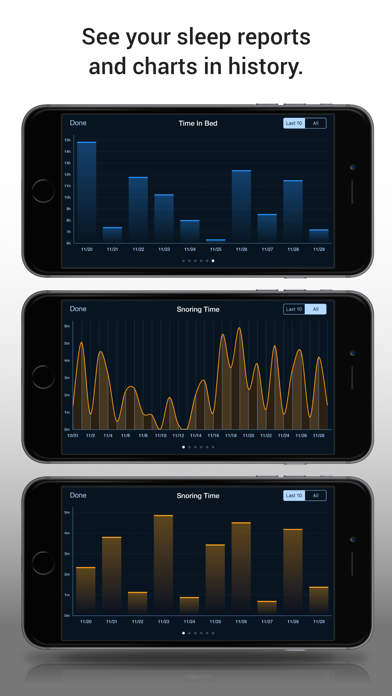 Needs to have a way to rewind

Works great, and I leave my phone next to my CPAP. Never picks up anything from the machine, and I left it on it’s normal settings. Crystal clear recordings each morning for my entertainment.
By Bishop_SWN

Idk if this is a coincidence, but the same day I got the app my phone started telling me I had no SIM card and it was making my texts weird. I know others have had similar problems, leading me to believe there’s something wrong with the app. I never even used it lol
By Nixiemylove

So I thought I would he a weird sounds or weird voices. But instead it just recorded my dog snoring! It’s hilarious because my phone was right near her cage and she was snoring all night it was so funny.HAHA so funny anyway that’s all I had to say tell everyone that this app is amazing OMG so amazing everyone make sure they download this app.
By Daisy water

I have a loft bed so all I got was the sound of my bed moving when I went back to look at the recording. And I have to get the lite version just to hear thing for they most of the time I am asleep. So overall it didn’t help at all and I know from experience the lay I talk in my sleep but I thought it would be fun to see what I say and if I snore but this app does not help with that at all. I do not suggest downloading and I really wouldn’t pay for the lite version. Overall I think it is a waste of space and time and money.
By MACiE M....

First of all this app isn’t worth it if you don’t pay the extra $3. So, understandable that you have to pay I guess, but I am currently unable to pay for that and also don’t know if I would want to spend that because all I wanna know is if if I sleep talk. Since I can only listen to the first 15 recordings all I hear is me rolling around or maybe a few of me snoring. I’ve adjusted the activation delay to 3 hours now so hopefully that will help with the rolling around. However, my biggest concern is that the app will record hours of a sound that is constant in the room. It will record a fan, or a sleep sound, or maybe something outside that’s going all night. Even if I did pay the $3 this is something that would be super annoying to me. I just wanna hear me sleep talking or a sound that is a once or twice occurrence that I wouldn’t have known happens. Instead I get a tonnn of recordings of this same sound throughout all of them. Basically my room would have to be close to dead silent to actually be able to pick up on just the sounds I’d want to hear. This is unfortunate because I think this app is actually a pretty cool one and will work for most people as long as they make the $3 purchase. I just don’t know if I’m completely sold yet because of this issue and I’d like to see the the app developer work on this issue past just having the option to lower or higher the sound sensitivity in settings which doesn’t compensate for the constant sounds one may have in their room. This adjustment will help but it won’t be able to pick out one sound from another and just show you the sounds that matter from my experience.
By Jenny bunch kin

Was very informative I like it a lot
By Appisjunk

There was a little girl laughing

I was going to bed and then I turn on my sleep recorder as soon as I went to sleep I live alone and all the doors were locked and then a little girl started laughing like hehehe~ and I got scared and I called my sister and she let me stay and I turned on the recorder again and still heard the laughing but it was a girl and a boy we were scared when we heard this please fix this.
By Eveisadino

I started out by downloading this app just for entertainment purposes, and ended up paying the 3$ to have no limitations because I loved it so much. I wanted to see if I was a sleep talker & If I happened to snore at all during the night to see what my future husband may or may not have to put up with!! Well to my surprise , I do not sleep talk much but I do snore pretty loud. It was really interesting to hear myself. I highly encourage you to download the app and try the LITE version for a night. If you like what you hear and are intrigued to hear more , buy the full version. It’s really affordable and only a one time payment.
By Nerual eiram

I have the free one. It works. Mostly it picked up on my cats breaking things but i got a few audios. Tried it for one night it and let me turn off my screen so i dont destroy my phone.
By Mtyiiigg679

Wheel of Choice Plus