Photo GeoTag allows you to geotag JPEG, PNG, PSD and TIFF files, or change the existing geotag information. It’s a great way to add or correct the GPS properties of any JPEG, PNG, PSD or TIFF file! Have a lot of photos with no GPS values? Now you can easily geotag them. Have photos with an incorrect GPS location? Now you can easily correct the GPS location. When you open a JPEG, PNG, PSD, TIF or TIFF image file with Photo GeoTag, the image and a map are displayed on a single window. If the image has GPS properties, a map pin is placed on the map representing the GPS location. To change the latitude and longitude GPS properties, simply drag the map pin to a new location. To add the latitude and longitude GPS properties, either specify the address, or the latitude and longitude values, or simply shift-click the map and a pin is dropped on the location you clicked. It’s that easy! To update the altitude, click the altitude button. No changes are made to the file until you save your changes. A batch mode is also available for assigning the same location to multiple files. Major features include - Change the existing latitude and longitude location of a JPEG, PNG, PSD or TIFF geotagged file. - Add latitude and longitude location values to a JPEG, PNG, PSD or TIFF file that has not been geotagged. - Add or update the altitude to a geotagged JPEG, PNG, PSD or TIFF file. - Import GPX track and waypoint data for reference only (to automatically set the photo location according to timestamps from GPX data see our app “GPX Photo Geotagger”). - Inspector drawer shows image metadata. - Send the location to Apple Maps. - Choose OpenStreetMap as the map source. - Image is no longer recompressed. - Batch mode for processing multiple files at once. - Displays file metadata. - Export file metadata. - Show satellite view of location. - Edit or add photo creation date. - Export screenshot of map. Important Note: You cannot edit photos directly within the Photos library (this is also true with other apps such as Preview). You must export the photos, geotag them, and then import them back into Photos. For troubleshooting and more info, please click the Support button or visit http://geotag.modesittsoftware.com 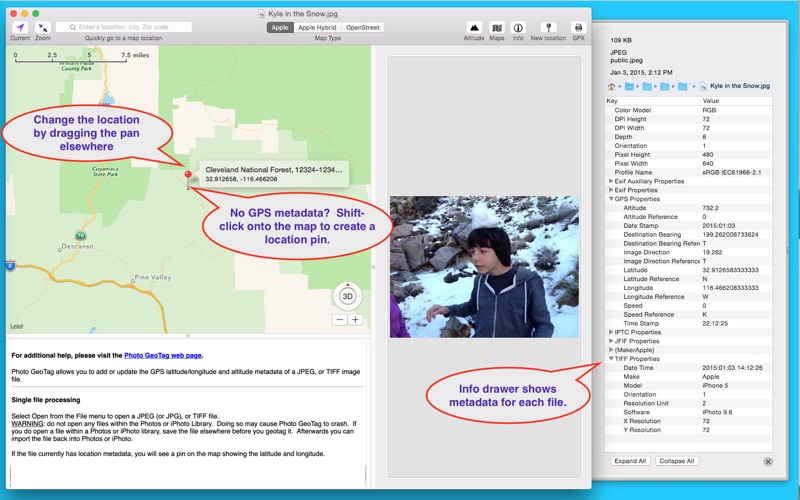 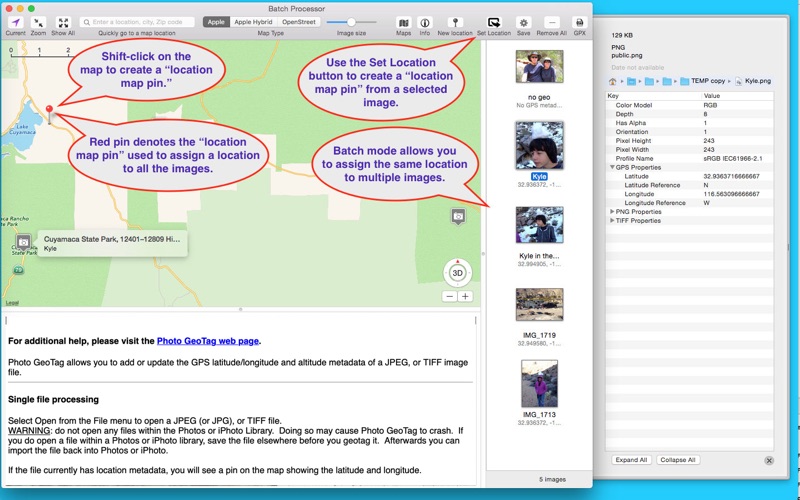 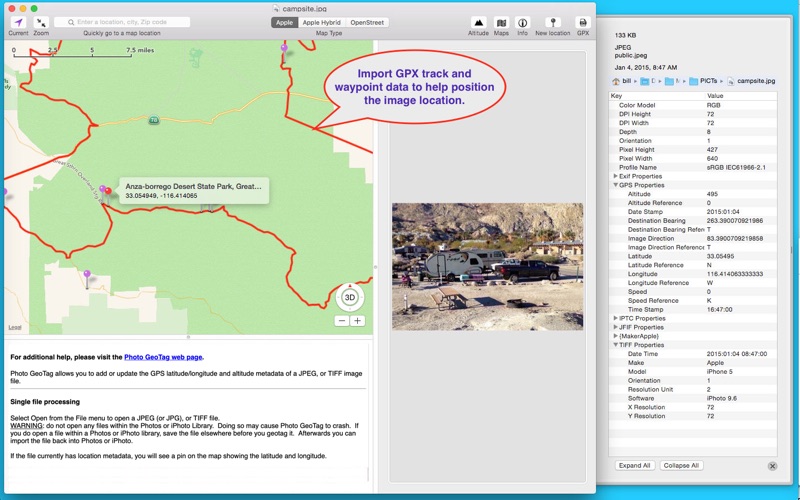 It doesn’t have a built-in image browser, so you have to drag in photos. Tried to drag photos in from Adobe Bridge and it crashes, every time. Useless to me, I want my money back.
By Dean Moses

Change GeoTags with ease. Only caveat, wish I could drag-n-drop to open other photos on it
By needcaffeine

Exactly what I wanted

All I needed was an app to easily modify date and location information - without changing anything else. This app appears to do that. I definitely did not want the image to be modified (i.e., recompressed) in any way. As far as I can tell, this app meets all my standards. Highly recommended.
By ReaganB

Works fine for me

Works as advertised. Price is good. Developer was helpful in fixing a minor bug promptly
By GeoSlag

The app is basically OK in that you can geotag a photo. It is not as easy nor as efficient as it ought to be. I hike and mountain bike with my camera and the hike/bike trails in our state parks are not in the App’s map. That means that for off-road photos, you will always be guessing to some extent. When I add GPS data to one picture, in general the next picture will be close to the previous one, but this app doesn’t assume that. It backs its view out a few thousand miles so that you have to zoom in to the same location for picture after picture. Possibly I can work around this. For a low-priced app that does its most basic job, it is OK. A couple of small improvements could make it better.
By Math teacher in WA

Well that’s a bummer. I bought this app to make up for the GPS shortcomings in Photos. Paid my $4, launched the app, and the first thing it says is “Do NOT select a file from the Photos or iPhoto library.” So I’m supposed to copy my pics to a new folder, process them, and then somehow put them back in Photos? No thanks, that sounds like a recipie for disaster!
By Electrobrain

App is a mess

Confusing interface. If you were hoping to easily add location data to existing images in Apple Photos, not the case. $0.99 would be an acceptable price for this app in its current state.
By btron77

I use several cameras while traveling, only one of which has a built-in GPS location recorder. I often turn off the GPS feature of this camera to save battery life and sometimes forget to turn it on before a photo shoot at a new location. The result after a photo-shooting trip is a collection of photos, only some or none of which have location information in the metadata. I used to use iPhoto to manually set the approximate location from a map, but the new Apple Photo program no longer supports this handy feature. Photo GeoTag not only provides a workaround, but it is much better and easier to use than the obsolete iPhoto procedure. For example, the dual display of map and satellite view made it very easy to pin a location for a set of photos taken in a forest campground. The map provided a detailed view of the bends in the road, and the satellite view allowed me to peg the picnic table of the campsite. Once the location has been identified, it is very easy to place the latitude/longitude information in the EXIF part of every photo of a batch of photos. Photo GeoTag also allows batch processing of unmarked files from one photo that has location information. I take one snapshot with my iPhone and use its location information to tag all other photos taken from the same general spot with other cameras. This is simply done by clicking on the iPhone photo, then using the Set and Save commands in Photo GeoTag to transfer the location to all photos that have been dragged into the app. No keying in of lat/lon numbers is required. This app is easy to use and has a very good interface. So far only a couple of issues have arisen. During batch processing, sometimes the captions below each photo in the batch confirm that locations have been altered after the Set command has been clicked, but only when the display window is adjusted in some way. Sometimes it appears that the batch operation has not worked at all because none of the captions under un-tagged photos give a confirmation, but when the Save button is used, all photos have indeed been properly tagged. Despite the fact that altitude information can be extracted and placed in a photo in single-photo mode, the altitude information contained in a iPhoto metafile is not transferred in a batch operation. These are all minor irritations. This app has allowed me to move on to Apple's Photos while not losing my ability to post-process a photo to include location information. The actual photo appears to be completely untouched, which is important in preserving image fidelity. Well done.
By Burque Photophile

New version is much improved - No more file size issues

This simple app provides an easy way to add location information to photos. The developer recently updated the app so that it doesn’t re-compress JPEGs like the old versions did. File sizes now stay the same as the originals. Great!
By MrThreepwood

Does its job but does not make it easy.

I doubt the developer uses this much himself since the finess is missing. It functions however, when I have lots of pictures the inability to even copy the GPS coortinates from one picture to another or from the map makes it hard to edit a lot of pictures. I found that once I got a location i had to write down the GPS I pinned, type it in and then copy it so I could paste into the other pictures. Was more time consumg that I whought it should be.
By kcmacpro

Hot Springs of the USA