Story: Everyone's favorite LINE character, Brown, has taken up farming! He's having a bit of trouble getting started, so the rest of the Brown clan have come to help him out! Learn how to make the best farm ever with Uncle Brown, the ""god of farming""! Live the farmer's life in LINE Brown Farm! Whether you're helping other LINE characters, visiting your LINE friends' farms, or shooting the breeze with the many others of the Brown clan, there's tons of farming fun to be had! Game: - Help out Moon, Cony, and other members of the LINE gang to get Coins! - The Little Browns that live on the farm will help you out with all kinds of farming jobs! - Use Coins to build new facilities and to make your farm look awesome! - Ever wondered what your friends' farms look like? Visit them and find out! - Level up artisan Browns to trigger awesome events! Build your very own farm, your way, at your own pace! 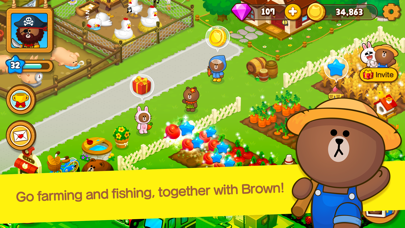 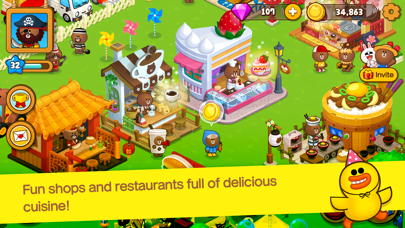 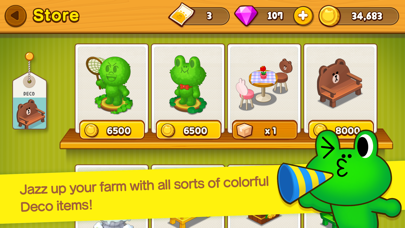 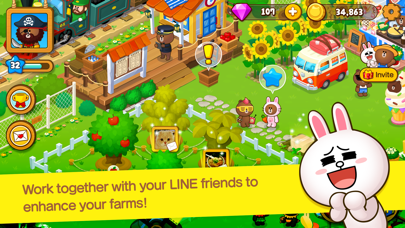 i like this game, it’s fun and i enjoy playing it.my main problem is the loading screens take forever and the bulletin board is useless.you can’t actually buy off it because by the time you click and arrive at the shop (after another loading screen) the item is gone almost everytime.do you have a million people accessing one board or something??so ultimately u can’t buy items and can’t progress the game very well.this really needs dealing with or i’m out...
By Smart1302

Wish to give it 5 stars

I really like the game. Yes it almost copy of hay day but still it nice. And I really would give it 5 starts but am facing 2 things. Hope it will be fixed in future. First the loading is really long to move to another farm. Or even from ur farm to ur room. It takes so long. Which I have no idea why. Really guys u have to work on the loading time. Second. Buying from board. Why we can’t just buy from board we have to go to the farm it self. Which with the nice loading time. 90% of the times. The items is just gone. And u will spend almost 1 min just to go there seeing it gone. And come back >.<
By Waleedalkahtany

Terrible and almost non-existent.
By Skooshi

It’s keep crashing and doesn’t let me receive any gems. Please fix it.
By kitty21_4

US is ugly stepchild

Not surprised the game is like it is, I have similar complaints for all of Line games and apps. Very little care or thought is given to all of us outside of Asia. We don’t get access to most of the good apps and games, we don’t get the free stickers that Asia gets - there are so many free packs Linked to company promotions for instance but we aren’t allowed to download them for some reason because we aren’t allowed to friend any of these official accounts so we don’t get their free Stickers. That’s just an example, but there are so many cool games I want to try but can’t because they aren’t available in our region. You’ve taken away games that I’ve played for years and years, discontinued utility apps that were cool, and same complaint with this game but in reference to the in app features. The app is greedy, for one.
By Jrg22

I can’t stop playing this game!! It’s so much in this game.I’m on 116 levels but still have so many things to enjoy with this game every day.I spent some money to buy the diamond in the beginning to build my farm but now I collected it a lot from each event without spend money to buy diamond at all.Enjoy your farm and all super cute stores!!!
By AmySwc

You think a game that’s three years old now would stop crashing. Fix the bug issue and it’s a 5 star game
By azzzsdaas