Experience a world where you can collect & trade your favorite Star Wars characters, weapons, spacecraft, memorable moments, and more with Star Wars fans across the galaxy! Introducing Star Wars™: Card Trader by Topps. Discover a whole new world of collecting! • NEW digital collectibles available every day! • Claim FREE daily bonus packs of digital collectibles • Claim FREE currency to increase pack-opening power! • Collect and complete sets to earn unique collectible awards Bring your collection to life! • Trade with Star Wars fans around the world – anytime, anywhere! • Trade-in duplicates or lower-tier cards to receive limited, special cards! • Complete missions to unlock special content! • Put cards in your sights in Lock On and add them to your collection! Customize your collection! • Showcase favorited collectibles on your profile. • Choose a character avatar to give your profile a special touch! *For the best experience, we recommend devices be updated to iOS 12 or later.* ----- MORE INFO Stay in the know about the latest SWCT card releases: - Follow @ToppsSWCT on Twitter - Follow @ToppsSWCT on Facebook - Follow @toppsswct on Instagram - https://www.youtube.com/c/ToppsDigitalApps 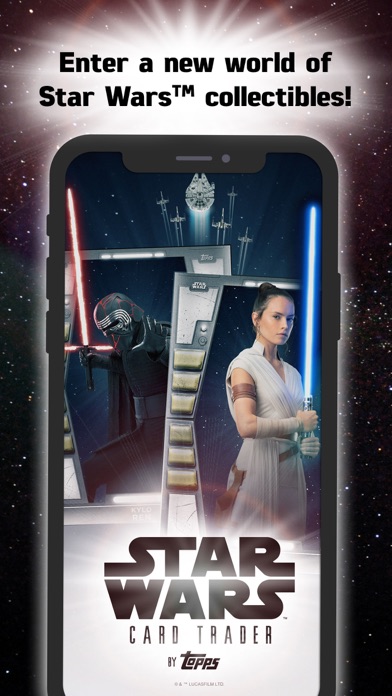 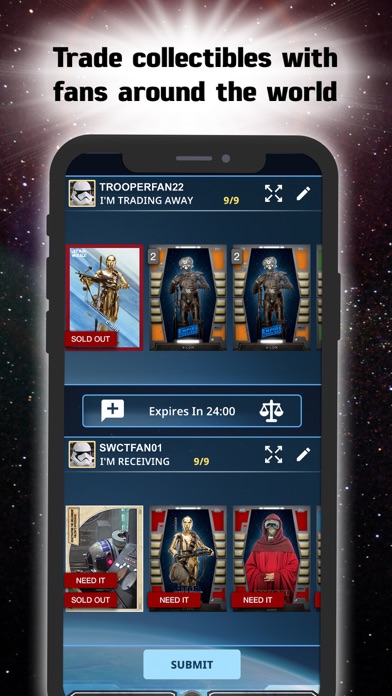 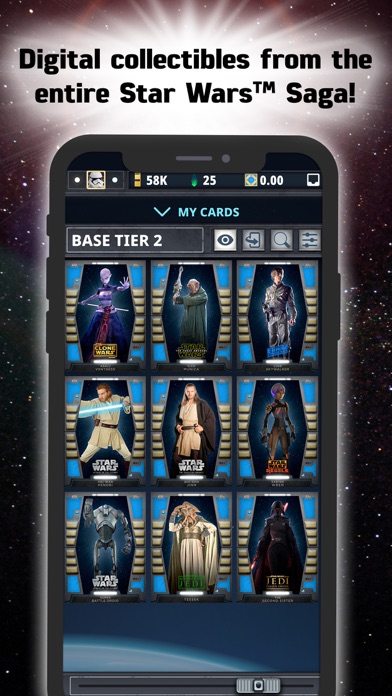 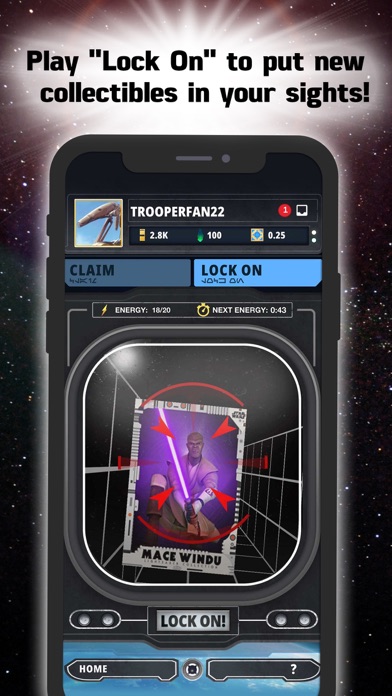 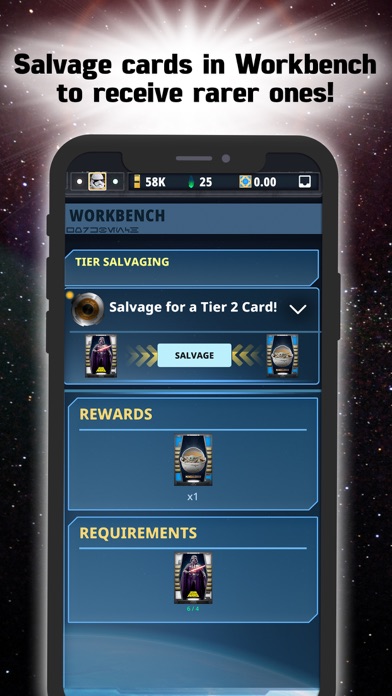 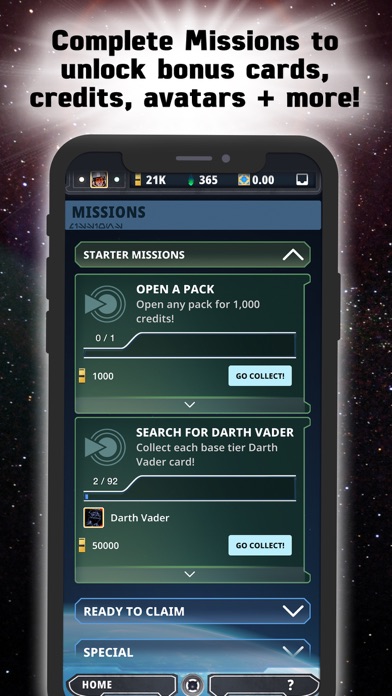 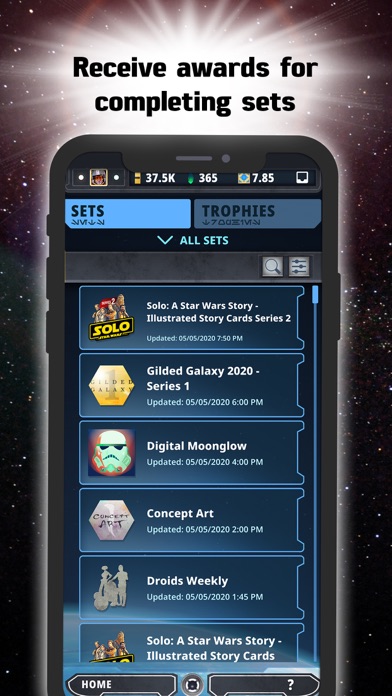 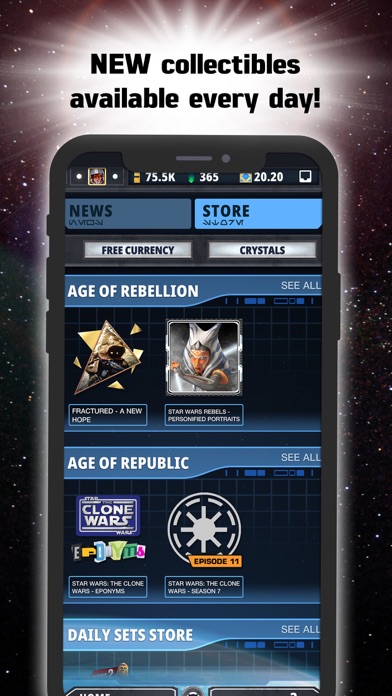 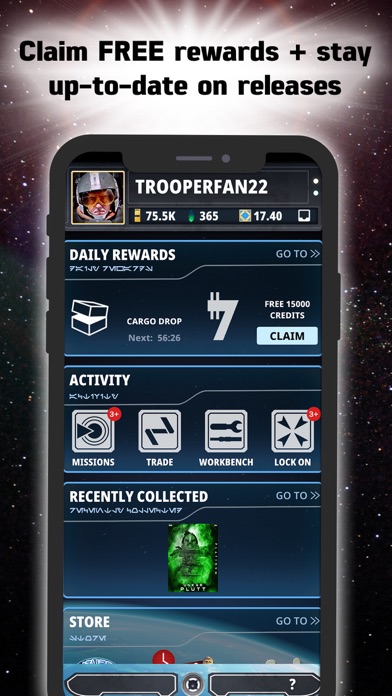 Latest version is better than ever

The latest update for the SWCT app brought a few niggling issues to an abrupt end and smoothed out the user experience entirely. New features, an enhanced trading partner matching system and polished look make the app more fun than ever. Download, enjoy and remember, the Force will be with you always.
By ThePrawns

The game has become more of a buy crystals and you get more. Trading has become hard to do. People don’t want to trade because it cost so much for good cards they don’t want to part with them. Also you have to spend a lot of time on it to keep up. To time consuming. You have to have no life!
By Chet 3

Just an ok app. Load screens take forever. Lock on takes wayyyyyyyy too long. Can’t sort years by color or sets. Getting lame. This used to be so much fun. Now it’s boring.
By zenfakor

Game is getting better

After 5 years of playing this game I have changed my reviews 4 times. Game was amazing in 2015-17 until they created crystals as main form of in game currancy, which I hated. But after time understood they prevent card farmers from ruining the game. Then Topps went crazy with Gilded cards which I STILL hate. But what can I do. Finally they completely changed the game engine so much so I had to totally re-learn how to play. I quit playing 3 times. But my love of Star Wars and of collecting has brought me back. For months the new game has many bugs and issues. I still don't agree with where some rarer cards are organized. But after this most recent update. It seems all issues have been fixed. So I change my rating from 1 star to 3. It will never be a 5 again. But if they fix the organization. Maybe a 4 one day.
By Newhorizans

Card trader could be better. The app is made for users who want to spend $$$. For credit users the Marvel Collect app is more fair. On the Star Wars app you get 2000 credits for opening 10 packs, but in order to do this you have to spend more than 2000 credits. 2 weeks to collect over 40 cards to complete set. The packs costs 5000 credits and you’re guaranteed 1 card for set, so technically you can spend over 100,000 credits to complete set. Madness!!
By DarthHulk64

They employees of this company are trash. The world would be better off if the idiots at Topps didn’t exist. Hey Topps employees you are trash do the world a favor and go play chicken with a truck.
By The ugly rice

Fun using this with my son and trading cards
By sandimascharvel

First off, I don’t wish to just bash this app. It deserves bashing and I’ll point out where it falls majorly short but not right away. I want to let people know that this can be a fun app and it has potential but I doubt it’ll ever get to its full potential. The cards are fun to collect. There is a vast array of different types of cards you can get throughout the whole Star Wars universe. There are more than enough collections to collect and daily cards to obtain as well. Doubles are to be expected and that is a good thing because you have to have something to trade with to get cards that you need. It’s a cool way to build community among other collectors. Beyond this...well... -to reel you in you get what seems like a lot of coins. Can be up to around 200,000 coins give or take a few thousand. -The card pack costs are too much...at least if you want a chance at getting the cards you want. Those 200,000 coins go really fast. -You can get free coins throughout the day but they’ll never make up for what you have to spend keeping you at a low coin amount. This is really annoying. You can fuse cards together to get free cards. With the Disney and Marvel collect apps, you only need 2 cards to fuse. With Star Wars they ask for 4 cards. Makes no sense...at all. -I’m still fairly new to these 3 apps (Disney, Marvel and Star Wars) but trading cards so far is weird. Out of about 20 trades only 2 people have even looked at what I had to trade. The others all the time expire. ??? Also, when it comes to trying to find a trade partner, most of the time it comes up as there are no trade partners. Then, once I keep trying a few times, all of a sudden there are like 20. -Cards actually sell out. Digital cards sell out? Then, I got to thinking it’s a ploy Topps does. If people see cards sell out, they’ll want to get them more causing them to spend more real money to get the fake card that they need. -The ratio of cards is sometimes not correct. If it calls for a 1:5 ratio to get a specific card, I’ve had it where I’ve opened way more packs than 5 and still have not received the card...once more spending more coins on the process. -Some card sets you HAVE to spend real money on or you can’t get them. The more real money you spend, the better cards you get hence the title to this review. Best advice I can give is don’t take this app too seriously or it will drain your wallet and just make you frustrated. Out of the many apps I’ve downloaded and there have been many, Pokémon Go is the only app that “kind of” gets it right. Just throwing that in there for you, Topps! I don’t care if I get a response to this review. I already know there are enough suckers who are spending money on these apps to keep them going which means Topps won’t change anything. Hope this helps those who have not download it yet.
By DC Superhero fan