Have unlimited access to your music in High-Fidelity sound quality with Qobuz. Enjoy thousands of creative playlists for all occasions, and let Qobuz help you discover new music with exclusive editorial content (interviews, reviews, articles). Listen to your music wherever you want, whenever you want: Qobuz is available on all your devices, even without internet connection in the Offline Library mode. ▶ Try Qobuz free for 1 month with no strings attached directly through the app. Since 2008, Qobuz has been dedicated to giving you the best streaming and listening experience: • Through sound quality Rediscover your music the way the artists and sound engineers intended. Enjoy more than 250,000 new albums and re-issues in Hi-Res (24-Bit up to 192 kHz) and more than 90 million tracks in lossless quality (FLAC 16-Bit/44.1 kHz, equivalent to CD quality). • Through musical discoveries Discover talents unearthed by our experts as well as highlights and specialised recommendations from all music genres. Listen to thousands of playlists for all occasions, curated by our team of music experts. • Through music knowledge To enrich your listening experience, enjoy access to informational digital booklets, track-by-track details of albums and other editorial content, including interviews, reviews and articles. Qobuz in depth: • Streaming in FLAC 16-Bit/44.1 kHz lossless quality (similar to CD-quality) for High-Fidelity listening of over 90 million tracks • Music streaming in 24-Bit Hi-Res up to 192kHz on over 250,000 albums for an exceptional listening experience, exclusive to Qobuz. • Hundreds of thousands of digital booklets and information on musical works • Thousands of articles, interviews and other editorial content • Creative playlists for all occasions • Recommendations from music professionals You can also: • Download your music onto your phone’s Offline Library to listen without internet connection • Make your own playlists and share them with your friends • Create your own personal library with all your favourite artists, albums and tracks • Download your purchases and listen to them on any media player app • Stream your music via connected listening systems: Google Chromecast, Music Cast, Audirvana, Roon… • Stream your music on all Hi-Fi equipment: Devialet, Naim, Klipsch, Bluesound, Yamaha, Sony, Aurender, Sonos, Harman Kardon, Moon… ▶ Enjoy a 1-month free trial to discover high-quality streaming with Qobuz. Not yet a subscriber? • Try Qobuz for free, with no commitment, for 1 month on the app (followed by a monthly subscription that will renew automatically) • Available monthly subscription : Studio Premier (CD-FLAC 16-bit / 44.1 kHz & Hi-Res 24-Bit up to 192 kHz) • Payment will be charged to iTunes Account at confirmation of purchase • Subscription automatically renews unless auto-renew is turned off at least 24-hours before the end of the current period • Account will be charged for renewal within 24-hours prior to the end of the current period, and identify the cost of the renewal • Subscriptions may be managed by the user and auto-renewal may be turned off by going to the user's Account Settings after purchase • Any unused portion of a free trial period, if offered, will be forfeited when the user purchases a subscription to that publication, where applicable • For more information, read our Terms of Use: http://www.qobuz.com/store-router/legal/terms Music streaming with Qobuz: there are subscription offers for everyone, all with equally high standards. Like what you see? Follow us on: • Facebook: @qobuz • Twitter: @qobuz • Instagram: @qobuzusa 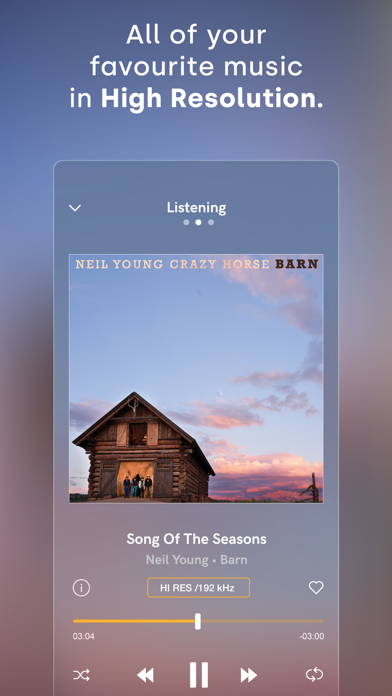 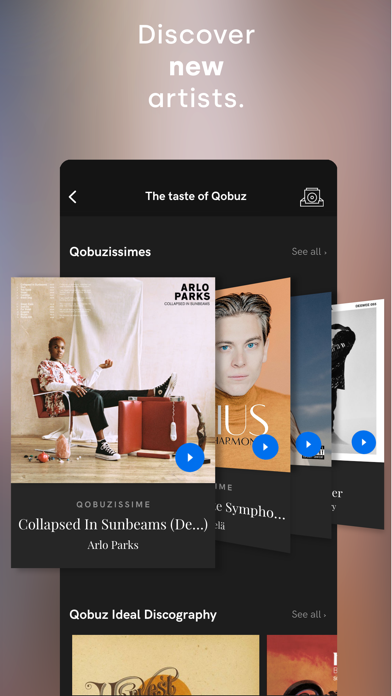 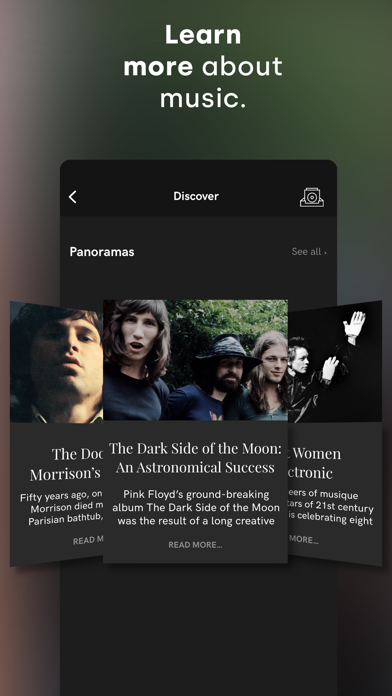 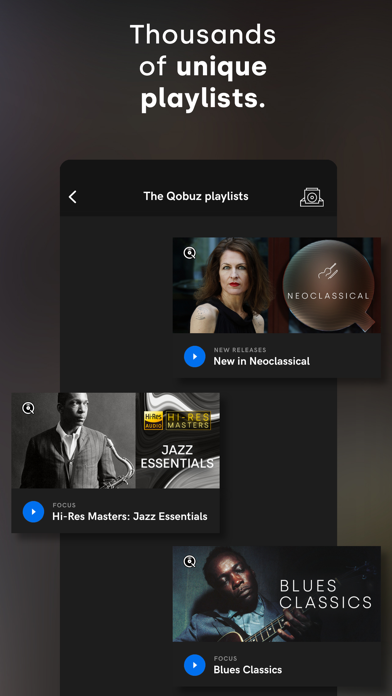 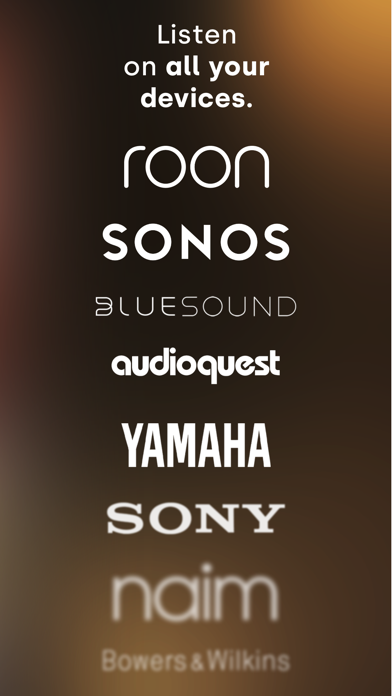 SOOOOO much better than Apple Music

There are two reasons I picked up this app. 1: I had used Slacker Radio for YEARS and am actually still using it today. However, their selection of music has diminished greatly. They used to have the #1 largest music collection in the world for streaming, but now their way down the list. Add to that the fact that even with the $10/month subscription you can’t reliably play on demand songs. It’s only like 80% of their stuff is “available” for on demand. That eventually made me drop the paid subscription altogether. So that left me with $10/month free for music, which leads to me reason 2: Apple Music has this very stupid, very annoying, and somewhat embarrassing issue where when I get into range of a Bluetooth device (say my car for example) the app opens itself and starts playing something. Sometimes it’s where I left off, other times it’s seemingly random. I hate that. I mean I genuinely despise that. I’ll pay music when I’m ready, not when apple decides for me. So Apple Music got deleted from my phone completely (that is the only way to solve the issue). So then I find this service called Qobuz. Hi-Res tracks? Yes please. Download to my device in Hi-res? Yes please! HUGE music selection? You’re reading my mind. Same price as LiveXOne (formerly Slacker)? I’m sold. So here I am a month in, loving every minute of this app. I’ve got it on my computers and my phone and I couldn’t be happier. Thank you Qobuz for making my life a little bit better! Try it folks. I’m sure you’ll love it too.
By nachocheese03

Qobuz's sound quality (IMO) is better than than all of the others (Apple, Spotify, Amazon, Tidal). I've done blind comparisons against all of the above, and either picked Qobuz each time or they were tied (except for Spotify which never won or tied any of the competition) with one or more of the others. Also, for reference, Qobuz via Bluetooth sounds better than Spotify wired to my DAC via MacBook. At one point, I was disappointed Qobuz did not offer a remote, but truth be told (and this is one of the reasons I love vinyl) I enjoy my music more when I can't skip around (easily). I don't know what's in the secret sauce, but keep up the great work. If I'm sitting for a critical listening session, there's no other choice than Qobuz.
By atodas0

Quite an improvement in 10 years I’ve been with Qobuz. The desktop app still needs some work tho but big boys use Audirvana anyway, so who cares. The catalog is very good, sorry whiners, there’s no garbage music here. And for those who like to complain about the lack of algorithm recommendations, same thing, you’re at the wrong place, Qobuz users know what to listen, no need mommy to tell them what to choose… By far one of the very best sound quality, no loudness crap or Atmos gimmick, just good people listening to some real music 😉 Next step, DSD? Go go go 👌🏽
By La Blatte US

Can we even change the shipping address?

Please add the option where we can change the postal code, I accidentally put the wrong one
By Heavyrock67

No shuffle in car mode

It does it’s one thing well

If you’re using Qobuz, it’s for the audio quality. It does that well. Everything else is mostly just acceptable. The mobile app works. It’s not great, but it works and is usable. There is no Apple TV app which is disappointing.
By whydoIneedanickname?.

I have been a Qobuz user for about 2 years. To my ears it’s the best sounding service available. I’ve tried Spotify, YouTube Music, Amazon Music, Tidal and Apple Music. They all sound good on lower end equipment, but on my main stereo setup you can fear the quality difference. I don’t have any MQA gear and thus have never heard that side of Tidal. I use YouTube Music for discovery and I also don’t want to give up my commercial free YouTube. So why 4 stars. Lack of good music discovery algorithms and auto generated playlists. This is a great feature on YouTube Music. I discover a lot of new music this way. Lastly, is a lack of a Connect feature like those provided by Spotify and Tidal. No Chromecast doesn’t count. It’s not gapless. Without Connect I’m forced to use the subpar apps from my streaming hardware (CXN v2) or a 3rd party UPNP app. All experiences that pale in comparison to using the native app. Qobuz, adding either feature would likely bump my rating to 5 stars.
By mindhead1

Great quality playback when hardwired USB. Doesn't really have a lot of music, which is weird for a music streaming app. Missing the ability to play a "radio station" based on a song or genre, and no Chromecast support for those odd streaming sessions (think house party). Basically a place you can stash digital albums. A solid 1.5/5, but I rounded up to 2 stars. Oh, and it recognizes my SMSL, Peachtree, and Manley DACs on the app, which is neat.
By mostlystreaming