PlayerFM is a top independent podcast player and podcast library, empowering listeners around the world to search, discover, save and listen to more than 20+ million free podcasts. Find your favorite shows and discover new shows focused on education, news, business, technology, sports, comedy, music, and more! Our podcast library is updated multiple times per day, ensuring we always have the latest shows and episodes. Plus, discover free audiobooks, documentaries, video podcasts and interviews with our human-powered catalog and advanced episode-level search. KEY FEATURES • Offline listening - When you're commuting and relaxing, your podcast player is still there for you, even with no wifi. • Seamless cloud sync - Follow it on your phone and you'll see it on your tablet too. • Social - Like and share favorite episodes. • Discover - See what's hot and trending. • Colors & dark theme - Match your style. • Podcast categories - Organize your shows into genres and moods. • Sleep timer - Let the podcasts sleep when you do. PREMIUM FEATURES PlayerFM Premium: • NEW Space Saver - Compress downloaded episodes, while maintaining audio quality. A 100MB MP3 could compress to 30MB! • NEW Relax & Sleep - Discover and listen to relaxing sleep sounds hand-picked by our editors. • NEW Custom App Icons - Choose from 9 unique app icons to match your home screen. • NEW iPad support - Explore the app in Portrait and Landscape views. • NEW Apple Watch support - Access playback controls and more, now from your wrist! • Ad-Free experience - Focus on the content of your favorite podcast episodes without the distraction of ads. • Play on multiple devices - Easily sync playlists, full play history, and resume playback across devices. • Playlists & bookmarks - Organize with playlists and timestamped bookmarks tied to your cloud account. • Theme editor - Full control on themes, cloud-sync all your themes, unlock all premium themes. • Turbo Fetch - Get updates early & often. Be the first to know! • Personal search - Locate any episode with ease from your subscriptions and playlists. WHAT THE EXPERTS SAY LifeHacker: "Guides you to smart, interesting podcasts" Tested: "Right from the start, I found the experience of using PlayerFM enjoyable" GigaOm: "Makes podcasts look cool again" SUPPORT & SOCIAL support@player.fm • twitter.com/playerfm • www.facebook.com/playerfm • blog.player.fm LEGAL Terms of Service: https://player.fm/legal Privacy Policy: https://player.fm/privacy Subscription Terms: Payment for subscriptions will be charged to iTunes Account at confirmation of purchase. Subscription automatically renews unless auto-renew is turned off at least 24-hours before the end of the current period. Account will be charged for renewal within 24-hours prior to the end of the current period, and identify the cost of the renewal. Subscriptions may be managed by the user and auto-renewal may be turned off by going to the user's Account Settings after purchase. Any unused portion of a free trial period will be forfeited when the user purchases a subscription to that publication. 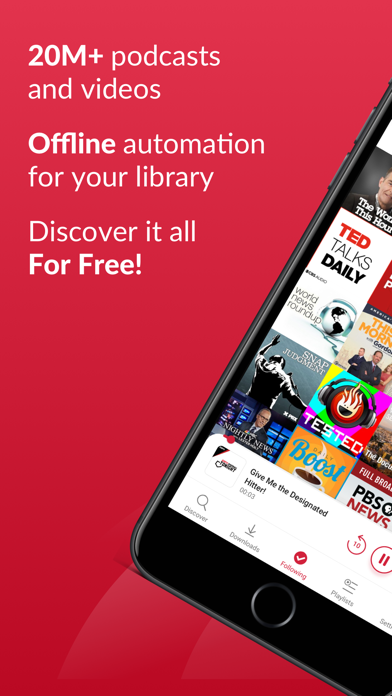 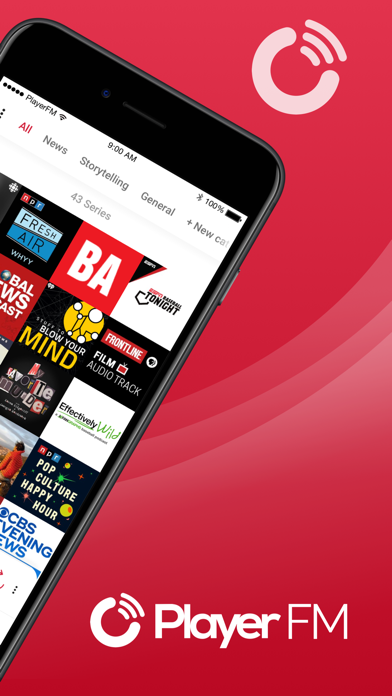 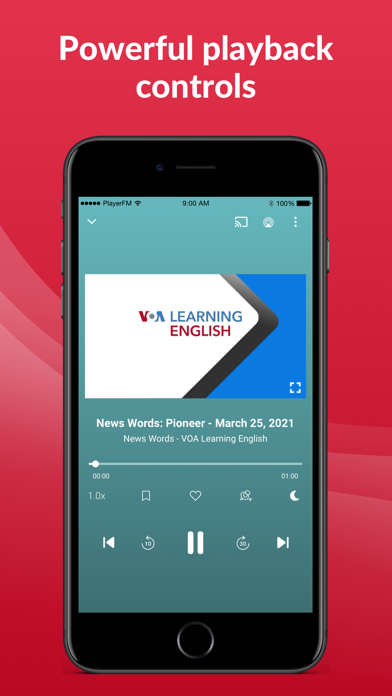 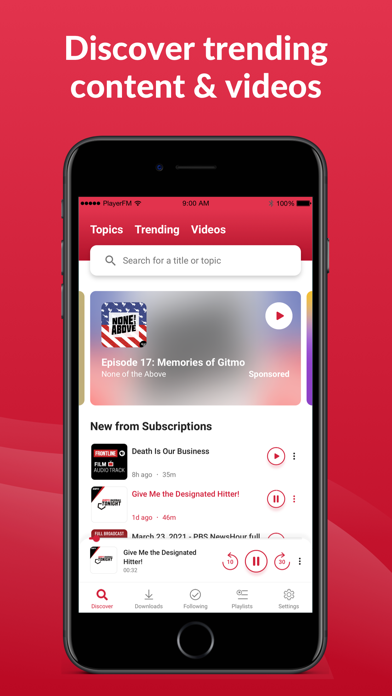 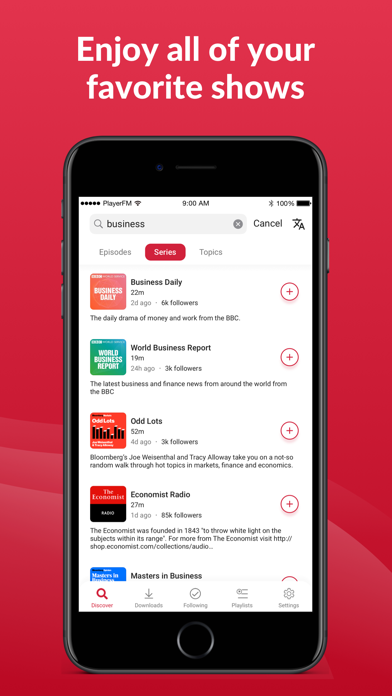 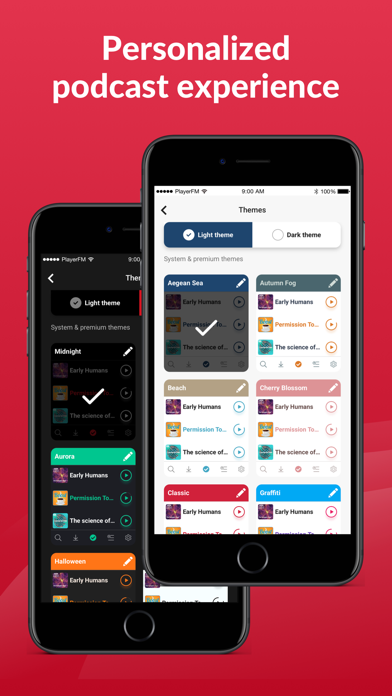 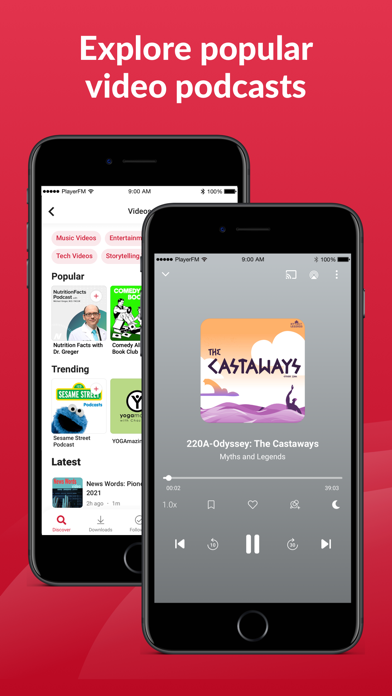 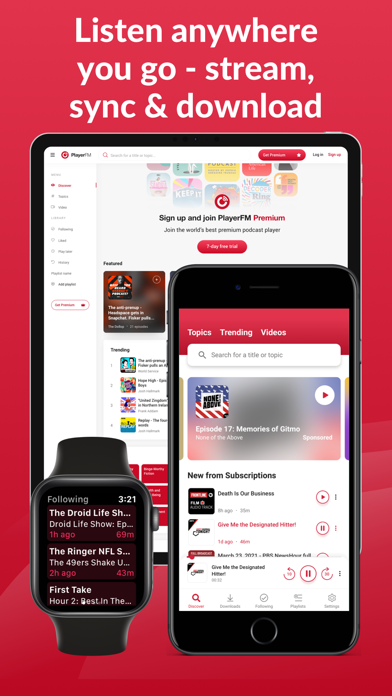 Downloaded podcasts start skipping 10-15min in. Only happens while playing through speaker, not Bluetooth. Also loses place of where I last left off.
By randyluu

I absolutely love so many things about this app and would recommend everyone trying it out for a few weeks. The app does a great job in helping you discover new podcast and ones that are very much related to the ones you already love. The app does an amazing job in helping you find new podcast however, there is one problem that is very annoying. It seems very slow in bringing in new episodes. I use a lot of different podcast apps. Player FM is almost always behind in bringing in new episodes. For many people this may not be a big deal but I like getting the new episodes as soon as they drop, this is especially true all of all the news podcasts I subscribe to. I wasn’t able to find anything that indicates how frequently the app refreshes to find the latest episodes. Also It seems on Apple devices that I am not receiving notifications that new episodes are available. I think Player FM has some very good features and everyone should give it a try. However, getting the new episodes as soon as possible and a good notification system seems to be lacking from the app currently. Hopefully, some of these issues will be improved soon and then I could enthusiastically offer a 5 star rating.
By tsrk30

Works the way I need it to work

The only podcast app (other than Apple’s) I’ve found that lets me listen oldest to newest and has sensible download behavior when doing so.
By stevet-11

The sponsored podcasts (aka ads) ruined the experience

I happily used and loved PlayerFM for probably around 4 years and had a paid account almost from day 1. But they started putting “sponsored podcasts” (podcasts shown to users after payment to PlayerFM, which realistically are advertisements) in various parts of the app, including search results. It became too annoying seeing an ad as the first result in EVERY search I did. So I looked around and, much to my surprise, found a podcast app I like more. After 4 years I thought I’d be using PlayerFM until I or the company died, whichever comes first, but the frequent ads where what killed the experience for me. If you don’t mind the ads even with a paid account, it’s a great app and service.
By ifitsfreeitsforme

Not resume after app closed!

Still- playing from the beginning of my 90min track! I left playing at around 45min, app was always minimized app. Later I used it via Bluetooth in my car and it’s playing vin car only, with this glitchy starts from the beginning. For Apple Watch app I should buy premium?! Lol what? Price of this app is 9.99 per year! Will never pay more. Create a paid app! Shows 35min of position for some track, when tap play - start play from the beginning. Also, playing in bg, then app crashes/closes. Opening it back - showing position where last stayed during playback, but when I tap play - it starts to play from the beginning. Also2, sometimes it’s not allowing me to do scrubbing, tap +30 buttons just playing the same part every time from one fixed timestamp position. Still bug is here. Also3: i had 2 downloaded podcasts, then I downloaded one more but manually. When I tap download and go back to what I have downloaded- i saw there only 1 downloaded file. It’s removed another! Bug. Also4, after some episode(a-style this is freestyle ep193) was downloaded by me manually, later auto download canceled it, started downloading it again. Also 5: i have 95% of episode downloaded, then lose wi-fi, no cellular plan. Then reconnect to wi-fi and started downloading from 0%! No resume downloading?! You as developers should understand that more code you write more bugs. Just hire another programmers and rewrite all from scratch. Currently it’s bad. Also6: now always error Sync error, our servers couldn’t authenticate you. Please login again. But I logged in and it’s repeat can play music now at all. Removed this app. Lol with such a lot a billions bug you already want to pay 30-40$ per year! Thats pity. Now I’m on Overcast player. It’s $9.99 PER YEAR! With new UI update more new glitches: ... vertical dot menu is not working for downloads. Unable to scrub track after it plays and then pause after some time: it’s repetitive and forced plays from the same position each time I scrub to a different position, so whatever Im trying to scrub. Also nonsense message: upgrade to Space Saver will save 54Mb of space! Lol what?! I have 30Gb free on my phone, I reeeealy don’t care. I just re downloaded this app and all issues bellow is NOT fixed. Playback is glitchy, scrubbing glitchy and so on..
By Olоlо

One of the oldest and the best

Ive been listening to podcasts since 2005 ive used every major podcatcher and always ALWAYS come back to big swingin daddy player fm i just like the drama and yeah every so often they have a bad release or i get some weirdness. but tbh all of these podcatches do. honestly. its easy to read the show notes. the links work from inside of them. 3rd party rss. cross platform sync. pinned lists. favorites. notes and bookmarks. its a podcatcher too. no frills. no useless recommended shows getting in the way of your subs. the show artwork is also perfectly placed. its the little things. and the big things. i love this app on ios. android. and the reason im writing is because i know itll kill on the iwatch.
By kumaku

I moved from Android to Apple and thought the functionality would be the same, as this was my favorite podcast app. But when I pause and resume play from wired or Bluetooth headphones, the episode restarts. Please fix this, I hate Apple Podcasts app.
By UHmazingROB

Trying to navigate either from steering wheel controls or on the Lock Screen restarts the podcast episode. Also had the episode restart issues a couple times when getting back into the car and plugging in instead of it continuing off.
By Eric Kolibas