The Alert App pairs up with Embrace smartband and sends your chosen caregivers an automated SMS and phone call when Embrace detects unusual patterns that may be associated to a convulsive seizure. The Alert App requires a dedicated smartphone with Bluetooth connectivity, and is available with a subscription plan. It is only designed to work with the Embrace smartband by Empatica www.empatica.com/store/ (http://www.empatica.com/store/). ++++ ALERT FEATURES ++++ The Alert App: - Sends automatic calls and SMS to your caregiver when a possible convulsive seizure is detected. - Sends your GPS location to your caregivers (when this option is activated). With the Alert App you can: - Review and track your seizure frequency. - Enable caregivers throughout different periods of the day (e.g. enable teachers only for school hours). - Disable Embrace's lights and vibration when you don't need them. - See Embrace's status, battery, and memory levels. - Receive notifications as soon as updates and new features are available. - Cancel any alerts associated with events that do not require assistance. ++++ EMBRACE IN THE PRESS ++++ “Makes it easier for people with epilepsy to detect seizures and let others know when they need help.” - MIT Technology Review “It can also do something most watches don’t: send out an epilepsy alert.” - Time ++++ REGULATORY ++++ EU: the Embrace smartband is a medical device of class IIa according to the directive 93/42/EEC, for patients with epilepsy or at risk of having epilepsy. USA: Embrace is the first wrist-worn wearable cleared by the FDA in neurology. The Embrace is a prescription only device that is indicated for use as an adjunct to seizure monitoring of adults in home or healthcare facilities during periods of rest. Always refer to the product Manual for detailed instructions, warnings, precautions and possible risks related to the Embrace. ++++ CONNECT WITH US ++++ Web - http://www.empatica.com Facebook - http://www.facebook.com/empatica Twitter - @Empatica Instagram - @empatica_wearables Support - support@empatica.com or (866) 739-2049 (tel:8667392049) (Monday - Friday from 9:00am to 1:00pm EST). 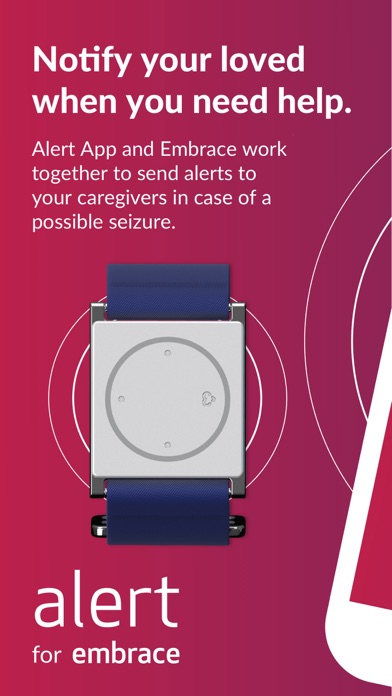 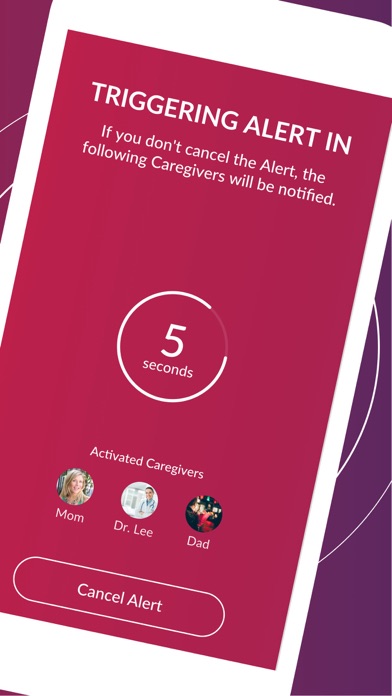 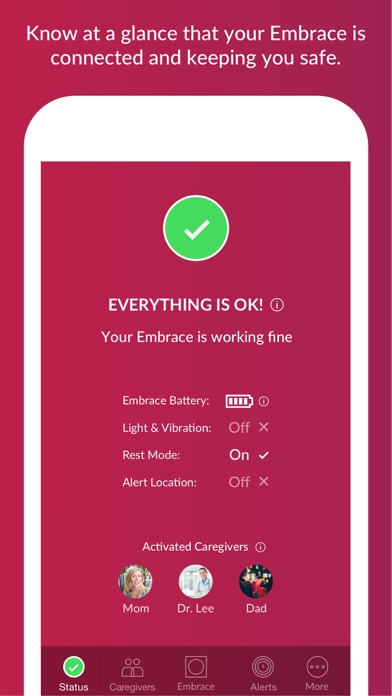 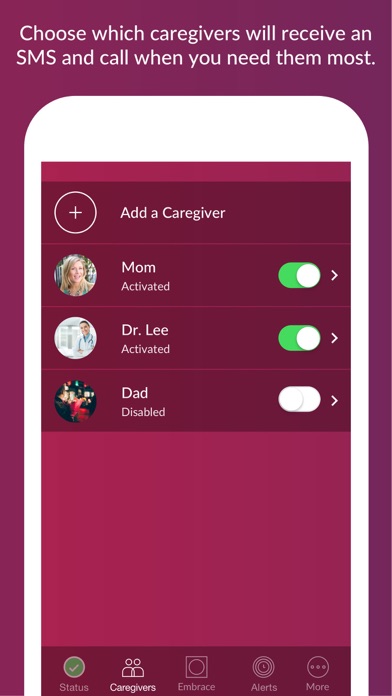 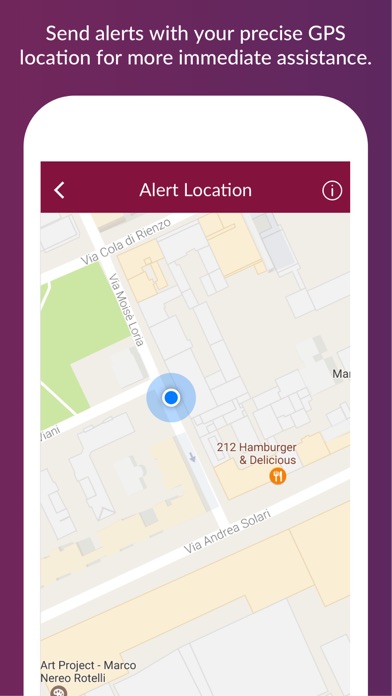 This company does not care about you. They take your money and leave you stranded
By lauren guillebeau

It’s really a hassle. I am Constantly losing connection. I can have my phone in the hand I am wearing the monitor in and it disconnects stating to have the phone closer. Hmmm how much closer can it get? Prior to that, for months I was getting disconnected from WiFi. Now I seem to be getting logged out. Can’t try to contact anyone they want to play dumb and just argue. Very poor customer service.
By 123456karen

You guys are looking at liability issues when the software continually has connectivity issues. I will be pursuing a refund. We have a son with significant seizures and we bought for peace of mind. This will be my third attempt contacting you all due to problems.
By flandersmama

disconnects a lot even at less than 10ft

update 2 - upping to 3 stars, developer is offering to help, just too busy to call them, but i like that they care - found that with one phone it has BT issues (looking like it’s not the embrace’s fault) but second phone connectivity issues are actually the app or ios where i have to restart the app or even reboot the OS then it connects fine for the night so can’t hold that against embrace if its the OS, hoping the app is carefully checked to be sure its not the issue and apple is pushed to fix OS if its responsible for inability to connect. Note embrace was able to detect a seizure last night, only wish a) it spead up notification especially at night when patient won’t be confirming if it is not a seizure. b) stop calling once its picked up as its a stressful time and having the phone called a second time after picking up and pushing it out of the way while rendering assistance does not result in a second call. I understand if its not picked up, but even a disconnected call shows the caller id so we know what the call is about. update 1: I have to drop another star as the Bluetooth connectivity is horrible, have tried two iPhone 5s and they both have issues even at a few (<7) feet of distance. Maybe we just have a bad unit, sorry but it’s too unreliable to get even the original two stars :( Original review follows: really want to love this app+wrist monitor but frankly am quite disappointed. But have not yet given up as they are easy to fix in sw so am holding out hope. There is no reasonable (without trying super hard to fool it into thinking there is a seizure, which i can’t seem to do on purpose) way to have the watch issue a test alert, this i can excuse if the patient’s app could issue test alerts, to be sure the notification receiver (caregiver) does not have the alerts blocked i.e. with night mode, this is a crucial safety check that we should be able to do at will. the subscription for the lite level ~$10/m is high for only allowing one care giver to be notified, this is too synonymous to big pharma and totally misses the reality that parents of patients are forced to travel and if that is the assigned caregiver it leaves the patient with no coverage or that some times a parent forgets fo charge a phone and that creates a single point of failure - I struggle to overlook this as this is a simple case of revenue over minimum level of patient care. i am fine with no gps for the lite level though it seems stingy too. I hope these are just simple oversights that will be immediately addresses as the company came across as caring for patients when i researched it before buying. One more recommendation is a care taker app that the notifications activates that does not leave notifications at the mercy of the iphone notification system which is often not enough to wake a sleeping caregiver.
By E1D1

This app is a total nightmare. I have tried for 3 days to set up my account and can’t get past the “update”. I’ve emailed support multiple times with the suggestion to turn my phone off and back on.... seriously? I’ve paid for a subscription that I can’t use and worst, my son still isn’t protected at night when having seizures.
By jacikik

We bought this watch for our 10 year old who was recently diagnosed with epilepsy and we’ve had nothing but trouble with it. It is constantly disconnecting from her phone, sends more false alarms than anything(as a mother of a child with epilepsy the last thing you want is getting an alert that your child is seizing only to find out it’s a false alarm.) Goes off for things a simple as a bumpy car ride. Can’t find a phone number to contact the company to get support and now the darn thing won’t even connect to her phone. She had a seizure last night and we weren’t able to utilize the almost $400 watch that was supposed to be our peace of mind.
By mommasmith6!

$250 wasted because the app crashes when logging in. Guess my child will suffer. Thanks a ton you money grabbing company
By Justfixthestupidapp

The works great with all my seizures an attacks but I notice it disconnects from the iPhone app whenever I use the internet on my iPhone or do something with my phone that uses the internet more often so I have to stop whatever I’m doing on my iPhone an go back to the app to get it reconnected again.
By panda04

Don’t bother with Empatica unless you have constant seizures

I was diagnosed with minor epilepsy, I’ve only had one tonic-clonic seizure, but my doctor recommended I get the Empatica watch to detect seizures since I am alone on a college campus. This thing has sent me at least 10 alerts in the time I’ve had it. All false. It’s super hot outside and I’m sweating? Alert! I’m shaking a bag of chips into a bowl? Alert! I’m petting my cat? Alert! It sounded so complicated but I didn’t realize it was just a vibration monitor. I’m not confident it would actually detect a real seizure if I had one. I’d recommend this to someone who has constant uncontrollable seizures and who is alone most of the time, but otherwise if you have a less minor form of epilepsy, it may just become an annoyance
By Hushpup123

I didn’t even get passed the make my account part before I deleted it!!! If I could give less the one star I would
By ftigifuhxotiidhxjpdpj