Recruit Justice League Legends like Batman, Superman, The Flash, Wonder Woman, The Joker, Harley Quinn and many more in the ultimate DC superhero fighting game! As the shadow of the Blackest Night prophecy falls on every world, sheer willpower alone cannot save the shattered DC Universe. It’s up to you to lead a team of DC’s greatest champions to victory, but know this: the Universe cannot be restored without a strategic mind. Download now to experience the ultimate strategy RPG, packed with all of your favorite Justice League superheroes and villains. Join Batman, Superman, The Flash, Wonder Woman, The Joker and many more in a battle against Nekron and the Manhunters. Collect and level up your unlikely team of Super Heroes & Super Villains to save the world in epic 4v4 combat! COLLECT 130+ DC CHARACTERS - EPIC CCG! • Collect and form teams of Superheroes and Super Villains from across the DC Universe • Superman and Lex Luthor? Batman and The Joker? Bring together unlikely allies to build your roster and battle against rival teams! • Construct your own allegiance of the Justice League or build your own Suicide Squad • Collect new DC characters every month and earn a Legendary hero for free! FIGHT IN THE ULTIMATE DC RPG • Immerse yourself in an exciting story mode across iconic DC locales, including Metropolis, Atlantis, Themyscira, STAR Labs, and more • Unleash Superman’s Heat Vision, Bizarro’s Flame Breath, or Flash’s Speed Force Vortex on wave after wave of undead foes! • Survive multiple battles by utilizing your whole roster to gain exclusive rewards and characters in R.E.D. Alert Mode • Compete against other players around the world to demonstrate your superior team-building skills, and climb the ranks in 14 unique Leagues! LEVEL UP TO LEGENDARY STATUS • Strategically rank up your Superhero or Super Villain to Legendary, for improved stats, new Super Powers and a new legendary appearance • Upgrade iconic gear for your hero, like Batman’s Batarang, Sinestro’s Power Battery, or Lex Luthor’s Kryptonite Ring! • Experience Rebirth - unlock new looks and additional skins! TEAM UP IN PVP EVENTS WITH FRIENDS • Join forces with friends - work together to complete Alliance missions and fight together to take down Alliance raid bosses! • Weekly PVP events - Arena, Blitz, Showdown and Siege tournaments • Show off your winning strategy - Poison Ivy buff steals or Green Lantern energy shields? You decide! • Earn exclusive rewards for participating in special events and challenges Dominate the DC Universe! Download this unique superhero fighting game TODAY! Find us in the Social Universe! Facebook: https://www.facebook.com/DCLegends/ Twitter: https://twitter.com/DCLegends Game Support: https://dcgamessupport.wbgames.com/hc/en-us Ad Choices: policies.warnerbros.com/privacy/en-us/#adchoices Terms of Use: policies.warnerbros.com/terms/en-us Privacy: privacycenter.wb.com/do-not-sell 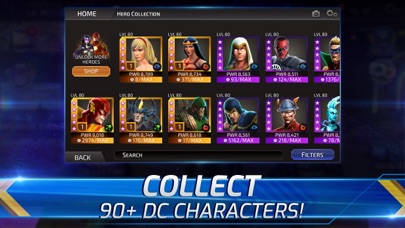 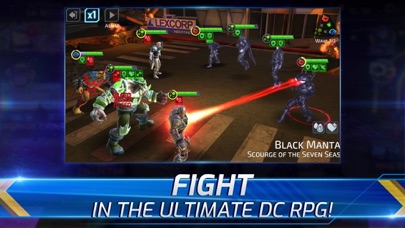 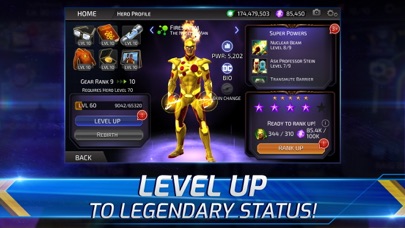 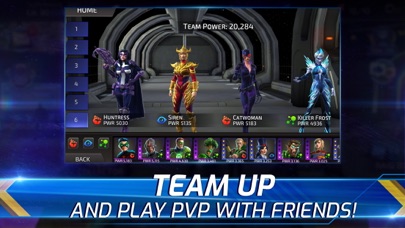 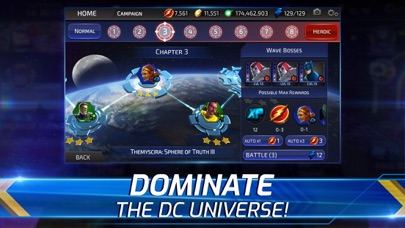 Every time I log into this game I can never click on anything to play. When I am able to it is still down loading. I am connect to a secure connection I do the updates when ask and still same issue. I have been for a few days trying to do the dove mission cause I really want to add her but it don’t seem like that will happen yet again..it is the hero campaign that also keeps downloading only
By SexyAaron

this game has no story just collecting characters and full of same routine app purchases are very high cost poor power balances, maybe developers have no knowledge about DC comics’ characters. and also this game has very slow loadings hope this game stop supporting or completely renewed
By Toshichocoamu

GAME IS UNPLAYABLE ON IOS Version 12.5.2

I have years tied up in this game and every time I go to the store, the game crashes, every time I start a PVP battle the game crashes...I will make this short, every time I open this game, it crashes. I thought getting a new IPad would resolve this, but my old Game Center login has been deleted by Apple and now I can’t transfer my progress to new IPad. I really wish this developer would get to the 21st century and offer an email login like all my other games have. This is literally the only game I could not transfer my progress and unfortunately, this is the game I have been playing the longest and have the most progress on. Other than that, I think the game is great because it has a lot of characters and they continually add new characters. It is also easy to upgrade these characters. I would tell the developers nice job on the game, but PLEASE REMOVE THE GAME CENTER LOG IN, or make the game playable on the version and IPad generation I am playing it on.
By R323

Love the game, hate the amount of memory it consumes. Frequent downloads crash the game on an iPhone 8 with 64 GB. Takes forever to download the data to play a scenarios. CAN NOT run on Android tablet with 16 GB of memory after two weeks of play as it keeps needing more and more memory to add new scenarios.
By chrisb1953

I feel like a game this old should be more polished

It’s generally fun, but when you start getting into the PVP arena and some other areas, there is some really bad stuff going on. Your opponents are grey, so good luck trying to figure out who to attack first, especially if your going up against multiple green lanterns. This removes the players ability to formulate a good strategy. I’m sure there is a reason for this but there should definitely be a preference to fight opponents in color instead of grey blobs. Also if you win 10 matches In the arena you get a bonus, cool right? Well not if there is an opponent you can’t beat, which will happen. There is a button to refresh opponents so you would think you would get 10 new opponents, but you don’t. I have refreshed 4 times and the same guy I couldn’t beat is on every list. I.
By !el Bandito!

Great characters and gameplay too!
By ABerrios5@

Alright, review of what could be better first. I played strike force lonnggggg before I found this game, and their astonishingly similar in the way their played however very very different at the same time. I’d give this game a 5 stars but when compared to its opponent it lacks creativity in the superheroes, darkseid should be able to resurrect fallen characters as parademons with less health but more damage, or something that makes him unique as he is a new god, he should be overpowered when maxed out because that’s what he is in the comics but he’s not in the game. There needs to be synchronization of the characters where there’s buffs with specific allies, there needs to be better ways of farming resources, there needs to be a lot more things added before the game gets 5 stars because at times the characters and abilities are lame. However the game is very very fun, there are a lot of different ways to assemble your team to fight in many different battles and earn character shards. I enjoy it thoroughly and one thing that legends does better than strike force is refrained from shoving micro transactions down our throughts although at the same time they make it nearly impossible to buy anything in the store as they have barely any way of farming resources. All in all I enjoy the game, it’s fun, it’s cool and I can get away from the micro transactions of strike force and play with my preferred dc characters because we all know the justice league, let alone Superman would wipe out the avengers. Good game, hope they see this and take what I’ve said into consideration.
By Braydon Dunbar