Easily track, organize and manage the food in your home. With lists for your freezer, fridge and pantry, you can easily check what food you have left, see what food you need to use first, create a shopping list, plan your meals, avoid unnecessary purchases, reduce food waste and save a bunch of money.   Features: • Inventory lists for your freezer, fridge & pantry ​ • Scan barcodes to add food in seconds. • Synchronize your lists across devices • Great list design to help you get an overview of your food • Sort your food by expiration date, name or category • Filter your food according to category or placement ​• Move items items between lists • Search and find out if you have that particular grocery in stock • Add food from a library of +200 food items ​ • Easy edit of your food • Assign food icons to your food NoWaste Pro features • Pro scanner with access to 335 million products • Create unlimited inventory lists ( you have 6 lists in total in the free version) • Expand your storage space from 500 items to 5000 items If you have support related questions or are in need of assistance with the app, you are welcome to contact us at nowasteapp@gmail.com. You can read more about NoWaste and find NoWaste on social medias at www.nowasteapp.com Regarding NoWaste Pro Annual subscription: If you choose to purchase NoWaste Pro Annual, payment will be applied to your iTunes account on confirmation. The current price for NoWaste Pro Annual is 5,99 US$ and may vary from country to country. Subscriptions will automatically renew unless canceled within 24-hours before the end of the current period. You can cancel anytime with your iTunes account settings. Any unused portion of a free trial will be forfeited if you purchase a subscription. For more information, see our 'Terms and Conditions' and Privacy Policy. You can manage and cancel your subscriptions by going to your account settings in the App Store after purchase. NoWaste's Terms & Conditions for use: https://www.nowasteapp.com/termsofuse 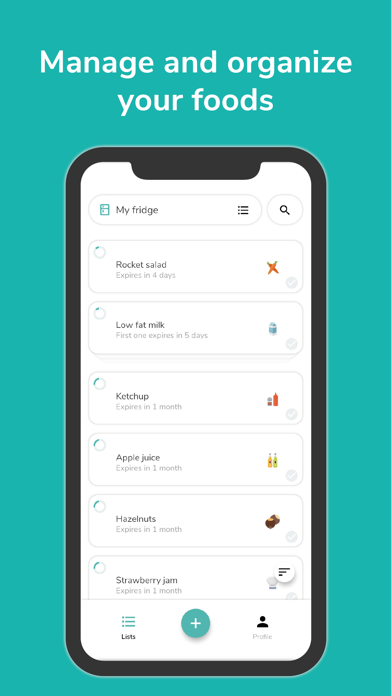 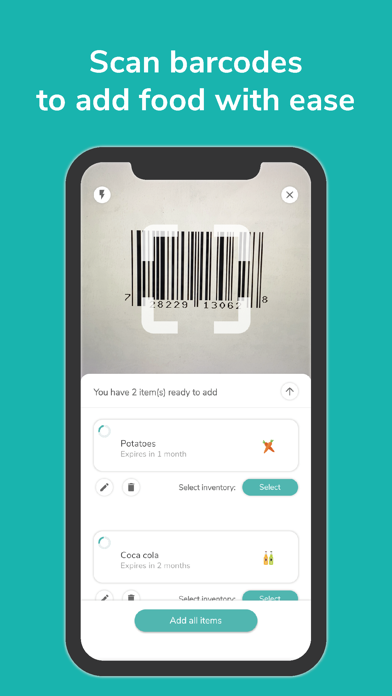 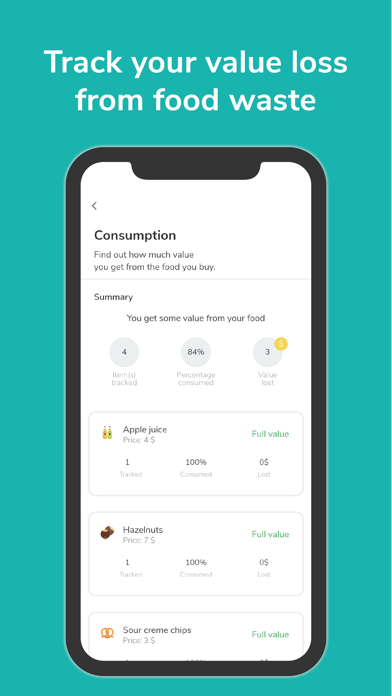 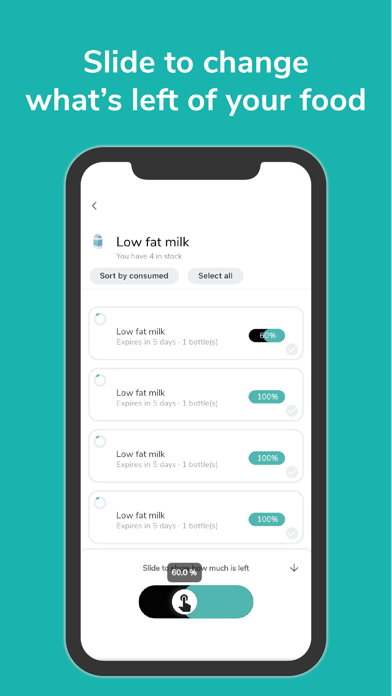 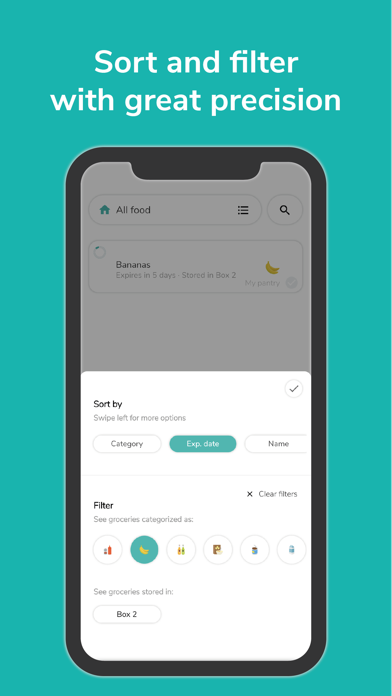 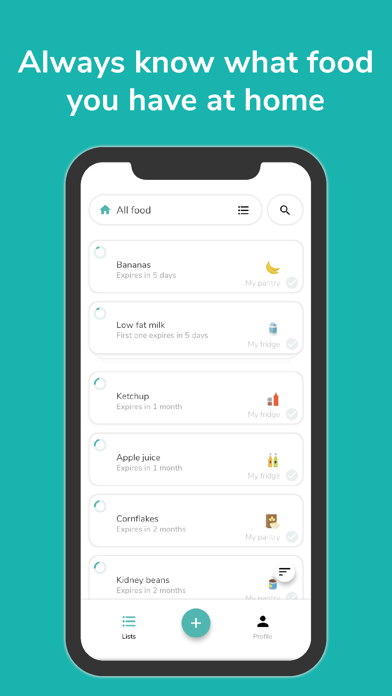 Where is my inventory

I keep on getting a solid white screen when I click on an item in my inventory. I’ve now scanned my spices 3 times and I still have NOTHING in my inventory. I want my $5.99 back. This is absolutely useless. I’m wasting time rescanning the same thing over and over. Supposed to save me time and money. DONT WASTE YOUR TIME AND MONEY!!
By wasteofmoney20

Does not pair to help you use products in pantry in recipes. Takes a very long time to input each pantry product, and at the end it's like what was the point?
By NikkNakk224

Lost everything, including all my time

One week ago this would have been a 5 star rating, loved the organization and all the entry methods. We spent a great deal of time inventorying our freezers. A notice was out to upload everything to cloud before the update, and we did. The program updated and we are no longer recognized. Trying to enter your email and claiming you want to reset password results in the little spinny going around for hours and no reset link sent in the mail. I honestly don't think I have the patience to start from scratch knowing this developers lack of update skills may cause me to lose everything once again.
By Big Ships

Lost all my saved items after the new update 😡

I’ve been scanning my incoming food now for awhile and had a good handle on things... until today. Today I opened the app and it acted as if I had never used it before. Then it demanded a email address and password that it never required either. And now months of data entry and recipes are GONE! Add to that the developer making excuses that not all subscription perks I’ve already paid for are not available because no legitimate excuse. Where the hell is my DATA???!!! Vendor instructions to get refund on 12 month subscription after only 4 months doesn’t work. Reported to Apple. Avoid this app like the plague.
By JustAwful68

Glitchy, and lost all my food

It takes many many hours of upfront and ongoing investment to set up and use this app. It would be worth it, but it has proven so glitchy as to barely be usable at the best of times. (My husband finally swore it off a few months ago and said I’d have to do all the input and deleting myself, because it was so glitchy.) But the real issue is that the developer decided to move the database to a new server this month, and in the process MANY users’ food was lost, including mine. This is apparently the users’ fault for not responding to some notification that the developer purportedly gave that they’d have to export and then import their food. I still have no idea how this “notification” supposedly happened (I have no emails, noticed no pop ups, saw nothing in the app), so it was either a 1-time unclear notification, or it was hidden well. Regardless, my food is now lost and many hours of my life wasted, and my $6 for the app wasted. Seriously, just use a google spreadsheet to track your food.... cause this app is not worth the pain. The barcode scanning feature seldom works for our food, anyway. Edit: apparently the “notification” to export your food was in the NOTES TO THE UPDATE DESCRIPTION IN THE APPLE STORE. As if anyone EVER reads those; all our apps auto update. What a joke.
By usedtoactuallylikethis

Put my information in twice and lost it twice. First time it let me set up an account with no email just a user name. Then it wouldn't let me log in without an email. Then after a set up a new account with an email when I tried to update the expirations on my list- my lists kept vanishing or not updating. Skip this app- it's garbage.
By dicebuster

Paid for the upgrade, once the developer went to a subscription it basically stopped working (because we are grandfathered and they resent it apparently). Recent upgrade locked out our account and so now I have to find a new app and rebuild my inventory of my garage freezer, house fridge and pantry (all of which are full to bursting due to lock-down the the past ten months) completely from scratch and years of careful effort is lost. No way to run a software business. You’ve forgotten your job is to make my life easier, not write code.
By JimJohnMarks

I loved this app and used it daily. Then I woke up this morning to find a new version which requires setting up a new account. My old (large) inventory of my fridge, pantry, two freezers, and spice cabinet are gone and unrecoverable. There is a way to import an inventory, but it requires having previously exported it in preparation for this update. There was no announcement within the app, by email, etc., to let users know about this. Instead, it was buried in the update notes (which, if you—like me—have apps set to auto-update—will never see). It would take me hours to recreate the inventory (and, ironically, some food waste will be involved, as I have some things I only have an inkling of the expiration on in my now-vanished inventory). It is now understandably difficult to trust that spending those hours in this app is a wise idea.
By _CLL_

Was Good, Not Anymore

Just got the new improved version. The in-app purchase I paid for pro version is now nullified. It turned into an annual subscription. No longer worth it.
By MrWebble