DRAGON QUEST III: The Seeds of Salvation—one of the most highly acclaimed and best-selling games in the franchise is finally here for mobile! Now all three instalments of the Erdrick Trilogy can be played in the palm of your hand! Every wondrous weapon, spectacular spell and awesome adversary in this rich fantasy world is yours to discover in a single standalone package. Download it once, and there’s nothing else to buy, and nothing else to download! DRAGON QUEST III: The Seeds of Salvation has an independent storyline and can be enjoyed without playing DRAGON QUEST I or DRAGON QUEST II. ※In-game text is available in English only. ◆ Prologue On the morning of their sixteenth birthday, the child of Ortega, hero of the land of Aliahan, is charged with a seemingly impossible task by the King himself: to slay the Archfiend Baramos, master of darkness! What trials await our intrepid hero as they set out to take on a quest not even their legendary father was strong enough to complete? ◆Game Features ・Freely Customisable Party System. Set out on an unforgettable adventure with a party of up to four characters who can be customised to your exact specifications at Patty’s Party Planning Place! Choose names, genders and jobs, and put together the team of your dreams! ・Freely Changeable Vocations Your party members can be assigned any one of up to 9 vocations, a choice which will dictate their stats, equipment, spells and abilities. Though the hero’s role has been decided by fate, the jobs of all the other characters are yours to change as you see fit. Characters who change jobs will be returned to Level 1 and have their attributes halved, but they will retain all the spells and abilities they’ve learned, allowing you to tailor your team to perfectly suit your needs. Turn a priest into a warrior to add healing abilities to your swordsman’s arsenal, or mix it up any other way you like! The possibilities are endless! ・Experience an epic RPG experience with over 30 hours of gameplay with added features to the original release! Travel across multiple continents and dungeons as you level up your characters and unlock new spells and abilities. The personality system changes how your character grows making your party always unique. Mini-games like medal collecting to unlock powerful new items that were not available in the original release. Discover and explore bonus dungeons and location after completing the main plot. ・Simple, Intuitive Controls The game’s controls are designed to work perfectly with the vertical layout of any modern mobile device, and the position of the movement button can be changed to facilitate both one- and two-handed play. ・Experience the multi-million selling series, beloved both in Japan and beyond, and see how the masterful talents of series creator Yuji Horii first combined with the revolutionary synthesizer sounds of Koichi Sugiyama and the wildly popular manga illustrations of Akira Toriyama (Dragon Ball) to create a gaming sensation. ◆ Supported iOS Devices/Operating Systems ◆ ・iPhone 4 and above/iPad/iPod touch (4th generation and above) ・iOS4.3 and above 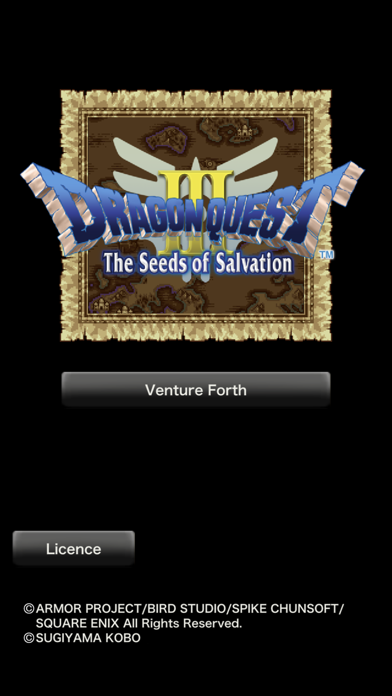 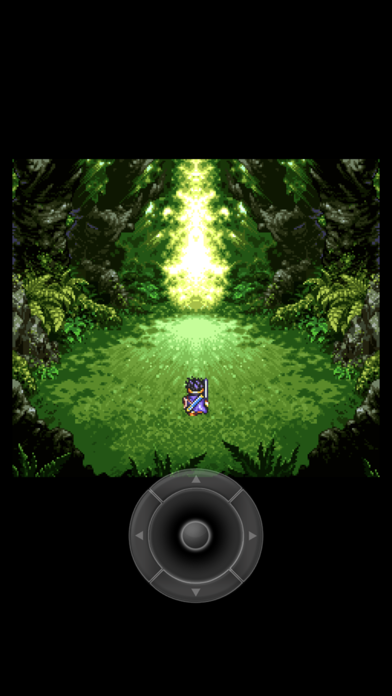 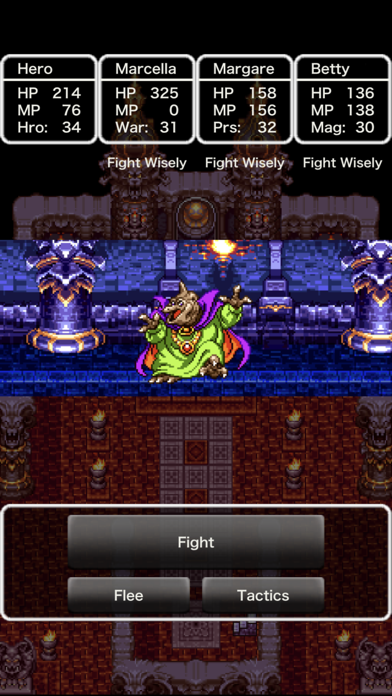 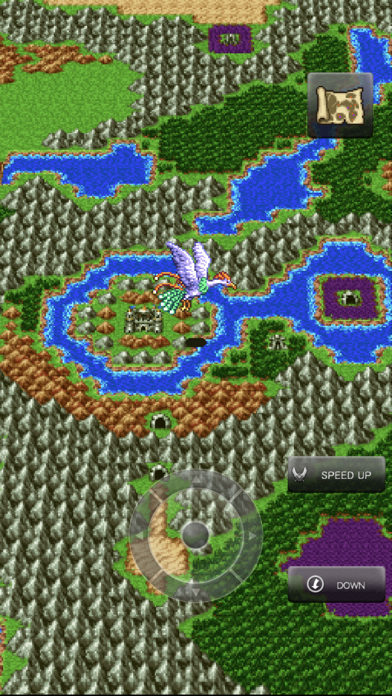 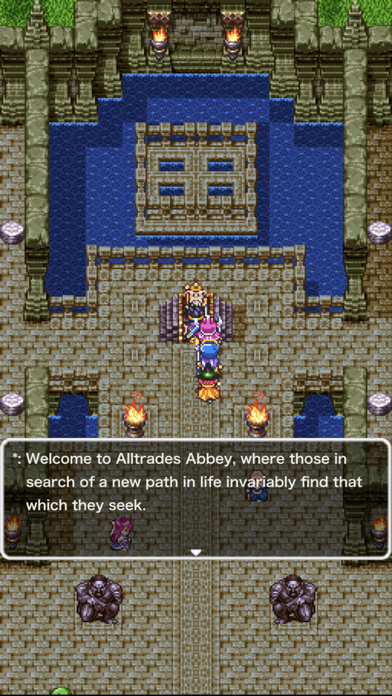 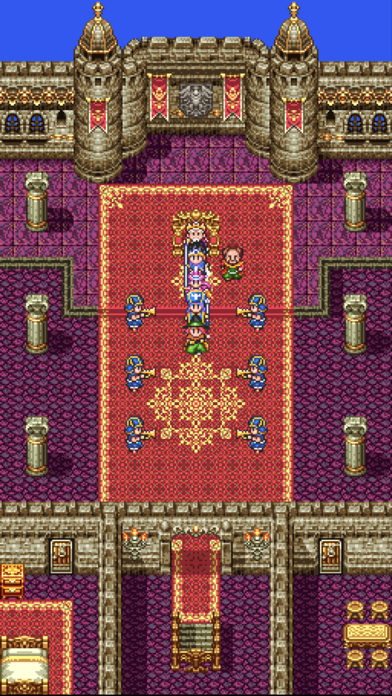 Love the game but...

Love this game, the controls are decent but my game isn’t saving. I don’t know why. I save at the castle but when I come back to load the game it’s blank. I would really like this to be fixed.
By 007& a half

The grinding needed to get through this game makes it unplayable. Over 20 hours of just grinding and I’m still getting smashed by one particular encounter. Don’t waste your time or money on this piece of crap
By woundedtiger

The only I had was that I could not save my game onto Game Center and transfer the data to another phone when I upgrade my phones. RIP to all that grind.
By Theatomplayer

The roots of the iconic series you can take with you

I’ve never played this on an NES, but having played the OG Dragon Quest here on iOS, it was every bit worth the grab on sale. So you’re this knight of all trades, wants to be a hero after your father, set to battle yet another demon overlord—or rather, the first one ever. Play as a girl for some extra laughs no matter what you yourself identity as. You won’t regret it. If you’re a fan of Dragon Quest, it’s the same lotta grind for little money that will keep you battling for hours or just frustrate you to death. But it’s worth it for the variety of jobs your allies can take on. My only issue thus far is that the graphics look incredibly blocky on high-res displays. To that end, DQIII could use a touch-up from one of its earlier ports. But as I’ve said, it’s worth the pickup.
By swordzman0611

Deleted my save data

I just made it to the area where you need to use the wrecking ball and found my data was deleted. Please Square Enix fix this before it deletes a file where I am much later into the game
By jjfake98

Squaresoft was my favorite companies back in my SNES days. Opened the game tonight and the game loaded me about two hours behind in my play. With $10 game like this from a great company I would have expected better,no excellence. This type of game also doesn't motivate you to grind all those levels over again. Cmon Square! You used to be my go-to, my homey. Crono Trigger changed my life. A masterpiece. This was my first Dragon Quest too! Maybe you guys are active on here and you can help a brother out. Promise to buy another Square title of you do.
By steph_mit

This game is so great!! It’s easily the most hours I’ve ever put into a mobile game. It’s so immersive and engaging, and almost feels like a modern game even though it’s from the 80’s or 90’s. I can totally understand why it’s considered a classic, as I couldn’t put it down from the first 10 minutes. Love this game!! As an added bonus, if you play 1, 2 and 3 consecutively like I did (over the course of the last two weeks...), this game becomes so much better!! 10/10, highly recommended experience. Treat yourself.
By Hxzhajkakaksjxc

The Game that Built the Franchise

Dragon Quest III (Dragon Warrior III in the U.S. back then) was the 12th highest selling game on the NES/Famicon and propelled Dragon Quest from a successful series into a cultural phenomenon (at least in Japan), as no numbered Dragon Quest game has since been released on weekdays, since the absenteeism from this game’s release day crippled Japanese school and work. Dragon Quest III was so great because of its meaningful and detailed story that ties together with the first two games and because of its highly customizable character-progression system. This mobile version includes most of the improvements made to the various mostly-Japan-only rereleases so is a huge step up from pulling out a NES and old-schooling it. For more information, check out the 1-hour analysis of the game, “The History of RPGs Ep. 7 | Dragon Quest III” on the Mr. Gentleman YouTube channel.
By Keithustus

Let me just say, this game works SO well on iPhone. Unlike the other square Enix iOS games, they actually innovate and update their dragon quest line and that keeps these games working so well. The updated graphics, orchestral soundtrack, controls all work so well on this platform and whoever’s idea it was to have the game stretch downwards in full screen is a genius. This game or any of the iOS dragon quests for that matter are well worth your money
By J.S.O