The Tollsmart Toll Calculator app was the first app to calculate toll costs for any routes across the US and remains the most comprehensive and accurate FREE toll calculator app on the market with expanded coverage that now includes all tolls in Canada, Mexico, France, Italy and Spain. Tollsmart is FREE to use for calculating toll costs for a single route anywhere in the US, Canada, Mexico, France, Italy and Spain for 2-axle passenger vehicles. Tollsmart now also powers some of the most exciting and innovative transportation and mobility service apps through the Tollsmart API services. Learn more and sign up for a free trial at https://developers.tollsmart.com. FEATURES INCLUDE: -Compute routes with origin/destination/via-points chosen from map search, contacts and arbitrary points on a map (saved in search history) -Select transponder accounts to include associated discounts -Set departure time for accurate results -Know the price of tolls at the time when you'd drive through them (variable prices are integrated with calculations) -Calculate (and navigate) with Google or Open Street Maps. -Set vehicle parameters, year, make and model (see details below for in-app purchase/subscription) - Display alternative routes that save money (unlock for $2.99 in-app purchase or share on Facebook) - See where your transponder is (and isn't) accepted - See where you'll encounter cashless tolls - Track tolls while driving for easy export into expense reports via Toll Tracker™ service ($2.99 annual subscription). -USA Express Lanes displayed when an option based on time of day and direction of travel. *Express Lane pricing is given as likely minimum and maximum range for a trip. Real times prices are displayed for a select express lanes. PLEASE NOTE REGARDING PRICING: There is $2.99 monthly subscription fee for adding multiple vehicles or additional vehicle sizes including trailers, RVs, commercial vehicles and trucks up to 9-axles in size under the following terms: - Payment will be charged to iTunes Account at confirmation of purchase - Subscription automatically renews unless auto-renew is turned off at least 24-hours before the end of the current period - Account will be charged for renewal within 24-hours prior to the end of the current period at the same monthly rate of $2.99 - Subscriptions may be managed by the user and auto-renewal may be turned off by going to the user's Account Settings after purchase - No cancellation of the current subscription is allowed during active subscription period - Any unused portion of a free trial period, if offered, will be forfeited when the user purchases a subscription to that publication." View the Tollsmart Privacy Policy at https://www.tollsmart.com/privacy-policy/ View the Tollsmart Subscription Terms at https://www.tollsmart.com/mobile-apps-subscriptions-tos ADDITIONAL INFORMATION This version of Tollsmart supports toll fees for ticketed and non-ticketed toll roads, as well as toll bridges and tunnels. TRANSPONDER ACCOUNTS If you are traveling with a transponder you can select it from the comprehensive list of transponders in the Options menu and Tollsmart will apply the appropriate discounts, as well as highlight which toll facilities along your route accept your transponder (green push pin) and which will not (purple push pin). Please note for E-ZPass accounts it’s important to select the state in which your transponder account was acquired (i.e. NY E-ZPass) as discounts may not apply across other states. DISCOUNT PLANS Specials discount plans, such as those for commuters, seniors, veterans or Green drivers are not supported in this version. For certain tolls, one may open a Pay-By-Mail account for repeated use at discount prices, as opposed to paying a one-time fee. This version of Tollsmart provides only one-time entry prices, it does not support Pay-By-Plate and Pay-By-Mail accounts. Some toll facilities charge additional service fees (such as for video tolling). 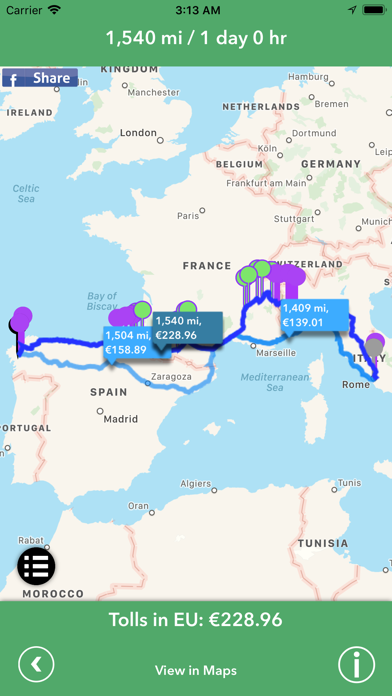 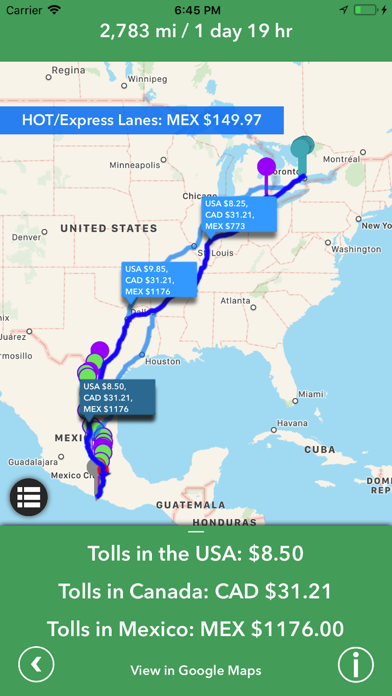 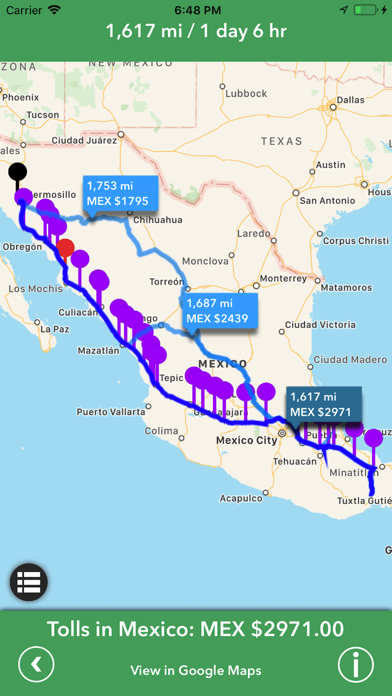 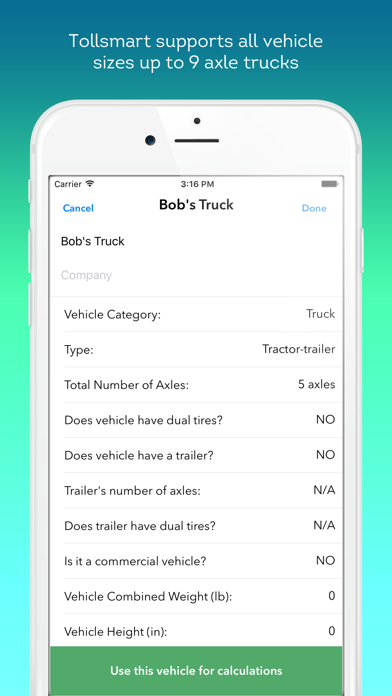 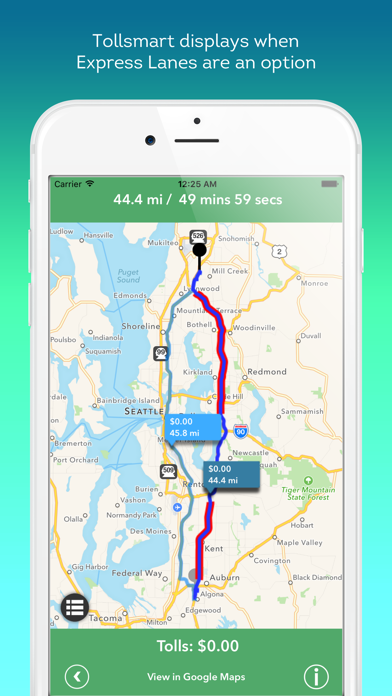 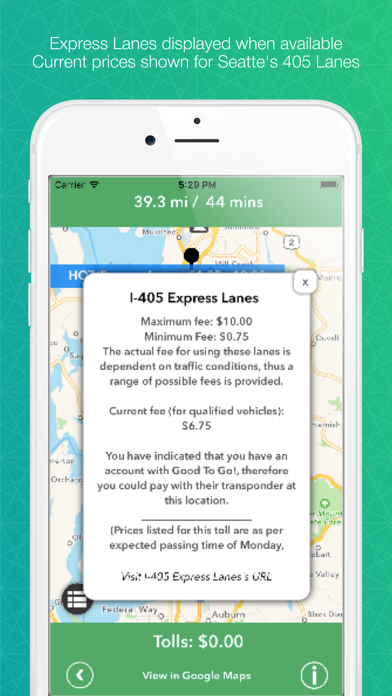 The worst app I have ever used

Not usable at all. When you locate yourself you have to spell every word in your address carefully, they don’t give you auto prompt to fill up address. This is so lame. Don’t use this product it will give you a major headache. The worst thing is that it doesn’t calculate the fastest routes. A total waste of time.
By 哥鸟

Too much hassle to use. Not always calculating the fastest routes. Not very useful with out a subscription
By BitterJake

When I first download the app I thought it will be good but once I purchase 3 of their different subscriptions types which I think is kind of like a rip off.. The app seems to be pretty confusing he doesn’t specify which routes charge the most or cheaper. It’s all scramble hard to understand
By Muñeko g

This app is good, but i have 2 problems with it. 1st is using navigation on background no matter if you use the app, it’s killing my battery during the night if i forget to change my phone in full. 2nd- i tried to unsubscribe but it still charging me monthly fee. It’s saying that auto-renewal can be turned off from account settings, but this app doesn’t have settings.
By aeliuskaiser

The only tolls app that actually works!

Paid for upgrade and nothing happened.

Do not pay for any of the upgrades in this app! I’m angry because I paid for the upgrade, I clicked on it, the payment went through and no other routes appeared. Down at the bottom of the screen it said that there was an alternate route that only took eight more minutes and cost half the money but the only way I can get it is if I pay for the upgrade. I paid for the upgrade and it said that it would restore automatically and nothing happened. The app works great if you’re just trying to figure out one way to get to your destination and you don’t want to try and find any other alternate routes.
By Nciole9388

Paid for update to get alt routes. Cannot. When I touch link to get alt routes it just says I can do this if I pay for the upgrade and becomes a vicious circle. Today I was using it and it keeps saying I ne d to put in a destination - I did. It is there. But app doesn’t see it. No checkmark by destination address, just a red x. And the address is one I use frequently on the app and never had a problem
By Charley Rubbles

In a desire to maximize income the developers have created a product with very limited functionality and, given the lack of response to a number of messages, haven't invested in customer service either. The product advertised at the price is not what you receive - buyer beware. UPDATE 14Apr: Thank you for your response. My point, which you have overlooked, is that per my (still unanswered) emails to you, if you have a 2 axle trailer the product does not calculate tolls unless you purchase the commercial version - this was not made clear when I purchased the product.
By TagUK

Won’t even expect a valid address.
By Snowwmman

I paid for this app with all its benefits, and then all of a sudden the app is asking for more money to do the same things I paid for!
By Yanks3k2