Step into the Octagon® with EA SPORTS™ UFC® for mobile! Collect your favorite UFC fighters, throw down in competitive combat, and earn in-game rewards by playing live events tied to the real world of the UFC. FEEL THE FIGHT EA SPORTS UFC brings the intensity of MMA to your fingertips like never before. HD-quality visuals, intuitive touch controls, and action-packed gameplay create a unique combat experience for novice and veteran fight fans alike. TRAIN YOUR ULTIMATE FIGHTER Choose from over 70 fighters in four divisions and begin your journey to the top. From a Cain Velasquez takedown to Georges St-Pierre’s Superman punch, each athlete boasts a unique set of special moves. Win bouts, unlock new opponents, earn coins, and level up abilities – all while building your UFC legacy. Battle through your career and invest in training to watch your abilities skyrocket. PLAY LIVE EVENTS, EARN EXCLUSIVE REWARDS Play some of UFC’s biggest real-world bouts through in-game Live Events. Play fight cards for upcoming UFC events and earn exclusive in-game rewards. The more you play, the more rewards you earn! Punch your way to the top of the leaderboard and watch your payoff grow. FIGHT FOR GLORY Climb the ranks and hone your striking, wrestling, and submission skills along the way. With no limits to how much you can play, there’s always another fight just around the corner. See how you stack up against your division’s best and earn in-game rewards for dominating UFC icons in grueling Main Event matchups. Your battle for UFC glory starts now. Enter the Octagon and feel the fight! Important Consumer Information. This app: Requires acceptance of EA’s Privacy & Cookie Policy and User Agreement. Contains direct links to the Internet and social networking sites intended for an audience over 13. User Agreement: terms.ea.com EA may retire online features after 30 days’ notice posted on http://www.ea.com/1/service-updates. EA may retire online features after 30-day notice per e-mail (if available) and posted on http://www.ea.com/de/1/service-updates. 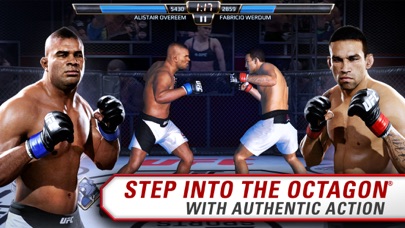 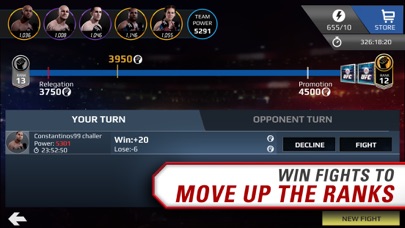 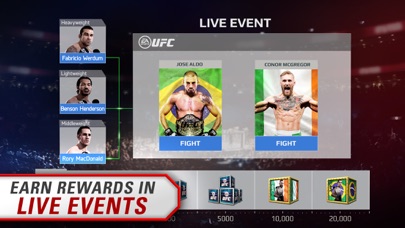 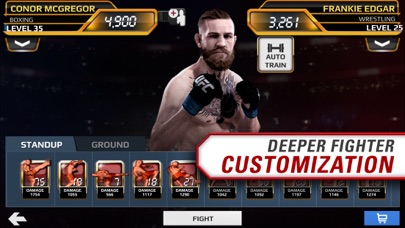 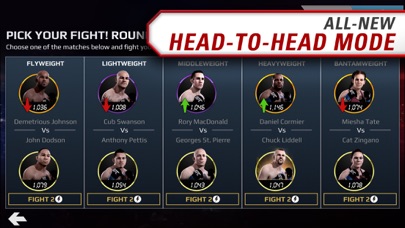 Love it but it needs to be updated

I love the game very much but it needs to be updated the roster as well there use to be events now there is nothing bring the events back bring head to head back I really enjoy this game!!
By alex vnt

This a great game

It is amazing
By vivchdhl

This game needs a major overhaul 1. Very repetitive 2. Fighters cost way to much gold and coins 3.constant glitches and bugs 4. When trying to use ability during fight will freeze and not let me do anything 5 sign in problems are constant also needs fixed when I sign in it says I have no connection and that’s bs because I can do everything else on my phone but not okay ufc so ik it’s a ufc issue
By hey6363636

Awesome Game but one thing

Every time I would win a difficult match It ends up saying disconnected then it doesn’t count it as a win. I Love the game but the biggest issue is it disconnects and I lose the progress I made. So far I love the different styles in fighting and I support you but please fix this problem or bug
By Duenasboy2001

Don’t know what you people did but now I have to reload the app every 5 minutes, winning a fight and it just freezes, I did like the game but time to uninstall before this virus messes up my phone
By fatboyhippoguy

EA sports has abandoned this game. It hasn’t had a real update in years. Live events stopped running in March 2019, and no new fighters have been introduced into the game since about that time as well. We’re lucky to get one fighter showcase a month when it used to be 3 per week. Head to head mode is repetitive and boring and is not run on a consistent basis. The last head to head season ended well over a month ago. Don’t waste your time downloading this dead game.
By Brose61