You check the weather. Why not add humor to it? Start your day off on the right foot with HumorCast: the original funny weather app. Baked-in are 1000s of phrases ready to complement the awful weather. We also use a state-of-the-art weather engine including NOAA and wrapped it up in an easy-to-use interface. Oh, did we mention 100s of beautiful backgrounds taken by world-class photographers and paired precisely to each weather condition? And best of all, we make it easy-as-pie to share so you and your friends can LOL together. Highlighted features: [+] Hyperlocal and accurate weather forecasting [+] Profanity-o-meter (Off, 13+, 17+) [+] Weather sayings in different accents, pitches, rate [+] Multiple weather locations [+] Weather alerts [+] Current/hour/7-day weather conditions [+] Hyperlocal rain graph (down to the minute predictions!) [+] Sharing features [+] US/metric units [+] Camera background [+] and so much more... ======================================= And now with Unlimited you get: + No ads + Weather for multiple locations + Premium quotes + Premium backgrounds + Premium themes + Text to speech To have access to Unlimited, you can choose between a weekly, monthly or yearly auto-renewable subscription. This is a recurring transaction that will be charged to your iTunes Account at confirmation of purchase and will automatically renew unless you cancel it at least 24 hours before the end of your subscription. Renewals will be charged the same cost within 24 hours prior to the end of the current period. You can manage your subscriptions and auto-renewal can be turned off by going to your iTunes Account Settings after purchase. Privacy Policy: https://humorcastapp.com/privacy Terms of use: https://humorcastapp.com/terms 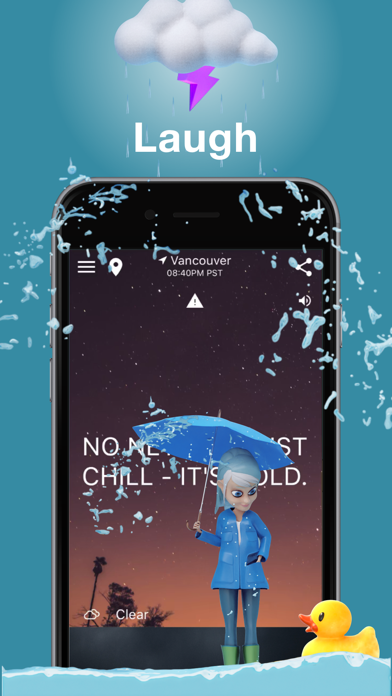 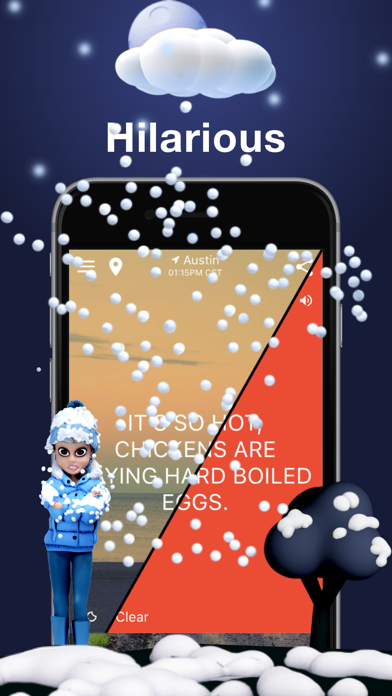 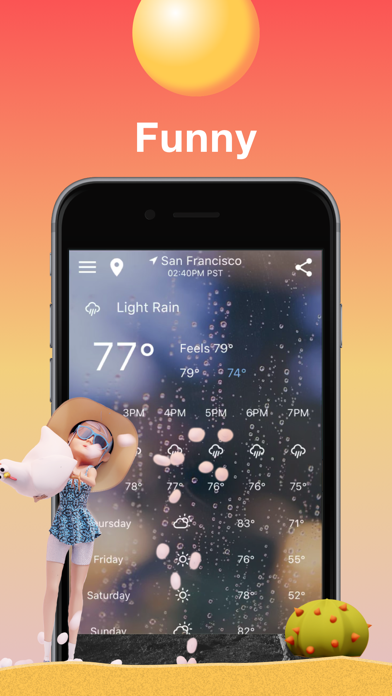 It took no time at all for this company to apply a charge to my card, the very first day I downloaded and accepted the free trial offer the charge showed up... free trial means having a set amount of time to check out this app before paying for the full thing
By tricalynn

Love this! It’s totally me!

I love this app, it says the same things I would say! Lol 😂 my friends saw it and asked me to share the app to them, because they wanted the app too. They were laughing so hard. 🤣
By come on?!?!?

Seems they are more interested in advertising a paid app then getting this app to work properly. Won’t be recommending to anyone
By unhappy user272656

Basically the title. The ad at the beginning makes the app in portrait mode on an ipad and when im a iPad with a keyboard, its soo annoying to rotate the ipad. Is it possible to make the ad in landscape mode and not portrait mode.
By imjonathont

The app said free trial but I was charged $36. I canceled my subscription the next morning and noticed I’d payed for a whole year! Beware of the FREE trial scam.
By dinkleman80

With all the free amazing weather apps, this one is very high priced.
By MomStl5

I’ve had this app for a few years and am reading several reviews stating it no longer works which reflects my experience. Mine will not open on my iPhone or iPad. It appears the app has been abandoned since support links go to nowhere. I’m unable to cancel my subscription as a result and would at the very least love to have the ability to cancel my subscription. I really loved this app. It had the best setting for adult language and was a side splitter full of humor while waiting for the weather to pop up on my screen.
By astarte66

Downloaded this app, but it won’t open! A waste of time!
By calcrews

App will not load

I just downloaded the app and it will not lot. I let the app load for several minutes and I have tried several different times all met with the app not loading. I have deleted it
By lolsndubd