MileWiz makes mileage tracking a breeze! Fully automated, low price, saving you money every day! Save yourself time, confusion and most of all money by starting with this easy-to-use mileage logging tool whether you are a freelance or you operate a business. “One of the more accurate mileage tracking apps you can use today is MileWiz. It features innovative tracking technology that is reported to be 95% accurate.” -The Budget Diet “A unique mileage tracking technology, and a design to protect against IRS Audits, MileWiz is a wonderful option for automatically tracking your mileage and viewing your trips on a map.” - App Picker “MileWiz uses an advanced algorithm, designed to reduce the use of GPS by the app to a minimum so as to conserve your phone's battery” - National Tech Center TRY FOR FREE. SEE FOR YOURSELF The mileage tracker that helps you optimize your tax deductions and reimbursements by tracking your trips accurately and automatically. And when we say automatically, we mean it. No pressing buttons, no entering addresses and no additional hardware. The accuracy level of MileWiz is the best you will find on the market. Tracking your mileage has never been easier. WHY USE MILEAGE TRACKER? — You get to report more miles and get more deductions — Tax-friendly way to export your mileage logbook — Audit protection — Convenience when tracking trips — Avoid time-consuming manual logging WHO SHOULD USE MILEWIZ? MileWiz is the best fit for you if you are: — Self-employed, a freelancer or you are a small business owner. — An employee who needs to track miles for company reimbursement when the company has such policies in place; — A ride share driver or a delivery driver — Business owner with two or more drivers who need to track their miles. Check our website MileWiz.com for more information about our Enterprise solution and MileWiz Portal. TOP HIGHLIGHTS TRACKING - Tracker runs flawlessly on background so you can’t forget to turn it on. - Trip log automatically starts within 200ft for maximizing your recorded mileage - Trip log ends within 1 minute after you park for precise accuracy - Pause GPS tracking when using public transport CATEGORIZE - Quick categorizing for 2 selected categories via left and right swipe - Automatic categorization based on working hours - Automatic categorization based on frequently visited places - Ability to “tag” trips (for example tag a client to bill the client for mileage and expenses) DETAILS - Ability to note trip purpose (important for IRS) - Ability to note additional expenses, such as tolls, parking, gas and other VEHICLES - Track trips from multiple cars, trucks and bicycles - Adjust the odometer for each vehicle REPORTS - Comprehensive reports and ability to export them in PDF and CSV (Excel compatible) - Allows you to define your own rates for tax deduction and reimbursement - The perfect logbook to present to an accountant or for an audit DATA PROTECTION - Unlimited cloud backup of your trips and logs SUBSCRIPTION & PRIVACY NOTICE The "MileWiz - Unlimited Driving" subscription removes the 20 trips per month limit, allowing you to track as many trips as you want. There is a monthly and annual subscription, with the prices indicated above in the buy buttons. The payment will be charged to your iTunes Account at confirmation of purchase. Subscription automatically renews unless auto-renew is turned off at least 24-hours before the end of the current period. Your Account will be charged for renewal within 24-hours prior to the end of the current period, and identify the cost of the renewal. You can manage your subscriptions and turn off auto-renewal by going to your iTunes Account Settings after purchase. The subscription provides no trial. Please, visit our Privacy Policy page for more information, at http://milewiz.com/privacy-policy/ Terms of Service can be found at: http://milewiz.com/terms-of-service/ 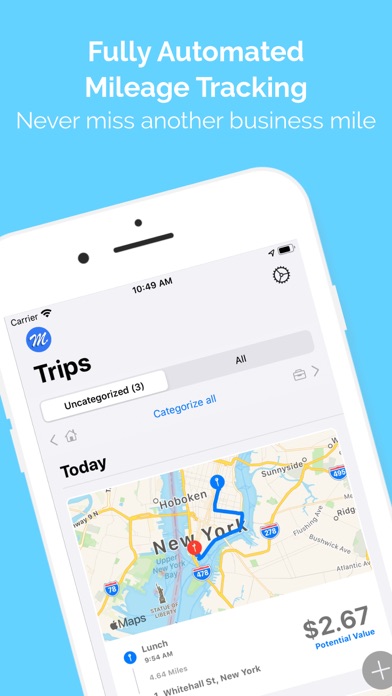 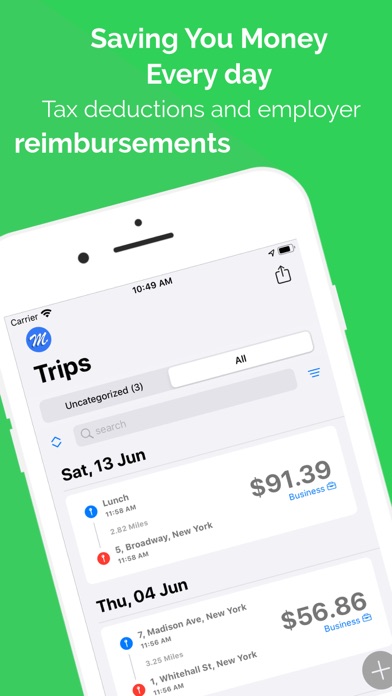 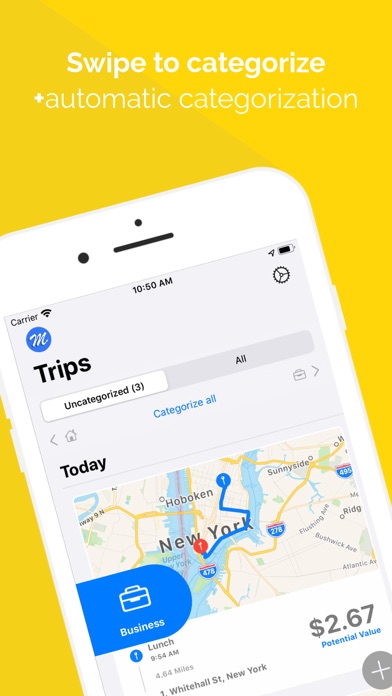 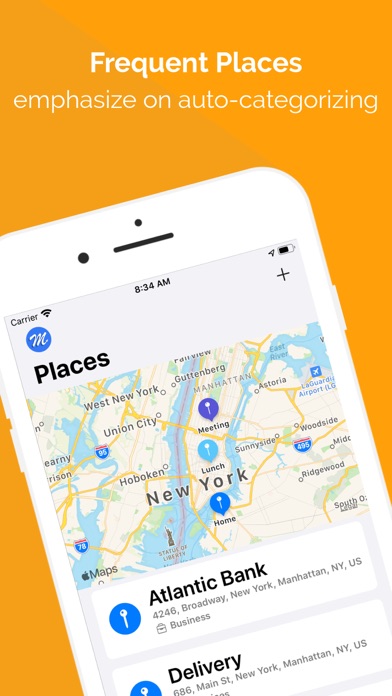 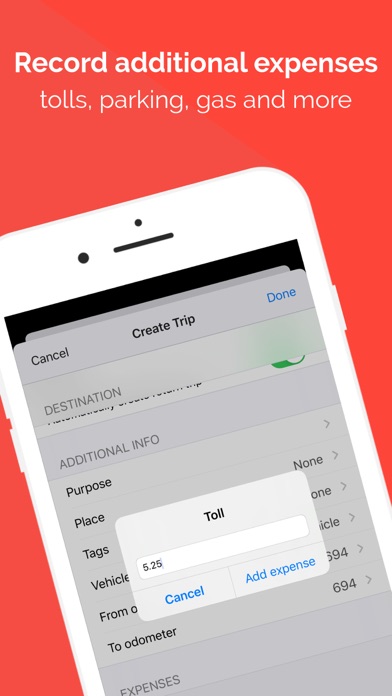 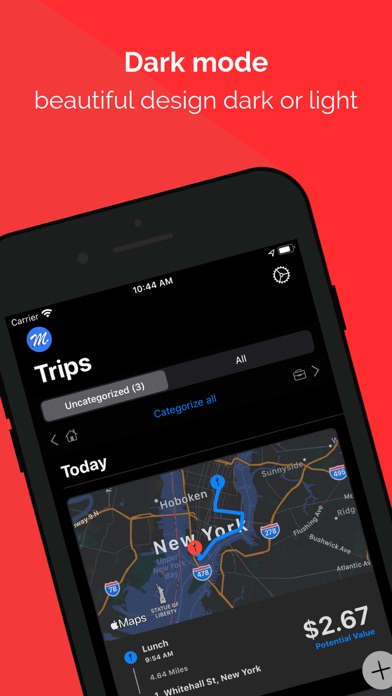 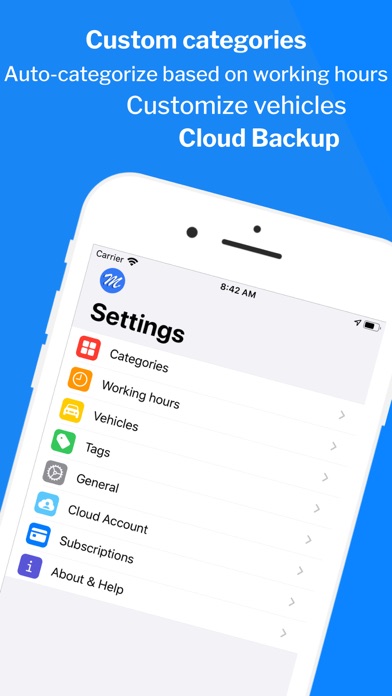 I’ve been a paying customer of MileIQ for around 6 months, and it is pretty decent. Yet, it relies on Bing maps because it is a Micro$oft app using their other products. So, I decided to get this app to try out the differences. This is way more accurate, but severely lacking in features. Primarily, unlike MileIQ, there’s no web page interface. This is a real problem when you’re trying to classify and look at trips to fill out reimbursement forms, or want to print out a report. I’m currently paying for both, but will probably start looking for another alternative if the authors here don’t implement a web interface soon. Also, settings changes here are not as intuitive. Changing the price price mile doesn’t look like you’re in the correct spot due to lack of bold font or coloring of font.
By Rood1967

Really easy to use

The automation makes the process of tracking miles seamless
By mattmetrovich

Would have been 5 stars until all my data was lost from having to sign back in.
By SeaDee222

It worked great the first year so I paid for three yrs AND THEN IT JUST STOPPED WORKING about 8 ios upgrades ago. I dont think its compatible anymore.
By Saveyourcloudspace

Originally this app worked great. The only part I didn’t like was the year end report did not have a way to add my company name. It was just a looonnngggg list of my business trips but didn’t state my company name at the top. THEN..... about a month ago it started breaking my trips into a ton of small ones and mileage was missing! I could drive 50 miles one way and get 10 notices from the app and only half the mileage was there if you add them all up. I guess the app was crashing en route. Contact support and they were quick to respond, however now I have to jump through some hoops to get it going again by signing up for a syncbits account to keep my data and then deleting the app and reinstalling. If I’m paying a monthly fee I would expect the app to work correctly. BTW, this is the first review of an app I’ve ever done which shows how irritated enough I am with it that I would write my first review.
By Olivia loves 🐯's

Use to be great, but it takes so long to sort my miles into categories or combine trips now it’s not worth it. I won’t be renewing my yearly subscription unless this is fixed.
By Schilpp

I bought the yearly subscription and after two months it stopped tracking me. It did not recognize my purchase and it took me forever to find a valid email address to get it re-established.
By Clau Valti

Charging me, but not tracking miles

I was just charged again this weekend for the app subscription, but the app hasn’t been tracking my miles for weeks. What am I paying you for if your dumb app won’t do what it’s supposed to do. It says I’m out of free miles, but I’m paying you....
By Applebees?