Prepare for epic versus-fighting action with your favorite Marvel Super Heroes & Super Villains in the ultimate cosmic showdown! Spider-Man, Iron Man, Wolverine & more await your summons to battle! Assemble a team & begin your quest to become the Ultimate Marvel Champion! WELCOME TO THE CONTEST: Captain America vs. Iron Man! Hulk vs. Wolverine! Spider-Man vs. Deadpool! The greatest battles in Marvel history are in your hands! The greedy Elder of the Universe known as The Collector has summoned you to a brawl of epic proportions against a line-up of vile villains including Thanos, Kang the Conqueror, and many more! Experience the ultimate free-to-play fighting game on your mobile device…Marvel Contest of Champions! SUIT UP WITH FRIENDS: • Team up with your friends and other Summoners to build the strongest Alliance • Strategize with your alliance, help them keep their Champions in the fight • Battle to the top in Alliance Events and take on Alliance Quest Series together in specially designed quest maps to earn exclusive Alliance rewards • Test your Alliance’s mettle by battling it out with Alliances from around the world in Alliance Wars! BUILD YOUR ULTIMATE TEAM OF CHAMPIONS: • Assemble a mighty team of heroes and villains (choosing Champions such as: Iron Man, Hulk, Wolverine, Storm, Star-Lord, Gamora, Spider-Man, Deadpool, Magneto and Winter Soldier) • Embark on quests to defeat Kang and Thanos and face the challenge of a mysterious new super powerful cosmic competitor, ultimately to prevent the total destruction of The Marvel Universe • Improve your team’s offense and defense with multiple Mastery trees COLLECT THE MIGHTIEST SUPER HEROES (AND VILLAINS!): • Collect, level up, and manage your teams of heroes and villains wisely to receive synergy bonuses based upon team affiliation and relationships taken from the pages of Marvel Comics • Pairing up Black Panther and Storm or Cyclops and Wolverine for bonuses, or making a team of Guardians of the Galaxy for a team affiliation bonus • The more powerful the Champion, the better their stats, abilities and special moves will be • New Champions are being added to The Contest all the time! QUEST AND BATTLE: • Journey through an exciting storyline in classic Marvel storytelling fashion • Fight it out with a huge array of heroes and villains in iconic locations spanning the Marvel Universe such as: Avengers Tower, Oscorp, The Kyln, Wakanda, The Savage Land, Asgard, the S.H.I.E.L.D. Helicarrier, and more! • Explore dynamic quest maps and engage in a healthy dose of action-packed fighting utilizing controls developed specifically for the mobile platform Like us on Facebook: www.facebook.com/MarvelContestofChampions Subscribe on YouTube: www.youtube.com/MarvelChampions Follow us on Twitter: www.twitter.com/MarvelChampions Follow us on Instagram: www.instagram.com/marvelchampions www.playcontestofchampions.com TERMS OF SERVICE: Please read this Terms of Service Agreement and our Privacy Notice before using our services as they govern the relationship between you and Kabam. www.kabam.com/terms-of-service/ www.kabam.com/privacy-notice/ 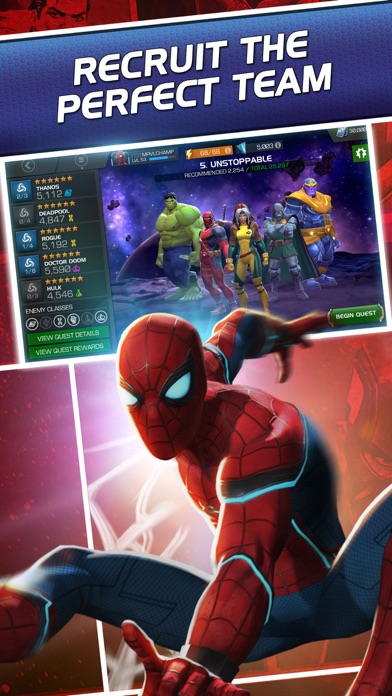 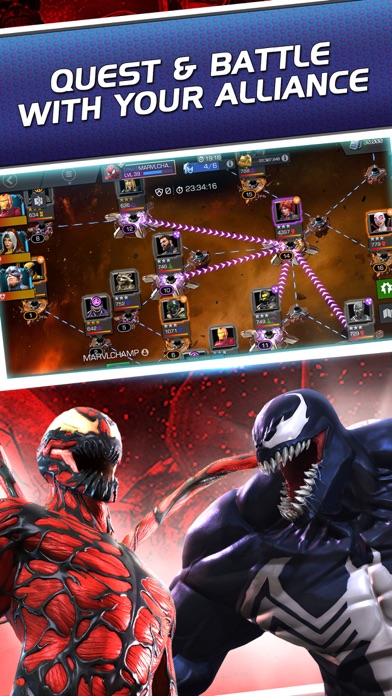 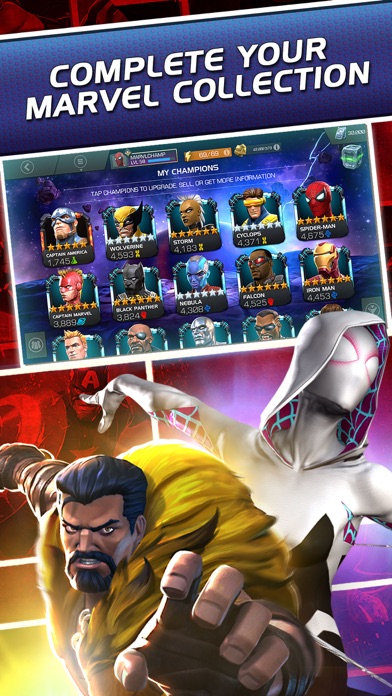 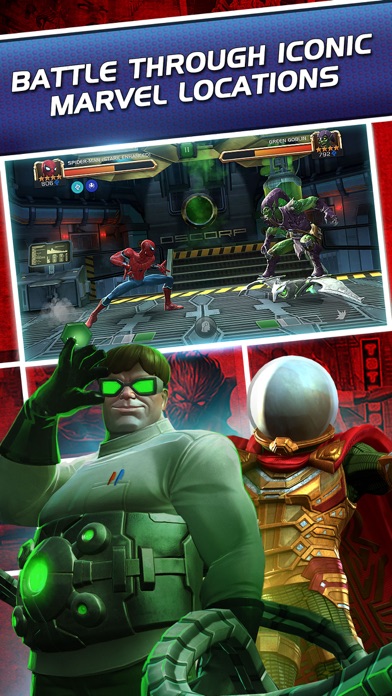 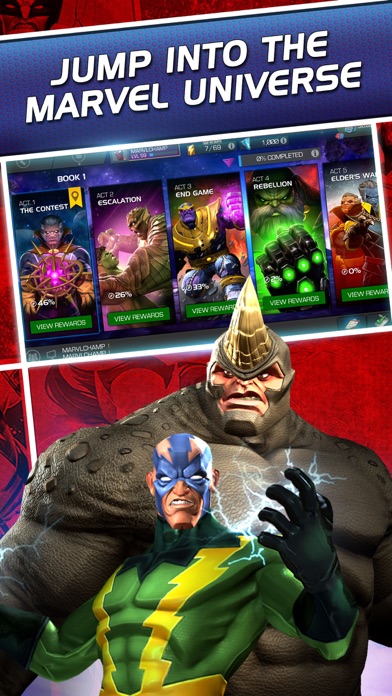 decent but one issue

i was almost finished with chapter 2 of the main quest now it says i have to do it over again. can y’all fix this???
By Joshc1535

Really need to have no life just to grind for champions just to be shut out by bots, modders and mercs. Lots of bugs
By Mcoc love

Game is filled with bugs

If you’re new to this game, DONT PLAY! There have been gamebreaking issues with the game for going on ONE YEAR, and there isn’t a fix in site. Input issues, FPS drops, issues with your commands being registered wrong, and it’s all because of the GAME DEVS. The game Devs have added on wayyy to much foreign code onto the game engine (Unity), rigging the AI to perform actions it’s not normally able to. This has broken the game to almost the point of unplayable. You CANNOT play this game in one sitting without MULTIPLE bugs impacting your gameplay. It’s a shame because I’ve been playing this game since 2017 and have all but given it up. The game is dying, almost anyone that’s played for 3+ years are leaving in DROVES. So again, if this is your first time downloading this game, DONT. There are PLENTY of other ways to waste your time than to play this game, as it currently is.
By reloymcoc

This game I've played since it release originally, and the constant parry and dex move making this game unplayable, they promised us a fix by the end of the year. They have not delivered anything they stated they would. They said they would install PVP in the game by the end of the year… well here we are still going with the bugs, WHICH BY THE WAY! They make the fights harder for you on purpose knowing the issues to make you spend $$$ with in-app purchases. KABAM u have serious work to do and better deliver when you do actually fix this game IF YOU EVER DO. Otherwise than that amazing game with amazing storyline and the biggest roster of marvel heroes you’ll ever see, if your a fan of marvel this is the best.
By patrick954

Was my favorite game

I first started playing this game well over 5 years ago, and absolutely loved it. Progress was well balanced, and I never felt like I had to spend money to advance. Within the last few years, though, that's changed. The list of items you can sell for gold and resources is dwindling, and new characters and features are added while game play issues go unfixed. My progress has slowed to a crawl and I'm starting to feel like I have to buy extras if I'm going to get anywhere. I'm starting to enjoy the game less and less, and am about to uninstall.
By Moonshade

Great game with no follow through. I’m bumping up the review for now because they have responded and game play seems to be getting better. Keep up the hard work
By n📀adds

The game used to be fun to play and challenging. It’s clear Kabam is just using it as a money grab now. Every bit of new content released is bugged and they put no effort into fixing problems because it’s causing users to spend more to get through content with the bugs. Even old content is almost unplayable now because of these issues - Update I got an email asking me to submit a bug report. That’s laughable, I’ve submitted probably 20-30 during my time playing the game, each got the same copied and pasted response and none were ever fixed…. Laughable customer service
By BB0113456779

I’m extremely disappointed with tags being used for the new cavs. It is a terrible change with 0 heads up. Some of the tags only include some of the worst champs in the game. Guardians of the galaxy? Seriously? As someone playing since near release I’m extremely disappointed in this change. On top of this, the parry and dex bugs are ridiculous. bugs are ever present in daily gameplay. It’s near impossible to play at points and the compensation we get is god awful. It just ends up expiring in the stash anyway. I’m very near quitting the game if these trends continue. Do better.
By reeee12

The game is awesome and entertaining but the parry and controls issue is very annoying, please fix.
By hypersport phantom

Great game,I’ve been playing it for years but can we have the ability to sell our characters again,it’s a little hard trying to find resources when we could sell champions to get them
By Gio50TFG