Drive your car through a zombie apocalypse in this massive follow-up to the chart-topping hit Earn to Die! An evacuation ship is waiting on the other side of the country. The only thing that stands in your way: city after city overrun by zombies . With only a run-down car and a small amount of cash you face a familiar situation... to drive through hordes of zombies in order to survive! BRAND NEW STORY MODE Earn to Die 2 introduces a massive new Story Mode, five times longer than its predecessor. The game departs its familiar desert setting and delves into the depths of cities infested by zombies. MULTI-TIERED LEVELS: Levels are now multi-tiered! Drive across decayed highway overpasses, via underground tunnels, or smash through epic zombie filled factories. Whichever path you choose to take, you won't be able to escape the zombie hordes - your only choice is to smash through them! BUILD A ZOMBIE-SLAUGHTERING MACHINE Unlock and upgrade 10 different vehicles, including a sports car, a fire truck, and even an ice-cream van. Each vehicle can be equipped with a range of upgrades, such as armored frames, roof-mounted guns, boosters and more. Those zombies will stand no chance. DESTRUCTIBLE VEHICLES Vehicles are now fully destructible. Hang on for your life as your vehicle gets smashed to smithereens if you aren't too careful. MORE ZOMBIES. MORE DESTRUCTION. MORE MAYHEM. What are you waiting for? That rescue ship isn't going to wait forever! Prepare yourself for a wild ride - and seriously, there is nothing like smashing through zombie-filled factories! 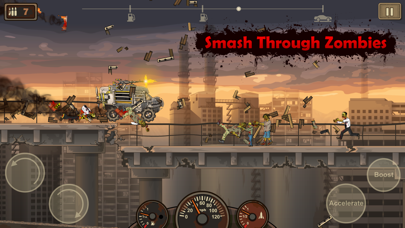 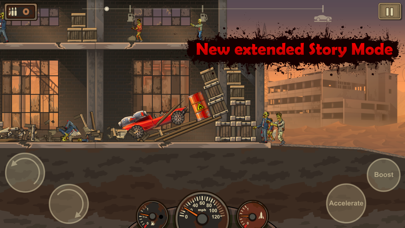 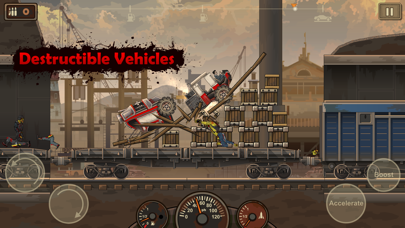 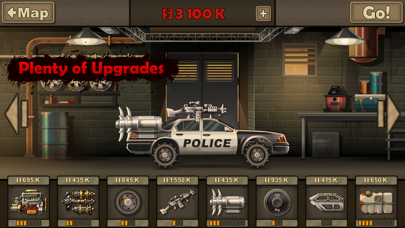 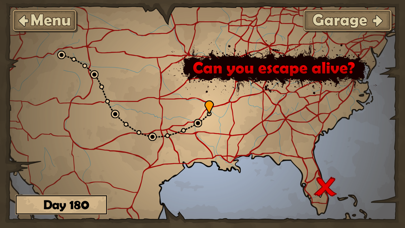 So let me start off with this game is almost impossible and grindy.
By thebrothersyt

Ok maybe not hilarious, but there are definitely some funny moments - my best one so far was a zombie that ran up behind my car, leaped into it and then quickly fell off... And then moments later I realized its arm was still hanging onto my car and flapping all over the place 😆 Seriously though, if you like these types of side scrolling, car racing up and down hills and doing flips and stunts, you'll love this game! The physics are a bit floaty for the car, and occasionally you can get trapped upside down in a low ceiling area. But otherwise it's a lot of fun and definitely has that "one more time" feel to it. Lots of cars to unlock and tons of upgrades to buy for them as well. And the number of things that can get destroyed is great! Ragdoll physics on the zombies, tons of parts and places where your car can break, lots of crates, boards, and more to smash into, plus explosive barrels as well! Even the sound and music are good. Just all around well made game.
By artfoundry

Hey! I recently bought this game about a week or two ago and I’ve been enjoying it a lot. For 99 cents, it really is a good bang for your buck and a good time waster. However that’s all it really is. After the 3rd or 4th new car, the game just gets repetitive and boring. As things get more expensive, progress just gets slower and slower. There are no new enemies and it’s just the same old same old. Don’t get me wrong, I like to see the cars get upgrades with the armor and weapons but for how long it takes to get said upgrades, the reward I get for doing so just doesn’t feel worth it. It will take me 4 or 5 runs of the same level to get a single price of armor for my vehicle, but still barely make it much farther than before. TLDR: Fun, but gets repetitive and upgrades don’t feel powerful enough for their pricing.
By A Standard FNaF Franchise Fan

I'd loving it! The best spending time game ever

Best game on a phone ever. Keeps you entertained and is more difficult by level
By breast sucker

Before you say this guys doesn’t know what he’s talking about, hear me out. A game is something that whether it be easy or hard there is a chance you can lose a chance you can fail. Not in this game you push the on the gas and that car goes left to right and that’s the game. You buy “Upgrades” but instead of this being something you have to choose what is and isn’t the right ones you just get them in the order that they are there for and that’s it. This is as much of a game as cookie clicker
By Lets Go Gaming

More by Not Doppler