Connect matching dots and solve fun puzzles! Play Free! Join two brave dots as they progress through beautiful worlds spanning the arctic tundra, fiery jungles, and into outer space in the #1 hit game in over 100 countries. Be prepared to drop the pesky anchors, clash with monster dots, blast away comets, and crush the gems across hundreds of challenging levels! More levels are on their way, and if you’re ever in a jam, there’s always a power up to help! = WHY YOU’LL LOVE TWO DOTS = • FREE to play! • ADVENTURE through 4450 addictingly fun levels • CONNECT one Dot to another, sink anchors, make a line, create bombs, extinguish flames, and much more • SMART, fun, and thoughtful design • ENJOY beautiful minimalistic design and relaxing game music • PLAY at your own pace to make the perfect move without having to worry about a clock • CHALLENGE your friends on Facebook and see how you match up! • TREAT yourself to sweet rewards available daily and through special event modes Start connecting on your iPhone and iPad today! Color blind mode is free and available to all. ------------------------------------ LET'S BE FACEBOOK FRIENDS facebook.com/playdots FOLLOW US ON TWITTER twitter.com/TwoDots ADD US ON INSTAGRAM instagram.com/dots Having any problems? Any suggestions? We would love to hear from you! You can reach us at support at td-help@weplaydots.com PLEASE NOTE! Two Dots is completely free to play, but you can also purchase some items within the game for real money. Just disable in app purchases on your device if you don't want to use this feature. Use of Two Dots is governed by the Dots terms of service: https://www.dots.co/terms/ 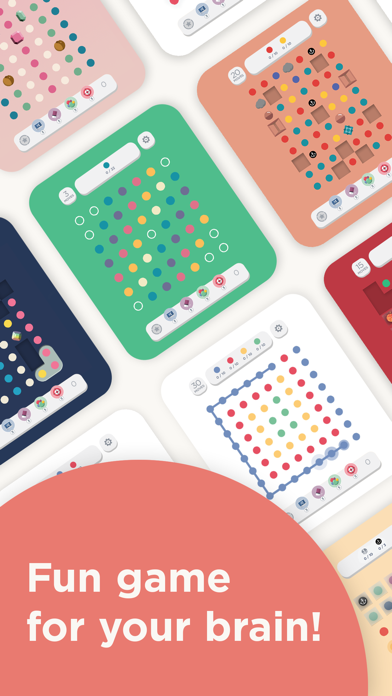 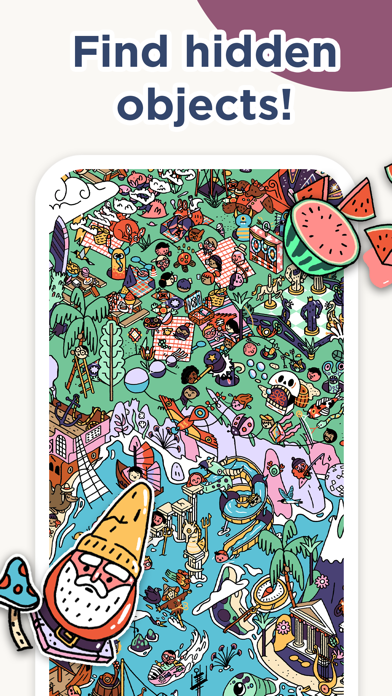 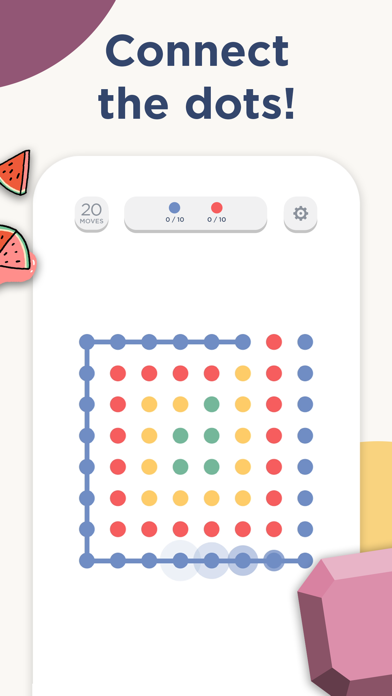 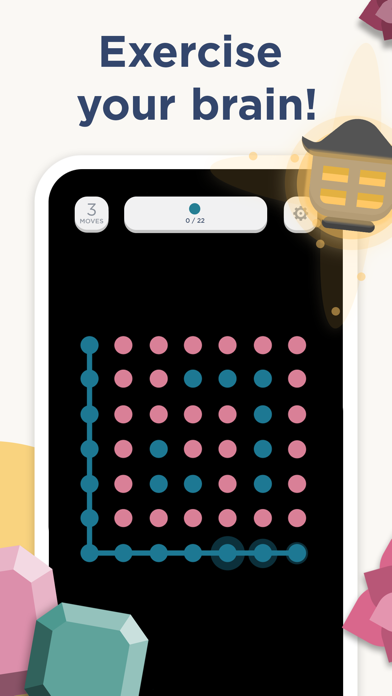 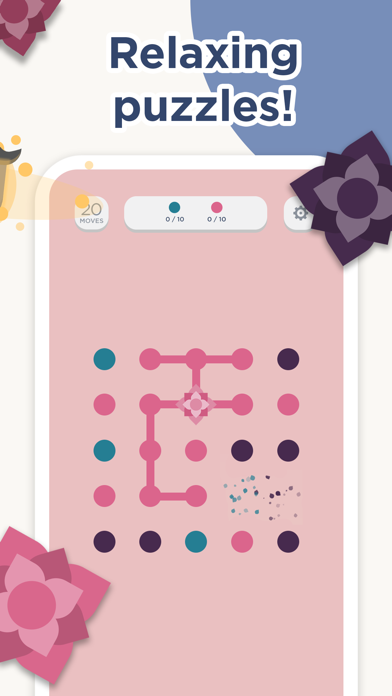 I’ve had this game a long time. They’ve changed it to where it costs more coins to get extra moves and color and laser etc. They’ve changed how when you go to keys for your boxes every time you log in it’s status is 4 hours so you no longer get 3 boxes for 55, it’s always 25 per box. Now it’s not even showing up on my account for correct updates. It’s not giving me my squares or dots I would have won many many championships but it’s not giving me what I’ve earned!!! Just today 2/2/23 it owes me 600 some dots!! I placed last week finally in the top 7 and it didn’t even give me my reward! Fix this problem now!!
By Tania hues

Came here to say, the Ad to this game is flat out stupid. Thank you for your time.
By that honest gut

I used to LOVE this game and would play it constantly throughout the day. I don’t know when this change happened, but the timed power ups instead of single-use power ups have totally lost me when it comes to playing nearly as often. Used to, I would gladly watch whatever ad to collect single-use power ups to save for a rainy day to use on an extra hard level I couldn’t pass. Now however that seems to have been ruined by these 15 minute “unlimited” power ups. So now i have little no desire to pick the game up when I know I’m stuck with no help waiting for me. I would rate this 5 stars without that change.
By Lpendie

The ad previewed a challenging mind game. This game is nothing like the ad.
By EM 71

This game is WAY better than advertised. I’ve been playing this game for YEARS and it’s perfect. I love it. I never get tired of it because theres new challenges and different mechanics all the time! And i love the Scavenger Hunts, Treasure Hunts, Readings, Flip challenges, etc. And i love that you can still play the game in its entirety without paying extra. (In-app purchases are not necessary unless you dont want to wait for lives to regenerate or you havent won enough challenges to get Items like Boxes or Color Bursts) The ONLY thing I wish they would change: it would be so great if the Collectibles (postcards, badges, medallions, etc) were larger so that we could save them and use them as wallpapers on our phones because they’re so pretty!!
By JazzleB

The puzzles was not the same as the ad.
By waly2020

Being playing this game for a long time, they might say it’s a bug but they always applying fixes so it’s not the problem. Started noticing that during the “races”, points were not being credited and prior to this the previous “dots race” was number one and suddenly all disappeared, the day after a new “square race” started, cold turkey…. On this square race to win in the span that kept record, out of 21 games 8 were not credited, so all of the goal of making those points is a waste of time. So, if downloading this game be aware of this fact that believe is not addressed by the developers and becomes frustrating after investing a lot a time to “relax”.
By Edw456

Users shouldn’t have to hunt down a way of contacting developers to inform them of game malfunctions. EVERY dots race or squares race malfunctions. Photographic evidence shows X number of dots (or squares) accumulated overall, complete a level collecting Y dots (or squares) and yet the overall accumulation doesn’t change. Understandably, free games are going to have glitches but this has been going on since they launched this feature. The ad support isn’t just annoying but it’s loud and disruptive. Options to earn power ups have declined. It’s a way to waste time but when a system is riddled with issues, I won’t spend a dime on it.
By GreenRibbonWarrior

Game of Luck, Some Skill

I was addicted to this game when I first started playing it. However, after a few weeks, it’s just an annoying app on my phone that takes up 5 minutes of my time until I run out of lives. The thing I like least about this game is the fact that it is truly random. When you lose a round, it reloads in a different order; there is no “puzzle solving” for a lot of these as there is limited learning from previous mistakes. Second in line is the fact that some levels are just not winnable without using boosts. This is compounded by the fact that the levels reload with a different ordering of the dots, and without being able to learn from previous mistakes, it’s a pure gamble of whether you’ll get a good layout. Third in line is that after you do win a level, you have no choice but to use a boost at the start of your next round, which can often clear out half the game space so that you barely play the level at all. It’s a fun game, but after about 3 weeks of it and getting pretty far along, I’ve just found myself more annoyed with the upper levels than anything. I don’t spend money on games, and I spent a little bit at the beginning just to “save” the coins that you earn after winning a level. It turns out that that the feature only lasts one time and you have to continuously buy storage for the things that you’ve “earned” in the game. All in all I’ve just come to wish it was better long term and actually helped my brain more.
By ashbash_05

but I never would thought I would see the day where I ran out of levels to play :( please put out more!!!
By wkemamsmsmsn