Adobe Photoshop Lightroom is a free, powerful photo editor and camera app that empowers your photography, helping you capture and edit stunning images. Easy-to-use image editing tools like sliders and filters for pictures make photo editing simple. Retouch full-resolution photos, apply photo filters, or start photo editing wherever you are. EDIT YOUR PHOTOS ANYWHERE Transform raw photos with one of the world’s most intuitive photo editing apps. Tap and drag sliders to improve light and color, apply photo filters for pictures, and more. Breathe life into your photo editing with our leading photography tools. Retouch light and color to make photos pop. Easy sliders let you control photo properties from your phone screen. Crop and Rotate tools find the right size and aspect ratio to best show off your camera work. Create clean shots with straight lines by adjusting the perspective with powerful upright, guided upright, and Geometry tools. Experiment and compare different photo versions without losing the original and pick your favorite look. Access all your presets anywhere. Image edits on one device are automatically applied everywhere else. EDIT THE FINE DETAILS Finesse details with the advanced picture editor. Control images with selective adjustments. Remove almost anything with a touch of the Healing Brush. Local Hue Adjustments as part of selective edits let you alter hue and saturation with precision and elevate your photos. Advanced color grading lets you have more control over color editing and achieve stunning effects. Import your own graphical watermarks and apply your personal touch. Get inspired and learn to use the photo editor to its potential with easy, interactive tutorials from fellow photographers. LIGHTROOM PRESETS SIMPLIFY PHOTO EDITING: Achieve professional photo editing faster with presets - filters for pictures with unlimited customization options. Presets make every step of photo editing visible so you can learn easily. Be an even more creative picture editor. Combine presets to recreate your favorite photo effects perfectly every time with just one click. PRO-LEVEL CAMERA Unique phone camera controls unlock your photography potential. Choose from exposure, timer, instant presets, raw, and more. Enjoy more control over your photography on the go with capture modes such as Professional and HDR. SMART ORGANIZATION FOR YOUR PHOTOS Adobe Sensei harnesses the power of AI to tag and organize your photos based on the objects or people that are in them. A quick search for “mountains” or “Maria” will display all the relevant photos. Create albums with a click. Use handy organizational tools like ratings and flags to mark and group the photos you like best, and see suggestions for the best photos across your albums. ADVANCED PHOTO SHARING Group Albums allow you to invite others and collect everyone’s photos in one place. Share your creative process with other users in the Discover section of the app so they can see how you got from start to finish. Lightroom galleries showcase your photos online. Photo edits sync seamlessly, so any changes you make are always up-to-date. Get inspiration from other creatives in Lightroom with personalized content, free community presets, and the ability to follow your favorite authors. WORRY-FREE ADOBE CREATIVE CLOUD STORAGE: The Lightroom image editor is the best cloud-based service for photography lovers. Retouch your full-resolution shots and have both originals and edits backed up to the cloud, ready to access anywhere. Searchable keywords are automatically applied to help you sort photos without tagging them. Fine Print You must be 13 or older and agree to Adobe’s terms and privacy policy: https://www.adobe.com/legal/terms-linkfree.html https://www.adobe.com/privacy/policy-linkfree.html Do Not Sell My Personal Information: https://www.adobe.com/privacy/ca-rights-linkfree.html 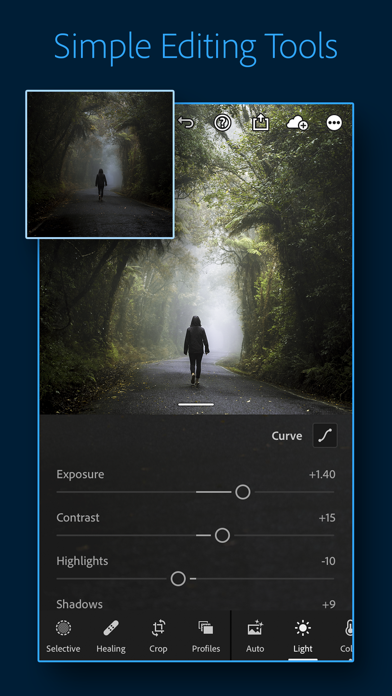 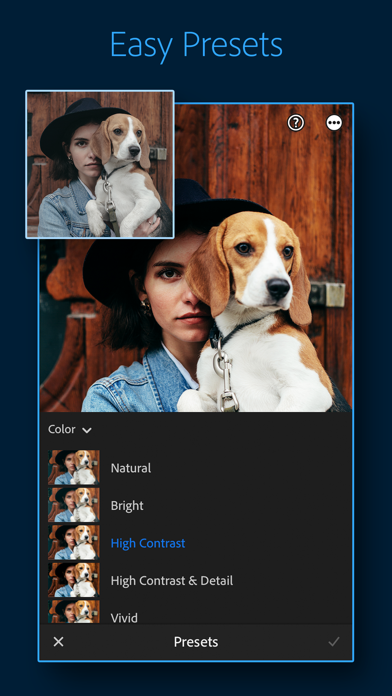 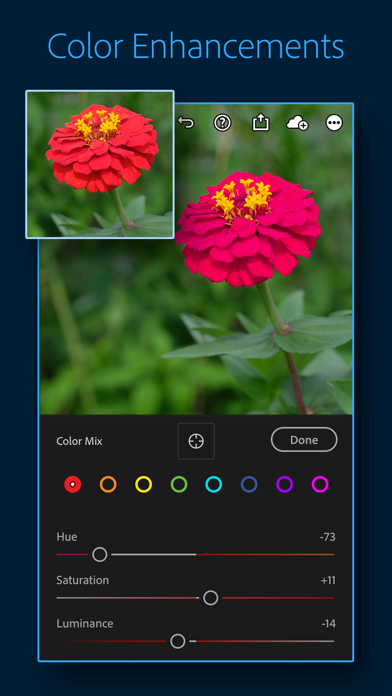 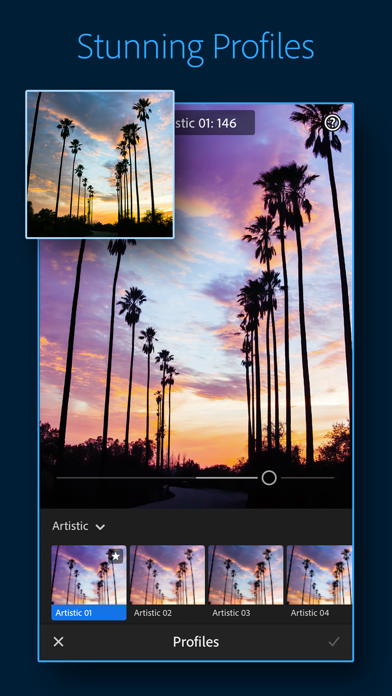 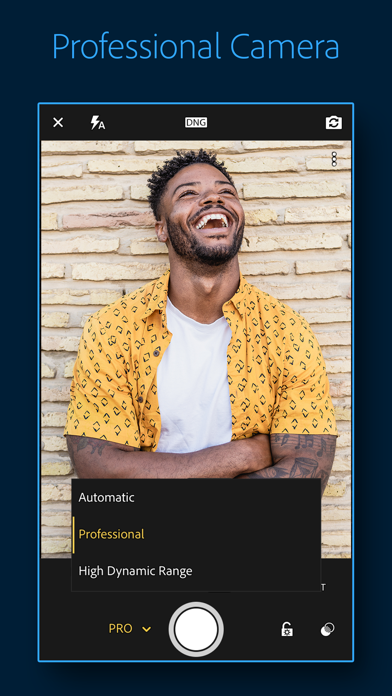 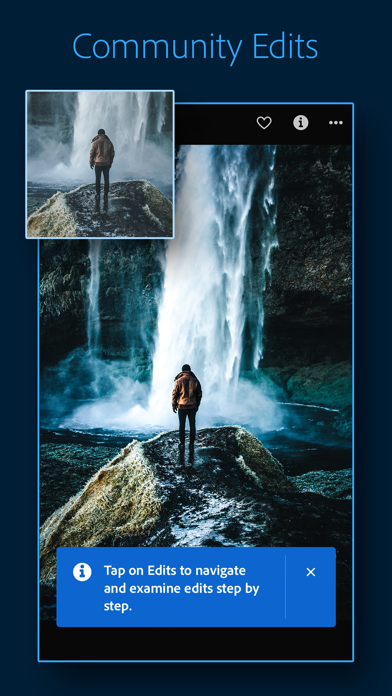 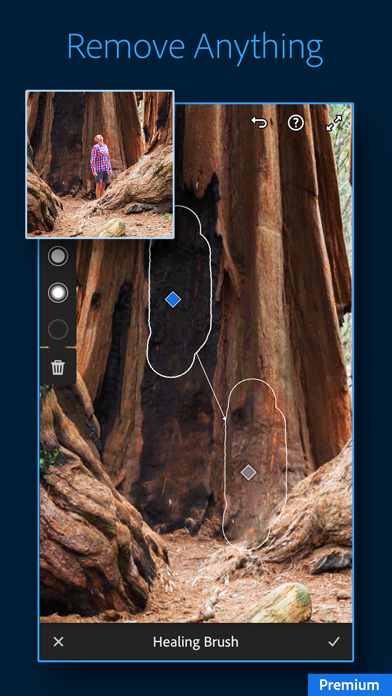 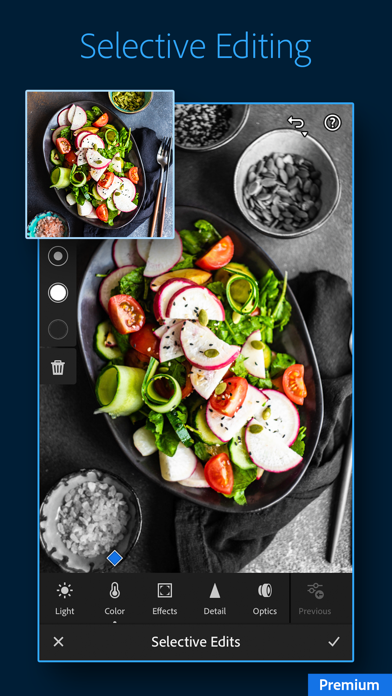 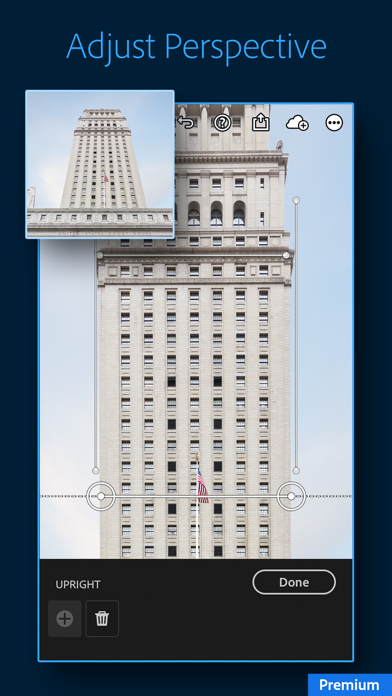 Fix your thing, cmon, there is no even setting to let access camera roll in iOS settings. Add it!
By @grozyan

All photos are now unedited and save as originals instead of the edited photos i had before, anything edited before the update is ruined
By I'm so hungry

This is my first product review, which I feel compelled to write in hopes that Adobe will read it & address the massive experience-killing bug it introduced with this version - probably on a Friday afternoon. As an 11 Pro user, I frequently take advantage of the 2X optical zoom lens. Cycling between active lenses in the control strip used to be a fairly simple endeavor: tap the icon, and the lens changes. This is no longer possible, because the icon now badly overlaps the big shutter button. Such a basic failure of UI that I’m not sure who cleared this for release. I had been using Lightroom for some time, even in favor of the native camera app, thanks to its array of powerful features. Thanks to this bug, taking photos with Lightroom is now an exercise in frustration. I should note that trying to hold down the icon in hopes that it will somehow “override” the shutter button & let me switch lenses did NOT work. I’ve managed to do it with this bug in place, but not without also taking a bunch of photos I didn’t want. This issue has been present for at least the past couple of months, and reinstalling the app did not resolve it - would have thought someone would notice a huge flaw like this by now. I wish we could include a screenshot with our reviews so I could show y’all just how bad it is. I really hope it’s gone in the next update! And while you’re at it, Adobe, please make it so we can switch to the lens we want without having to cycle between them in sequential order. Holding down the icon should bring up a menu of all 3 lenses & make it possible to select one & release the button. It would save a lot of time if trying to capture an elusive shot.
By Perpetual Nomad

Love the features of LR. The latest iOS update took away the option to share to IG stories, only able to post. And would be handy to have the option to export and override the original photo in iPhoto. Just an idea, but works well
By Roxy375

Selective edit works only if I get it all in the first go. If I lift my finger, there is a problem. I cannot see where I am marking, and the erase tool doesn’t work half of the time. Otherwise, I can not recommend this app enough! I absolutely LOVE Lightroom.
By mrs.mattis

The app is suddenly over-saturating every photo I upload. I’m having to turn the saturation down -4 to -6 to make it look like the original photo. I’m not clicking “auto” and this began shortly after last update
By Isaacd94

I love this app, it changed my photography to the next levels!!
By Sai satya Gyan

Very frustrated as it is not downloading my pictures from my iPhone. Only 20 out of hundreds.
By Transport jigsaw