"Time to put metal to the pedal and use those shooting skills to do some wrecking! Autobirds and Deceptihogs ROLL OUT! Angry Birds and Transformers collide in this action-packed, 3D shoot ‘em up adventure! The EggSpark has transformed the eggs into crazed robots who are destroying Piggy Island, but who can stop them?! Autobirds, ROLL OUT! The Autobirds have some tough bots on their team – Red as Optimus Prime, Chuck as Bumblebee, and the rest of the transformerized flock! But the courageous Autobirds can’t save Piggy Island on their own – to stop the EggBots they’ll need to join forces with their arch rivals the DECEPTIHOGS (like Decepticons only smellier). Can these bitter enemies team up and put aside their differences? Yeah right… - COLLECT! Unlock a roster of heroes (and villains) with unique attacks and abilities! - DESTROY! No need for slingshots when you have LASERS! - VEHICLES! Oh, yes! Cars, trucks, tank or planes – transform to dodge falling hazards! - UPGRADES! Get stronger weapons and new abilities for every Transformer! - TAG TEAM! Borrow a friend’s character to unleash a devastating two-bot assault! - ENERGONICONS! Take smaller robots to support you smashing blocks! - EVENTS! Weekly events allow you to compete to win prizes! - ACCESSORIES! Customise and enhance your Transformers with iconic items! - CRATES! Earn prizes by opening crates full of resources, accessories and even characters! - SPARK RUN! Test your metal on 160 levels of increasing difficulty! - QUESTS! Complete daily challenges for rewards! -------------- “Oh so fun...I was hooked on the new shoot-'em-up gameplay.” – Jason Cipriani, CNET “Angry Birds Transformers captures the thrills robots in disguise held for the young me, while also introducing a bold new gameplay mechanic to Angry Birds.” – Stuart Dredge, The Guardian “Enjoyable to play and its sense of humor is in exactly the right place.” – Shaun Musgrave, TouchArcade “This is one game in the Angry Birds stable that you're not going to want to miss.” – Brittany Vincent, Modojo -------------- *NOTE: - Angry Birds Transformers is completely free to play, but there are optional in-app purchases available. - A network connection is required for some game features. - When you play for the first time, there is a one-off download of additional content in the background. Visit Angry Birds Transformers Headquarters: http://transformers.angrybirds.com/ Follow the flock: http://twitter.angrybirds.com http://facebook.com/angrybirds Discover the rest of the Angry Birds universe: https://www.angrybirds.com/ -------------- Terms of Use: https://www.rovio.com/terms-of-use Privacy Policy: https://www.rovio.com/privacy Important message for parents: - Direct links to social networking websites that are intended for an audience over the age of 13. - Direct links to the internet that can take players away from the game with the potential to browse any web page. - Advertising of Rovio products and also products from select partners. - The option to make in-app purchases. The bill payer should always be consulted beforehand. " 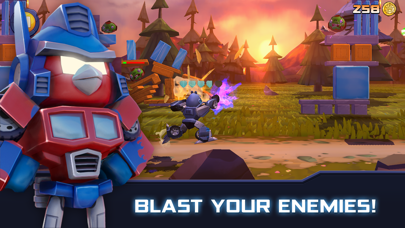 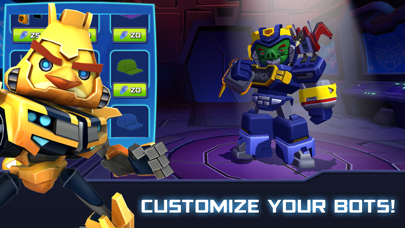 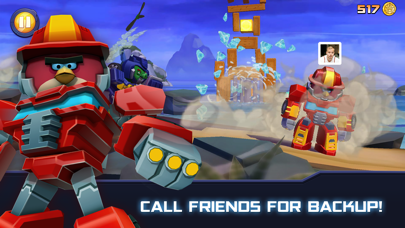 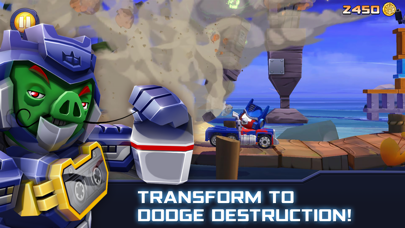 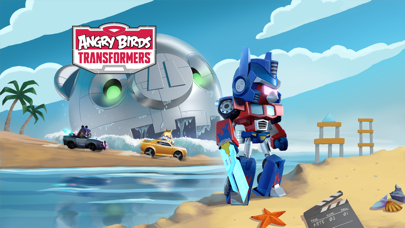 Transformer more than meet the eye

Great game but one thing

The game is awesome, the graphics are very good, and each character has its own way to attack. I had an old progress that I lost(not in this IPhone) but I had a lot of characters including all the Combiners and finished a lot of squads and I had over 8,000,000 coins 5,000 gems and not much spark but if there is one way to pass the progress to the game that would be good and if there is give me instruction so I can get it back, but now to what I came. Like I said before the game is good about everything, but there are somethings that are not right, like Tripticon’s size, you should put it more like the new Omega Supreme. Sentinel Prime for my opinion he is not colored well,he had blue and orange, the game should fix that to. Ultra Magnus’ looks identical to Optimus Prime, yes his body was made from Optimus’ Prime but they don’t have to be identical, just like with Bumblebee and Rodimus Prime, or Galvatron or Motormaster. Also the characters should have there own personalities because Kup and Lockdown have the same personality, the game would be more fun if that is added in the next update. Also,every time you buy one character pack on the current event the price increases lets say I buy Volcanicus for 750 gems, the prize increases to 1000 gems if there is another offer available to get. Also the War Pass has gotten bad, when you first made the War Pass the rewards of the infinite pass(over level 50) the gave an Iron Box and now they give none,it would be more fair if you gave back the Iron Box and the ones that buy the Prime Pass they get the Gold Box. The reward system is not like Zooba’s but every once in a while you don’t get many good things, only get a lot of coins that are very easy to get and not many gems. Also, many don’t get gems because there so hard to get,I do understand that the game wants to generate money but don’t make it so notable,it will be great if they gave away at least 500 gems in every update. That is all for now, the game really brings me back to the 80’s and is very good for my opinion, it would be better if you put those things I told you,I don’t expect all of these updates in one but I tell you if they put that it will be more fun and a lot more enjoyable.
By Ivan Arrache

Thank you for the amazing Childhood
By Jakeieboo

This a game is loved
By Make the price better

Old but good
By jdnxnxnannanxxnjz