Fight for Your Side. Command The Galaxy. The Galactic War rages on. Where does your allegiance lie? Will you side with the Rebellion or the Empire? Join the fight, build your base, recruit and train your army, strategically plan your defenses, and lead your troops to victory on war-torn worlds throughout the galaxy! Battle with or against iconic characters like Darth Vader, Luke Skywalker, Han Solo, and Princess Leia, and utilize or destroy units like AT-ATs, Speeder Bikes, Wookiee Warriors, and Stormtroopers. Join millions around the globe to play in this epic combat strategy game. Commander, the fate of the galaxy is in your hands! FEATURES • CHOOSE to fight for the Rebellion or the Empire • TRAIN your troops to charge into battle • BUILD units and vehicles with multiple upgrades • DEFEND your base against enemy forces • COMPLETE original story missions and gain additional rewards • LEVEL UP your heroes, troops, vehicles, and more • BATTLE on different worlds within the Star Wars™ universe • TEAM UP WITH FRIENDS and allies to form the ultimate squad Upgrade your Planetary Command building to scout and relocate your base to new worlds such as Dandoran, Yavin 4, Er’Kit and Hoth to expand your command and strengthen your squad. For the best experience, we recommend playing this game on iPhone 5 or later, iPad 4 or later, running iOS 8.0 and above. iOS versions below 8.0 are no longer supported. Playing on an iPhone 4S may result in longer load times and slower performance. Additional information: · The game is free to play; however, in-app purchases are available for additional content and in-game currency. · Use of this application is governed by Zynga’s Terms of Service, found at www.zynga.com/legal/terms-of-service. · For information about how Zynga uses personal data, please read our Privacy Policy, found at http://www.zynga.com/privacy/policy. 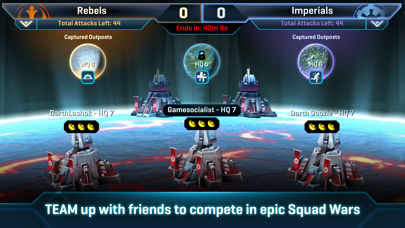 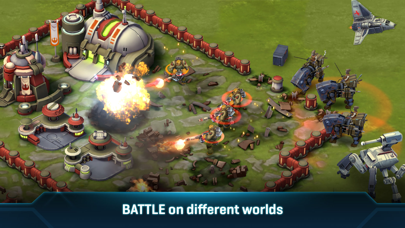 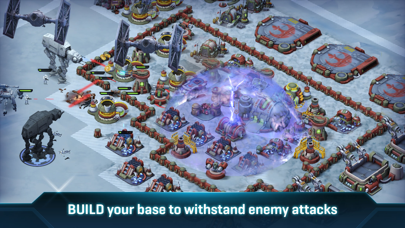 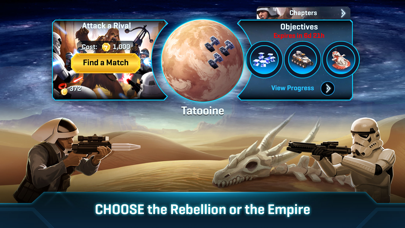 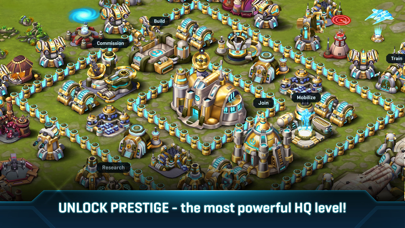 Sorry to bother you, but, would you mind changing tomorrow’s event to the AT-Hauler? Thank you very much
By ふじさきはやと

I can describe this game in one word. AaaaaaAaaaaaaAAAAAAQOooooooooooooooooopooopoihkkybnnhuuuuu! Why can’t you do anything? Just kidding. It’s really fun. I like this game. In fact, it is one of the best games in the world.
By Anonymous User of Apple

So far the game works well, only a few problems I can see. 1: kinda unfair to not see if someone is in a squad. Attack a relatively easy to defeat base only to get stomped on by some over leveled enemies from the squad center. A large army of 44 shore troopers, 4 at-st’ and a royal guard can’t defeat 3 flying troops unless they actually focus on them 2: need a actual wiki or link to see the stats of all troops or buildings. This can help new players decide on who to side with. It seems like the rebels tend to be overpowered despite the empire having better funding, technology, and training canonically. 3: a.i rework, an at-st or any other troop can’t focus on an enemy hitting them unless they finish destroying whatever building caught their attention first. And why does the tie fighter strikes MISS a stationary jump pack rebel?
By FiteMeRust1v1

Could be good but it’s not.

So.. At a certain point you can’t even get enough credits to build anything because you will keep getting attacked. The devs want you to spend money for resources and protection... so you can finally get enough resources saved to build and upgrade.. Save your time and don’t play this trash. ‬
By devin7tm

I just want to make a quick review, I love the game a lot, but I think it would be cool is you make a game like this, but for the clone wars, which you can also choose different factions like the separatist alliance, the galactic republic, mandalorians, etc. I would absolutely love to see something like that!
By minecraftrb1

I have been playing this game for a week or so, and when I was looking through the different stuff you can make, and I saw there wasn’t any battle droids. Honestly, I love the battle droids, it be amazing if you could add them in. The game is really fun, I would suggest it.
By jdudjfjo

Reloading when you get 3 stars

I had to delete it

I had delete because it wasn’t working
By fort cat