Let’s join the LARGEST SPADES COMMUNITY in the world to play with millions of online players! Spades Plus offers you a great experience against many Spades players from all around the world! You can play in many different game modes such as Classic, Solo, Mirror and Whiz. Now playing Spades is much better with Tournaments, Knock-Out and many other different modes! Spades is one of the traditional trick-taking card games like Bid Whist, Hearts, Euchre & Canasta, but this game is played in pairs in which spades is always the trump. ==SPADES PLUS FEATURES== ● FREE COINS Get 20,000 Free Coins as a “Welcome Bonus”, and get even more coins by collecting your “Daily Bonus” every day! ● DIFFERENT MODES Play Spades however you want! CLASSIC: Make your bid with your partner and challenge other teams VIP: Play the classic Partnership Spades in custom Tables SOLO: There is no partnership. Each player gets his/her own points MIRROR: You bid the number of your Spades Cards in your hand WHIZ: You can bid “NIL” or the number of your Spades Cards in your hand ● TOURNAMENTS & CHALLENGES Win the 16 player-Tournament or Knock-Out Challenge to get amazing prizes! ● GREAT SOCIAL EXPERIENCE Meet new people and add them as friends to be their best partner or challenge them in games! Use Public or Private Chat to stay in touch with other players. ● CREATE YOUR OWN TABLES You can create tables in different modes. Choose your “Game Rule” type, set the “Bet Amount” and the “Final Point” or decide if there will be “Nil”, “Blind Nil” or “Chat” options. If you don’t want to be found, create your own “Private Table” where games are “Invite Only”. ● GET NEW DECKS Join the seasonal competitions to get new deck designs. Show your new decks to other users while playing against them! Additional information: *Make sure you have a good internet connection to get the best experience. *The game is free to play; however, in-app purchases are available for additional content and in-game currency. In-app purchases range from $0.99 to $99.99 USD. *Use of this application is governed by Zynga’s Terms of Service, found at www.zynga.com/legal/terms-of-service. Spades Plus has monthly Subscriptions that allow you unlock Emoji, Table Colors and Remaining Cards features unlimited and get additional game currencies every day. Prices are in United States dollars and will be converted to the local currency or your country of residence. Pricing and other subscription details are subject to change upon prior notice by Zynga. Account will be charged for renewal within 24-hours prior to the end of the current period, and identify the cost of the renewal. Additionally, auto-renewals may be turned off in your Device Settings after purchase. Your iTunes Account will be charged when the purchase is confirmed. Refunds will not be provided for the unused portion of any term. ©2017 Zynga Inc. 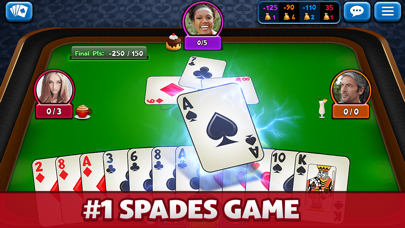 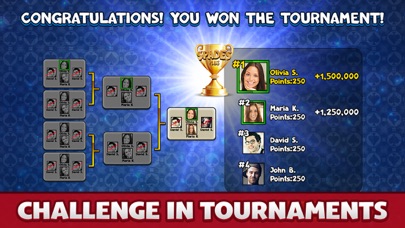 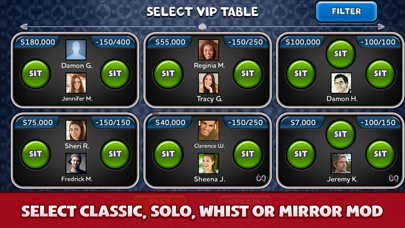 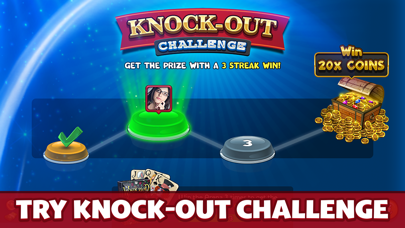 The game is nice but I don’t think there should be an option to leave the game in the middle of a round. I had a guy mad cuz I under bid by 2...sorry I usually don’t expect an 8 to take a trick, well, he got bad, bid double nil on next hand then bailed! Just wrong...
By Stacyisme

Up until this week whenever you would gift a contact/friend the $250.00 coins you could do it right in the spades app, now when you click to sent them coins it re-routes you thru Facebook, takes more time and quite frustrating as each donation opens a new tab. If you have a lot of friends it’s just ridiculous. Please don’t respond with contact you through the app as that is how I am contacting you!
By paoemao

I have a great time playing this game. You feel cool playing all levels game players and having good times playing it.
By Spotgirl39

Dealing is NOT believable

This game is better than most, but the way the cards are felt is ridiculous. You either get all the spades or not enough to bid high but one or two cards to not be able to bid zero. If you play regular classic spades if someone bids zero and their partner has 1 book, they will automatically win because the points are so low at 100. If they stay in the room together, they keep getting dealt cards in the same way and repeatedly win over and over. Then there are times when someone should obviously get zero but the cards are dealt so ridiculous the one time they should get zero, the other team is conveniently dealt every single card that would prevent someone from getting their nil. I’m sorry a person bidding nil should not be winning a book with a 4 or lower of spades repeatedly every single time they try to bid nil. It seems like a computer is definitely dealing and it shouldn’t feel like that.
By Bahachica12

This is a great app and is my favorite to use. But the amount of cheating that is allowed is ridiculous and is so blatant that the cheaters just continue to taunt because they know nothing will be done. These people are then trying to sell the coins back to players. What is done when a cheater is reported?? It’s really frustrating to the players that have been so loyal to your game. I played 4 games today and 2 of them were in Solo Spades and 2 out of the 4 games they were cheating. One bids zero the other covers. It’s very frustrating!! I also have reported and sent messages no response.
By Jodiespades

Nice game extremely fun. But people become petty and will go nil and leave the game knowing they don’t have it. Which causes you to lose. Or people deliberately throwing the game to get 100 points Frm a nil. It gets annoying but I’m still playing.
By gasbagg shawty

Uncanny bad luck of the draw.

I find it puzzling that I can get 8 to 10 unfortunate deals in a row. Therefore, requiring a parent to repeat play. I spent too much. Deleted game and stopped the bleeding.
By wheelycool

If you like Spade You’ll love this game. You can play with a partner or as a solo player against live players
By ChillMax1

I started off really liking this app. But that is quickly fading. I’m beginning to see people cheat by allowing the computer to play for them. Please come up with a way to stop this. It would also be nice to play with people on your level and to be able to play at any table you want, no matter how much money you have.
By Stasha D