**App Store Best of 2014** Escape to the world of farming, friends and fun! Go on farm adventures to collect rare goods and craft new recipes. Raise animals and grow your farm with friends. Join a farm Co-Op to trade and share or play on your own in Anonymous Mode. You can play FarmVille anytime, anywhere… even when not connected to the internet. Best of all, the world’s most popular farming game is free to play! ** ”FarmVille is back and this time, it’s portable!” – TIME ** ** “”Officially not just for Facebook anymore”” – Los Angeles Times ** ** “” They may have built the best FarmVille game of the series”” – Kotaku ** - CRAFT a variety of baked gourmet goods like classic country apple pies - HARVEST farm fresh crops of your favorite fruits and vegetables - CUSTOMIZE your own farm for charming country living - COLLECT hidden and rare items as you discover a new coastal farm - NURTURE and raise a wide variety of adorable animals like your very own farm dog - EXPLORE a new FarmVille story filled with special farm adventures - BUILD a lush family farm by the coast so all your friends can visit - GARDEN by the beautiful blue ocean as you decorate your farm with flowers and fresh produce - TRADE and chat with friends or play anonymously with people from all over the world - ESCAPE to the coast then connect to your Facebook farm to send free water - EARN daily rewards with the Mystery Chest and take a spin at the Prize Wheel” Additional information: • The game is free to play; however, in-app purchases are available for additional content and in-game currency. • Farmville offers subscriptions for in game currency. The subscription is billed monthly and automatically renews unless cancelled 24 hours before the end of current period. You can manage your subscription by going to your iTunes account settings after purchase. • Use of this application is governed by Zynga’s Terms of Service, found at www.zynga.com/legal/terms-of-service. • For information about how Zynga uses personal data, please read our privacy policy at http://www.zynga.com/privacy/policy. 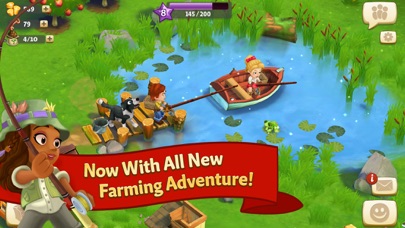 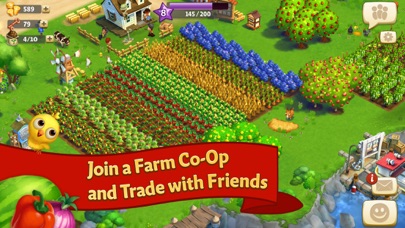 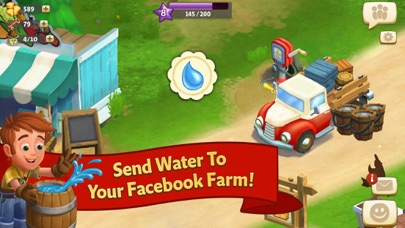 I have had on several occasions that it screws you out of items. I collected eggs to get sugar and when I got to my windmills my sugar was gone. I have spent a lot of money on this but if they are going to do that I’m done
By general45373

There’s a new event that seems to have started for some called Reindeer Tale. Several people got to start it early. Some got the event ans others like myself haven’t received it yet. How is that fair? How do those of us without the event yet have any chance of competing little lone finishing it.
By Di 225

hadn’t played in a while but when i logged back in, i was able to harvest crops & animals, but cannot water crops or feed animals. it shows i have food & water, but it won’t register watering and feeding.
By naughtyme88

Game is stuck with the new event and I can’t do anything!!
By Hcayh24675

I thought I would love the game, there is no ability to sale what you want to get the stars to move up. You are limited the nine picked the same ole ones when I have great stuff to sale for a lot of stars, making it frustrating so I have to sale for coins and no stars “no fair” I will most likely quit this game I don’t like being in a no win situation for a game that is suppose to be fun and relaxing for me to play. It takes too long to acquire property I have played for a long time and once had to start my levels over. I am at 42 it will take years to keep moving up I hate that I want to grow plant sale too many restrictions! And another thing they put food in the barn limiting my space food should not be in the count that is in the silo it is in both places. You could make this game more fun and enjoyable for those who don’t wish to play with others. The groups are mean I work I play when I have time so sometimes it’s not every day or week and they threw you out of the group ok but don’t punish because I wish to play at my on pace.
By hope you improve

Bring back FarmVille 1, please!!!
By ariemo95

Game bugged out at the beginning when you’re supposed to water your wheat and I can’t move forward.
By uauabs s

I really like the game and would love to give it 5 stars, but I can’t. I’m not on fb which makes it hard to get help. I signed up to be in a co-op, but it doesn’t seem to do anything. Lately my game has been glitching. Too many keys are required to get things and no way to collect the hundreds needed without spending real money. I refuse to do that anymore.
By wjkm918