The World’s Most Popular Mobile Word Game now has even more ways to play! Try new rewards and boosts to help you play smarter and faster! Words With Friends is the fun, free word game that lets you connect with friends and family while expanding your vocabulary and sharpening your wit. Test your brain power and spell your way to victory. May the Best Friend Win.™ Game Features: • WEEKLY CHALLENGE: Play the weekly challenge and earn fun, themed badges • BEAT THE CLOCK: Challenge friends to beat the clock in fast play! • SOLO PLAY: Play offline and sharpen your skills with solo play • HINDSIGHT: Uncover the best word you could have played after each turn • WORD RADAR: Heat map reveals the location of all possible moves before you take a turn • PROFILE FRAMES: Show off your unique style with custom profile frames • SMART MATCH: Connect with players of a similar skill with Smart Match • 6 LANGUAGES: Choose to play in Spanish, French, German, Italian, Brazilian Portuguese and British English *Play Words With Friends without third party ads between moves if you previously purchased Words With Friends Pro on iOS or any other mobile device. Be sure to login with Facebook or the email account you used to make the previous purchase to continue to play without third party ads between moves. Already an accomplished Wordie? Like us on Facebook or follow us on Twitter to stay up-to-date on game news, contests, polls and more. For more information, see our Terms of Service: https://www.zynga.com/legal/terms-of-service and Privacy Policy: https://www.zynga.com/privacy/policy" “The game is free to play; however, in-app purchases are available for additional content and in-game currency.” Just another title from Zynga’s Games With Friends™ 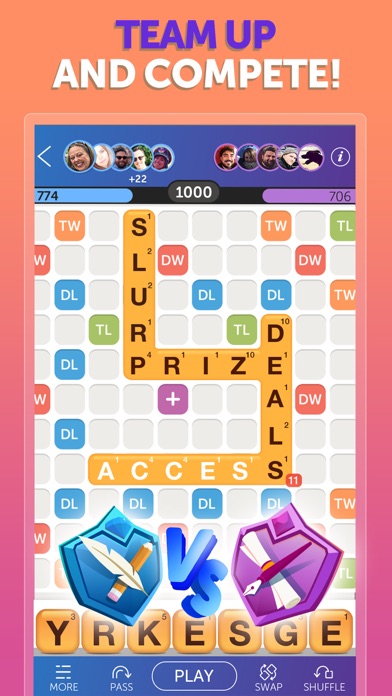 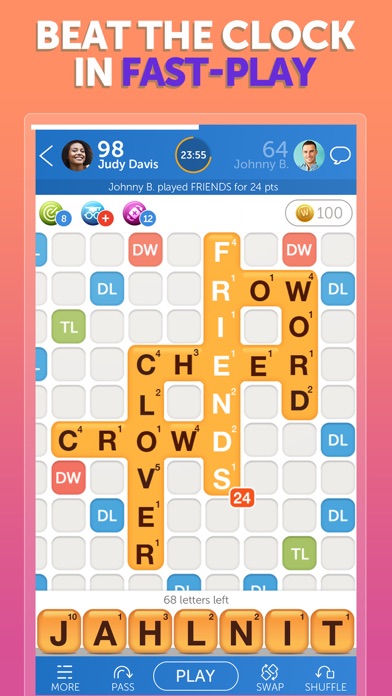 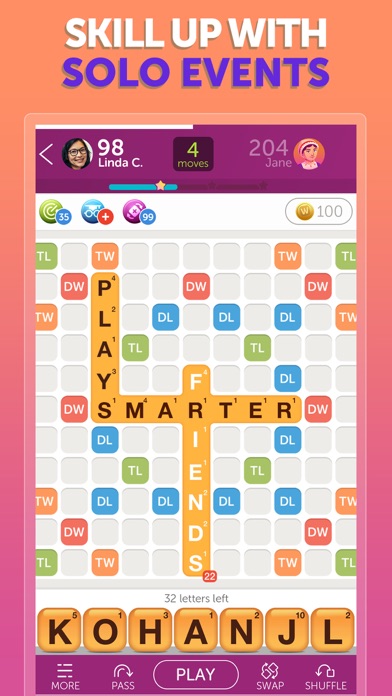 Normally very good with a few exceptions. When playing solo challenge games, words will be played that are valid but have no definition. These are words I’ve never heard of before. I seem to recall that in some games there have been three out of five such words played. How are these words submitted? Can I submit words that pop up as invalid for acceptance? How? There are huge numbers of words from different languages played in solo challenge games too. That’s good, but why are so many simple English words invalid? These are usually words that are easily found in dictionaries. Also, why are some proper names accepted and others not, for both people and places? Overall, very enjoyable.
By venniza

Too many bad features

The developers keep adding very annoying features to what used to be a great game. Most recently they changed gameplay to force you to make three or four gestures to play games with your real friends while pushing you to play robot game players and strangers. What possible good is that except to accelerate ad revenue and turn people off by inhibiting the thing you like most? Multiple tile colors makes it harder to play with no conceivable benefit, and extra time wasting animations for gifts that you can’t stop and just drive everyone crazy. It’s worse every month! At least they still have lightning round, about the only really great new feature I have seen on this platform. I bet they screw that one up too, they can’t stop themselves from making bad decisions!
By Zarkaland

The latest update to the game is horrible
By RaffyChek

But it keeps freezing my iPhone 11. Any ideas to fix this?
By Terieee

New update takes too much time putting opponent’s move on the board!

The solo challenge isn’t loading the the challenges anymore. Only two players to go and it quits. Has been stuck for days.
By Shock you

The only reason why I’m not giving it 5 stars is because it has WAY TOO MANY ads.
By J's Harley

While using the dictionary and you spell a word, even if you are right the dictionary will change what you put because they think they have a better word, it’s a terrible waste of our time.
By Hoodwinked77

Nice way to connect with friends and learn vocabulary.
By Smiles139

Getting frustrated,,,, Is this a “pickup” site now

Shoetastic I want to report these men who are trying to use the game as a pick up site. Saying hello is fine ,,, but leaving me info to go to other sites to talk and asking personal info ,,,, and if I don’t respond then they cancel the game ,,,, I can’t enjoy playing like I use to ,,,, now I’m concerned about who I accept a game with. HOW DO I MAKE IT 🛑 STOP ✋🏼
By Shae_sense