GPS Tracks for the Mac is one of the best apps for editing and creating routes on your Mac. Sync all of your saved tracks from GPS Tracks to the app for editing and reviewing. It's also perfect for editing GPX or KML files. Features - Sync - Sync all of your saved tracks and waypoints to and from GPS Tracks for IOS Create and Edit Routes and Tracks - Edit tracks created from GPS Tracks or imported from a file - Delete selected points from a track - Merge tracks - Split tracks - Cut a selected path from a current track to create a new track - Create routes to follow manually before you start your track - Create routes from a set of waypoints - View Track statistics - Export tracks to GPX, KML, KMZ, or CSV - Export multiple tracks into one file Create and Edit Waypoints - Add or edit waypoints saved to the app - Create waypoints from map searches - Customize each waypoint with a pin color - Convert between four sets of coordinates (Decimal, DMS, MGRS, UTM) anytime - Add MGRS Grid overlay to map View Tracks - View and replay saved tracks - View interactive statistical graph for each track - View each waypoint saved with each track GPS Tracks Pro (Auto-Renewing Yearly Subscription In-App Purchase) • Use Mapbox maps, USGS, NOAA nautical charts, FAA charts, and many other alternate map sources • Save maps for offline use • Print Maps • Use custom Map Tile Server URLs • Subscription syncs via iCloud to other devices GPS Tracks Pro Subscriptions Available: 1-year subscription - $19.99 (automatically renewed until canceled) SUBSCRIBERS’ AUTOMATIC-RENEWAL FEATURE: Your subscription will be charged to your iTunes account at confirmation of purchase and will automatically renew unless auto-renew is turned off at least 24-hours before the end of your current period. Your iTunes account will automatically be charged at the same price for renewal, as stated above, within 24-hours prior to the end of the current period. Current subscribers may not be canceled during the active subscription period, but you can manage your subscription and/or turn off auto-renewal by visiting your iTunes Account Settings after purchase. Privacy Policy and Terms of Use - http://www.dmsoftwaresolutions.com/privacyPolicyTermsOfUse.html 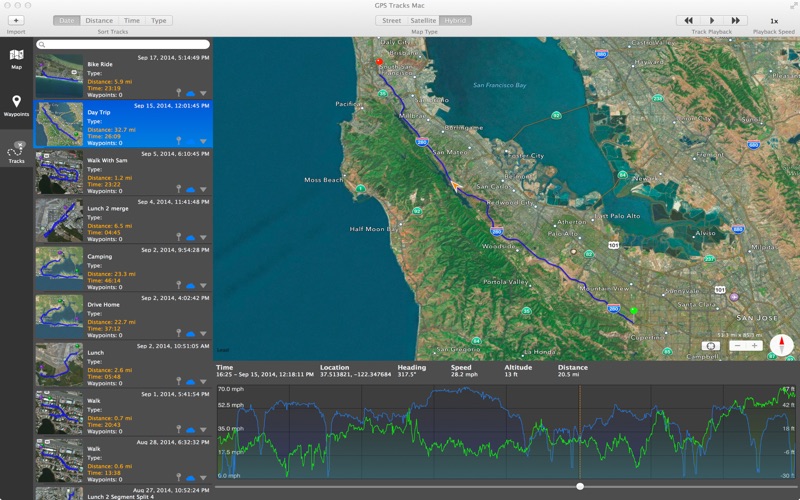 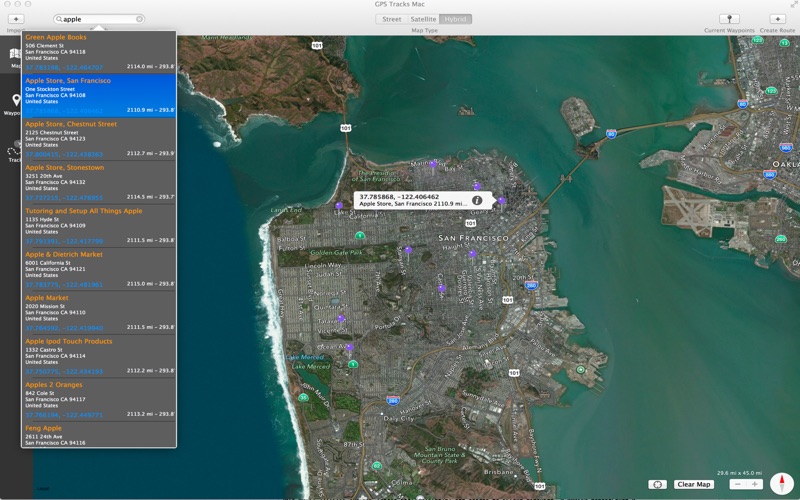 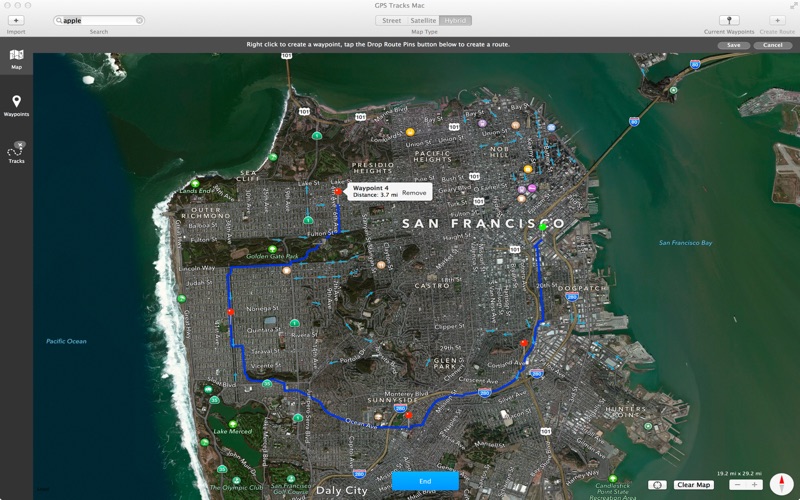 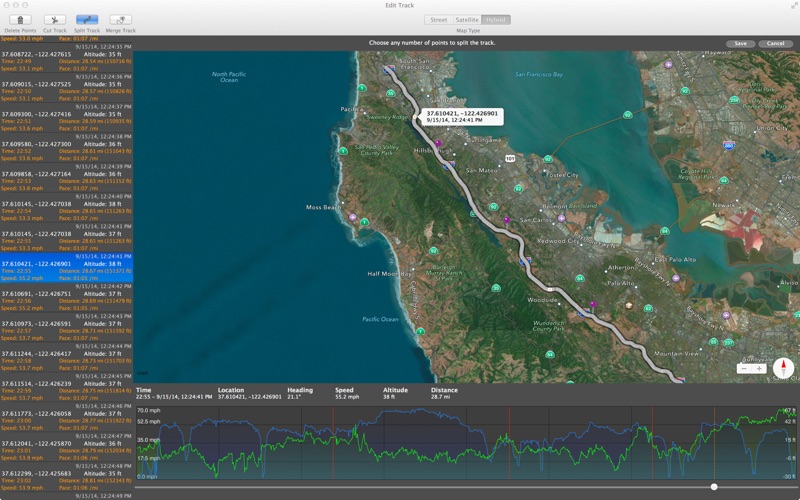 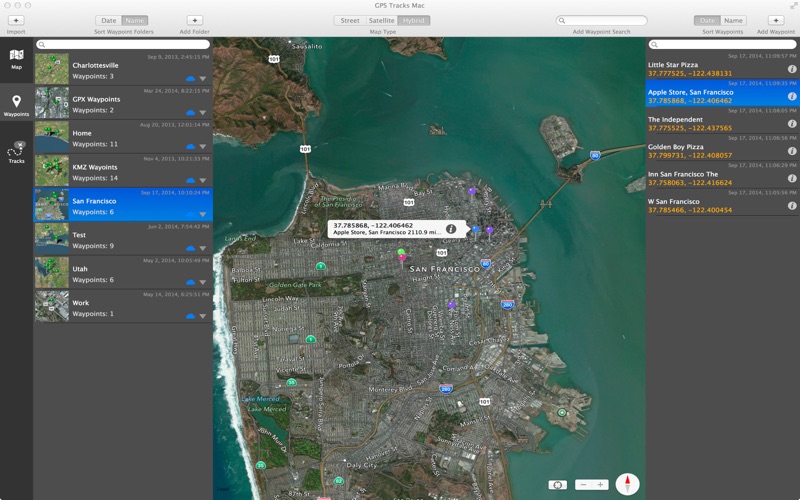 Very hard to use and does not do anything useful.
By TexasHand

Nice App For Tracing my Routes

I've been using GPS Tracks for fairly simple tracing of my routes, Walking, Segway, Biking now for about 3 years. I started with the iPhone App because it synchronized routes with my Mac which I prefer for planning and review of my trips. I've only used the Watch App a couple time, usually just stick with my phone when I'm out, but will likely use it more if I get a bigger phone I sill run a nice small original SE as my phone and 11 Pro Max for camera. I was in contact with the developer a fair bit in the early days helping work through some bugs, and he was very responsive as the Mac went though different syncing implementations as Apple changed things. Mac interface still has a few glitches, but they are more cosmetic annoyances that can be worked around. I did loose some of my early tracks which was sad, the tracks were bad and as the apps developed and improved their capture and recoding, they stopped loading some of my earlier tracks that had bugs. I saved some with export and import, but lost some others. I have pretty simple needs, but I'm very happy with this App on the phone and Mac. I have the other major GPS apps as well, but don't really need their capabilities yet, and their interfaces seem a bit too complext where as this one I find has a few stange quirks in it's interface. I've not signed up for the Pro version, as I don't find for the level of use I have of about 1-2 tracks a week during 60% of the year is enough to justify it, but I'm increasing usage so I may look into that. So overall I'm 5-stars happy, an 4 starts for the Mac App!
By LateApp

This app is frustrating to say the lesst. Let me see if I can put this into words. I have GPS coordinates. I want to enter them in as an added waypoint. This app completes doesn't give any feedback that I am doing that at all. When I enter way point data, it would be a WORLD betterr, if when doing this, YOU SHOWED ME SOMETHING that says I've done it. There is a place that says WAYPOINTS and every time I enter the data there is NOTHING that says, YOU DID IT, or HERE IT IS ON THE WAP. I hit SAVE and nothing happens. The field is empty. I hit save several times, and then notice that I have 12 saved waypoints. One for each time I pressed SAVE thinking SOMETHING would happen. Then I have to say, add waypoiint to map. Guys??? What are thinking? Here is how ANYONE would GUESS this should work. I enter data, I see it on the map, instantly, showing me what I am doing. When I press save, it should say, NEW WAYPOINT SAVED, or ANYTHING. Tell me I am doing something.... Make adding a way point easier. There are apps that give me a text message with coordinates and I want to see where that is. But this app is just disconnected from ANYONE who's never used it before. The point of a GUI is to allow the user to intuit how do something. Go ahead, give anyone coordinates and ask them to make a pin on the map in this app and watch them fumble around forever trying to figure this thing out. 5 starts and I would use this all the time if YOU JUST MADE IT SIMPLE. It did work, and I guess I get it now. Still, it feels broken even though it does work. It doesn't work in an intuitive way.
By Alex Alexzander

Useful if you don’t want to get of roads

This app should state clearly that there is no topo view and that it is not suitable for hiking. Agree it is a perfectly reasonable app for a laptop to see where you are in your car. It would also be fine to see where you’ve gone assuming you already had a trail you were following and were willing to lug your macbook air along so you see your route on a satillite picture, but as a way to discover hiking trails on your lap top that apps such as Gaia GPS do so beautifully for a device that fits in your pocket, GPS tracks is a let down.
By Til Eulenspiegel

I don’t write reviews often but I wanted to share my thoughts on this app. I have enjoyed using this app from the moment I downloaded it and have not regretted the download yet. I love the syncing this app has with iCloud and how you can see your tracks on the Mac from your iPhone or Apple Watch. I don’t use a lot of the advanced features of the app but for what I use it for, there is nothing better. All of the hiking I do or any of the vacations I take are recorded in this app. I also want to comment on the developer, David. I rarely experience better support than what he provides. David is quick in his responses and demonstrates a true desire for users to love his app. I believe that his focus is for a great customer experience from using the app to interacting with him. A specific scenario came up recently where David worked with me to resolve an issue that I had experienced. He was encouraging throughout and did not make me feel like I was an inconvenience. I will admit that I paid the $19.99 subscription, not because I wanted all of the stuff that came with it but because I wanted to support David and his efforts to continue to put a quality product out there. You won’t find an app much better than this one in my opinion.
By lbouyet

The app works like a cham and is extremely helpful, especially when you can move from your iPhone to your laptop without missing anything. And David is terrific with his customer service! He makes sure your concerns are addressed completely and promptly!
By 1000Js

Wasted $20 on this app. Doesn’t do what the iOS version can do. You can take the time to INDIVIDUALLY show your tracks on the map but once you close the app and reopen it they are gone! The iPhone app keeps them on the map. The iPhone version allows you to post all of your tracks to the map with one tap!
By TKKT

Didn’t encounter the bugginess reported by previous reviewer. Easy to use. Worked very well with files generated by GPS Tracks Also imported .gpx files generated a year ago from GeoTagPhoto (another gps iPhone/iPad app) and worked well. Editing files to eliminate stray gps reads was very intuitive. Using DropBox to push files from iPhone and iPad to my Mac was seamless. One of the best features was the ability to visualize the route history showing, location, speed, altitude, waypoints. in a graphic form Was able to import files into LightRoom CC very easily for image geocoding Would buy this again.
By jovogt

I’ve been using the iOS version successfully, but just bought and tried the OS X version on OS X 10.9 - buggy as heck with the GPX files I exported from the iOS version. I’m trying to figure out how to get a refund - this is not good.
By Napstore

Didn't do what I needed

I'm looking for a Mac program that will allow me to take a pre-recorded track, display it and create a "clean" track over it for sharing. I was not able to figure out how to use this software to create a new track or add new points to an existing track. You can remove points and split tracks, but it apparently does not allow you to click on the map to add new points to a track. When I went to the support site, there was only support offered for iPad and iPhone apps. Think carefully before purchasing.
By James_a_white