Hotspot Shield is the world’s fastest and most secure VPN app. Protect yourself from cyber threats with a simple click. Now you can browse, stream and game while staying safe and private online. With your Hotspot Shield Premium subscription, you get access to a security suite of top security apps. Hotspot Shield Premium includes: ► ROBO SHIELD - SPAM CALL BLOCKER Stop annoying robocalls from spamming your phone, and stay safe from scammers trying to steal your personal information. ► 1PASSWORD - PASSWORD MANAGER Keep your passwords safe across multiple devices from hackers trying to access your accounts. ► IDENTITY GUARD - IDENTITY THEFT PROTECTION Safeguard your digital and financial identity from the constant risk of theft and fraud. ► HOTSPOT SHIELD - PREMIUM VPN ACCESS Access the fastest VPN servers and secure your internet privacy with our patented technology. Hotspot Shield VPN Features: ► FASTEST VPN SERVERS Connect to the fastest VPN servers in over 115+ locations to keep your internet connection protected from cybercriminals. ► SECURE VPN CONNECTION Protect your privacy by connecting to our fully owned VPN servers, or upgrade to our Premium subscription for more features. ► PATENTED VPN TECHNOLOGY Get the VPN with over 30 patents that optimize your server connection for faster speeds and stronger security. ► BROWSE SECURELY Stay secure with military-grade encrypted traffic between your device and our servers while connected with Hotspot Shield VPN. ► STAY PRIVATE Your privacy is our mission. Connect to any of our reliable VPN servers, and know that we do not keep any logs of your activity. ► NO REGISTRATION REQUIRED Use all the basic features of the app without having to sign up, register, or enter your credit card. ► SECURITY SUITE INCLUDED Get premium access to top security products with your Hotspot Shield Premium account at no additional cost. See why millions of users trust Hotspot Shield for their mobile security - Get it today! ■ Hotspot Shield VPN Premium service includes: - Free access to RoboShield, Identity Guard, and 1Password. - 7-day free trial: free of charge; no commitment; cancel anytime. - Payment will be charged to your iTunes account at confirmation of purchase. - Subscription automatically renews unless auto-renew is turned off at least 24-hours before the end of the trial period. - Length of subscription: one year; one month. - Account will be charged for renewal within 24-hours prior to the end of the current period, and identify the cost of the renewal. - Price of subscription: one-year plan: $7.99/mo; monthly plan: $12.99/mo. - Subscriptions may be managed by the user and auto-renewal may be turned off by going to the user's Account Settings after purchase. - No cancellation of the current subscription is allowed during the active subscription period. - Any unused portion of a free trial period, if offered, will be forfeited when the user purchases a subscription. ■ Hotspot Shield VPN is powered by Aura: Aura believes in placing consumers in control of their personal information online. Aura provides millions of users with mobile security and privacy through all of its security products. Privacy Policy: https://aura.com/privacy-policy Terms of Service: https://www.hotspotshield.com/terms/ Support: https://support.hotspotshield.com/ Copyright © 2020 Aura Inc. All Rights Reserved. 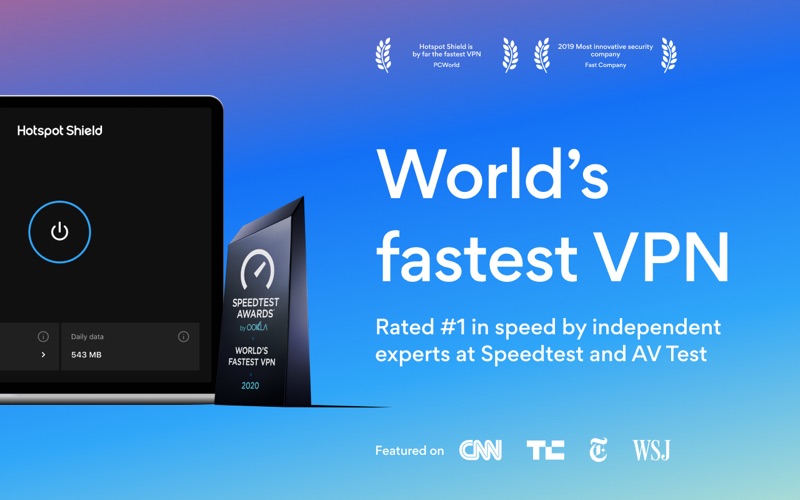 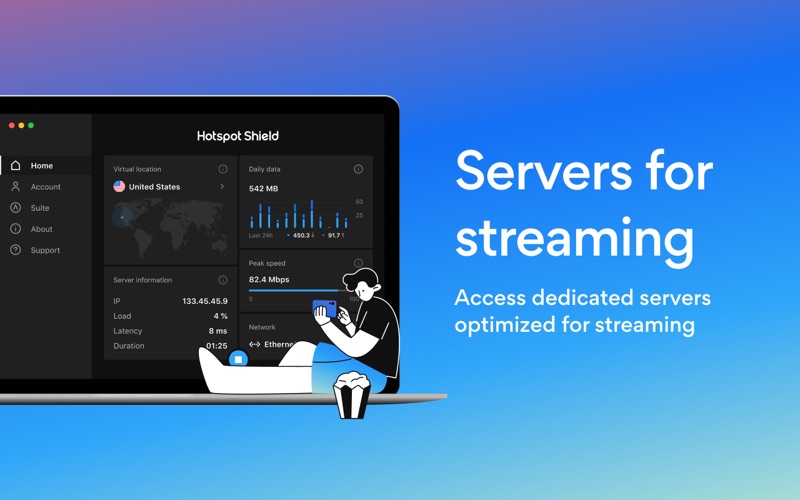 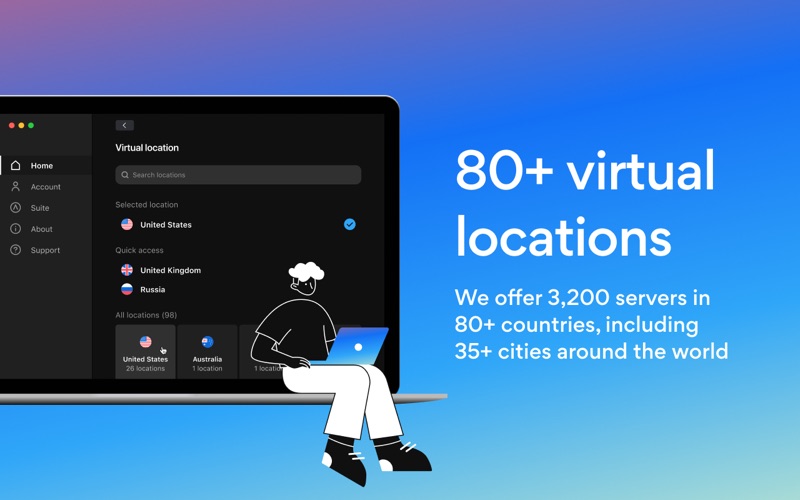 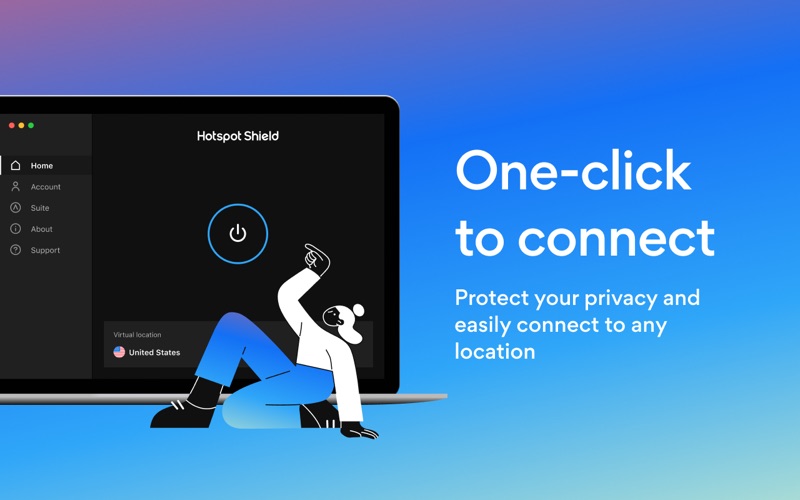 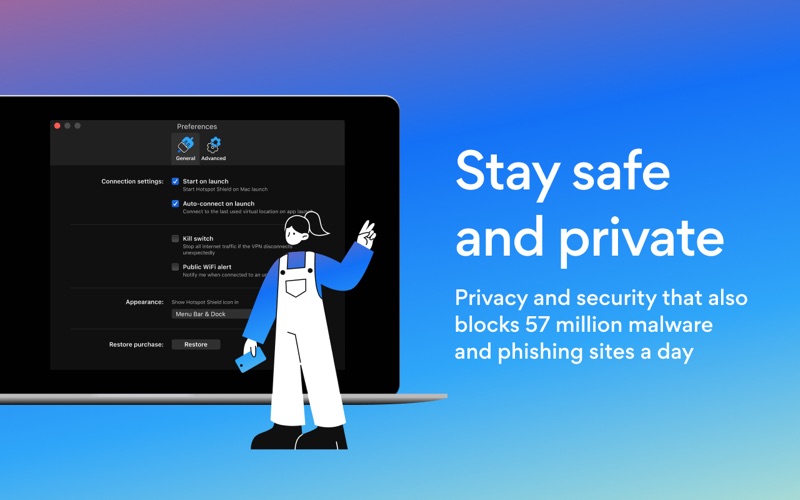 Worst app ever. Banned me from a minecraft server.

I downloaded this app to bypass my school Wifi firewall on multiplayer games, so I could play some minecraft. I only play during study hall, when it is 100% allowed to play games and do whatever you want, so there was no harm in me doing this. I activated the VPN, and joined Hypixel. It wasnt even a second before I was perm banned from playing on the server ever again, and I have no other option other than making a new account to play on the server again. This might be Hypixel's fault however, and their cheat detection may be flawed, but I had used other VPN services, such as X-VPN, and had no problems. To anyone who plays Minecraft that reading this, never download this app!
By DCIfan103

I switched from another VPN service and was extremley disappointed. Many of the public sites I regularly use blocked me from access until I disabled the VPN. This is specfic to Hotspot shield. Worse, the company advertises a 30 day satisfaction guarentee, but when I contacted customer service and asked for a refund due to the above, I was refused. I paid over a hundred dollars and it was a total loss. Went with a Cisco VPn and not having any issues now. Definitely don't recommend if you're looking for everyday privacy. I suspect this product is more for those using less trusted and secure sites (dark web, torrents, illicit content, etc.) otherwise its a total waste of money.
By heyimrhonda

fast easy to use no intruption at all you can trust it 😍😍
By b.kazemi

Best VPN I have ever used. It is consistently up to par
By htevhy

the best vpn
By alabarox

So far so good.
By Aajohan

A Little Expensive, but Works Quite Well

This app has many servers in many countries. It doesn’t slow down my speed at all, and I’m able to use it on five devices simultaneously, so I always have it running on my home Mac, my iPad, and iPhone, as well as my travel laptop and my wife’s iPad. It connects seamlessly through virtually every server or hotspot we come in contact with, and just works. I’d like to see a lower price for multiyear purchases like other VPNs have, that would entice me to stay with Hotspot Shield Elite longer. You do have to cancel the service before your renewal date comes up or they will automatically renew your plan on your credit card, but that’s on you. I’ve had nothing but good luck with the app, though. I’m also having trouble getting my home computer to automatically login to Hotspot Shield Elite whenever it restarts, but I’m working on figuring that problem out. 02/2021: I've had so many problems with my account. It keeps forgetting my password, then when I try to change or update it, it wants me to resubscribe and start a whole new account! I'm just about fed up.
By DrDave72