Wake up and go to sleep to your favorite music, never sleep through your alarm again, get your own collection of exclusive designer clocks, know weather conditions in your area, countdown to important events, cook or work out with a multifunctional timer, and light up the darkness with a powerful built-in flashlight! FEATURES: * Choose from stylish designer themes for the clock: Ultrasonic, Digital (Blue, Green, Red, and Yellow), Wordy, ThinLine * Create your own wake-up playlist with the best music * Background alarm support: alarm will ring even if the app is not running * Choose a way to stop the alarm: shake your device or solve a math problem * Go to sleep to your favorite songs or white noise * Check live weather conditions and temperature * Change the screen brightness so that it doesn’t blind you after a good night’s sleep * Shake your device or double tap on the screen to switch on the flashlight * Convenient app settings. Get easy access to any option you need * Widget: access the remaining time till the next alarm and live local weather conditions in Notification Center. Alarm Clock for Me provides the functionality of 6 indispensable apps in 1: ALARM - Wake up to your favorite music - Shake your device or solve a math problem to turn off the alarm - Set multiple alarms with different tunes - Background alarm support: alarm will go off even if the app is not running! - Easy access to the nearest alarm from the main screen - Huge Snooze/Stop alarm buttons - Add your notes to the alarm! - Adjustable volume of Sounds/Music - Vibrate / Fade in / Snooze options - Shake-to-snooze when alarm goes off CLOCK - Exclusive designer clocks - Vertical and horizontal modes - 12 or 24 time format - Show/Hide seconds - Show/Hide day of the week - Auto-Lock when plugged in ON/OFF - Auto-Lock when on battery ON/OFF - Customizable auto-lock time SLEEP TIMER -Use the shortcut on the main screen to go directly to the sleep timer settings - Create your own playlist with your favorite songs - Shuffle music ON/OFF - Adjust the volume of Music/Sounds - Go to sleep to white noise WEATHER - Check live weather conditions and temperature - Automatic detection of your current location and weather conditions display in your area - Weather conditions and temperature in any location you choose - Temperature unit: Fahrenheit/Celsius - Show Weather ON/OFF COUNTDOWN - Never miss important events and special occasions. Count down to your vacation, anniversary, graduation and more TIMER - No matter whether you are cooking or working out, multifunctional timer will always be at hand! FLASHLIGHT - Shake your device or double tap on the screen to switch on the flashlight Beautiful. Reliable. Versatile. Get the alarm clock that you've been looking for! For complete access to all Alarm Clock for Me features, you will need to allow access to the following: *Notifications – otherwise, alarm will not ring; *Location data to provide you with the weather forecast for your exact location; *Media library so that you can set your own music as an alarm or a sleep timer sound; *Camera to activate a powerful built-in flashlight; *Photos to give you a possibility to set them as countdown pictures. Privacy Policy: http://apalon.com/privacy_policy.html EULA: http://www.apalon.com/terms_of_use.html 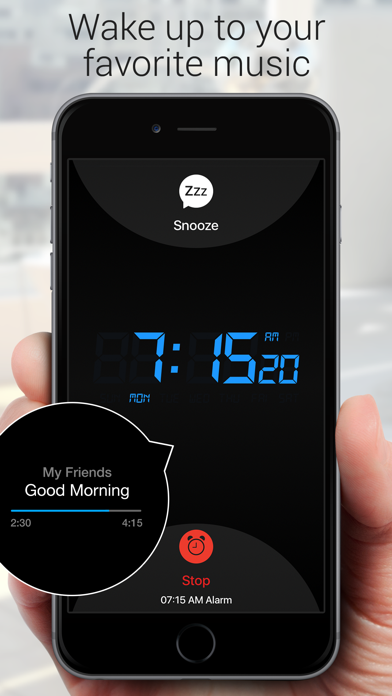 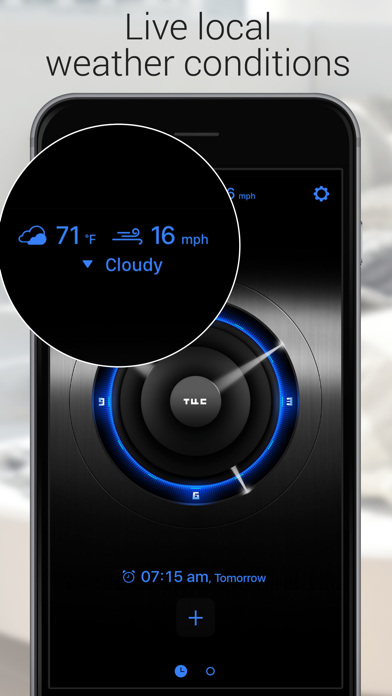 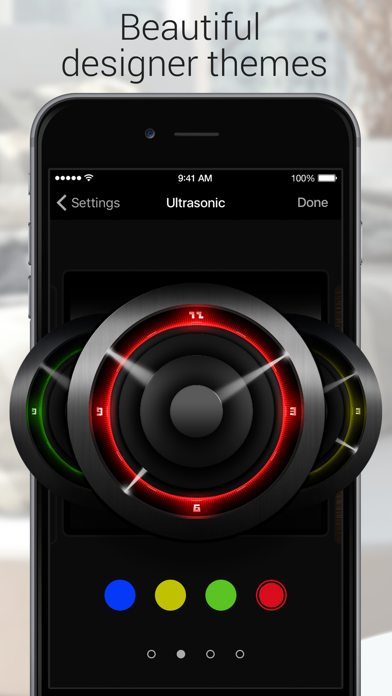 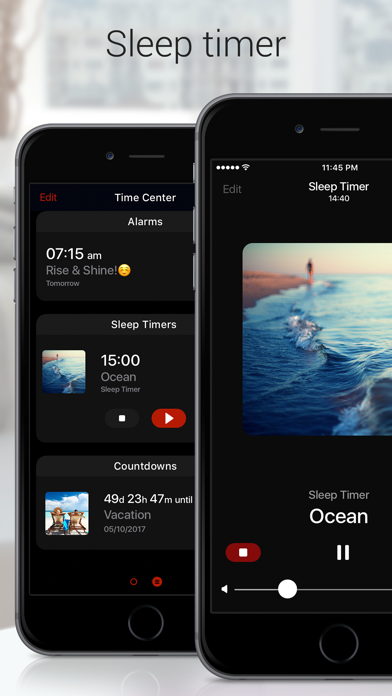 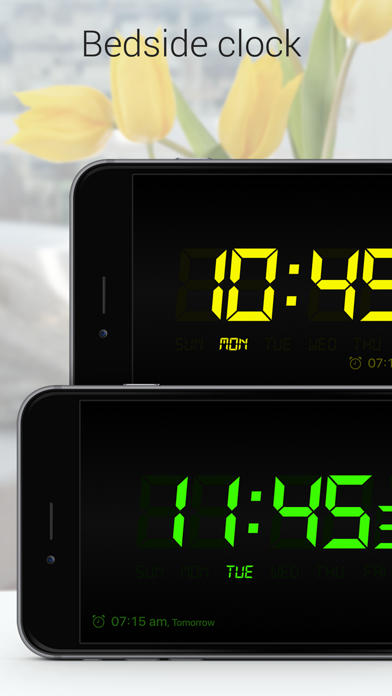 Used to be GREAT!!

As another reviewer mentioned, since the last Apple update, app WILL NOT play Apple Music!! It goes to the default sounds .... I DID NOT purchase to HEAR default sounds! Also, WHY is the LAST “PAID” app update 2 YEARS AGO & the FREE app 2 MONTHS AGO?!?!?! You would think that the PAYING customers would get updates also!!!!!!
By SLF1384

After the most apple recent update, this defaults to the built-in tracks. I want listen to the music that I have set up with the alarms. Very disappointed. It happened with iPhone and iPad.
By slbenz

Two problems: 1) sometimes it shows a black screen and doesn’t go anywhere. 2) very disappointing that it won’t work unless you set the silence mode to off. This is really a dealbreaker because I always leave my phone on silent mode, just vibrating when I receive messages. Besides, Apple’s Clock app works on silent mode, just as if it weren’t on silent mode.
By WMaxsen

Just what I need!

From turning off alarm unknowingly to snoozing 3,4,5 times to incorporating alarm into my dream and sleeping through it til the alarm “freezes” and sound turns off, I’ve done it all my entire life and continue doing so at 54 years of age. This app has the potential to be life changing! My only fear is there currently aren’t enough different obnoxious sounds for the app to work for me long term. The phone shake and math problem features are great. My only suggestion to the developer is to increase the size of the obnoxious sound library because when a sound becomes too familiar and no longer wakes me, the shake and math features become irrelevant. Thank you!
By selbytunes

Good but pop ups are obtrusive even in paid version

Good app except when I turn off cellular data in settings please respect that. A bright white pop up in the middle of the night forcing me to open settings or turn cellular data back on is rude. If it’s off and you can’t get internet data, then do without until you can. Persistent notifications about leaving it running are annoying too. Tell me and give me the option to turn the notification off.
By Randy Joe Bob

Enjoy knowing what time it is to the second. Helps me regulate the clocks I’ve restored.
By Alberto Jr, Horologist

I almost never pay for apps just to get rid of ads, but these were extremely annoying. I paid still ads even after a reboot. If not rectified I will be contacting someone for a refund.
By Vbjhghdfgdfgdgfsrtse

Like everything but do want 12/24 he option. Cannot find this in settings but it is advertised.
By rvftiey

I love this app. It is just what I was looking for (for the most part). I wanted an app that would play my songs on wake up. Apple has some hurdles to make that difficult, but this app mostly does it. My only wish is that the developers would make it possible to just select a playlist instead of only a song. There is a random song option, but as far as I can tell it’s not playlist specific. Update Edit: Problem Solved! After posting the comment below this update I began testing the alarm previews again and I realized that there was a several second delay between when the alarm would technically start and any sound would begin playing. I realized that it seemed as though the app was trying to tell the Apple music player to play my chosen song, but it wasn’t working so the app was then defaulting to one of its native songs, Mountain in this case. This was well designed. Better it does that than not play anything because the Apple Music app doesn’t want to work. So I then did a shut down and restart of my phone and now the alarm preview is playing the correct songs from my library again. I’m glad I caught that quickly and fixed it before I got too busy with life to get around to updating this review. I would still like to be able to select an entire playlist though 😉. I’m going to leave the below description of the problem that I was having in case anyone else has a similar problem. I have an iPhone 6. ———Original Comment Problem: However, lately (the past couple of weeks maybe) it doesn’t matter what song I select, the app is only playing the included Mountain alarm. For several days I had been thinking that I was just messing something up in the app such as locking the phone as I fumbled with it to hit the snooze buttons. But last night I set my phone up clear across the room, with the Bluetooth speaker next to my pillow and it still only played Mountain. I just now did numerous alarm previews adjusting the settings and saving and resaving the alarm and it will still only previewed Mountain. Don’t get me wrong, Mountain is a good tune, but it doesn’t pull me out of a deep sleep like I need it to. I need randomness to wake me up most days. I actually usually have speeches and interviews set as my alarm songs because the voices both wake me up and can prime my brain for the day. I barely woke up 8 minutes before my Zoom Church leadership meeting this morning even though my alarm was set for an hour earlier. I woke to the repetitive rhythm of Mountain 42 minutes later than I should have. This is very frustrating. Again, this is an awesome app, but why is it doing this?———-
By tanner77