Google Play Movies & TV syncs movies and TV shows from your Google Play account so you can watch them on an iOS device, on any HDTV using Chromecast, or on Apple TV using AirPlay. In-app purchase is not supported, so sign in to Google Play online. Open Google Play Movies & TV, then search for movies and shows, and manage your wishlist and library. Download and watch from anywhere, even when not connected. When you sign up for Google Play Family Library, you and up to 5 family members can share movies, TV shows, and more across devices. Permissions Notice Microphone - Needed to receive a sign in code from a nearby living room device when using the ‘Enable TV-viewing’ functionality. 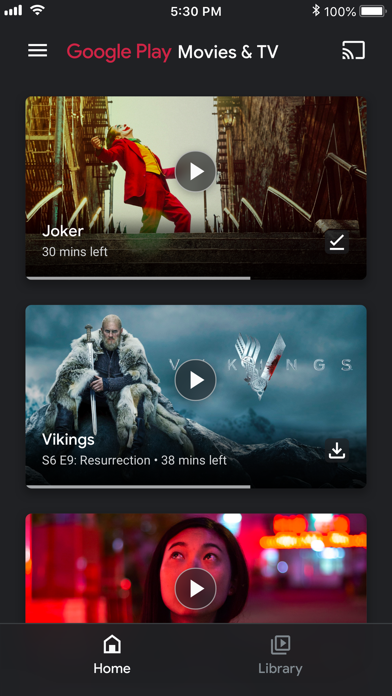 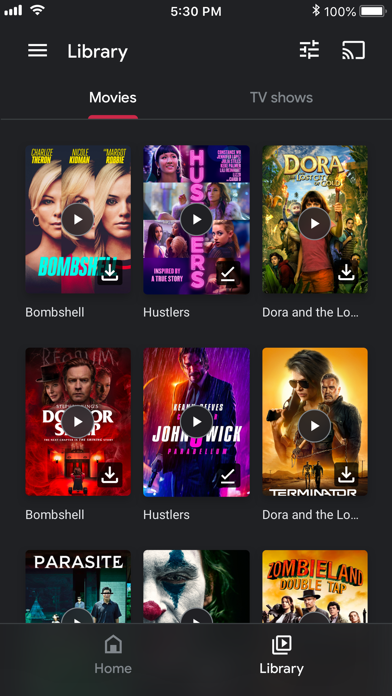 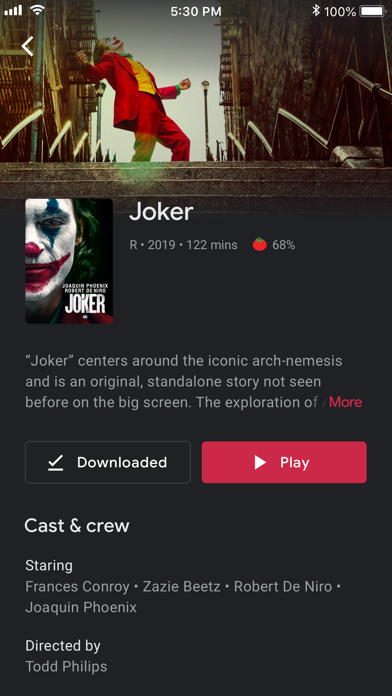 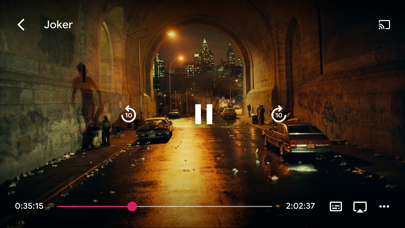 You would think that one of the most successful companies that have EVER existed would hire competent people to create an app that is stable, user-friendly and aesthetically appealing... This app is none of those things. Quite the opposite. There is literally no reason to use this because the videos you paid good money for will be unwatchable. Apple is more expensive, but at least it looks great and does everything it’s supposed to do. It’s beyond mediocre that a company worth billions can’t build a team capable of delivering even just PLAYABLE content. Someone needs to be fired. 😒
By Cammiboe

Update this stupid piece of crap

Garbo, I can’t even download movies for offline viewing when I go traveling.
By johnnie pi

I rented a Harry Potter movie and worked fine for the first hour and a half. Then it kept glitching, pausing, skipping, and muting. Very frustrated and unhappy with my money spent
By a teen who needs help

Works terribly awful on apple devices. Always getting a constant error message. Guess it’s there way of trying to get you to switch over to android devices. A lot of movies I paid money for and can’t watch. You guys already screwed up play music and now this? Show some mercy for gods sake. Just download Disney plus cause this ain’t worth it.
By RyGuyDaMan

For a Google product I would expect to have an almost perfect app. Google play has given me countless issues since I’ve downloaded. I purchased multiple seasons of different shows being aired presently and the app does not download/ provide each episode ina timely manner. I’ve waited up to 2 weeks before getting to watch a show I previously paid for. From my understanding you are able to stream content the day after it is released on network. This is not the case. I’ve found new episodes of shows that I’ve purchased in advance on YouTube, which are FREE... definitely not giving money to google anymore for media content, it’s false advertising and a bit of a scam if you ask me.
By instagurl31

Where Do I Begin doh?

I don’t even know where to begin I have tried many times over the last month or two and I haven’t been able to play any of the movies that I have purchased on this player that you have provided us. I am trying to find a way to continue using Google play as my main source of movie watching but it becomes more and more impossible when you keep getting a replay error within two minutes of watching the movie I purchased the movie I can’t even watch it so it tells me maybe you could try it over in YouTube tried it it doesn’t even show up as purchased as it supposed to so what am I supposed to do fix this problem
By MistressFeral

I don’t think it needs a star

App flat out no longer works. I can’t stream or download anything, have restarted app, redone loaded app, etc. Dozens of movies and tv shows now useless.
By idontwanttouseanickname12345

After purchasing a few tv shows, the app randomly shuts down when I try to play any episode. I can watch movies on it perfectly, but the app crashes when I hit the “Shows” feature. I’d rather buy from Amazon
By Shary87262574$383