VPN Unlimited is free to download and try for 7 days. Nowadays, Privacy is a Luxury! Whenever we pay our bills, manage our bank accounts, or log in to our favorite social networks, our credentials, account numbers, billing address, and other private data may end up in the crosshairs of identity thieves. Trust your security and privacy to professionals - KeepSolid VPN Unlimited! ===== KeepSolid VPN Unlimited features: WEB PRIVACY Keep your internet activities anonymous and untraceable wherever you are. Zero-log policy, traffic encryption, IP and DNS masking. These all mean that third parties are not able to monitor you any longer, and that your privacy is reliably secured from obtrusive website and ISP surveillance. UNLIMITED ACCESS Our high-speed VPN servers in 80+ locations all over the globe, as well as our enhanced KeepSolid Wise technology, allow you to freely surf the web without giving out a single piece of your personal information, including your current location. Don’t let websites discriminate you based on the way you surf the internet or the place you browse it from. TOTAL SECURITY KeepSolid VPN Unlimited offers a variety of VPN protocols, each with unique capabilities and strengths. Just choose the one you would like to try. For instance: OpenVPN - an extremely secure and highly configurable protocol that uses a wide range of encryption algorithms (including AES-256). IKEv2 - a secure and easy-to-setup protocol that can effectively change networks and re-establish VPN connection if it was temporarily lost. It provides a significantly higher connection speed and a better performance. WireGuard - cutting-edge VPN protocol that offers the highest levels of security and fastest connection. DNS FIREWALL To help you avoid malware infection, KeepSolid VPN Unlimited provides you with the DNS Firewall feature. This bulletproof solution intercepts DNS resolution, safeguards your online activities, and protects your iPhone from malware. To top it off, this feature allows you to block phishing sites and sites with inappropriate content. ===== What others say * "Good performance levels and tempting pricing make this smartly designed VPN offering one that should definitely be on your shortlist." – Techradar * "If I had to bet one florin on the future of VPN services, it definitely would aim of this service." – Wired * "VPN Unlimited offer one of the sexiest bespoke VPN clients I’ve come across thus far." – BestVPN ===== 24/7 Customer support If you ever happen to encounter any issues or have any questions, contact our friendly customer support accessible from the KeepSolid VPN Unlimited app, your personal cabinet, and the Support page on our website. Our knowledgeable team would be happy to offer their help. ===== We offer three recurring subscription options: - 7 days - 1 Month - 3 months - 1 Year ===== - Payment will be charged to iTunes Account at confirmation of purchase. - Subscription automatically renews unless auto-renew is turned off at least 24-hours before the end of the current period. - Account will be charged for renewal within 24-hours prior to the end of the current period, and identify the cost of the renewal. - Subscriptions may be managed by the user and auto-renewal may be turned off by going to the user’s Account Settings after purchase. - Any unused portion of a free trial period, if offered, will be forfeited when the user purchases a subscription to that publication, where applicable. Disclaimer: We have had reports that our VPN service and domain vpnunlimitedapp.com might be blocked in the countries listed below: - China - UAE - Saudi Arabia - Iraq - Iran - Turkmenistan - Turkey While we can’t say that it’s totally impossible to connect in the mentioned locations, there are a few challenges to overcome. https://www.keepsolid.com/privacy-policy https://www.keepsolid.com/eua 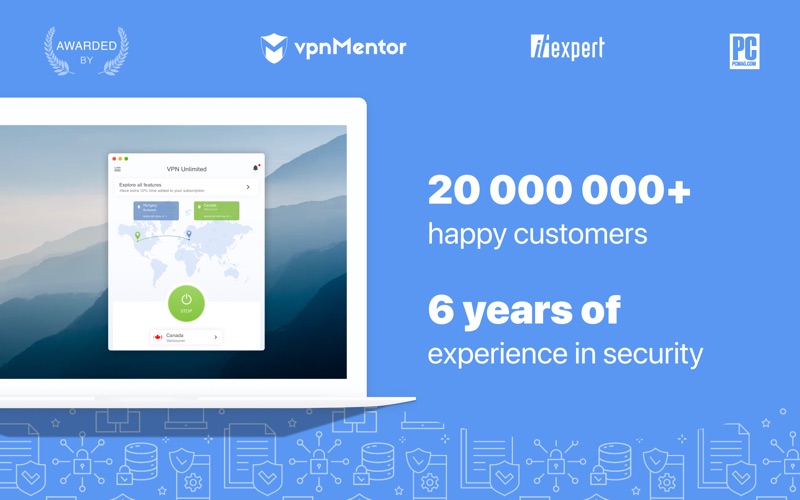 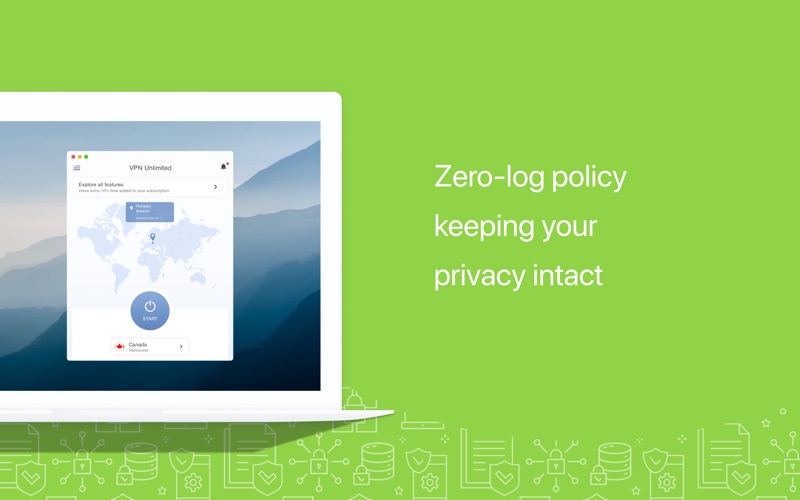 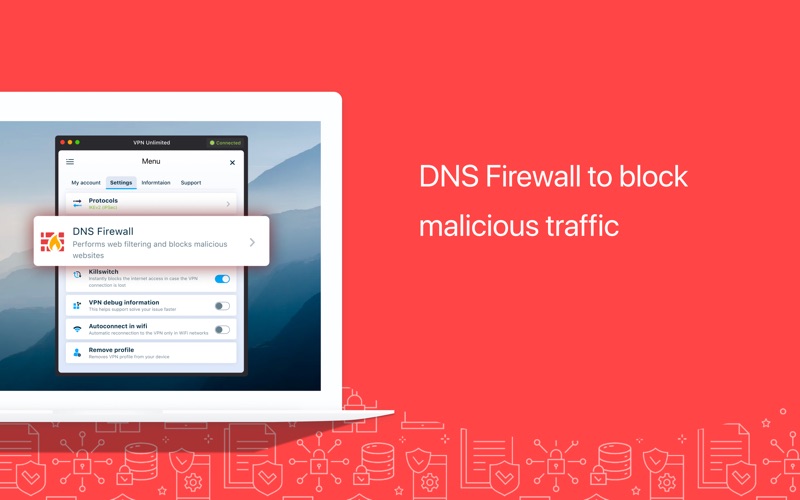 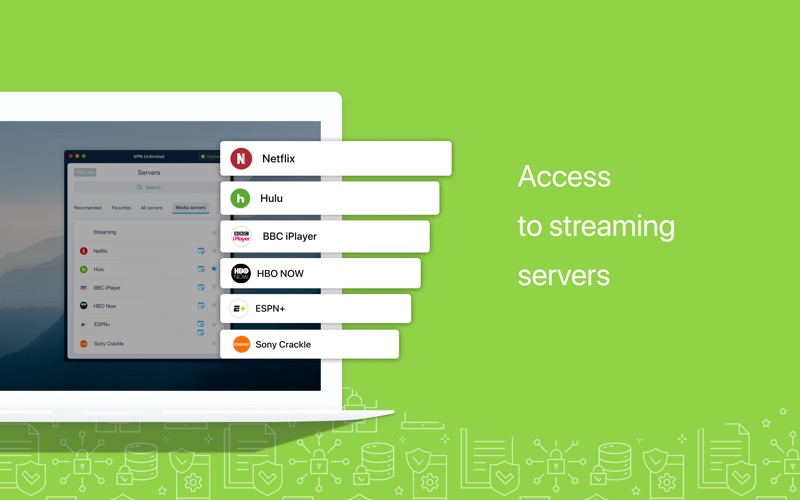 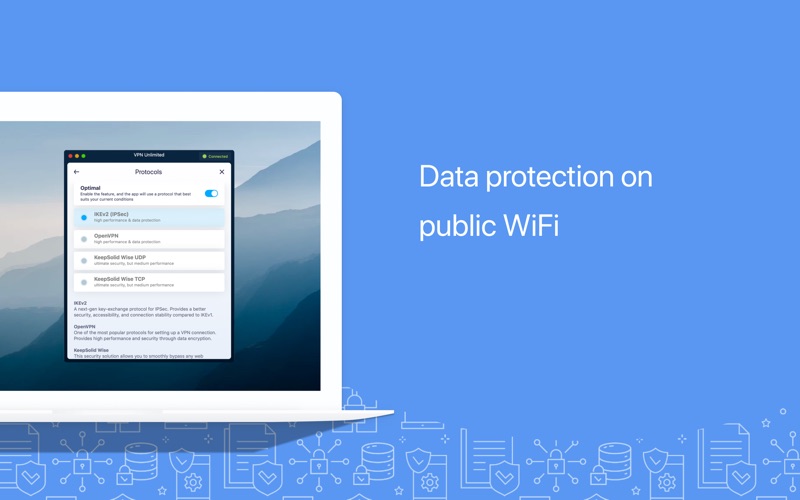 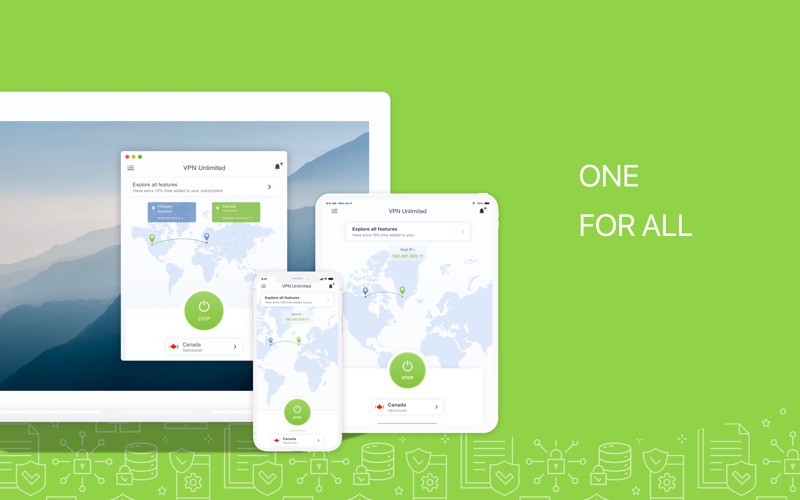 The only thing that I wish would be fixed is that it could remain connected to the VPN when asleep. It disconnects when I put my computer to sleep, then when I open my computer there are 10 tabs of VPN unlimited trying to reconnect and get me to log back into my Google account to authenticate my account. I'm not sure why it has to disconnect when it goes to sleep. Other than that, great stuff.
By camtennisboy

This app works seamlessly with both my apple products and my android phones. I love it
By stugavin

Great, specially since I got the lifetime license. Only gripe would be that I wish they had streaming servers to stream netflix from regions other than north america.
By a_prithul

The best VPN I know. Simple and fast. Upd 1: A lot of servers in many locations. And network is expanded so fast Upd 2: The new interface is convenient. Compact and efficient. Cool! Upd 3: Streaming servers work well (have been using it every day) Upd 4: This service is doing better and better. Finally they fixed KillSwitch feature - thanx so much Upd 5: Fresh design is very cool. More stable Upd 6: New locations are helpful for me and WireGuard protocol faster then others Upd 7: Good for short trip to China and South East Asia. Upd 8: Firewall works cool!
By Oleboc

Thanks for my protection

Been super good to me

Staying with this VPN for life!
By bennyschoops

Overall good VPN, if you are willing to accept some limitations.

I have been using VPN Unlimited for about 3 years now, and it has been a fairly solid service. Using WireGuard protocol, the iPhone version of the app is SUPER reliable and stable. I have had other VPN services that don't deal well at all going in and out of signal, and back and forth from WiFi to cell, which happens to me all the time; VPN Unlimited deals with it PERFECTLY. The speed is good enough, but not the fastest out there. Overall I like the service, so it is what I am currently using. The VPN is good and it is the best value out there. Customer support is accessible and very helpful. I hope they stick around. I would rate this 5 stars but for the issues below. My few gripes: With the unlimited plan that has 5 devices... you can only remove 1 active device per WEEK... so if you reinstall your OS, or reinstall a couple browsers, you must re-authorize each device before you can use the VPN again. If you are near your limit for slots, too bad, you are out of service until the weeks go by. That is unacceptable to me, but I understand why they do it, so people can't get away with using a 5 device plan for 20 devices, re-authorizing constantly. Still, there has to be a better way because I have been locked out from using the service too many times from doing normal computer things. I drop a star because of this policy. Another issue I have had is the service doesn't seem to deal with double VPN connections well. I run the service for the whole house on my router, and when I get home, if my VPN service is still active on the phone, I often, but not always, lose internet connection. I solved this by removing my phone from the router's VPN and leaving the VPN Unlimited App connected all the time on my phone. However, this hasn't helped with my laptop and iPad, where they are both on the router's VPN at home, and sometimes I need to use a different server. I have my router set for the fastest server, but that server doesn't work for streaming, P2P, or the need for a foreign IP, and when I try to connect to a server that allows those things and the device is already behind the router's VPN, the app connects, but I often have no internet. I have not had this double VPN problem with other VPN services. I drop a star because of this quirk. One curiosity: on my computer the app makes MANY connections(dozens) to odd sites through my firewall, like chinastoryshop dot com, and freeshophub dot net. I think they just use these sites to resolve to a changing set of IPs, without the program having to be updated to keep in sync with the changes. If that is what is happening, it is a clever way to deal with blocked VPN IPs and allow smooth and frequent changes of the service's IP addresses. It is a little disconcerting connecting to all those weird name sites, but that is really just a mind game, because all VPNs make multiple connections, just usually to numbered IPs, which don't trigger alarm bells in user's heads.
By macxlab

convenience it helsps me to gain access to infommation from pretty much everywhere in the world.
By ImageBan

I've been using VPN Unlimited for over 3 years and have been very satisfied with the service: ease of use on Windows, Mac, and Linux; fast throughput, choice of servers to connect. I bought the "lifetime" through
By Beelymagee