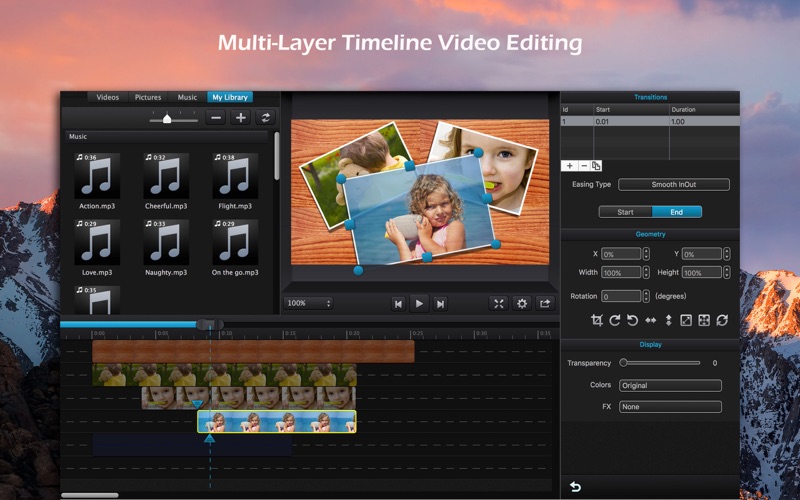 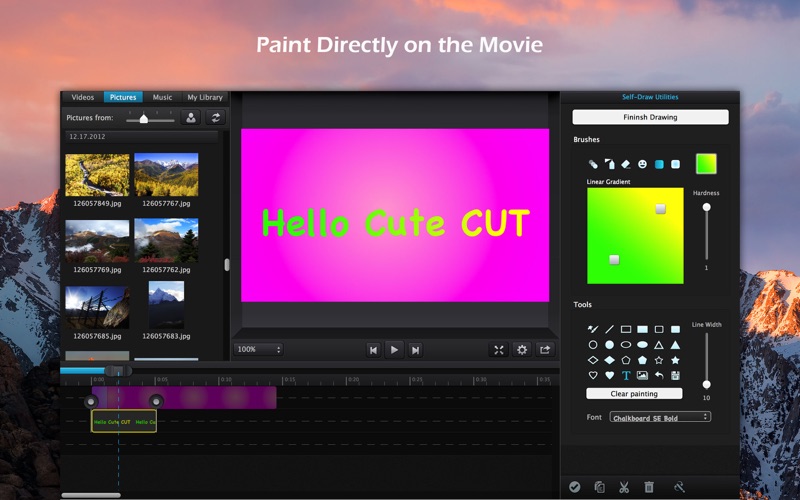 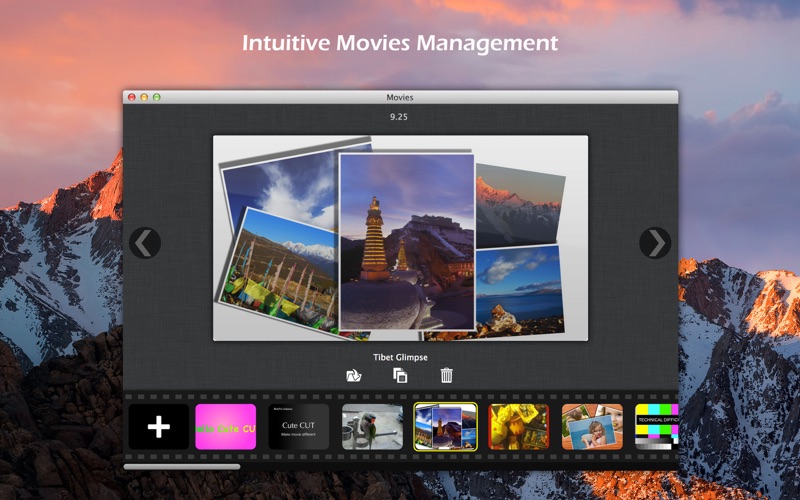 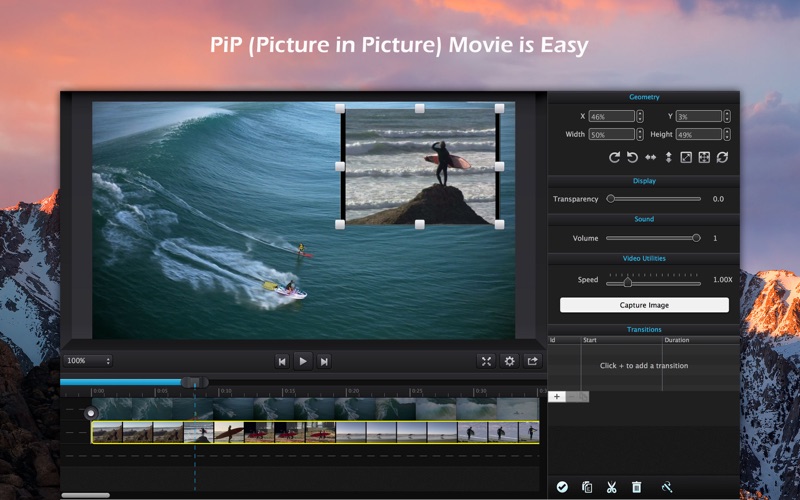 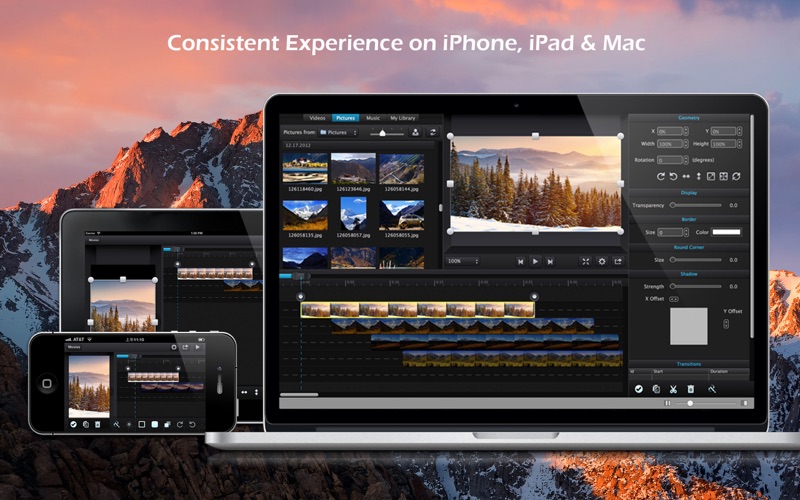 Don’t get me wrong, Cute Cut Free is a great application. This one isn’t. For starters, the paid version - $30 - only enables you to make your video longer. I mean, seriously? It’s the exact same thing as Free. Oh yeah, and the sound doesn’t work. There’s that. Overall, huge waste of money.
By Dead._.

The one on my iPad I use to make all my YouTube videos, and it works perfectly especially for IOS. I finally got a computer and I was looking for a decntly priced editor and I found out there was a cute cut pro for mac! I bought it thinking it would be good. It works just like the iOS one which I love, except when I try to replay what ive made to make more edits I can’t. The video is very laggy, like 5 fps and its extremely hard to make those detailed edits. Besides that great, cheap editor. Just please fix the lag.
By Am.1233.ny

The app is surprisingly similar to the iOS version. Some developers have a hard time duplicating the same experience on the Mac, but this app maintains the same consistency and ease of use. I wish there was more flexibility with the formatting. For example, it would be nice to control the resolution manually. I also miss having 1:1 aspect ratio as an option. The resolution is also very low. Otherwise, it’s not bad.
By TimBsTechTalk

THIS APP IS A HORRIBLE WASTE OF MY MONEY

I am a very frequent customer of apple apps, adn was not pleased with this one. It is very sad that the app on my iphone 6s is better than this trash that I have paid 30$ willingly for on my Mac. I have an i5 Mac with an 8gb Ram processor which should be capable for video editing, which is why I purchased it after getting advice for a good machine. I wanted to go for final cut pro but I thought this app would be sufficient. I try and edit videos, and the app quits out unexpectedly frequently. Just recently I produced a video, and when I try to edit the sound on it, there are parts where in the clip on my screen is at 100% for the suond, while in the video it will come out lower and then have an outburst. There is however no way to fix this unless if you start over or move the clip which also moves all of your other clips therefore ruining the video. Another problem that I am having is that it freezes and plays in choppy slow motion when I play some clips and attempt to speed them up for a “time-lapse”. This causes for mistakes and also is a defect in the app. Lastly i was not going to complain about the app, as I usually just bare with things like this, but now I cannot edit a single clip without it freezing and closing out, so now I just need to know what I can do, or if there will be an update to fix all of these errors, however Ive already been negatively affected by it, and just will regret spending my money on it.
By Trevor Johnson...

Very Good App and its Easy Simple To Use

I like this app because it is very simple and easy-to-use. I use it all the time, especially when I do my news report, because I can do away without all that fancy gizmos especially in iMovie. I can make a 10 to 15 minutes News report Done a lot faster and much quicker. but, I was trying to get a manual and instructional videos on YouTube; but all I get is a bunch of kids on youtube, acting like if they don't know what they were talking about. I wish they would have a grown-up that can speak English rather then a foreign language documenting those YouTube videos. It's a very good app, I wish they would give you updates on this app, but I never seen any updates on this app whatsoever. But on the other hand, this app is plain and simple and I like the way you can do fading in and outs on the video along with the audio.
By JuniperTowerProductions

Everything about it is perfect, except the fact that when I playback to view what I’ve done, it freezes, so I have to save it and then watch it. It gets very tedious, I hope they will fix this. Otherwise, it’s totally worth the 30 dollars!
By BadgersDog

I have cute cut on my iphone and i absolutely love it. I’m able to make video edits so quickly on it. When i heard they released a version for the Mac, i knew i had to download it. So I did. Worst idea ever. I’m currently trying to make a short 2 minute video, but cute cut wont let me add up to more than three media items. When i do add a fourth media item, it doesnt even show up in the actual video. It’s basically like its not even there. Also, the videos i do have in the project don’t play smoothly like they’re supposed to. And if i mute the sound on a video, there’s a bunch of weird clicking noises that don’t go away.
By Pendertree

Not Ready for Prime time

I have Cute cut on my ipad and it works great. But the mac version has a lot of glitches I use Mavericks OS 10.9 and sometimes when using 1080p video it will not show when playing or editing. Just a blank screen. I have to go into settings and click on and off the HD button to get it to show. Here are a list of improvements I wish they would incorporate: -Ability to turn sound volume up past 100% (some audio can be recorded at a a low volume or far away). - Allow for audio and transparency adjustment bars to be accessible without needing to click on the transitions button. -Be able to combine transitions - when double clicking on a video clip to edit the clip, DO NOT have it automatically go to beginning of clip. Let it stay were the edit point is. It is easiler to sync audio and other tracks. - when cropping (adjusting the length) a video or audio clip on the timeline, Do Not automatically ripple delete so the clip automatically moves to where the start of the clip was. This can throw off syncing of an audio track with a video track. -AND PLEASE allow for the multiple tracks to be split at one time. It would really make my day if you could split an audio track and a video track at the same edit point at the SAME TIME. Thanks for your consideration -
By bweagle

This Can do everything a video editor shoudl do worth way more then 30$ IT IS AWESOME!!!!!!!!! Thank you so much developers!! totaly worth getting!!!!
By rrepublic1