By Off Coast LLC

Your brain processes images 60,000x faster than text - SEE YOUR FORECAST • #1 Weather app in 55 countries • "Apps we Love" – Apple • "My primary weather app" – John Gruber of Daring Fireball ▶ SUPER FORECAST – INDUSTRY FIRST Why pick one provider when you can get the best of them all? We combine the world's #1 forecasting data + #1 rain data + #1 radar to create a super forecast with no weaknesses and only the best. ▶ TRAVEL ASSIST – INDUSTRY FIRST Never have duplicate Current and Home locations again. ▶ 18 THEMES • Pick your theme for iOS light/dark mode • 18 themes, from Black Hole to Emoji and Funfetti • 4 different dark modes • Over 50 matching app icons ▶ RADAR + DARK SKY • HD Radar • Dark Sky down-to-the-minute precipitation on the same page • 4 map options • Auto-play or only when tapped ▶ PRIVACY ⊘ No background location tracking ⊘ We never store or resell your location data ⊘ We never know or transmit your Home address ▶ EXTREMELY DETAILED • Global Feels Like setting • 10 day forecast • 48 hour forecast • Average temperature for the day • Monthly averages for travel planning • Moon phases • Custom units • Severe weather warning reports • Precipitation chance and amount • Dew point • Humidity • Sunrise & Sunset times • Wind speed and gusts • UV Index • Cloud Cover PAID OR FREE • Free = basic weather data, basic features, with ads • Supercharge = unlimited access to everything, no ads - Try 7 Days Free - Monthly for $1.99 - Annual for $9.99 ($0.83 per month) - Lifetime for $44.99 LEGACY DISCOUNT • We are pleased to offer any legacy Weather Line 1 user 50% off their first year, $4.99 per year (less than 50 cents per month). ADS • Free users - We never send any location data to them, but they probably use your IP (for example) to figure out a broad location. This happens when you see ads to show ads from your area. • Supercharge users - We completely disable the Ad code, so they cannot run or know anything. Email team@weatherlineapp.com with any questions! www.weatherlineapp.com/privacy www.weatherlineapp.com/terms 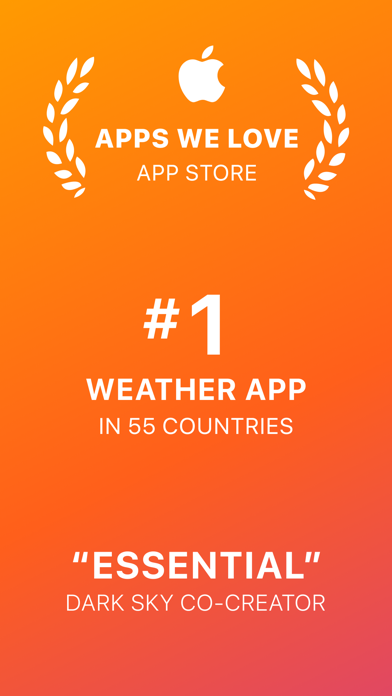 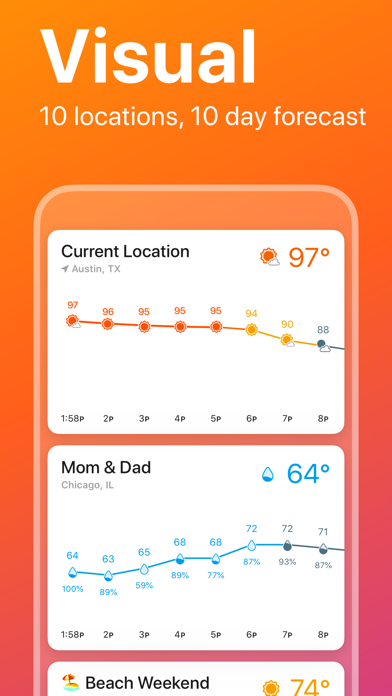 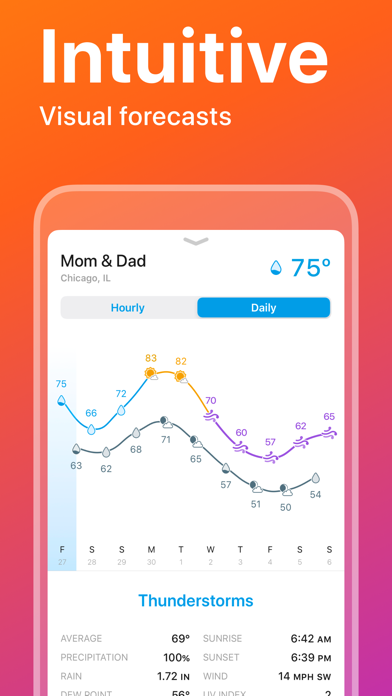 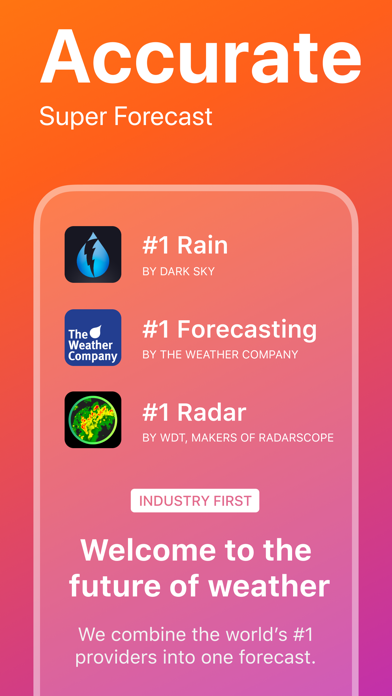 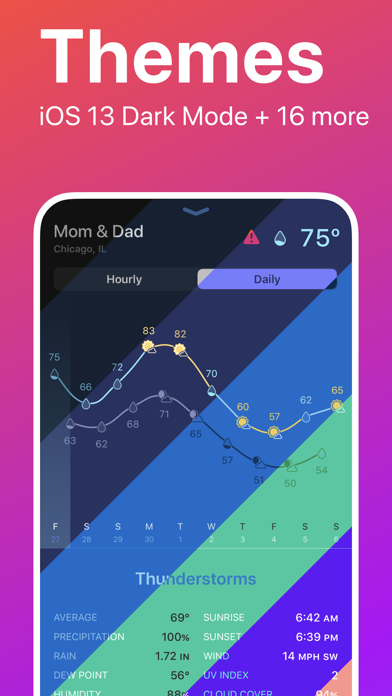 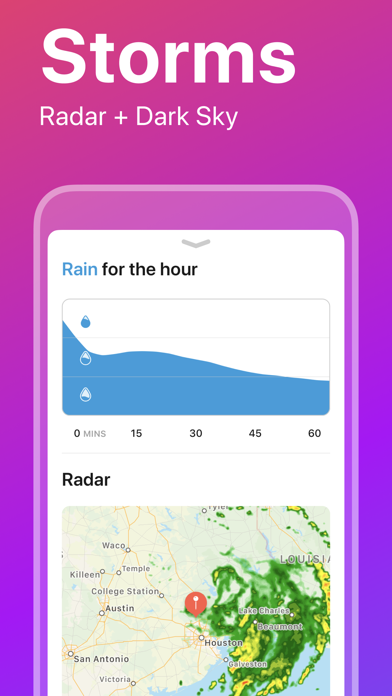 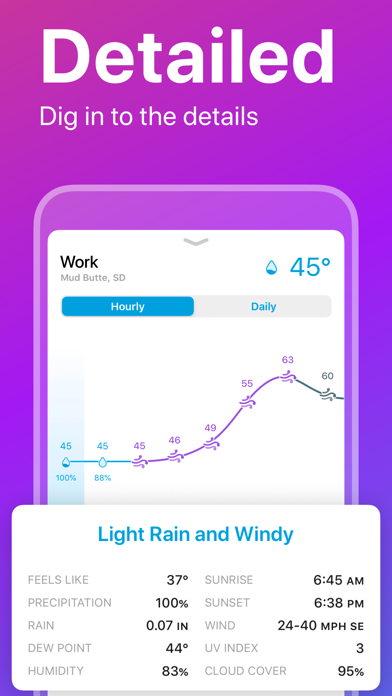 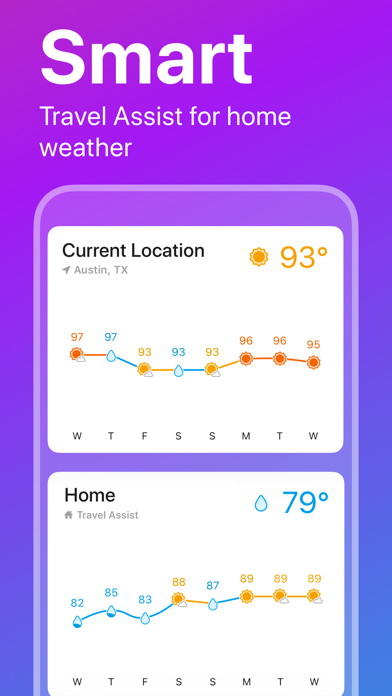 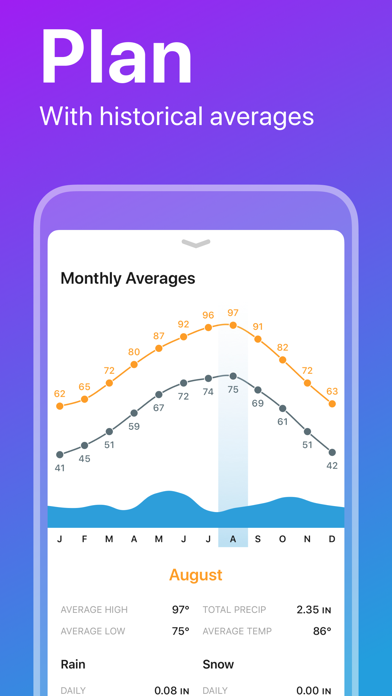 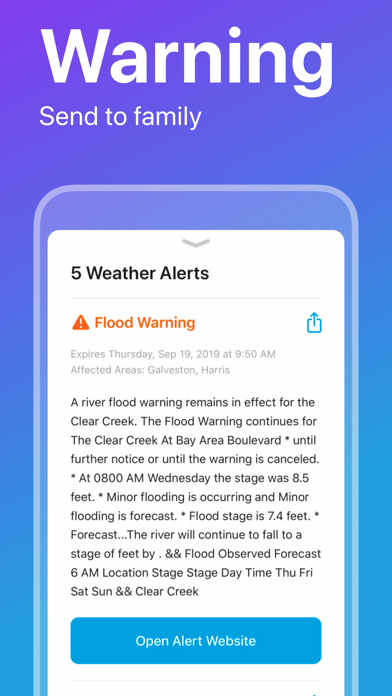 Looks like it’s a really great app. But unless you’re willing to pay a monthly subscription or a $45 “lifetime unlock,” the app is no better than any other basic weather app. I can see paying for an app with premium features, but the pricing on this is ridiculous. Want moon phases? Can’t have ‘em. Want animated radar? Nope. Want _______________ (anything other than basic weather info)? Pay up. It’s a weather app! Not a... whatever kind of app would actually be worth $45! 🤷🏼‍♂️
By Doebank Designs

It looks nice, but looks aren’t everything. A weather app is only good if the data is reliable and that is where WeatherLine fails. I did purchase the supercharge subscription, but that has been a waste. Snow forecasting is unreliable in my area with this app. Daily forecasted total over 8 inches but the hourly forecast never gets above .02 inches per hour. Upon reaching out to support I was advised to try a different source (DarkSky) however WeatherLine’s DarkSky forecast is different than DarkSky’s own app. The only somewhat accurate forecast is the free NOAA option. I have already canceled my subscription, but since I’ve paid for the full year I’ll be keeping an eye on development, but as of now I will not be subscribing again.
By Adam522666

I heavily judge apps by how well supported they are. I can attest that Weatherline has wonderful support which is very responsive. Thank you!
By MattsMovieReviews

Compared to previous version, this version is not substantially better in any other ways. The transition animations feel slow and get in the way.
By Laval peng

Great app, but even a couple second wait time for launch data is tough when default app has most of what I need very quickly. Would be great if there was someway to keep the data either eagerly fetched in the background or well cached for a super quick load.
By Cheeky Little Monkey

Amending my previously glowing review. The app on the iPhone is great, wonderful to look at and accurate. However, it’s expensive for what you get. My main beef is that there is still no iPad or Apple Watch support. That’s not cool. The updates/improvements have been sparse and when they do occur rather meh. This used to be my favorite weather app but it has never seemed to be a priority to the developers. When it was a pay once and forget it app, that’s forgivable. But now that it’s in the subscription model not so much.
By clin0048

Good app but could be better

Good app but for the price there is a few features I’d expect: * sync locations and setting between devices * multi platform support - e.g., iPhone and iPad * ability to set the distance for “home” location (i.e., at how much distance home location should show, rather than a fixed 3 miles)
By malus_domestica

Really accurate and worth the couple bucks. Great support too.
By Richber64

Best features of Wunderground made better

I used Wunderground for the widget graph of the forecast. When they ruined their app, I found this app. Couldn’t be happier.
By Elyk393

More by Off Coast LLC