Worried about passing the NCLEX-PN®? Master the most important test of your life with NCLEX Mastery. Featuring 1,600+ exam-like questions, in-depth explanations, and must-know strategies NCLEX Mastery will help you pass the first time. TEST Save time and study smarter with a tool designed with your busy lifestyle in mind. NCLEX Mastery is the perfect tool for both on-the-go and lengthy study sessions. Whether you want to be an LPN or an LVN, NCLEX PN Mastery was created by nursing experts who understand the struggle and pressure of nursing students just like you. We are always improving our study tool and adding new content at no additional cost. Install a limited free version today and jump start your studying! This version includes a limited amount of practice questions and basic progress metrics. Subscribe today and get access to: • 1,600+ NCLEX-style questions and explanations • 30% of the Questions are Select All That Apply (SATA) • Audio Practice Questions • Pharmacology questions • Unique tagging system to enhance learning • Customizable practice quizzes to help test your knowledge • Detailed test taking and study strategies Install NCLEX PN Mastery now and see why more than 2,500,000 nursing students made NCLEX Mastery the #1 rated nursing app. Our reviews speak for themselves! NCLEX Mastery is a subscription service. Our service offers three auto-renewing subscription options to help you pass your exam. • 1 Month auto-renewing payment of NCLEX PN Mastery: $19.99 • 3 Months auto-renewing payment of NCLEX PN Mastery: $38.99 • 12 Months auto-renewing payment of NCLEX PN Mastery: $95.99 -Payment will be charged to iTunes Account at confirmation of purchase -Subscription automatically renews unless auto-renew is turned off at least 24-hours before the end of the current period -Account will be charged for renewal within 24-hours prior to the end of the current period, and identify the cost of the renewal -Subscriptions may be managed by the user and auto-renewal may be turned off by going to the user's Account Settings after purchase -Any unused portion of a free trial period, if offered, will be forfeited when the user purchases a subscription to that publication, where applicable These prices are for United States customers. Pricing in other countries may vary and actual charges may be converted to your local currency depending on the country of residence. Our Customer Success Team is available from 9am to 5pm, Monday - Friday (except on major holidays). Call us at 319-246-5271 and email us at support@hltcorp.com with any questions. Privacy Policy - http://builtbyhlt.com/privacy Terms of Conditions - http://builtbyhlt.com/EULA 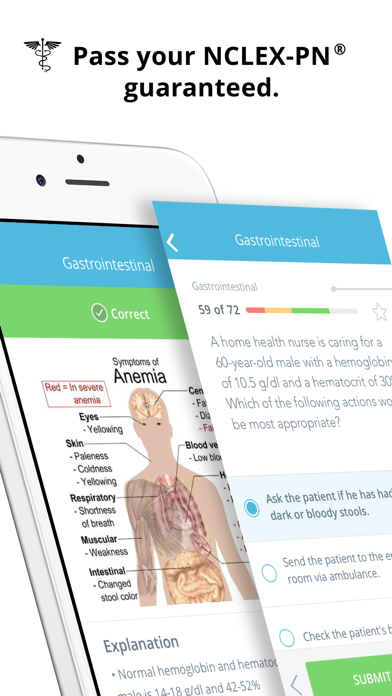 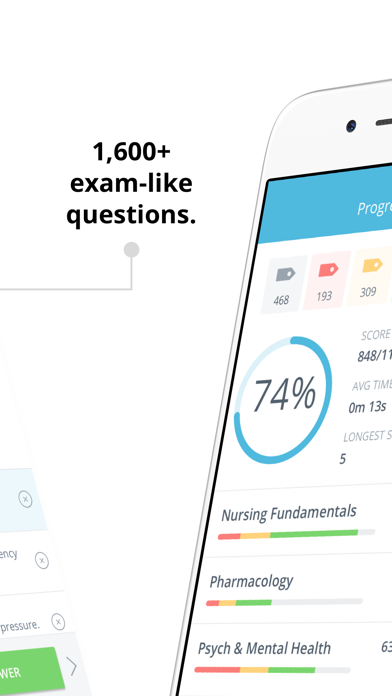 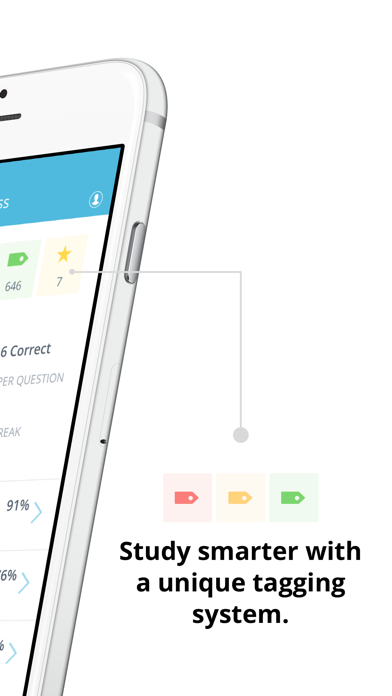 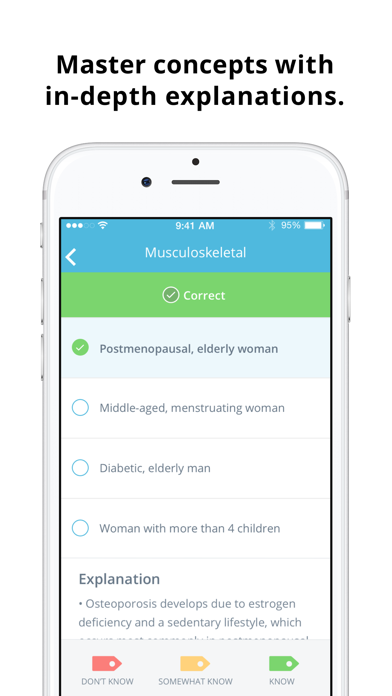 Took the NCLEX PN on 2/19 ( shut off at 85 questions ) and found out I passed using the quick results !! This app was part of that success and for every classmate that I have recommended it to as well. So, why the four stars? The app wasn’t a complete one and done study plan. 200 questions approximately a day for two weeks within the app PLUS , I also utilized ATI , and Saunders. The annoyance that I had with this app was that it did not give you a predictor test based off their standards to tell you your probability of passing. Yes, they have lots of really TOUGH questions and the interface is great (when it doesn’t crash between questions ) ; and you get lots of chances to improve your subject scoring. The rationals were good as well. I wouldn’t say this is a bad app to utilize at all, just don’t make it your only one. They want you to walk in and take your NCLEX thinking it’s easy , so don’t feel discouraged by this app. ( hence when I said don’t make it your one and only way to prepare )
By Deyon1984

Needs to be upgraded
By Kaynovia

I really love this product
By nurse nique ✌🏽

I don’t normally write reviews. I used this app the first time in 2017 and failed my NCLEX. 3 years later I decided to give it another try. This time I really utilized the app and did every single question. I took the time to read the rationale and looked up things I could not grasp. After a long time of feeling like a failure, I passed in January 2020. I had to do the entire nclex 206 questions. So please do not get scared. Please utilize this app in every which way you can. I didn’t use any other study material besides using google to look up things I still didn’t understand with the app.
By Jestucky

I appreciated being able to study anywhere, and when I tested it shut off at 85 questions and I passed. I wouldn’t of been able to do that without this app
By faithgmichels

I passed on my first try

This app is really good. It’s worth the 20 dollars. I pass my NCLEX on the first try!! I highly recommended.
By RonnishaaaaaaaaM

I don’t normally write reviews, but after using this app to study for the NCLEX-PN I had to. If you’re on the fence about purchasing the subscription - just do it! It helped me so much in preparing for the NCLEX! You can tag the questions you don’t know, work though multiple sections of content and keep the info fresh. Passed four weeks after graduation. First try!
By hulsey31

I just purchased this app for the second time. It is now not working. How can I contact someone about this?
By kncrjd

I really love this app when it’s working well. I’m able to study while on the go, waiting in line somewhere, nursing my infant, laying in bed at night, etc. My only negative feedback is that the app crashes often. Almost every time I first open the app, it’s a white screen. And then it also happens randomly as I’m studying. The question or flash card will show for a second and then everything will suddenly go white. Then I have to close it out and reboot. Sure, it’s no big deal to reboot I suppose, but when you pay for an app you expect it to work well.
By jhvghvj

ASVAB For Dummies and Mastery