Hit it Rich! Slots is the biggest collection of slot machine games based off of some of your favorite franchises! Follow the yellow brick road to Vegas in THE WIZARD OF OZ™ or fight the future with THE TERMINATOR™ slot machine. Hit it Rich! Slots has casino fun and mini games for everyone! Features: ICONIC GAMES – Spin slot machines featuring: - The Wizard of Oz™ - The Terminator™ - Ghostbusters™ - Willy Wonka & the Chocolate Factory™ - Elvira™ - The Princess Bride™ - Mustang Money™ - Dragon Lines™ - I Love Lucy™ - Marilyn Monroe™ FREE COIN BONUSES - Start Rich, and get Richer 10,000,000 FREE coins just for playing - Play Daily Bonuses and Bonus Games to make your wallet even fatter SHARE THE WEALTH - Connect with Facebook and send your friends FREE spins or FREE coins - Extend your stay when you play with friends! It’s fun, fast and easy VEGAS QUALITY & DESIGN - Head to the heart of Vegas with state-of-the art game design, graphics and sound - Each slot machine is lovingly recreated to look just like the real thing! BONUS GAMES GALORE - Play action-packed bonus games with HUGE jackpots! - Choose your destructor in Ghostbusters™ or test your fate with Freaki Tiki 2. There’s always a fun new game to play in Vegas! Facebook’s best slots game is available for iPhone, iPad and iPad mini! Download today and start your slots journey! Additional coins available for purchase. Facebook: Facebook.com/HitItRichSlots Twitter: Twitter.com/HitItRichSlots ADDITIONAL INFORMATION: • This game is intended for an adult audience and does not offer real money gambling or an opportunity to win real money or prizes. Practice or success at social gaming does not imply future success at real money gambling. • The game is free to play; however, in-app purchases are available for additional content and in-game currency. • Use of this application is governed by Zynga’s Terms of Service, found at www.zynga.com/legal/terms-of-service. • For information about how Zynga uses personal data, please read our privacy policy at http://www.zynga.com/privacy/policy. • The Wizard of Oz™ - THE WIZARD OF OZ and all related characters and elements are trademarks of and © Turner Entertainment Co. (s17) • The Terminator™ - The Terminator ©2017 Studiocanal S.A.S. ® All Rights Reserved. • Ghostbusters™ - TM & © 2019 Columbia Pictures Industries, Inc. All Rights Reserved. • Willy Wonka & the Chocolate Factory™- © and ™ Warner Bros. Entertainment Inc. (s17) • Elvira TM & © 2019 Queen "B" Productions. All Rights Reserved. • The Princess Bride™ - © Princess Bride Limited. All Rights Reserved. • I Love Lucy™ - I LOVE LUCY and related marks TM & © 2017 CBS Broadcasting Inc. All rights reserved. Images of Lucile Ball & Desi Arnaz are licensed by Desilu, too, LLC. Unforgettable Licensing. • Marilyn Monroe™ - Marilyn Monroe™ and the Marilyn Monroe signature are trademarks of The Estate of Marilyn Monroe LLC. Rights of Publicity and Persona Rights are used with permission of The Estate of Marilyn Monroe LLC. Photo Bernard of Hollywood © 2017 Renaissance Road Inc. marilynmonroe.com 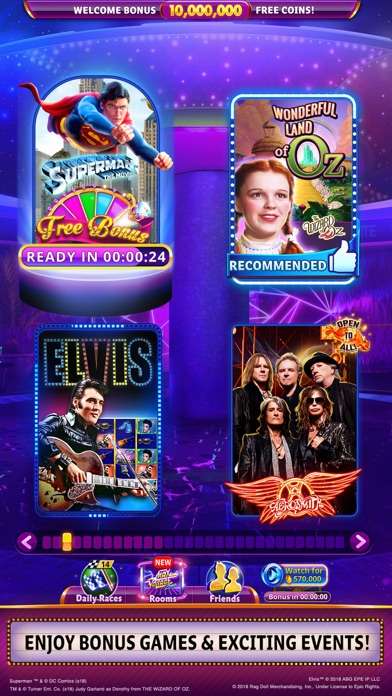 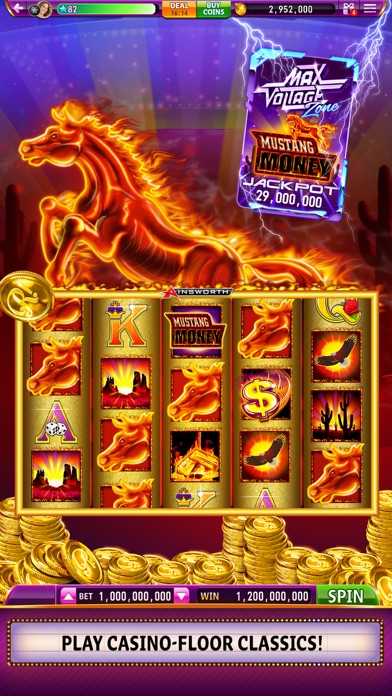 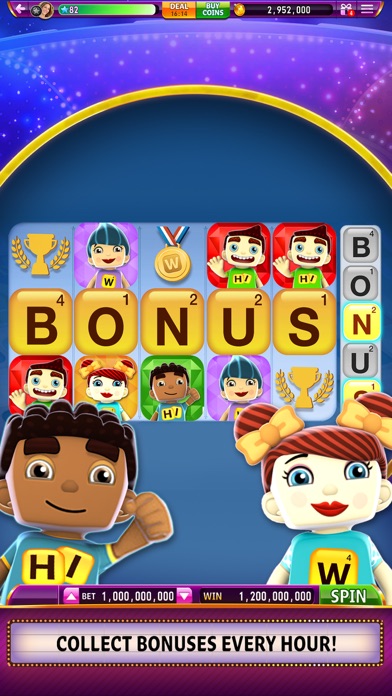 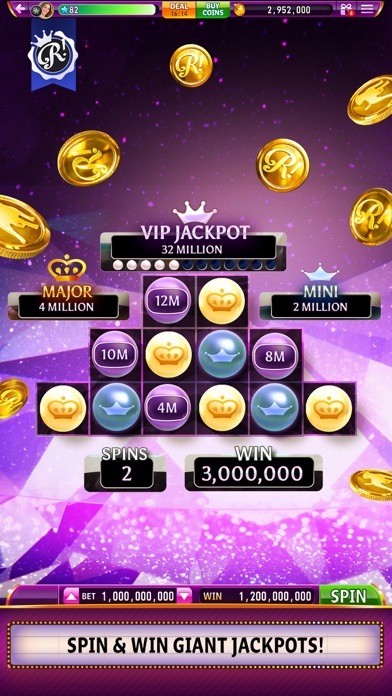 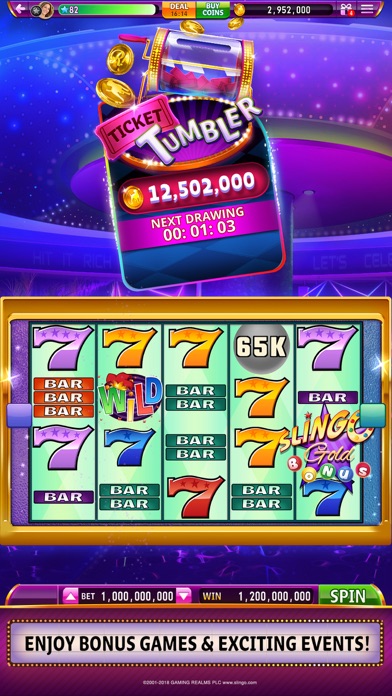 Great games lousy customer service, I had over 20 billion coins on my mobile phone went to play earlier in the week everything was gone and purchased the ridge pass and it was gone customer service contacted three times and have yet to respond so in short I wouldn’t buy a thing from these people again.
By yllekkcid

Be careful paying for things like the rich pass. Bought it with an ending balance of $14 billion if you complete the objectives. I completed them and they changed the final payout to $1.5 billion. Nothing like paying for something only to have it altered after the fact.
By Firenut85

Great graphics and payouts!!
By jojopjb

All of a sudden my points are cut in half, my friends gave all disappeared, I’ve gone from level 16 hundred plus to level 1, I have no free spins and I’ve gone from the 300% level to the lowest beginner level. Also all of my profile had disappeared. What the hell is going on? If this is the way you operate I’m through with Zynga
By Seventy something

This nonsense is like rotting meat it just keeps getting worse over time. If you are stupid enough to believe the fake 4.6 average review than you 100% deserve to loose every dime you are stupid enough to give these crooks. This is a perfect example of how a scam is operated, they find ways to manipulate the apple rating system, try to bait people by offering crumbs for free points hoping you are either an addict, developmentally challenged or under age and will start paying to play. I’m dumbfounded and shocked that there are enough stupid people out there willing to spend hard earned money on something so obviously rigged. However the rich need stupid people or they will go broke. So tag stupid you’re it! Moreover the people than run this sham have to be complete psychopaths because anyone with a moral compass would know something like this hurts the most vulnerable of any society and would be so consumed with guilt and shame they could not look at themselves in the mirror everyday. The other option is this is run out of some broom closet in a 4th world country. Every Zynga employee should hang their heads in sheer disgust and humiliation for contributing to something that huts those who can least afford it, or who don’t have the cognitive skills necessary to know better. I actually look forward to the day when this cancer is eradicated from the App Store. This elevates moronic to to a whole new level and makes stupid look smart.
By Clive3883

Paying for your mistake

Not even worth one star. On your rich pass when you pay the $4.99 to get the piggy banks you should get what you said like the 80billion not give excuse you made mistakes we paid for that we should get what you said we would. You took everyone’s money it really wouldn’t hurt to eat your mistake. You really need to read all the negative comments because it will take you some time and maybe try to do something other than our money and then say it was a mistake.
By No help with game

DO NOT purchase the Rich Pass. I purchased it at the beginning of October in good faith, played all the way to the last piggy payout and was shown I would receive over 72,000,000,000. When I got on yesterday to play a bit that final payout amount had been reduced to under 10,000,000,000 with no explanation. When I emailed about it, I was told that there was a bug and that it had been fixed so that going forward anyone who got to the end would get the “proper” lower payout. I emailed again pointing out that I HAD already reached the end and earned the higher amount as promised and was brushed off. These people will get no more of my money ever, not on this game or any other. They are liars and cheaters. Be warned.
By peppermint2358

I used to love playing this game but now I’m deleting it . have played for years the hourly bonuses stink , for some unimaginable reason it always pay the lower amount you lost a player
By jonnycat5111

Why am I having so much trouble loading this game? It is frustrating!! Trying to get points & it freezes up. I will delete this game if it continues. No fun.
By betty davi