FINAL FANTASY IV: THE AFTER YEARS is available on iPhone, iPad, and iPod touch! With a full 3-D remake, FINAL FANTASY IV: THE AFTER YEARS can now be played as never before. Take part in the epic sequel that unfolds nearly two decades after the events of FINAL FANTASY IV. Classic characters make their return alongside several new heroes, such as Ceodore, son of Cecil and Rosa. - Ten Playable Tales Begin your journey with "Ceodore's Tale." Complete it to unlock the tales of six additional characters, which can be played in any order, and then return to the core story with "Kain's Tale," "The Lunarian's Tale," and "The Crystals." A total of ten tales in all, and all contained in FINAL FANTASY IV: THE AFTER YEARS. - Active Time Battle Take control of exhilarating combat made possible by the non-stop action in Square Enix's iconic battle system. - Lunar Phases Feel the moon's presence in combat, as its waxing and waning influences the potency of attacks and abilities of all combatants. Lunar phases cycle naturally with the passage of in-game time, or when resting at an inn, tent, or cottage. - Band Abilities Combine the strength of your party members to awesome effect with Band abilities that can be unlocked through in-game events or by leveling your characters' Affinity. - Minimap Keep an eye on your current location and nearby surroundings, or tap for quick access to the world map. - Game Center Support Step up to meet all-new challenges offered by dozens of achievements. - Widescreen Support Enjoy fullscreen display on iPhone 5, iPhone 5s, and iPhone 5c. STORY Seventeen years have passed since the war's end, and the son born to King Cecil and Queen Rosa of Baron has grown into a young man. Prince Ceodore has enlisted in the airship fleet known as the Red Wings, eager to meet the expectations demanded of his blood and station. Yet once more another moon has appeared in the sky, and with it vast hordes of monsters intent on destruction. The brief peace enjoyed by the Blue Planet now stands threatened under the shadow of impending catastrophe. 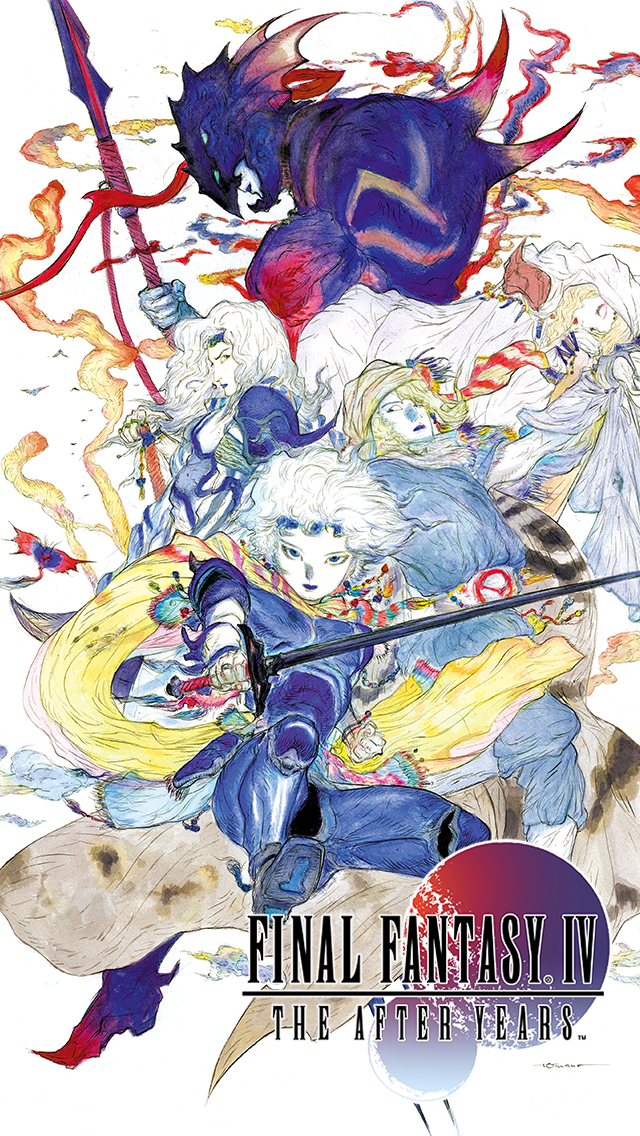 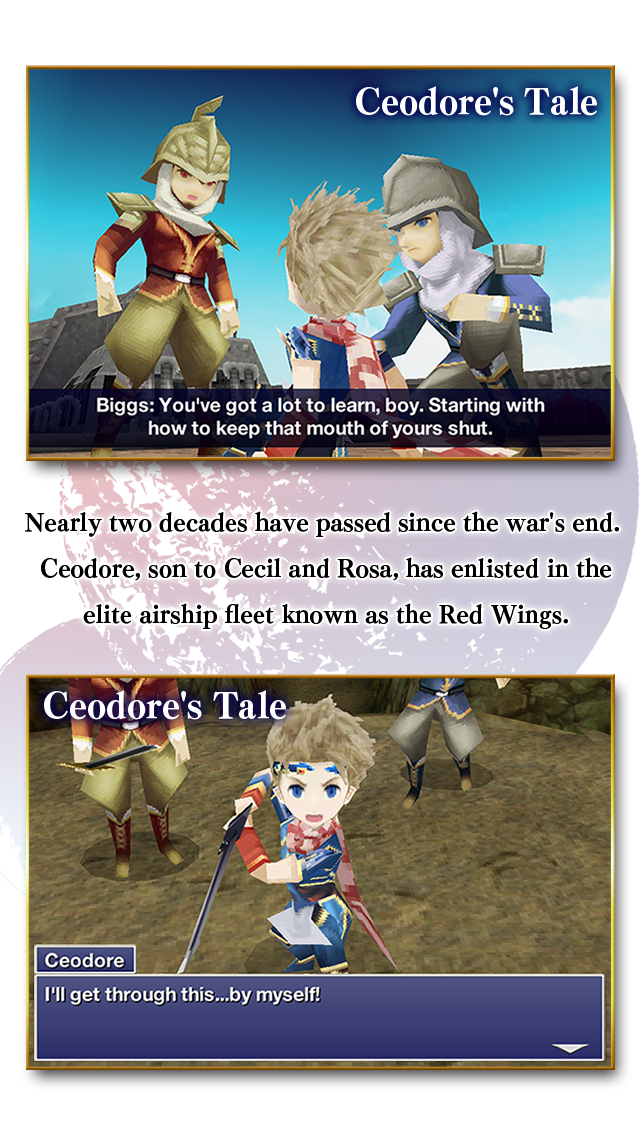 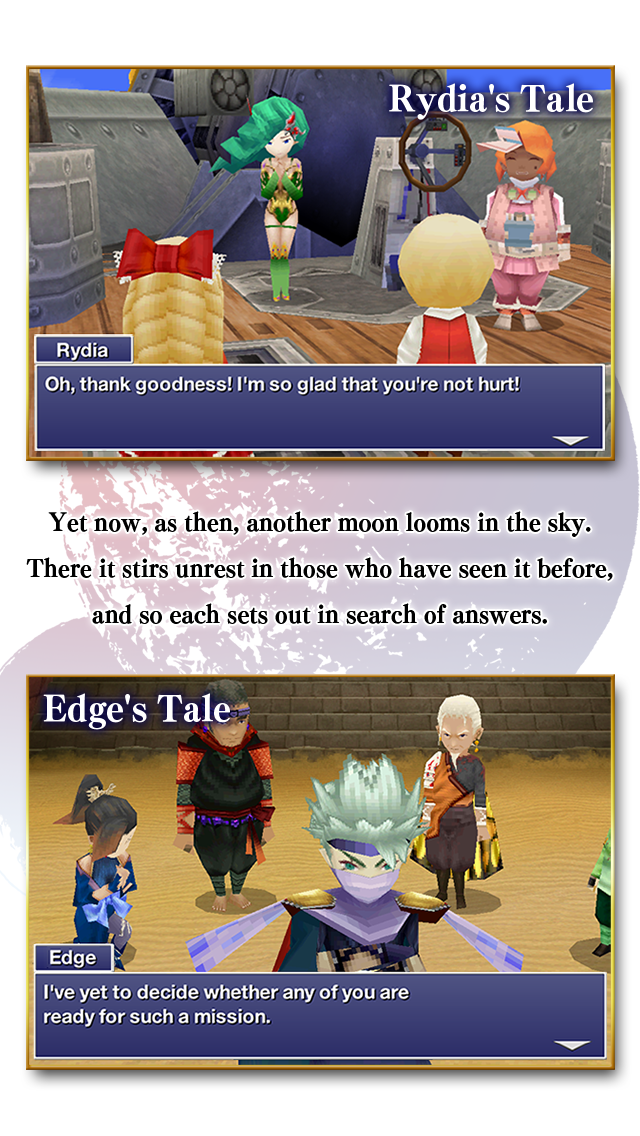 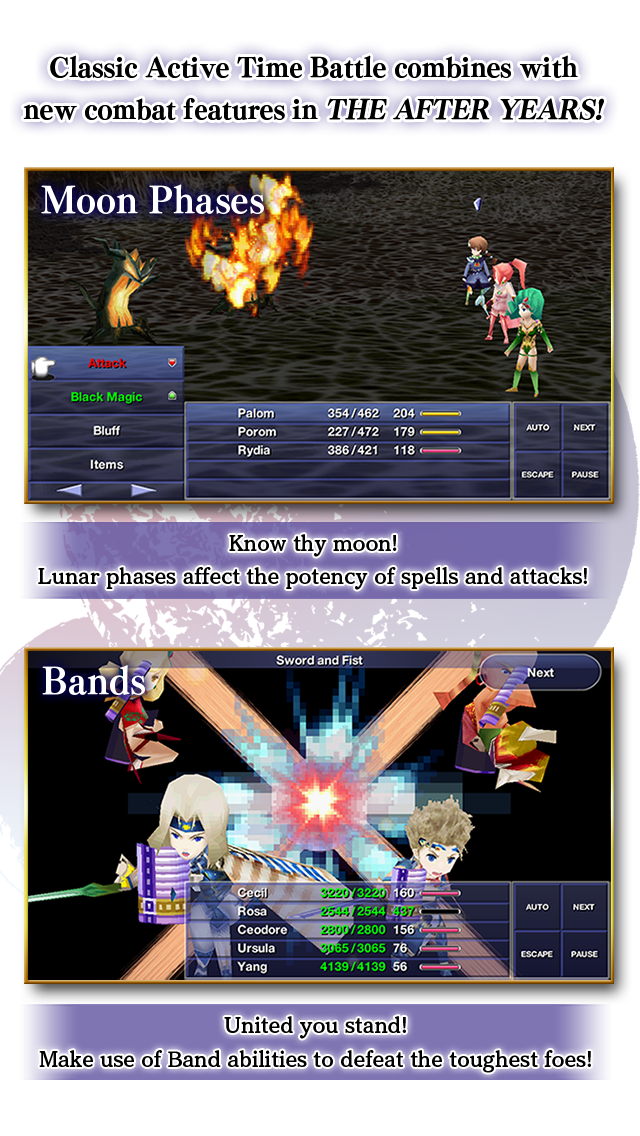 I am enjoying this version of Final Fantasy IV The after Years, although the absence of The Challenge Dungeons makes it harder and more tedious to level grind outside The Crystals portion of the game. Still, it’s pretty good. Plus, the graphics were really good.
By Mike L.G

I loved the initial release on WiiWare and loved this 3D remake. Just wish they’d fix the screen size issues for larger phones and add mFi controller support.
By kevin.patao

Has its flaws but great game

Just finished the after years and while the beginning of the game can be meh, getting to the crystals makes it more interesting. A lot of random encounters and bosses that can 1-2 hit and can kill you. RIP. Large character selection and bands. Would recommend if you’re final fantasy fan, if not I’d start with final fantasy IV
By Loveroffinalfantasy

This game is amazing. The story is deep, the characters are unique(except for maybe Ceodore. Literally just a cardboard cutout of Cecil. Still love him!), and the new moon phases are great! I actually have one problem though, it’s not taking any stars, but it is bugging me, why is there no voice acting? FF4 hat it, and it made me feel like the game was reality, gave it more flavor. Plus I’ve always wanted to know what Ceodore sounds like...
By BlueBoy08

Love the whole series. FF4 just happens to be my most cherished of them all so this was a no brainer for me. Loved it. Bands are great! The bonus dungeons at the end of each chapter are beyond awesome...wait, maybe that’s the Wii version but anyhow I played them both! Loved how you got to revisit stuff EXCEPT for the Waterway between Damcyan Castle and Kaipo. Having to go through there sooooooooooo many times became a real chore. Other than that, the story needed alittle more depth but great if your a fan like me!
By Absolutsynystar

Great in most ways...

Played "Yang's Tale" but didn't finish; the save point I used in the game went away after hours of playing when I tried to open the game again. It reappeared after I reloaded it for some reason. Not a deal breaker, but disconcerting. There is much to love about this game, and it verges on interactive fiction, which emphasizes the storyline over the martial prowess of characters. Storyline is clever, kind of reminds me of Saga Frontier (in that you get to play several different characters, but with better graphics). Square Enix unfortunately has recently been following the lead of more notorious companies by suffocating the genre with IAPs. I hope they change this, because to many fans of this genre, that IS a deal-breaker.
By Erazrhedd

Update this, PLEASE!! Come on! I paid money for this game! I can't STAND this "free" crap that's coming out nowadays! I want quality games that you only have to pay for once! It's been 2 years, UPDATE the App!!!!!
By MikeH24

A Great Sequel To a Great Game

I first played Final Fantasy 4 on my Nintendo Ds and loved it. I'm a dedicated PS4 player and play a lot of FF XV,FF VI. One day I was scrolling through the AppStore looking for something to play in my car. I then stumbled upon FF 4: The After Years, I bought it instantly. I don't play mobile games, but this game was the exception. I sold my Ds many years ago and I now feel my phone is the replacement for it. The graphics are also really good and crisp,so that's great. (playing games on my phone is a guilty pleasure)
By Ravenclaw Diva

I like the game. It is very interesting. My only problem is what looks like a bug involving Calca, Brina, and Luca where Dance and most Jives attacks keep landing on Luca, even though Dance is suppose to work on all party members and Jive is supposed to only target enemies. Can you figure out what the problem is?
By Yoda1174