GarageBand is the easiest way to create a great-sounding song on your Mac. Add realistic, impeccably produced and performed drum grooves to your song with Drummer. Easily shape the sound of any instrument in the Sound Library with Smart Controls. Crank up the bottom end with Bass Amp Designer, or mix and match electric guitar amps, cabinets, and pedals with Amp Designer and Pedalboard. Control GarageBand and play any software instrument wirelessly on your iPad using the Logic Remote app. Use iCloud to keep your GarageBand projects updated across multiple Mac computers, or even import GarageBand for iOS songs directly from iCloud. Redesigned Interface • A fresh new look, designed for easy music making • Find the sweet spot in every track with the interactive visual EQ • Support for Touch Bar on the MacBook Pro lets you quickly fine-tune sounds, navigate around your project, and perform instruments • Enable Quick Help and get useful hints wherever you hover your cursor Drummer • Add a virtual session drummer, percussionist, or beat producer to your song that takes direction and plays realistic beats • Choose among 33 players from popular genres like EDM, Hip Hop, Rock, and Alternative • Use a simple set of controls to shape your drummer’s performance • Each player can perform over a million unique groove and fill combinations Sound Library • Get inspired with a fresh new collection of sounds and instruments • Explore new Apple Loops covering the latest electronic and urban genres • Drummer loops can be added to your song and then customized with performance controls Smart Controls • Easily shape any sound in the library with a custom set of knobs, buttons, and sliders • The look and personality of Smart Controls changes with each instrument Amps and Stompboxes • Use Bass Amp Designer to dial up classic and modern tones • Build your own guitar rig with Amp Designer using 25 legendary amps and cabinets • Design a custom Pedalboard from a collection of 35 fun and creative stompbox effects Record. Mix. Master. Share. • Create a song with up to 255 tracks • Quickly change the timing of an audio recording using Flex Time • Use Groove Track to align the rhythm and timing of all your tracks with a single click • Choose your best performance with multi-take recording • Export to your Music library or share directly to SoundCloud iCloud • Use iCloud to keep your GarageBand projects up to date across your Mac computers • Start a song anywhere on your iPhone, iPad, or iPod touch, then import it wirelessly to your Mac to take it even further • Remotely add new tracks to your project using GarageBand on your iPhone or iPad Works with Logic Remote • Use your iPhone or iPad and Multi-Touch gestures to wirelessly play any GarageBand instrument on your Mac • Access Smart Controls on your iPad to shape any sound while you’re playing • Navigate your song and browse the Sound Library from your iPad Learn to Play • Get started with 40 Basic Lessons for guitar and piano covering classical, blues, rock, and pop • Free Artist Lessons show you how to play a hit song taught by the artist who made it famous 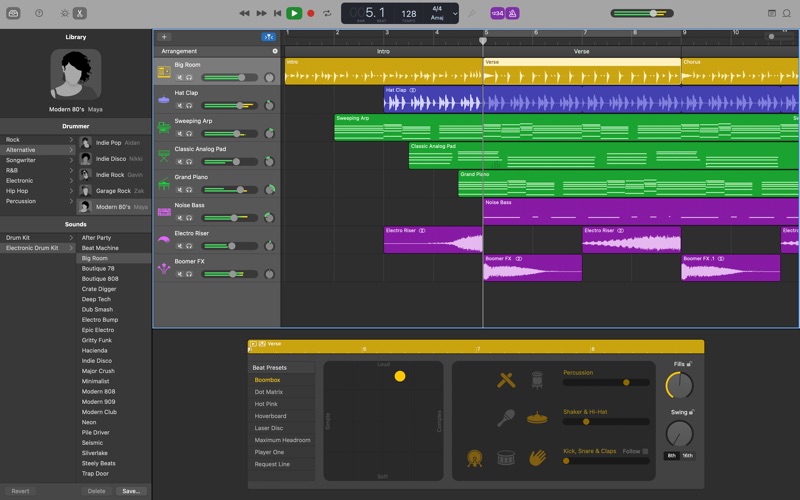 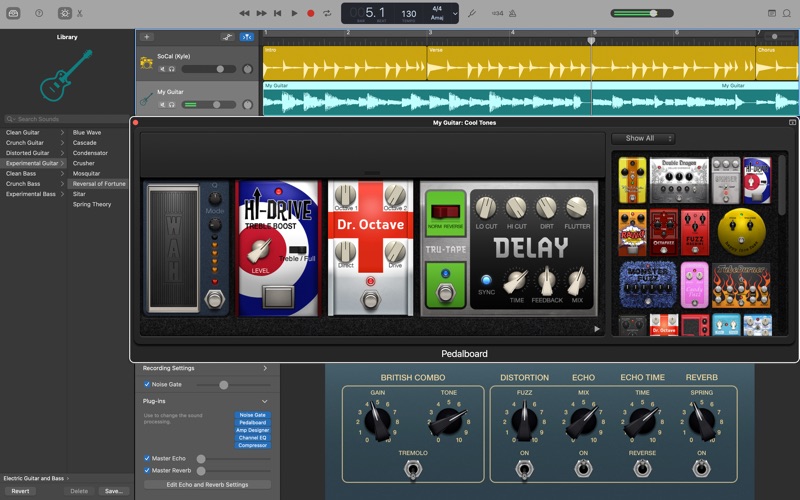 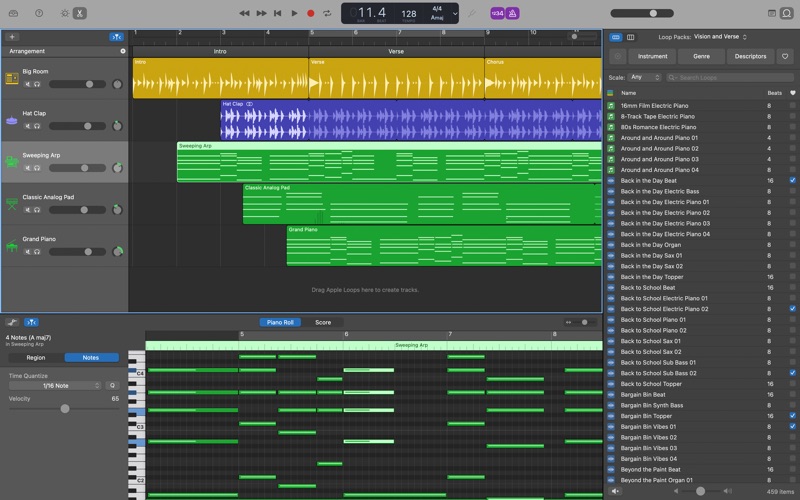 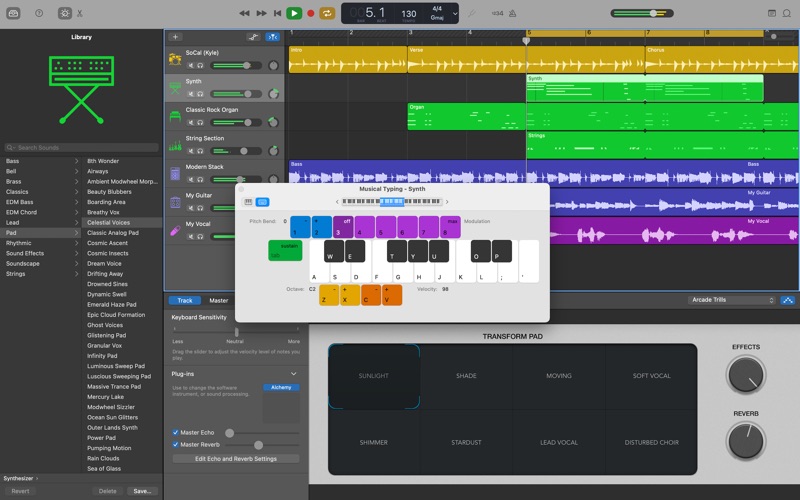 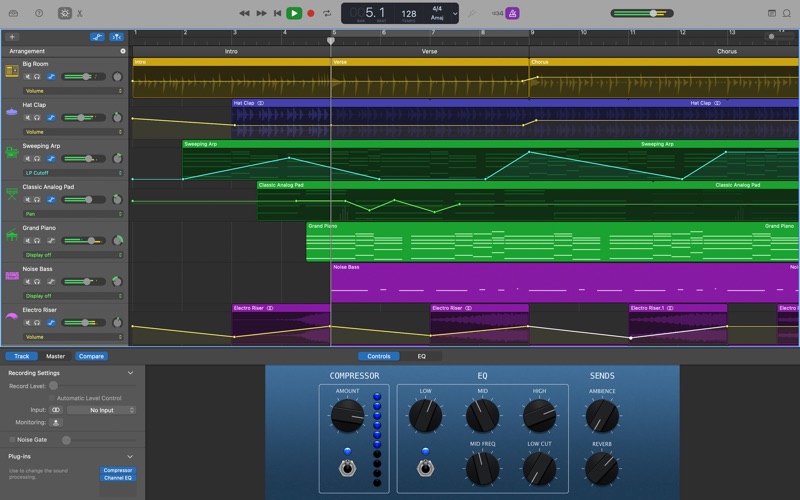 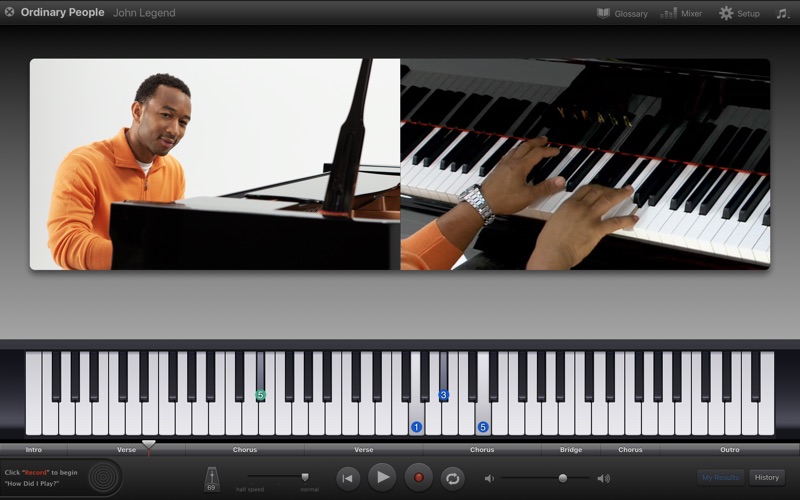 what needs to change on garageband 10

read the title. that is all i have to say.
By subscrib

I'm on MacOS Big Sur. I updated just so I could download GarageBand. Every time I try to open the app it crashes immediately. What a waste of 30gb.
By NintendoDoIt

Hey, guys. I'm seeing a multiasking bug for when minimizing and maximizing the software. When the software is clicked on to bring up from minzmized, the transition effect is not working and has what looks like a GPU glitch on the M1 Macbook Pro. You can recreate the bug by minmizing garage band, clicking on the desktop, and then maximizing it. Or, it also happens when one if multitasking between different software.
By Designlove56

Ive used garageband on my ipad for years before being able to afford a Mac. The crossover was simple all of the same functionalities with a few more bells and whistles (minus touch screen capabilities) so the learning process from mobile to desktop was quick and easily picked up while giving me more creating power. This DAW has to be one of the easiest but most effective music making progs. avail. and i grew to like the connection between the tablet and desktop giving the ability to transfer projects right from tablet GB to Mac version GB with no issues, and i later in life found the LOGIC app offers a mixing and more app that remotely works with desktop GB which made my add ins and mixing visible!!! from my tablet!!! as i worked!!!. Thumbs up on this software here which was an excellent gateway, stepping stone, lead off intro into LOGIC PRO X which is the same software but a more professional looking layout. So in return GB a great tool to have, even on my tablet which is my go to on the fly and actually has landed me several local and nationally known clients to work with due to its flexability and capabilities, Go hard at your craft you guys!!! im closer and closer to living out my dreams because of DAWS such as GB and LOGIC PRO. thanks apple you guys rock
By DannTee83

the app keeps crashing whenever

Update: Regarding those who lost the app/can't reinstall because of Big Sur: go to the app store, click your name in the bottom left hand corner. Under "Purchased by xx" find GarageBand, and click the cloud download. You should be offered the last version you downloaded. For some reason the track setting controls (quanta, velocity, recording settings, etc.) are missing for me which is why I tried to uninstall/reinstall in the first place. Maybe you’ll have a different experience. GarageBand was malfunctioning so I went to uninstall/reinstall. Turns out the latest version of GarageBand requires macOS 11 and unfortunately my MacBook Pro Mid 2012 non-Retina didn’t make the cut this year. Apple knows the type of machine each user has so why would they allow them to uninstall the app knowing they can’t get it back (maybe provide a warning) or better yet allow users to download the most current version compatible with whatever OS they have. Seems weird that my laptop can handle the newest versions of Logic Pro, Pro Tools, Ableton Live, etc., but not GarageBand. Either way I have no plans to upgrade anytime soon as my laptop still works great.
By Paul Oolman

I Like it- a great tool to learn the basics

OK- so I have been learning how to use a DAW for the past year and a half. Switching between Garageband and Ableton Live (Lite), Garageband is the one that really taught me. In fact, I liked it so much that I am buying Logic Pro. However, there are a few things- In the new update, Apple got rid of the Media Library, and now I have to pull up a seperate Finder Tab to search for the files that used to be right there- I had a full library of drum loops, one shots, and more. Also, it takes forever to find the higher-level stuffs, like plugins, third-party patches, that sort of thing. But other than that, it was a great beginning DAW, and I am ready to go higher.
By Metronome Music

My Mac nags incessantly that there are updates available, but I can't install them because I'm running Catalina. Why bother showing these to users whose OS is out of scope?
By MrWizardno2