--> SALE: 50% off! Instead of 9.99 just 4.99 US$! ****** Identify birds of the USA by their songs and calls! Automatic Recognition will help identify birds around you. Includes an audio reference library of 241 songs and calls. *** Top of its class, Bird Watching Magazine rated it 9 out of 10 saying it is remarkably accurate. *** Copied by a few, bettered by none, Bird Song Id is three years ahead of anyone else in this field ! *** Look at the many good reviews compared to similar apps claiming to achieve bird song recognition! *** 'Scientific American' writes: "It's Shazam for birdsong. Record a bird's warble—the cleaner the recording, the better the luck you'll have—and let the app tell you what species you're hearing!" *** Developed by automatic recognition experts in collaboration with published biologists. *** 'The Times Newspaper' said the app "Does what it says on the tin" and were amazed that "this astonishing piece of software costs about the same as a cup of coffee". *** Watch the film: vimeo.com/isoperla/birdsongid The most functional Bird Song app on the market by far. Make your own bird song recordings and keep a bird song diary. Have you ever heard a bird singing and wondered "What kind of bird is that?". Bird Song Id is a great tool to help you learn to quickly and easily identify birds by their songs and calls. It's great fun to use too. With Bird Song Id, identification can be enjoyed by the whole family. Bird Song Id has been created by professional published ecologists. The app does not need an internet connection, all songs and calls are downloaded when the app is purchased, one hundred and eighteen species are included. We have included an early version of Automatic Recognition in the app for you to try. We hope this feature will help you identify common bird species. However, it needs a good quality recording to work, and takes a bit of time and patience to get used to. Automatic Recognition takes place on the device, no connection to the internet or mobile network is needed. How successful is it? Our aim is to get the correct bird in the top three of those listed. In our testing of over 1,000 samples we found the success rate to be 85%. Remember this is an early release of this innovative feature, so please be gentle. A demo is available on YouTube. --------------- HELP ---------------- Automatic Recognition needs a good quality recording of the bird ------------- Remove the case from your iPhone if you use one as this will significantly dampen the microphone ------------- Only record when it is very quiet, apart from the bird singing of course ------------- Be close to the bird singing, as close as you can be without disturbing it ------------- Only record when a single bird is singing, or when a single bird is dominant ------------- The analysis graph should have plenty of blue and green colors with few or no black peaks ------------- Be patient, dont expect miracles, the system works but needs good clear recordings ------------- The peaks on the graph should reach all the way to the top. Low peaks indicate poor quality and recognition is unlikely ------------- A difference between two birds of less than 10% is not that significant, so listen to the samples from both to help you further ------------- The microphone is at the bottom of an iPhone, point the bottom of the phone towards the bird ------------- Record a single bird at a time ------------- Record for the full 30 seconds ------------- Avoid windy conditions. Air moving over the microphone will mask the bird sounds ------------- Playing songs to the app from recorded material on the internet, other apps or CDs is unlikely to work as this material is digitally processed and edited (inter phase gaps are often shortened). They sound very different to recording birds for real on an iPhone or iPad in the natural environment. ------------- 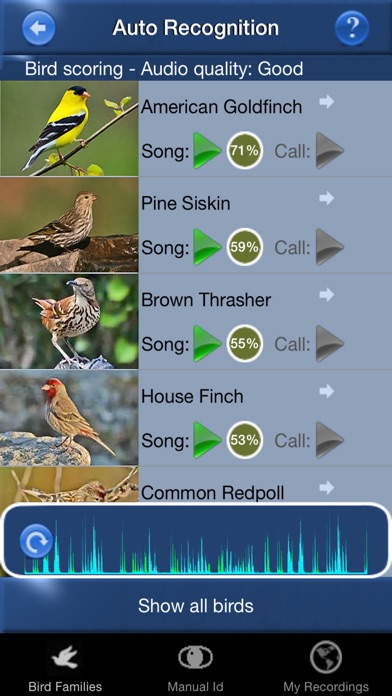 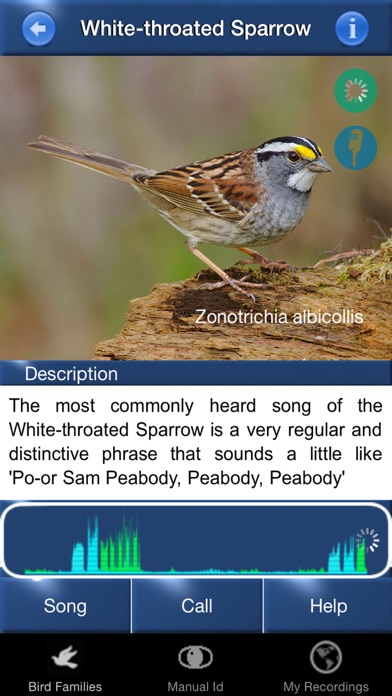 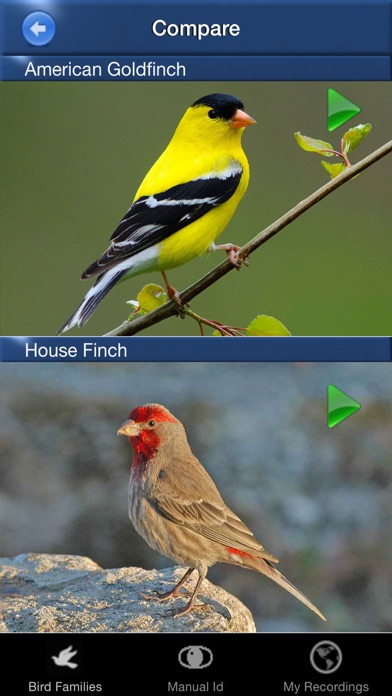 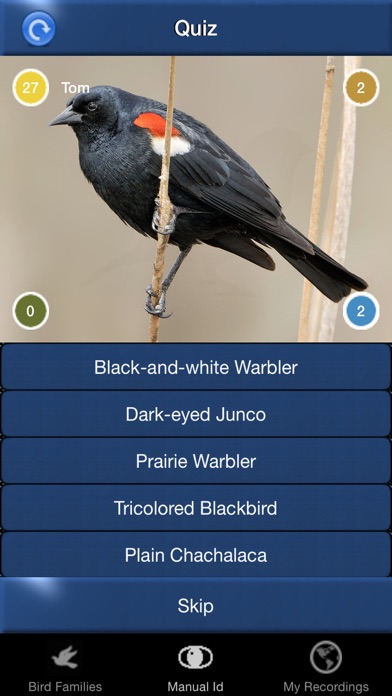 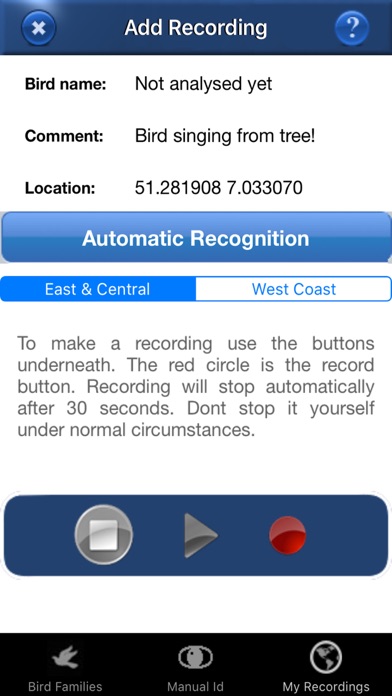 There are no plain chacalaccas in New Jersey

This is bad software
By Jabberwocky45

I bought this to identify my backyard birds from their songs, and for that purpose this app is a complete waste of money; it has yet to accurately identify a single bird song from my recordings. The app complains that the quality of my recordings is poor and it seems unless the bird is singing directly into your phone this will be the case, because even if it’s just the one bird singing fairly loudly and no other background noise, my recording is still not good enough. There is no way to edit your recording to cut out extra birds, and even their own recorded examples will sometimes have extraneous birds chiming in so you don’t know what you’re supposed to be hearing. The manual ID feature is a joke; I’ve gotten wide-ranging suggestions from owl to heron to sparrow for a single entry. I don’t know how they come up with their percentage accuracy but these too are a joke because they are wildly inaccurate. I also know that some birds have multiple calls/songs but the app does not give more than one of each. Don’t waste your money on this one.
By Clark02176

When you are able to get a good ID it’s great, however it’s very few and far between. There cannot be any background noise at all otherwise you’ll get a poor recording error, which fir me seems to be most of the time. I’ve also noticed it favors certain birds, tho if you listen to their songs they sound nothing like the bird I’m hearing whatsoever.
By Mmf5153

As consistent as bird sings tend to be, and with apps like SoundHound able to pick out and match even obscure tunes, you would figure that someone would develop an app to identify birds. Well, worry no more: if it exists, this isn’t it! BirdSongID is so picky about the quality of recordings to the point where they certainly can’t be blamed for failing to identify even the most basic bird calls. Record for a minute and it’ll warn you you need to record for thirty seconds. And short of crawling up in the tree and being right next to the bird, it will tell you your recording quality is poor. Its ability to discriminate bird songs from one another is non-existent. Don’t bother with this app: it’s a waste of both time and money.
By Closet0taku

It is correct the majority of the time
By Johnny Player

Great images but hard to get my recordings identified. Also not sure how to do the quiz. The prerecorded calls and songs are very clear and helpful.
By sc nadine

This app has never identified a bird for me. It always says the recording isn’t good enough. For this to work you would need to be right beneath the bird, record it for 30 seconds, without any other bird noises. That isn’t realistic.
By C birds

I am not at all satisfied with this app. I have followed your directions. It’s just not working as I expected. Please refund my money. Stella McDonald. Smyrna TN
By munnie716

The apps record button no longer works. Privacy settings were set accordingly to allow this app access. When I bought it 3 seasons ago, it worked fine. Now, when the record button is pushed, it idles and times out. Last update was 2 years ago. The developers aren’t maintaining it. Nothing. Useless. Very unhappy as I paid $10 for this defunct app.
By mifmis

All Birds Trinidad and Tobago - a field guide

All Birds Northern South America - a field guide to all the species recorded in Ecuador, Colombia, Guiana, Peru, Venezuela