Is It Vegan is a tool for anyone interested in eliminating animal products from their diet. Simply scan the UPC bar code on the package of any food or beverage product, and you'll see: Whether the product is vegan, vegetarian, or neither. A summary classifying the list of ingredients. A detail list showing which ingredients are vegan, vegetarian, non-vegetarian, etc. And the original (unclassified) list of ingredients for the product. After putting each ingredient into a category, Is It Vegan then decides whether the product is suitable for a vegan or vegetarian diet. Is It Vegan has information on hundreds of thousands of food and beverage products and verifies each of them using a master list containing thousands of pre-classified ingredients. Users now have the option to upload products, making our database larger than ever! Notice: Data on products outside the USA is extremely limited at this time. For best results, please scan food products from the USA. iOS 6.0+ is required to use this app! *Unfortunately we cannot control the ads that are being displayed, but 25% of the ad revenue will be donated to animal rights organizations* 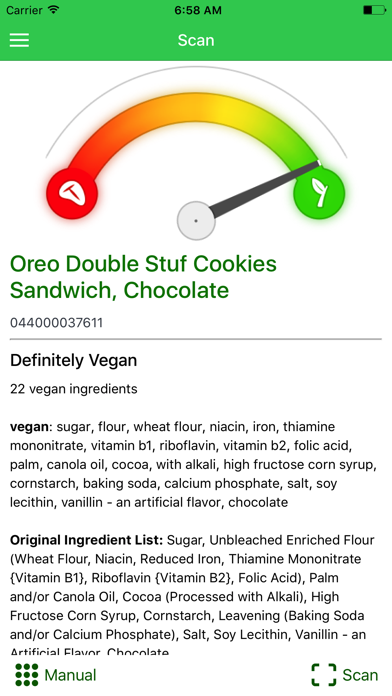 Used to work well, now it never works for anything I scan... yet you still think I’m going to watch an ad
By dioneWTF

EDIT BELOW, DISREGARD PREVIOUS STUFF (Previous: Pretty OK, wish it had an option to remove ads)

Like seriously, I’d pay good money (not subscription but still) to get the ads off. Um it can’t even tell that UPC 206438000005, otherwise literally known as ham steak, is meat. Yeah no.
By 2003cupcakes

This is the result of 2/3 of the items I scan.
By Cheezwit

Wow, this app has changed (and not for the better).

I used this back in 2014 and it was amazing. Pretty much every food you scanned was found and there were not pop up ad. Now, every single time you scan something it pops up with an ad. And the thing is, out of the 3 items I was attempting to search, none of them were loaded. I immediately deleted it. What a disappointment because I remember how great this app was!
By CGAF9615

Every single click triggers an ad. With sound. Unacceptably loud. And then it crashes... I can't use it
By Christy bbvvbbvvbbvvbv

I have scanned many items that are vegan, and it says it’s not. The ingredient list on the app is not the same as the one on the food. It just isn’t good.
By globug1109

I haven’t found a bar code yet that works for it... not a single food at Trader Joe’s I scanned, even obvious non vegan ones
By ksjfjhrbwbanogna

It use to be ok as it needed improvement. But now it doesn’t work for me at all. I had even bought it when it first came out. It worked much better when you purchased it. But now it doesn’t work, I keep getting invalid barcode message. Also I’m getting ad’s now, I paid for it so I shouldn’t be getting ad’s. So yeah it disappointing and I don’t recommend this app as it just seems easier to look it up the regular way. They really need to keep up to date with the newer technology. It was a nice idea but poor execution.
By Meow Y

Great concept, only get spinning loading circle of death when trying to find anything within app.
By appuser1207

I share this app with my vegan (plant-based) friends to make shopping easier and faster for them. Not every product is represented in the app, of course, but many are. I use it several times each trip to the grocery store.
By LorineNiedecker