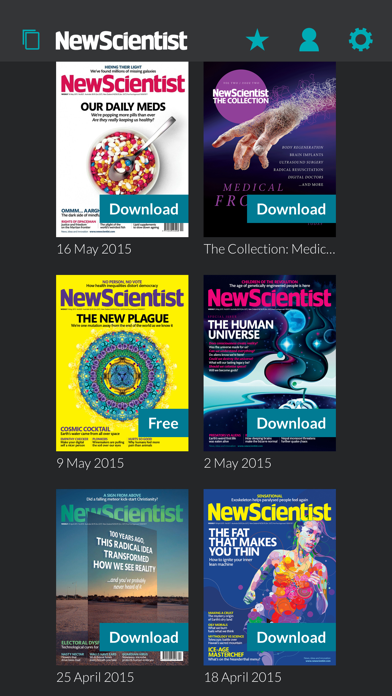 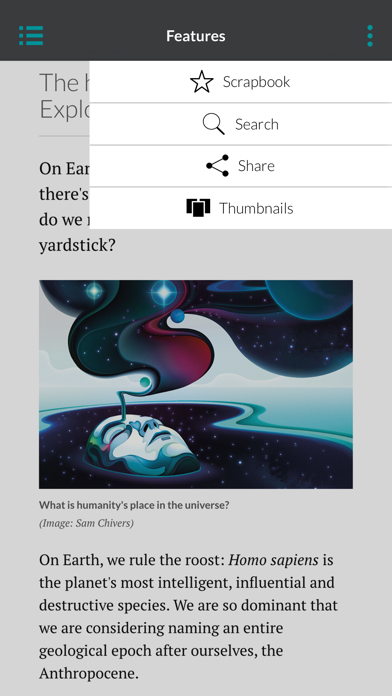 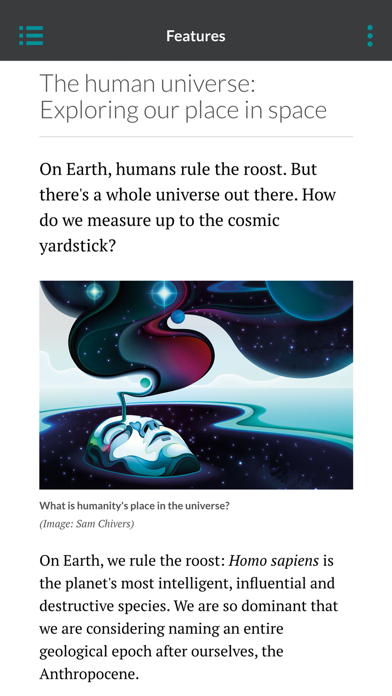 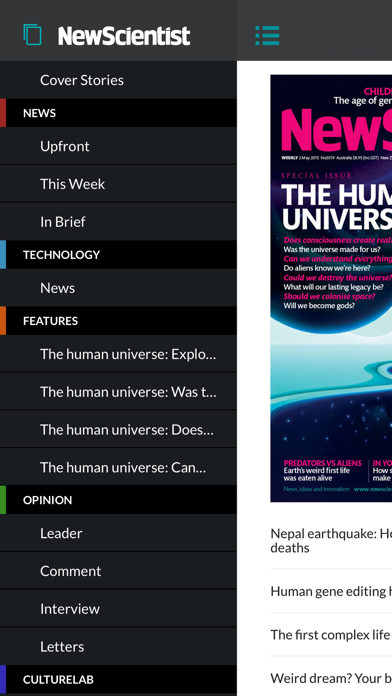 Great way to get New Scientist except...

The app functions well enough but Google ads appear at the bottom of the screen, covering magazine content unless wi-fi is turned off. I don’t know if New Scientist is making money by agreeing to allow Google ads or if Google if doing this without permission. I can’t give a good rating on this ap since the ads cover content and there doesn’t seem to be any way of stopping them from covering content (reporting that that ad covers content does not stop the content from being covered).
By b2blueb2

App makes it hard to finish reading an article

If you are half way through an article or issue and want to return to reading it at a later point, the app kicks you out and you have to hunt for where you left off. Otherwise the app works ok
By Bk111111

Watch out for your money and your old issues..

The app took my money when my subscription renewed but it refused to recognize that I had paid. I couldn’t restore purchases because the app would not recognize me. Thirty days later with no relief, I contacted Apple. (An excruciatingly painful process) Apple gave me no options other than to push through a credit to my credit card - which they did. But it’s worse than that. Every issue that I had not gotten around to downloading when I was a subscriber wants $4.99 now so I can read it. So - New Scientist magazine has ripped me off. While I was a subscriber I thought the app was a just bad joke - as you already you, or so you will realize - but I read the magazine anyway because I really liked it. Now I’m convinced this app is dangerous, both to ones’ mental health and wallet.
By Gt12fyi3

Every four or five months this app just decides that I need to subscribe, despite the fact that my subscription is paid by automatic debit. And then Customer Support is willing but clueless. Try this, try that, try it again. How about, you fix the app so it works!
By Boobootrink

Happy holiday season you run a publication even an old fart like I understand and enjoy. Keep up going.
By 75yearold df

It’s a Love this magazine and although I have subscribed to a plethora of magazines in my life this is the only one I have kept. Every time it would expire I would find myself perturbed when it wasn't in the mail box. And with the app, I can read it on my phone so the kids can page through the hard copy. I was always asking them, "where's the new scientist" and would have to dig it out of their room, or search the car, now I don't have to.
By Lofotan

Stay on top of the latest science news

New Scientist is a trustworthy source of the newest scientific developments. Well-written prose condenses sometimes challenging scientific and technical information from a wide variety of fields into understandable articles.
By Jimlambert

I love to read the content of the magazine provided. But one small thing I like to point it out for the app. Every time I open the app, it is jumping to the homepage but not the place I read before I recently quit. Is it possible that I can go to the place where I stopped? Thank you.
By weii ye

No user friendly. 10 year old could make a better app. Disappointing.
By Bumprunningsharkboy

New Scientist is by far the best general science publication for an educated person to stay informed of developments in all the major areas. The articles are beautifully written.The App for iPad is very user friendly.
By NJ Gymrat