The Oxford Dictionary of English is widely accepted as one of the highest authorities in the study and reference of the English language globally, with more than 150 years of research into it. Regarded as one of the flagship products in Oxford University Press catalog of dictionaries, the app features advanced search, lookup and learning tools designed by a vastly experienced developer. WHAT MAKES OXFORD DICTIONARY OF ENGLISH BETTER THAN OTHER DICTIONARIES?  • The very latest vocabulary, 2018 edition, with over 350,000 words, phrases and meanings.  • Tens of thousands of regionally specific entries reflecting the unique richness and global adaptability of the English language.  • The strength of The Oxford English Corpus' research excellence, directly placed at your fingertips.  • 75,000 audio pronunciations of both common and rare words, including those with varying pronunciations. This app is tailored to professionals, students, and academics alike, as well as anyone who needs a comprehensive and authoritative dictionary of current English at work or at home. LATEST APP UPDАТES:  • Learn in style with any of the four colorful new themes – the colorful layout will turn your learning experience into an enjoyable routine. Customize your dictionary and benefit from the cheerful mood your favorite color brings you.  • Dive right into the intricacies of the language - with a new and convenient Home page, sleeker and more intuitive visual layout, as well as innovations in the speed of searches - you can now get to the desired entry faster than ever.  • Translate and learn as you speak with Talk & Translate – use this speech recognition & text-to-speech app by downloading it for Free from the App Store. The great synergy between the two apps will help you optimize your studies. SEARCH TOOLS - quickly find words with the functional, clean and easy-to-use interface. Designed to provide the most comprehensive search experience, the dictionary combines several search tools to match or predict what are you looking for, including:  • Search autocomplete helps you find words quickly by displaying predictions as you type.  • Keyword lookup allows you to search within compound words and phrases.  • Camera search looks up words in the camera viewfinder and displays results in seconds.  • Voice search helps you find an entry using your speech.  • Automatic ‘Fuzzy filter’ that corrects word spelling and a ‘Wild card’ that allows you to replace a letter or entire parts of a word with '*' or '?' when you don’t know how it`s spelled. LEARNING TOOLS - engaging features that help you further enhance your vocabulary. Designed to give you the freedom to structure your studies, this dictionary combines several learning tools to help you be more organized:  • ‘Favorites’ that allow you to create custom folders with lists of words.  • Recent list which helps you to easily review looked-up words.  • Swipe-to-delete functionality in the Recent and Favorites menus.  • Word-of-the-day option to teach you a new word every day. Feel excited by the new word or definition you just learned? Share your discovery with friends on social media, email or any other option available on your device. 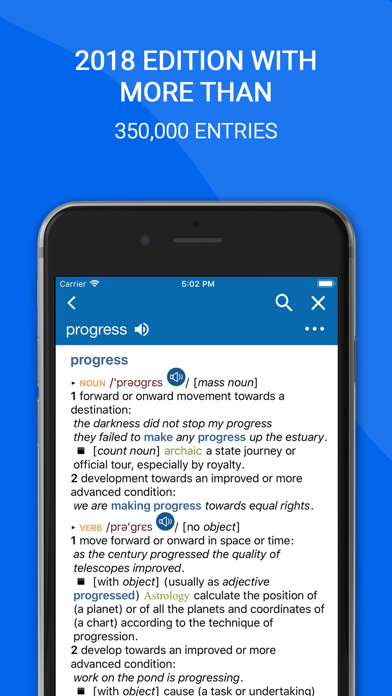 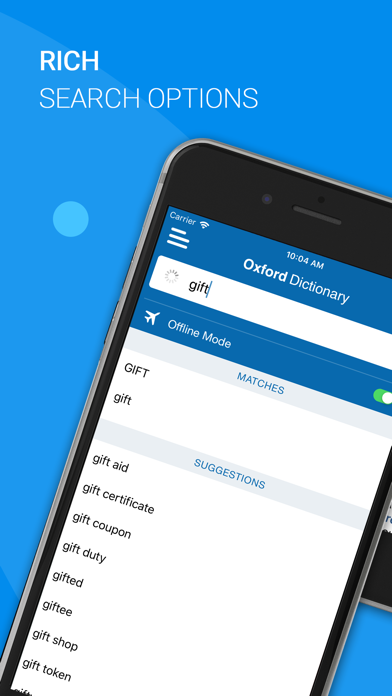 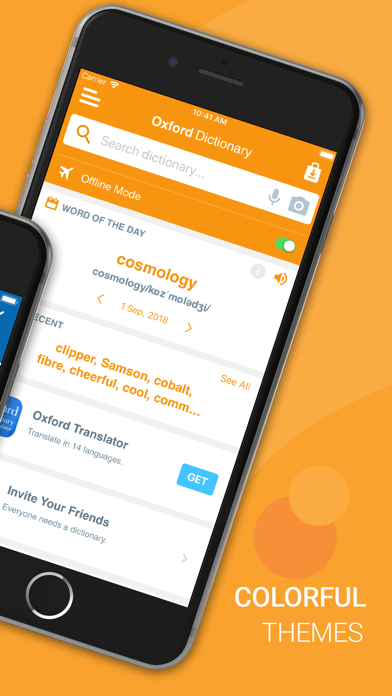 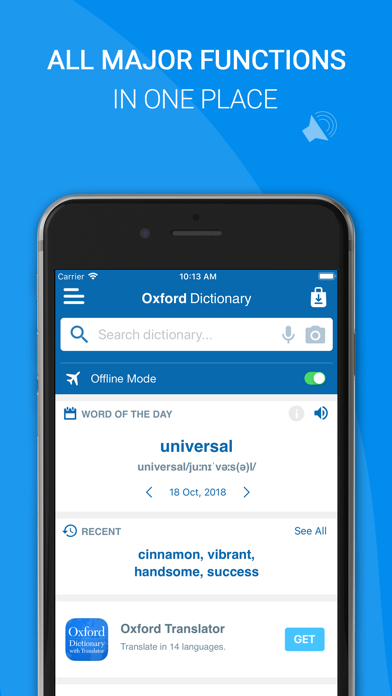 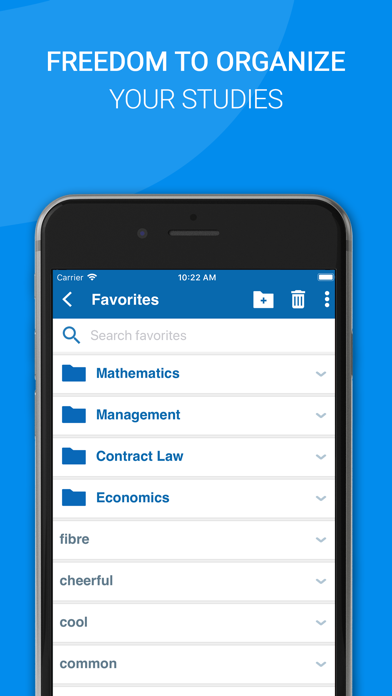 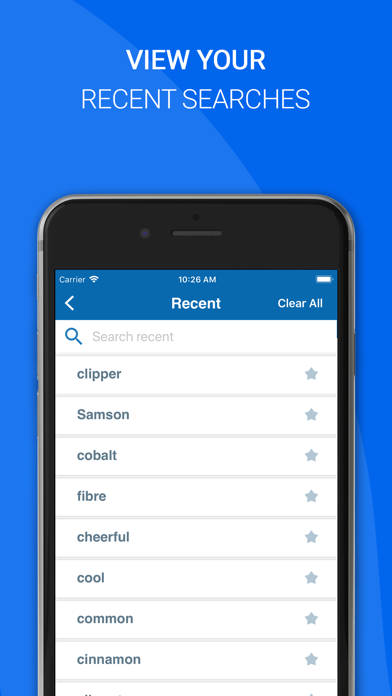 Makes life easier with accurate communication. Magna est veritas. I agree, Americans for the most part have lost the beauty of speaking and writing their Mother language, not to their fault but to the fault separation and no historical context; after all Americans are only a little over 200 years old. Little Leo
By Magna est veritas

Oxford dictionary does it all

Easy to use. Lots of features.
By Mactallica

When I open the app, I hate how long the developers make you look at the title screen. They must think that it is a good advertisement but it is very annoying. Dictionary otherwise ok.
By Reb1434

I am now 81 years old, and old retired professor at Yale and by God’s grace am alert mentally and stay academically active. I was brought up hearing my Dad tell me over and over again, that the Oxford dictionary was THE final arbiter for all disputes, where the English language was concerned. It was ingrained in me. So this review is written with an element of bias. One of my high school teachers often mentioned that a person’s intelligence could, very subtly, be assessed by the physical condition of his or her dictionary. If it was pristine and looked like it could fetch a good price at a book store, then very likely there was not too much to envy in the mind of the possessor of that lexicon. My Oxford dictionaries, one at work and the other at home, were in tatters even by the time I was in my forties. Then, some years ago I stumbled into the Oxford for my iPhone. Now my dictionaries on my book shelves could look unopened had they not been used before. I am totally dependent on my mobile phone now, not because of the phone, but because of my dictionary. 5 stars all the way! Cyrus Kapadia
By Cyrus the Small

Great for help in word searches and original orig and meaning.
By vbd777

For the price I expected more customization. For example, I created several folders to store words, but when adding a word to a saved folder, I’m only able to save it to favorites, I then have to go to the favorites folder and move the words to the proper folder. Given technological advancement of apps and folder organization, and again, the high price of this app, I expected a bit more
By SirDaniel73

Haven’t had any issues. Similar to the dictionary pre-loaded on (American) Macs (NOAD). As an American (and lover of dictionaries), I enjoy the various subtle and less subtle differences.
By Dmhdkdjcn

The official guide to the English language

As an American who attended Oxford University—particularly at Samuel Johnson’s Pembroke College—this dictionary has been for me the authoritative reference on papers, reports, and theses all of my adult life.
By Papa-Roy